In life being confident is important. However, Kamidere take it to a completely different level. Here are 10 that set the standard for what it means to be Kamidere.

The anime world is full of “deres.” There is the ever popular Tsundere, the Yandere or the Dandere. Although there is nothing quite like a Kamidere, or a character with a God complex. This type of character believes their world view is absolute, and will disregard any constraints placed on them by society that doesn't mesh with their own goals. They also firmly believe that they are correct 100% of the time, even when presented with evidence to the contrary.

Ultimately, Kamidere are viewed as arrogant. However, that doesn’t stop them from being memorable and enjoyable. The following ten characters are the best display of what it is to be a true Kamidere. “This world is rotten, and those who are making it rot deserve to die. Someone has to do it, so why not me?” – Light Yagami

One of the things that sets Light apart from non-Kamidere characters who are gifted with extraordinary powers is that he puts them to use right away, killing off criminals as he deems necessary. Most others would hesitate, but not Light, because he believes he is smarter and has a better moral compass than anyone else. While intelligent and gifted, his Kamidere personality takes it to a level where he thinks he is untouchable.

No one likes criminals, but an average person believes in the justice system taking care of these individuals. However, Light wants to dish out the justice on his own terms. The police become involved as they look to put a stop to all of the deaths, but Light continues to kill people off as the world begins to to take shape in his image. "Destruction is necessary before creation. So, anything that may make my heart waver from that should be swept away." – Lelouch Lamperouge

Lelouch is another intelligent kid to be given a power that inflates his sense of self. He will use the power he receives to score military victories for the resistance, but this only aggrandizes his alter-ego, Zero. While he is helping the resistance during this process, he only does so to stick it to his father who sent him off to Japan in the first place. He also shows a willingness to make questionable decisions, so long as it helps him accomplish his goals.

During battles Lelouch feels he is above the opposition, which makes sense considering his god-like analytical abilties. Unfortunately, this leads to many close calls, and his hubris costs the resistance many lives. Such is the path of a Kamidere. "When you see an insect lying on the ground, do you stop to consider it a fool? The life of an insect is so beneath you that it would be a waste of your time to even consider judging it. That would be an accurate summation of my feelings towards you humans." – Father

Father is the original Homunculus and developed his Kamidere disposition while he was known as the Dwarf in the Flask. He believes that humans only serve one purpose, being tools at his disposal in his quest for power. His ultimate goal is to become a perfect being, one that is superior to humanity. Even his own “children” aren’t safe from his whims, as he is fully prepared to use them in whatever fashion he feels is appropriate. ''Fear is freedom! Subjugation is liberation! Contradiction is truth! Those are the facts of this world. And you will all surrender to them, you pigs in human clothing!” - Satsuki Kiryuuin

She is the student council president of Honnouji Academy, and she rules the school with an iron fist. If anyone steps out of line, then they are put right back into place by one of her loyal followers. If one of them fails, then they are also subject to her wrath. Even the town that surrounds the school falls under her domain. “I wanted nothing more than to create that castle, a different world transcending the laws and boundaries of the real world.” – Akihiko Kayaba

In this case actions speak louder than words. Akihiko appears a few times in the world of Sword Art Online, but he is not as boisterous as some of the other characters on this list. What is obvious is that he felt that it was perfectly normal to trap thousands of people in a world and game he created. On top of that he decided that any player who died within the game also deserved to die in the real world.

While at the end of the show he is portrayed in a rather benign manner, his callous disregard for human life is what lands him a spot on this list. 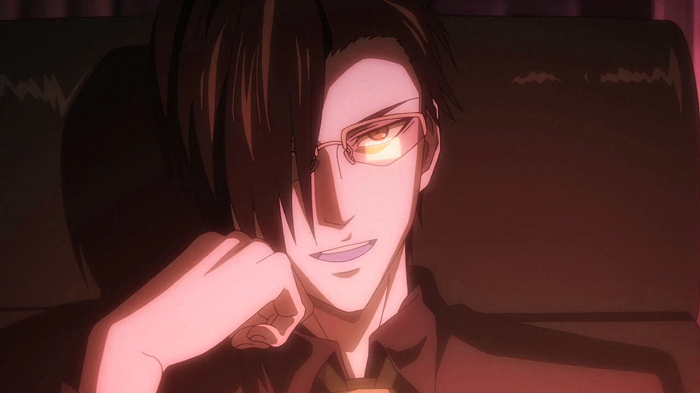 "Cretins who think they don't need to evolve... have no right to pass on their genes!" – Doctor Genus

Genus is a scientist who grew up with a disdain for those around him. He felt that they were all inferior, and that humanity in general needed to go further down the evolutionary chain. He even went so far as to create his own organization called the House of Evolution. It is here where he toyed with life to create creatures that he felt were worthy successors to humanity. He would then test his creation’s abilities by having them attack heroes.

His most notable achievements are creating Ashura Cabuto, as well as creating a horde of clones - because he could only tolerate being around someone as great as himself. From: The Big O “Yes. Of course. Power must be demonstrated to the ignorant.” – Alex Rosewater

In a world of haves and have nots, Alex Rosewater has a lot. However, his overwhelming wealth and power have corrupted him. He views the poor of Paradigm city with disdain, even enjoying some of the disasters that strike the city because it means the poor are suffering. Being the top dog in the city is not enough for him, however.

His thirst for power grows as he takes control of some mechs, vowing to destroy those who he sees as being unfit for “his” world. “Mankind accepts that it cannot defeat natural disasters. And I am one of them.” – Enel

Enel is as cocky as they come. He has gained enormous amounts of power thanks to the devil fruit he consumes, which bolsters his ego enough to the point he believes he is immortal. With these powers he is able to dominate opponents, further inflating his ego. When he is not humiliating those who challenge him, he is spending time relaxing or enjoying his life as much as possible.

His attitude is not the only way he lets his Kamidere flag fly. The attire he selects successfully broadcasts the appearance of greatness. He wears gold jewelry on different parts of his body and has distinctive clothing. “I’m God, therefore I will have to grant your wish.” – Mio Isurugi

What do you get when you make a potent combination of Tsundere and Kamidere? Mio Isurugi! She thinks she is a deity, and lets others know about it by referring to herself as God during run-of-the-mill conversations. She frequently views it as her duty to help others and grant personal wishes because of her status as God. Even her irrational fear of cats does not make her re-think her stance on being the almighty. “I will show you that what you are doing is a waste of time!” – Terumi Afuro

A student of Zeus Junior High who also goes by the name of Aphrodi, Terumi Afuro is one heck of a Kamidere. As if his nickname and the school he goes to is not enough, he is also the captain of his school’s soccer team. They are one of the strongest teams in the country, which justifies his demeanor even more.

His status and skills lead to him dismissing other players. Even going to far as to randomly showing up at an opponents practice session to let them know it would be better if they just gave up instead of playing against his vaunted team.

Kamidere come in a range of different ages, have different motivations, and different methods of imposing their wills in their respective worlds. What does not change, though, is that they are always entertaining.