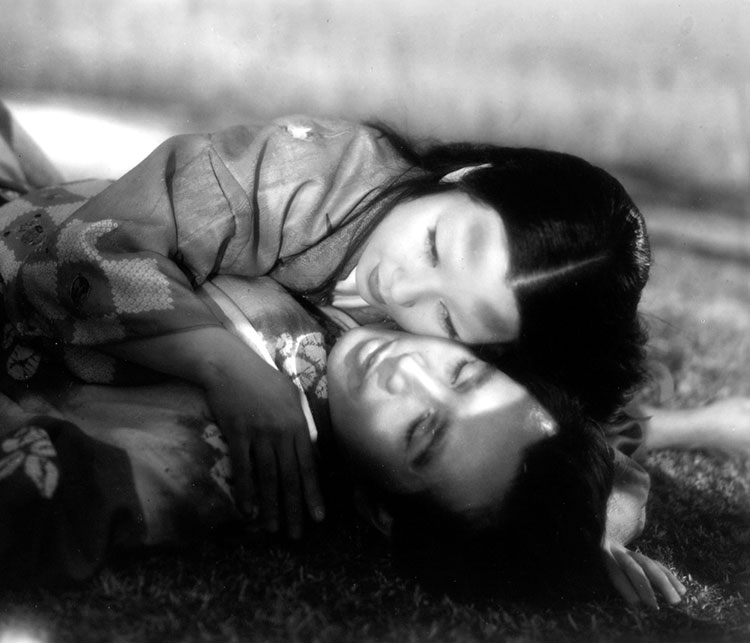 The history of Japanese cinema goes back to the silent era, but international audiences first started paying attention in 1950s, during the end of the American occupation of Japan. Of Japan's three most celebrated directors from this period, two of them started making films back in the silent era. Kenji Mizoguchi established early on the two major trademarks that would define him as a director: elaborate long takes and dramatic narratives focusing on the suffering of women.

Adapted from two separate short stories written in the Edo period by Ueda Akinari, Ugetsu combines the jidaigeki (historical film) genre, returning to popularity after the end of the occupation, and the ghost story. Less a horror film than a mournful tragedy, the film follows two men who in their carelessness and ambition abandon their wives during wartime. One is seduced by a mysterious noblewoman, the other cons his way into becoming a samurai. The film's elaborate cinematography resembles classical scroll paintings. Fans of atmospheric, melancholic fantasy series like Mushishi and Mononoke should find much to appreciate in Ugetsu.

Ugetsu is available on Hulu Plus 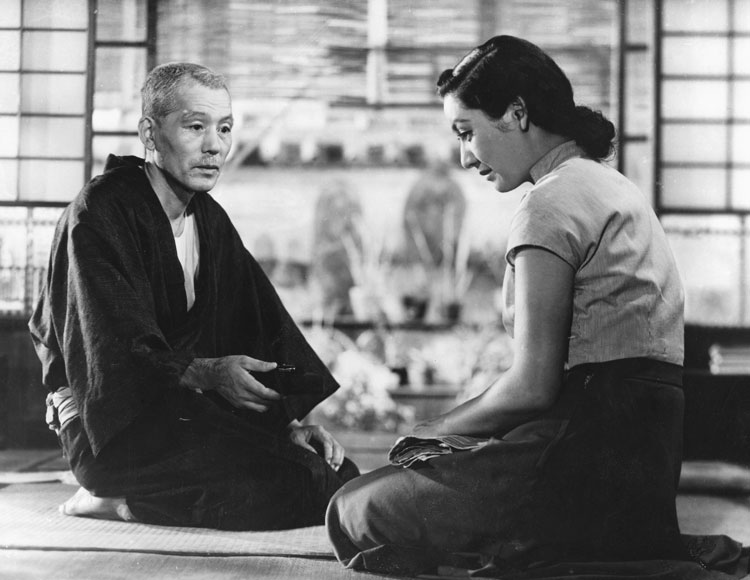 Ozu, like Mizoguchi, was a director with an affinity for slowness. Unlike Mizoguchi, whose camera was constantly moving, Ozu also embraced stillness. He developed a visual language unlike other directors, designing scenes so his actors would always face the camera when they talked. His films, mostly understated family dramas aside from a few comedies during the silent era, are considered arthouse fare in America but were actually quite mainstream in Japan. He made dozens of them, dealing with similar subject matter and directly remaking his own films on occasion.

Tokyo Story is his most praised film, and one of the most praised of all time. On the 2012 international Sight and Sound poll of filmmakers, it was ranked as #1 (it was #3 on the critics' poll, behind Vertigo and Citizen Kane). Why such praise for this one? Part of that is probably because it makes everyone cry. But how it goes about that is just as important. For such an emotional film, it avoids cheap emotional tricks, instead earning its power through detailed observation. The deceptively simple story of inter-generational strife holds universal appeal (it's inspired by the American film Make Way For Tomorrow) but holds specific resonance in its depiction of a rapidly-changing mid-20th century Japan. Lead actress Setsuko Hara, who starred in multiple Ozu films, would inspire the main character Chiyoko in Millenium Actress. Ozu's closest match in the anime world would probably be Isao Takahata, particularly in his Only Yesterday realist mode.

Tokyo Story is available on Hulu Plus 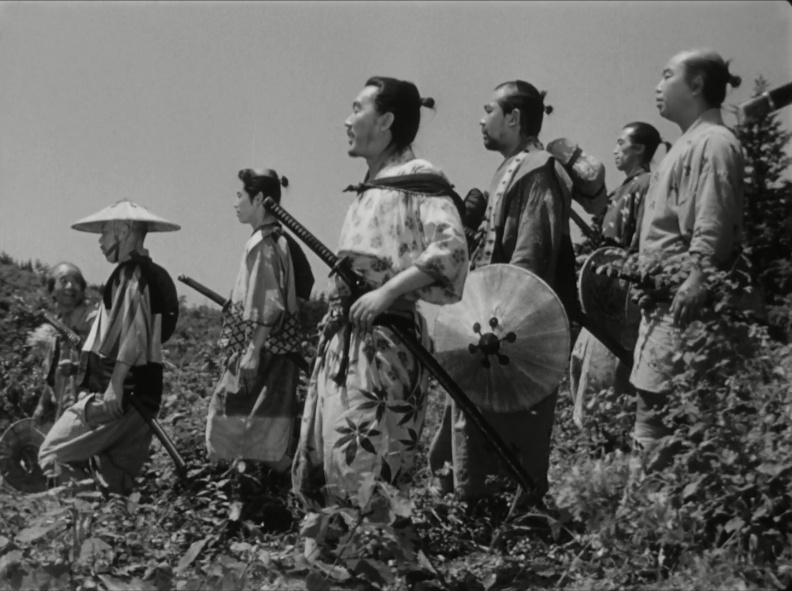 Picking just one Kurosawa film to talk about is a challenge. Do you go with Rashomon, the tale of dueling perspectives that launched him to international stardom? His masterful Shakespeare adaptations like Ran and Throne of Blood? What about the direct inspirations for Star Wars (The Hidden Fortress) or A Fistful of Dollars (Yojimbo)? It's pretty hard to go wrong with any of his films. But the best introduction to his work, to see just how artful and entertaining his films could be, might just be his legendary Seven Samurai. It's over three hours long and in black and white, yet I've seen people who claim they're not into "old movies" get swept up in it.

Kurosawa's considered the most "Western-style" of the famous Japanese directors, influenced by John Ford as much as kabuki. It's no surprise then that Seven Samurai's story of farmers assembling a team of warriors to fight off bandits has been remade multiple times in both the East (the anime Samurai 7) and West (the classic Western The Magnificent Seven). Nothing beats the original, though. All seven samurai are distinct and lovable characters (Toshiro Mifune's wild Kikuchiyo is the best), the script keeps a sense of humor amidst the darkness, and the action scenes are ahead of what anyone else was doing in the 1950s. This is a movie everyone needs to see at some point.

The Seven Samurai is available on Hulu Plus 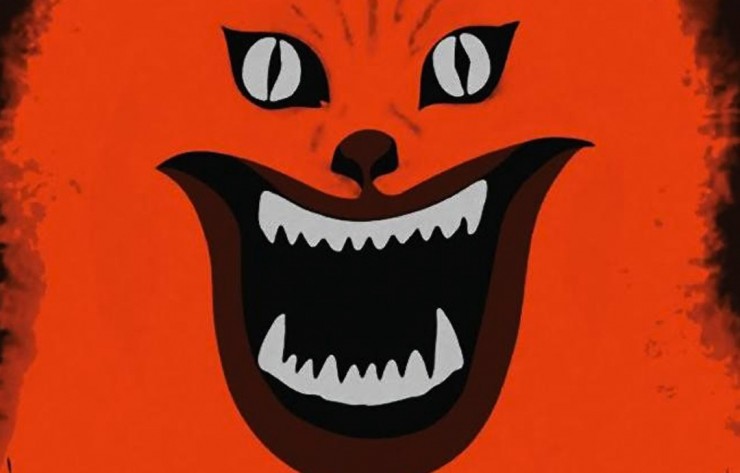 Want something weird? It doesn't get much weirder than House. Obayashi's an experimental filmmaker who made a name for himself inventing what we think of as the typical Japanese TV commercial style. His first feature film exists, weirdly enough, because of Jaws. The Toho studio wanted him to make a horror film in response to Spielberg's blockbuster. He decided the only way to make a truly original horror film was to take the perspective of a child, so he asked his pre-teen daughter what scared her. The answer: being killed by furniture, mostly.

Much more funny than scary, though a little unnerving in just how bizarre it gets, House follows a bunch of way-too-cheerful schoolgirls (with names like "Sweet", "Melody", and "Kung Fu") who stay at a haunted house and get killed off one by one in utterly bizarre ways. Killer pianos, evil cats, and a fight between watermelons and bananas are all involved. The special effects are delightfully amateur, resembling a manga come to life in their flat cartoonishness. Fans of Jojo's Bizarre Adventure, FLCL, and other delightfully WTF anime might have a new favorite movie after experiencing this.

House is available on Hulu Plus 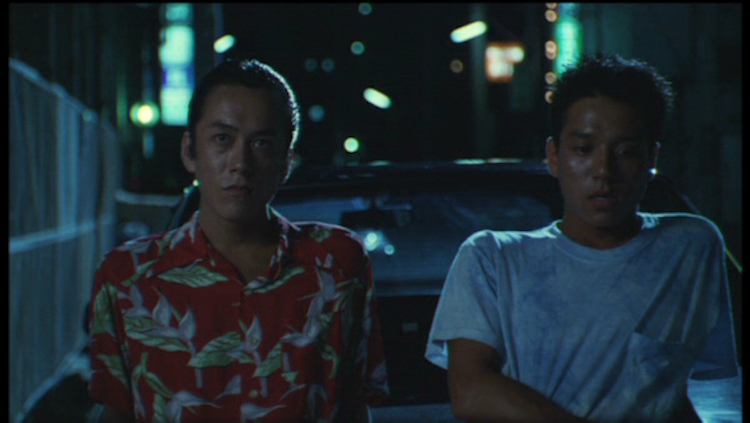 Takeshi Kitano, also known by his stage name Beat Takeshi, is a director, a comedian, and an actor (he also stars in the next film on this list). Unexpected for a comedian, his directorial work tends towards violent yakuza dramas, yet within this genre he manages to retain something of his bleakly comedic sensibility. They also have a ring of authenticity to them; while not in the yakuza himself, he has gone on record about dealings with organized crime, something he describes as common in all industries in Japan. Sonatine failed in Japanese theaters but was a break-out hit on the international film festival circuit, making his name known worldwide.

Sonatine stands out for the way it defies expectations. The first half hour seems like a pretty typical gang war film, suspenseful but not particularly memorable. What elevates the film is its second act, where the focus shifts to small group of survivors from rival gangs who befriend each other. When the action gets going again towards the end, the relaxed time spent hanging out and fooling around with the characters makes it all the more poignant. Come for the guns and explosions, stay for the beach-side dancing and sumo wrestling. Joe Hisaishi of Ghibli fame did the score. Kitano oddly enough hates Ghibli's films and anime in general (he also hates computers, yet thinks Twitter's OK; figure that one out), but don't let his questionable taste stop you from enjoying his work, especially if you appreciate seinen action series like Black Lagoon and Baccano. 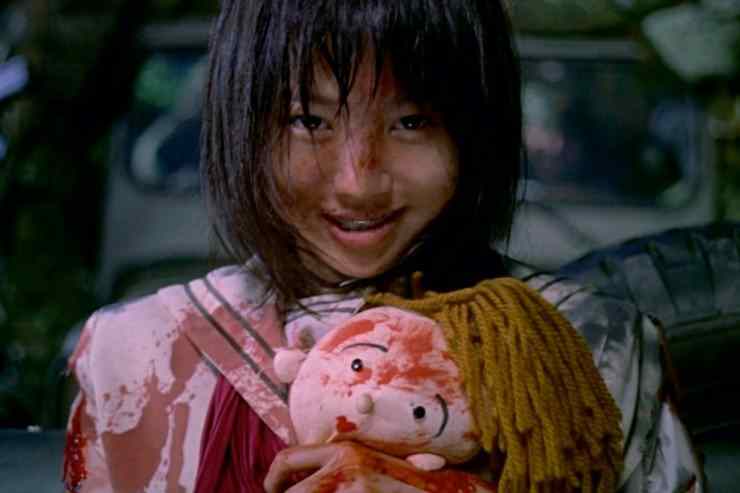 Manga fans might remember the manga adaptation of Koushun Takami's 1999 novel Battle Royale. Others have probably heard of the novel and Fukasatsu's film in comparisons to The Hunger Games. It's Quentin Tarantino's favorite film of the past 25 years, for reasons that are exceedingly obvious to anyone familiar with both Tarantino and Battle Royale. American studios wouldn't touch it for years; the premise of kids being forced to kill each other seemed unthinkable for a commercial release in a post-Columbine world (Anchor Bay got the rights in 2012 after Hunger Games made the premise marketable).

Fukasatsu was drafted into World War II at 15 years old, and the perspective that brought him, seeing those in authority bend the younger generation towards violence, informed all of his films. He made a name for himself directing gritty yakuza pictures in the '70s (Battles Without Honor and Humanity was a big one). Battle Royale was his final film, released when he was 69, yet in its anger and immediacy, it feels like a much younger man's work. It loses some of the detail of the book's dystopian politics but makes up for it in visceral thrills. Series like Future Diary and Dangan Ronpa have borrowed tropes from it. Definitely not for the squeamish, though not the most gory film Japan's put out (be glad I'm not recommending Takeshi Miike's Audition). 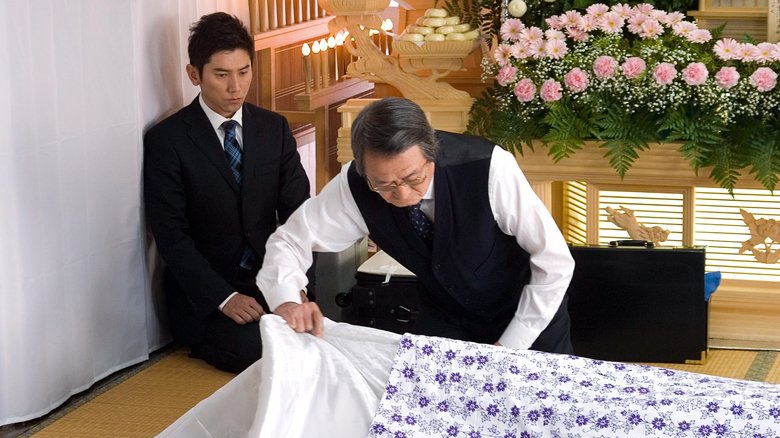 Japanese cinema finds itself in a period of transition in the 21st century. The increased affordability of digital effects has led studios to focus their efforts on competing with Hollywood blockbusters, resulting in more populist, artistically conservative fare (think of most of the live-action anime adaptations we've been seeing lately). Yet riskier artistic films still occasionally make their way into the Japanese studio system. One such success story is Departures, which took ten years to get produced but won the Academy Award for Best Foreign Language Film. It's the most recently released film to have been added to the late great Roger Ebert's "Great Movies" collection.

Why did it take so long to get this movie made? The main issue was the film's unusual premise: an cellist seeking employment accidentally finds himself working as a mortician. Social taboos against people who deal with death made it a tough sell. The same taboos also provide much of the film's drama. The odd subject matter may have actually been a selling point for the Academy: to Western audiences unfamiliar with Japanese burial practices, the film can be educational as well as beautiful and entertaining. And yes, it is entertaining! While treating its subject matter with the utmost respect, the film maintains appropriate comic relief and never feels too heavy. It's hard to compare the film to popular anime (shows like Shigofumi deal with similar themes of death but from a fantastic as opposed to realistic point of view), though Joe Hisaishi does the score, and Akira Saso wrote a manga adaptation to promote it.

Departures is available on Hulu Plus