Henshin a go go baby! Transformation is a staple in many genres of anime, from fighting to magical girl. The sacred rule of transformation is that no other character is allowed is interrupt while you power up to your next form, so of course you want to make things spiffy with a henshin sequence.

What is your favorite transformation in anime? 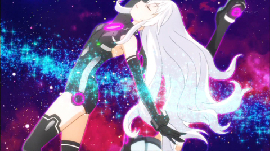 Here are 15 of the most epic anime transformation sequences!

Digimon is loaded with transformations, as the concept of the Digimon characters Digivolving to stronger forms is one of the key concepts of the franchise. Some of these henshin sequences were sped up or at least cut shorter, particularly in later seasons, but the original Digimon Adventure is notorious for using Digivolution of multiple Digimon to fill space and hit that precious 20 minute mark for each episode.

Dragon Ball Z is littered with transformations, with almost every character being capable of transforming throughout the entire series. Of all these transformations the most radical is when main character Gokuu becomes a Super Saiyan 3 for the first time, whose increase in power is so great just his transforming literally shakes the Earth and takes a full 5 minutes of screen time.

Perhaps the most iconic of any transformation is the character cast of the original Sailor Moon. Like Digimon, Sailor Moon is iconic for reusing the exact same transformation sequence throughout a variety of episodes. Later seasons add a bit more substance to the transformations, but be prepared to watch these a lot whenever binge watching this classic anime.

Yuugi Mutou was a normal, albeit very short, student until his archeologist grandfather gave him a mysterious puzzle found in an ancient ruin. Upon assembling this Millennium Puzzle, the young Yuugi found himself sharing his body with the ancient spirit of a nameless pharaoh. When the pharaoh takes over and becomes Yami Yuugi he grows much taller and his voice changes, both of which are facts that no one else seems to notice.

Not every transformation is a happy one. Sometimes transforming takes the power of friendship and causes you to defend the innocent, and other times it just turns you into a horrible rage monster. Thus is the case for Inuyasha, who occasionally loses control of his demonic powers and will attack anyone, friend or foe, who gets in his way. As his rage grows the transformation becomes harder to reverse and could even become permanent.

Tatakae! Chou Robot Seimeitai Transformers (known in the dub as Transformers: Generation One) is perhaps the most well recognized of any series involving robots. Following the 1980's boom of using cartoons as advertising for toys, this anime and several others became extremely popular. Oftentimes the toys of characters were developed before their anime debut, forcing animators to figure out how to make their image match the action figures.

A trope in and of itself is the gender bender. Many anime focus on a gender swap being an accident and embarrassment, but titular character Naruto found a way to weaponize this technique. Using the Sexy Jutsu to transform into an unclothed woman, he completely disables male opponents. This technique even has an upgrade, the Harem Jutsu, where he creates clones of himself and has them all transform at the same time.

One of the most iconic OVAs of its time, Tenchi Muyo! Ryououki features titular character Tenchi Masaki caught up in strange events involving space pirates of all things! Quickly thrown into political events and criminal activities of galactic proportions, Tenchi soon finds himself facing the most dangerous criminal in the galaxy, Kagoto. With his life and the lives of his friends on the line only the legendary power, the Wings of the Light Hawk, can save Tenchi!

Villains are just as capable of transforming as heroes, as is the case when Envy's true form is revealed. Normally taking the form of a human being, Envy's true power emerges as a giant, green lizard-like creature with hair whose skin sports the screaming, agonized faces of tortured souls.

Viewtiful Joe takes place in Movieland, another dimension where the events we view as movies are real. In this world any character with a V-Watch can become a superhero by shouting the words, “Henshin a go go baby!” When title character Joe chants these words he becomes the superhero Viewtiful Joe, who quests to rescue his abducted girlfriend from evil movie villains in this parody of classic henshin series.

Every Shinigami's sword has three states: Normal, Shikai, and Bankai. While the transformation from normal to Shikai is pretty bland and straightforward, the animators tend to kick things up a notch when transitioning to Bankai. Along with giving the user enough power to level buildings, Bankai often features a dramatic transformation of a Shinigami's sword and has a tendency to give them a nifty new outfit as well.

Prior to the reveal of this transformation, the Shining Gundam already had a "super mode" transformation. And while this previous upgrade was powerful, it merely used a fraction of the true Super Mode's potential and consequently its power paled in comparison. The transformation sequence strays from traditional mecha conventions, which generally just involve the robot changing shape, and is more along the lines of power-ups from anime in the late-80's and early-90's.

All manner of supernatural creatures are real in the world of Rosario to Vampire and vampires are considered to be the most powerful of them all. Moka Akashiya's power was so great that a seal was placed on her to limit her immense raw power. When the rosario is removed the cheerful and carefree pink-haired Moka disappears to make way for a cold, silver-haired demon.

Whereas the original Megaman could copy weapons from other Robot Masters, the digital based Megaman.EXE was bestowed with transformations. So, so many transformations. Style Change upgrades him for specific combat scenarios, Double Soul fuses him with other characters to gain their powers, Cross Fusion fuses him with his human partner to fight in the real world, and Beast Out gives him the power of giant animal monsters with world-ending capabilities. In terms of the sheer number of transformations it features, Rockman.EXE may outshine any other anime to date.

Anime really excels at finding creative ways to expand on seemingly limited superpowers, and few characters have demonstrated that quite as well as Luffy. After consuming a legendary Devil Fruit, he gains the ability the stretch his body like rubber. Seems pretty limited, right? But Luffy (and the writers) are pretty creative, and so he comes up with the new Gears technique. Second Gear allows him to increase his speed and strength by pumping his blood beyond what a normal human could handle. Third Gear pumps air into his arm to make it hit a lot harder, and Fourth Gear inflates his entire muscular system to give himself incredible super-strength.