Rumiko Takahashi's romantic comedy series Ranma 1/2 made a big splash when it was released in the 1980s. Following the adventures of Ranma Saotome, Akane Tendo, and all their friends (and enemies), the series delved into some strange martial arts abilities and powers. A big reoccurring theme that appears in the series is the dreaded cursed springs of Jusenkyo. This dangerous training ground in the wild of China is home to numerous springs filled with cursed waters. When submerged in these innocent looking springs, the poor victim would be in trouble over their heads. While they were fine going in, coming out they would take the form of whatever was the first thing to fall completely it the spring's waters. Forever cursed, they would take that form whenever splashed with cold water, only to return to their true selves when splashed with hot water. Everything from cats to ducks, all the way up to gods and horrible monsters, there were a lot of different ways the springs affected people. Want to know what kind of curses some of the characters in this series are saddled with? Read on and learn one of the central plots in this love story of a boy-who-turns-into-girl meets a girl is all about. 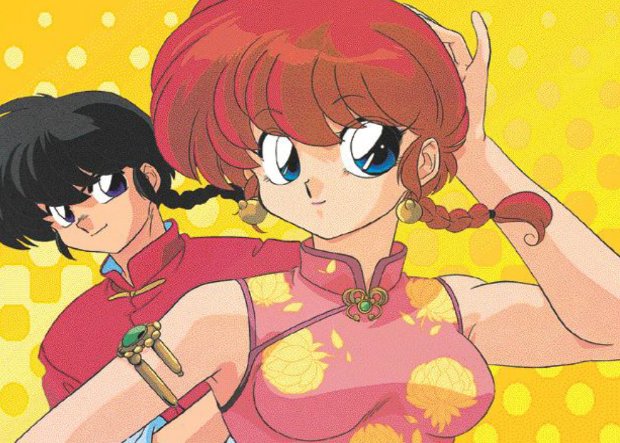 The most well-known of the cursed springs, thanks to titular character Ranma Saotome falling into the spring while training with his father. Ranma's cursed form is that of a short, red-haired girl. Even with the change, still keeps his abilities and has the same personality. The manga character Herb is also a victim of this curse.. He used the spring on a monkey so he could see what a nude woman looks like and in return, the monkey (in human form) splashed him with the water, and then used a special pail to lock him into his cursed form.

The coveted cure for many of those inflicted with Jusenkyo curses. Ranma and many of his friends keep trying to get to this spring so that they can be rid of the curses from the other springs. The waters from this spring also play a big part in the ending of the manga series. 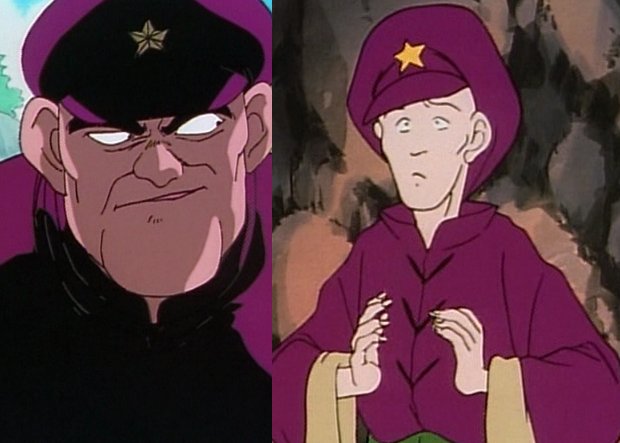 A spring that only is mentioned in the anime series. The character afflicted with this curse is Kinnii, a member of the Jusenkyo Preservation Society. He goes to capture Ranma, Genma, Shampoo, Mousse and Ryoga for "abusing" their cursed forms. However, when splashed with cold water, the strong and large fighter shrinks to a thin man who has no willingness to fight. 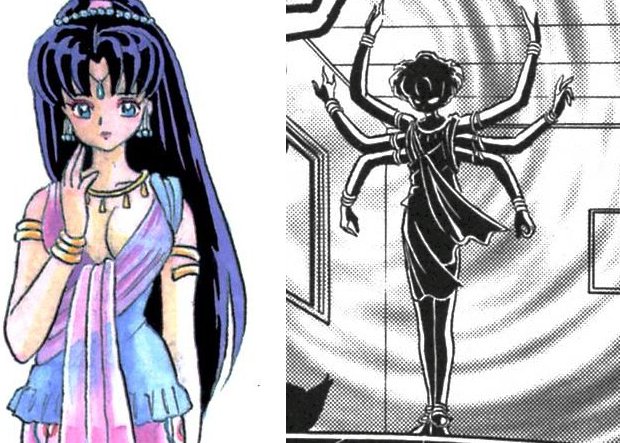 A spring only mentioned in the manga series, which cursed Rouge, a teenage girl looking for Pantyhose Taro. When splashed with cold water, the beautiful dark haired girl turns into a six armed, 3 headed goddess with immense power. When transformed the mild-mannered girl becomes very violent and destructive 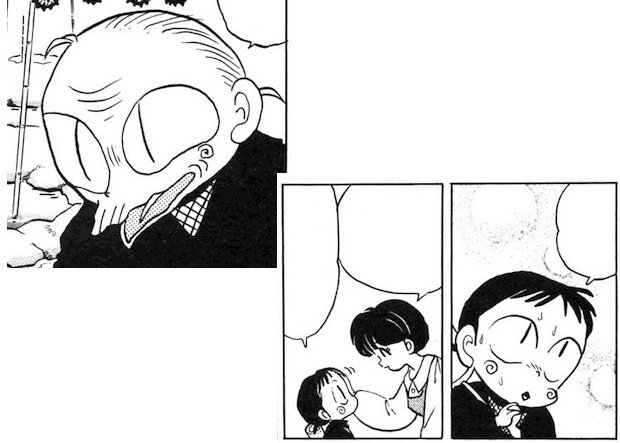 Another spring mentioned only in the manga. This curse was inflicted on Rakkyosai, an old friend of master Happosai. Rakkyosai fell into the spring while trying to retrieve the Brocade Butterfly. The curse turned him into an infant, and he had to wait several years before looking for Happosai again so that his cursed form could age enough to walk and speak.

Only mentioned in the manga, this spring will turn you into a very virtuous and upstanding man. No one seems to have been given this curse.

A spring from the manga series that seems to create duplicates of whatever falls into it. Although a few animals end up cursed, the only use on a human character in the series duplicated a bump on Happosai's head. 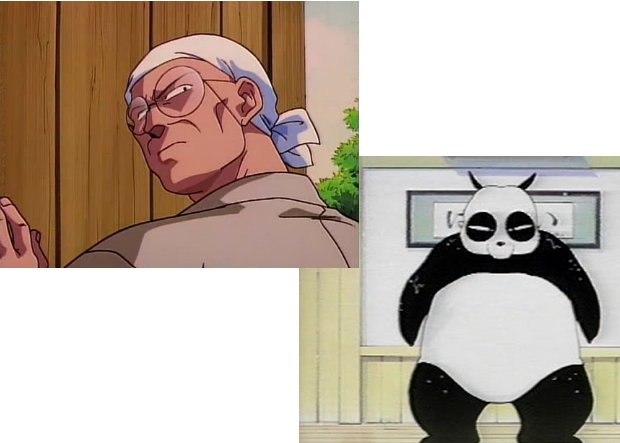 The spring that Ranma's father Genma fell into during their ill-fated training mission. When doused with cold water Genma instantly turns into a large panda. Genma takes his curse in his stride most of the time, using it to mooch free meals from Shampoo or Ukyo, or sitting around the Tendo house playing shogi. When in this form Genma loses the ability to speak. He uses wooden signs and markers to communicate in this form. 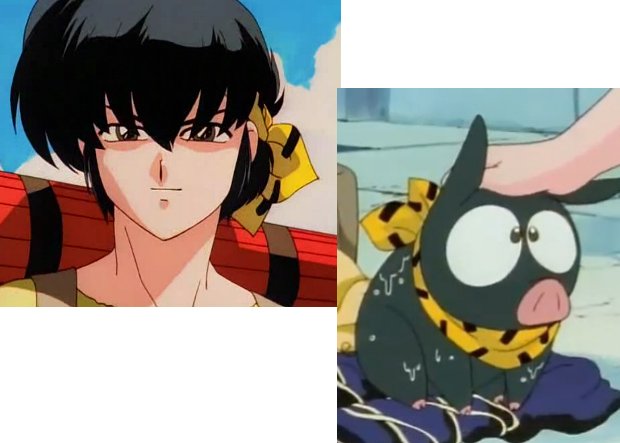 The curse that the eternally lost boy, Ryoga, is saddled with. Ryoga fell into the spring after tracking down his old junior high school rival to China. In a case of being at the wrong place at the wrong time, Ryoga was pushed off a cliff by Ranma is his female form and right into the spring. In his pig form (named P-chan by Akane as a pet) he was nearly cooked alive by the Jusenkyo spring guide before the hot water in the wok turned him back into a human. 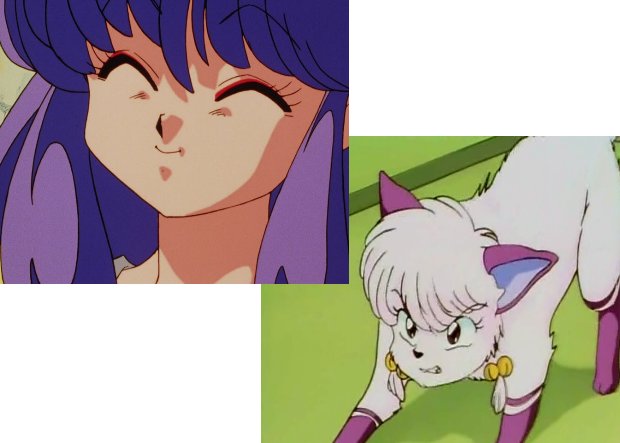 The spring that gave Shampoo the curse of turning into a cat. She received this curse after being bested by Ranma in Japan in their second fight. After her defeat Shampoo was trained at Jusenkyo by her great-grandmother Cologne and ended up falling in the spring. Shampoo eventually mailed herself to Japan in her cat form, only to find out Ranma has a severe phobia of cats. However, Shampoo often uses that to get back at Ranma if he does something to offend her. This spring is also mentioned in the Ranma video games as well. 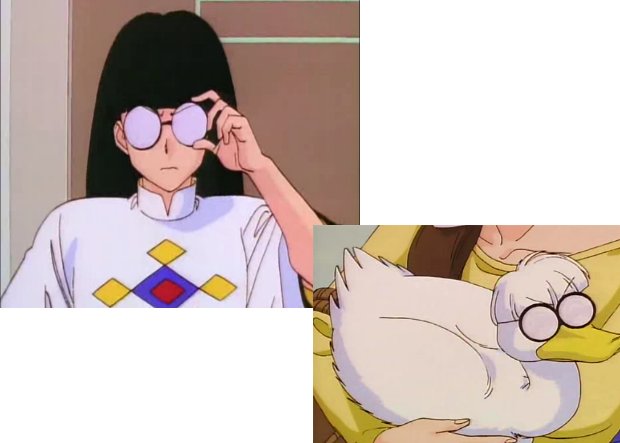 The fowlest of springs. The main victim of this spring was Mousse, who has such bad eyesight he walked right into the spring without knowing, being the first person to do so. Mousse's duck form is unusual as he retains both his glasses and his mastery of hidden weapons even in this form. Mousse also tried to use this spring's water as a weapon, nearly turning Akane into a duck, but ended up cursing a circus tiger.

The second of the springs that Pantyhose Taro encounters. Thought to be a cure for the curse he already had (that turned him into a monster combination of a minotaur-like creature with crane wings and an eel for a tail) it instead only added tentacles to his cursed form and gave him the ability to spray ink. 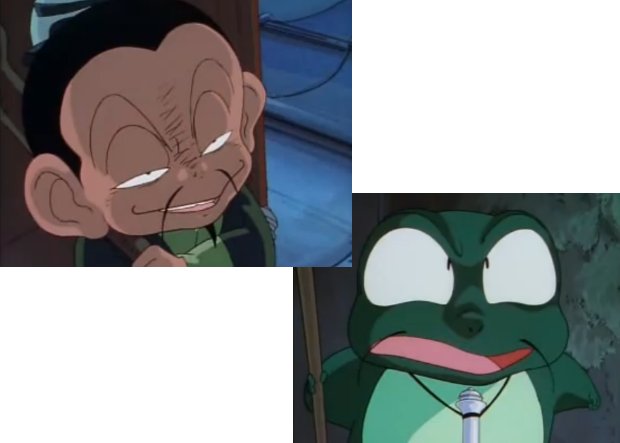 A cursed spring mentioned in the anime as it relates to the character of the Frog Hermit. The Frog Hermit is another character that befell a curse thanks of Genma and Ranma's recklessness in China, which fuels his desire for revenge against the two. Although his main weapon is his trained frogs, the Hermit also uses the water from this spring to try and turn Ranma into a frog as well.

Niuhōmanmaorennīchuan (Yeti riding a bull while holding an eel and crane) 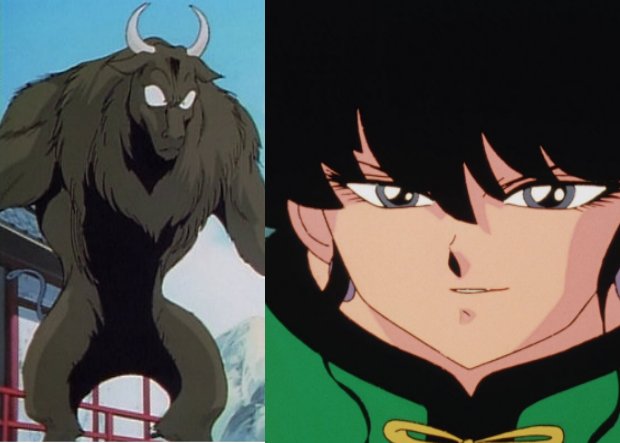 The most cursed spring in Jusenkyo has been the life-long curse of the warrior Pantyhose Taro. Master Happosai brought Taro to this spring when he was less than an hour old. Happosai helped Taro's mother give birth, but mistakenly used the waters of this spring to clean Taro off. When splashed with cold water, Taro turns into a large Minotaur-like creature with crane's wings and an eel for a tail. However, Taro uses this curse to his advantage as a weapon against those who oppose him in his search for Happosai. 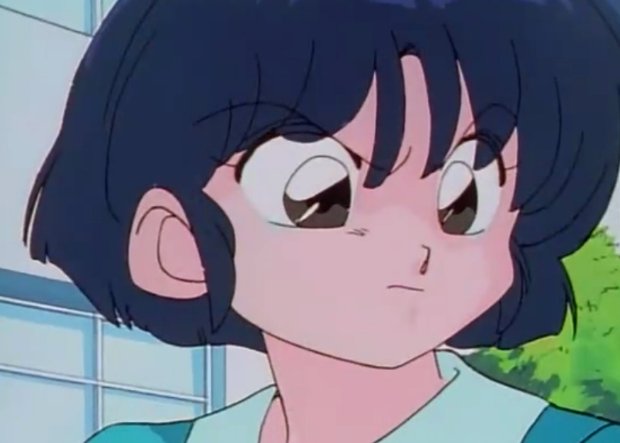 Yes, Akane has her own cursed spring that turns people into her lookalikes when splashed with cold water. This spring was newly dug, and "blank" as it had no cursed form associated with it. Kiima of the Pheonix people captured Akane and dumped her in it to gain her form as the curse. Kiima then submerges herself in the spring to take on Akane's form to try and seduce Ranma. This spring appeared in the manga and was never seen in the anime
.

As you can see the Jusenkyo springs offer a nasty surprise to anyone foolish enough to train there. Seeing as no one who went there seems to get out unscathed, it is one of the most dangerous and devilish places to be in the Ranma universe.