What is a kitsune mask and where did it come from? 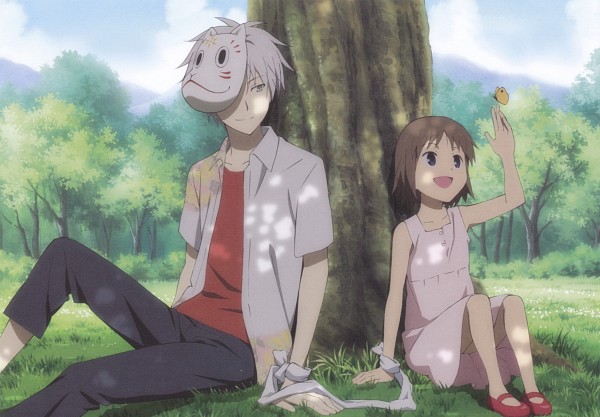 The kitsune mask has become a staple of Japanese pop culture, its eye-catching red and white designs frequently appearing in anime, manga, and other artistic channels. Since it's often seen in the context of festivals, many people think of it as some kind of lightweight prop, but its roots go much deeper than that. Foxes have a special place in Japanese culture, in both folk and religious applications, and as such, the kitsune mask inherits meaning from its ties to the animal itself. Japan also has an incredibly rich history of masks, which explains the actual existence of the kitsune mask as a physical object. Given that the kitsune mask is entwined in both of these threads, it carries a lot more cultural significance than one would initially guess.

Check out the cool kitsune mask that the vocalist of BABYMETAL is rocking in this music video for the song Megikitsune.

What role do foxes play in Japanese culture? 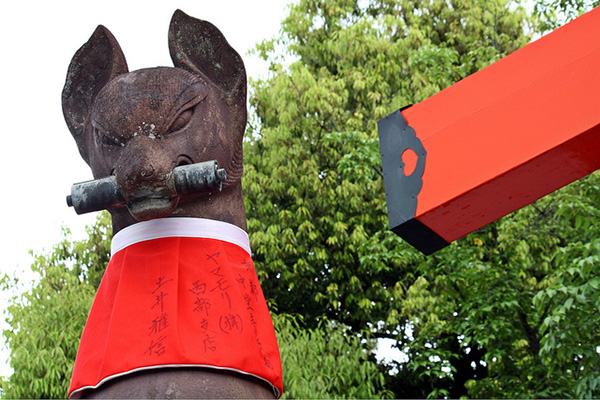 Foxes in Japan are contradictory creatures, seen as either benevolent or malevolent depending on context. In Shinto, one of the primary religions of Japan, the fox is considered a messenger of Inari, the guardian deity of fertility, rice, agriculture, and industry. Shrines dedicated to Inari feature statues of foxes, and worshippers often set out offerings of rice, sake, and other foods to appease Inari's messengers.

Fun fact: inarizushi, sweet fried tofu stuffed with rice, is named after Inari because fried tofu is believed to be a fox's favorite food and the corners of the tofu somewhat resemble fox ears. 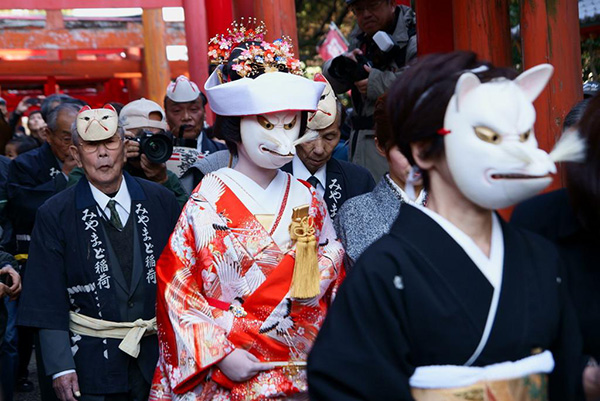 In folklore, foxes are believed to be shapeshifting tricksters, pranking innocent humans whenever they get the chance. There are stories of foxes taking on the appearances of beautiful women and seducing unsuspecting men, or disguising themselves as monks to swindle some gullible villagers (the song at the very top, Megitsune, which translates to female fox or vixen, refers to this deceptive aspect of foxes). The term Kitsune no Yomeiri, or Fox's Wedding, is made in reference to two curious phenomena—mysterious floating lights at night and rain showers in sunny weather—and these bizarre conditions are attributed to the tricky nature of foxes. In the folklore sphere, one application of the kitsune mask is in popular reenactments of Kitsune no Yomeiri, in which members of the fox wedding procession don masks. 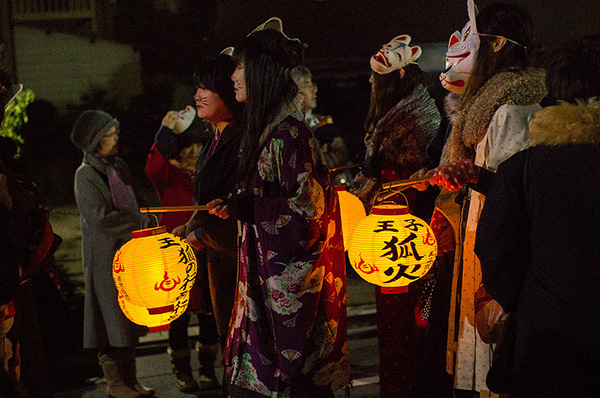 Another common place where masks are seen is festivals, such as Oji's Fox Parade, which is inspired by the legend that all the foxes in the area used to visit Oji shrine (dedicated to Inari) on New Year's Eve, disguised as humans. Every year, hundreds of mask-wearing humans—and perhaps mask-wearing foxes—gather to celebrate.

What role do masks play in Japanese culture? 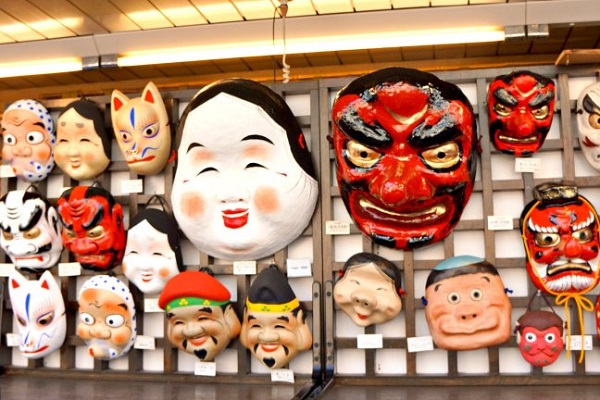 Speaking of Inari and Shinto, Japanese masks are closely tied to religion. Although their roots are in dance and performance, over time, those genres began to merge with religious practices. Noh masks are arguably the most well-known, often making their own appearances in pop culture, but many are unaware that Noh masks are just one subsection of Japanese masks, which also include those of Kyogen—comedic theater—and Kagura, a Shinto ritualistic dance. In fact, kitsune masks are actually a staple of Kyogen rather than Noh. But given the prominence of Inari and foxes in Shinto, it's likely that kitsune masks are quite closely tied to Kagura as well. 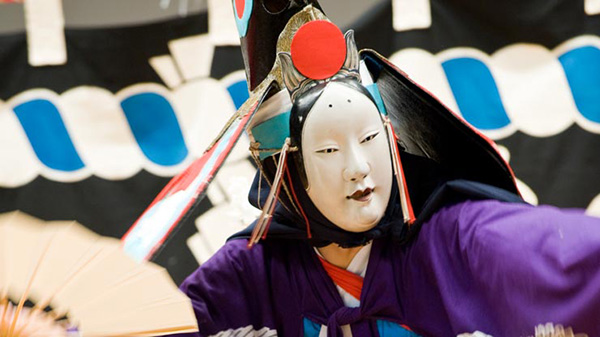 Kagura performances are traditionally held to honor Shinto deities, particularly around harvest season to pray for bountiful crops. In the more reserved forms of Kagura, priestesses perform graceful, ceremonial dances, but there are also outlandish versions that involve masks and costumes. Since Inari is the deity of rice and agriculture, and many shrines hold festivals in late summer/early fall to coincide with the rice harvest season, Inari has become closely associated with these celebrations, which probably explains why kitsune masks have become such a prominent symbol of Japanese festivals.

In casual settings, there doesn't appear to be any reason why kitsune masks are worn off the face except that they're uncomfortable and difficult to see through.

Come check out some kitsune masks in anime!

Kitsune masks appear occasionally in anime, but the trend seems to be that they're used more in dark, mysterious situations than in festive ones. Granted, masks are often associated with disguise, so this usage isn't all that surprising.

Here are a few notable examples: 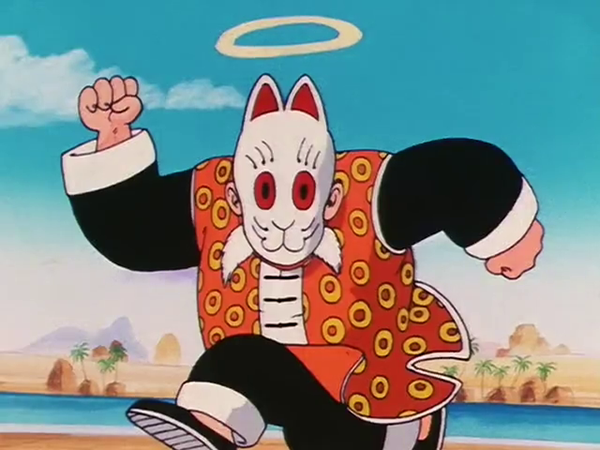 In Dragon Ball, Grandpa Gohan wears a kitsune mask to hide his identity from Goku as they fight. Grandpa Gohan, having trained Goku in martial arts, knows Goku's weaknesses and wants to teach him to be more aware of them. However, he wears a mask because he wants to convey this lesson as an opponent, rather than as Goku's former master. 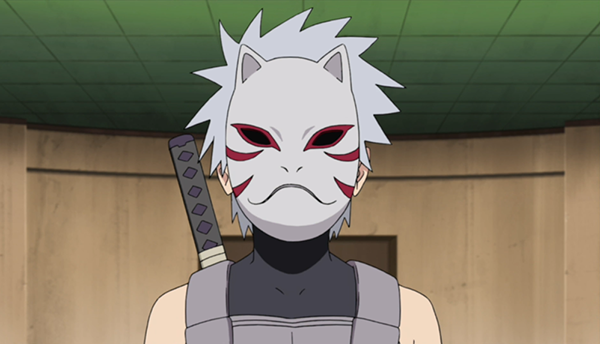 In Naruto, kitsune (and other animal) masks are worn by members of the Anbu, a covert ops team that takes on high-risk missions to protect its village from danger. Each village has its own Anbu team, and the primary function of the masks is to conceal Anbu members' identities. Though the masks are fairly similar, they each have slightly different markings. 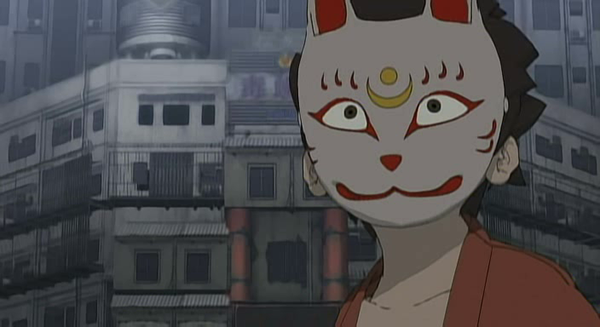 Eight kids play a sinister game of hide-and-seek, in which they are chased down by demons. All of the participants are wearing different kitsune masks, and it appears that wearing them is a requisite to play the game. There are five different types of demons, and it turns out that whoever is "it" among the human children is possessed by the fox demon, hence the kitsune masks. Since all players are wearing masks, the fox demon can blend in with the rest of the crowd. 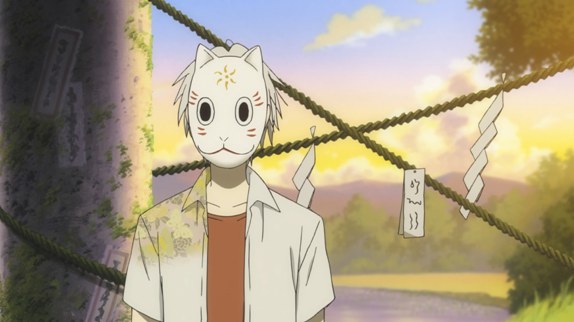 One of the main characters in Hotarubi no Mori e, Gin wears a kitsune mask to "seem less like a human" because he looks like a normal boy, even though he isn't. In the overall theme of the movie, the mask functions as a symbol of his feelings towards Hotaru; though he's initially pretty guarded with her, he starts taking his mask off more often as they get closer, and he eventually gives it to her when his affection is at its peak.

Additionally, there's actually a summer festival in Hotarubi no Mori e, where Gin fits right in with his mask. If you look closely, you can see quite a wide assortment of other types of masks too. 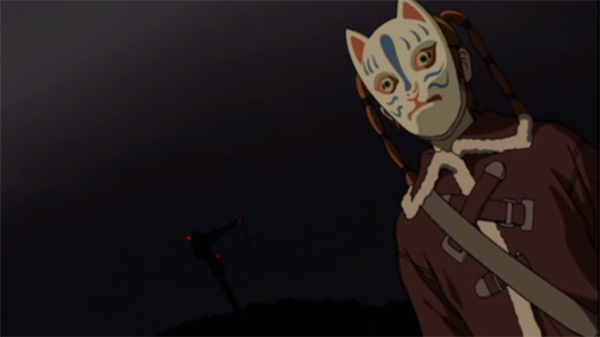 In Texhnolyze, Ran's kitsune mask symbolizes her prophetic self. As someone able to see the future, she's revered for her ability, though she considers it much more of a curse than a blessing. Her hometown Gabe is an agrarian community, and as we know, Inari is the deity of agriculture. In that context, Ran's kitsune mask carries extra significance, denoting her elevated status through a subtle cultural reference.

Kitsune masks are beautiful in themselves, but their substantial background makes them even more interesting. Hopefully the next time you see one, you'll be able to fully appreciate its cultural and historical value on top of its aesthetics, and you'll be better equipped to tease out any deeper meaning that might be associated with it.