The massively popular battle card game from DMM.com in Japan is now available in English. Take command of your own special Alchemist Deck, and hunt down escaped Homunculi from the mighty Alchemist’s Academy! 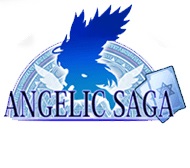 Angelic Saga Online is yet another fantastic Anime Game from the brain trust behind the addictive Flash Games at Nutaku.com. Magic the Gathering may well have established trading card games (TCG) into the everyday gamer’s psyche, Hearthstone may have it being played by the mainstream fan, but Angelic Saga Online has taken the TCG game play a step further!

Angelic Saga Online is an anime flash game developed for DMM.com in Japan that is exclusive to Nutaku for the North American fan who loves battle card games. You take on the role of a magic-deck spellcasting alchemist and embark on a journey to save the world from insanely attractive video game girls in the form of rampaging Homunculi with their own spellcasting decks. 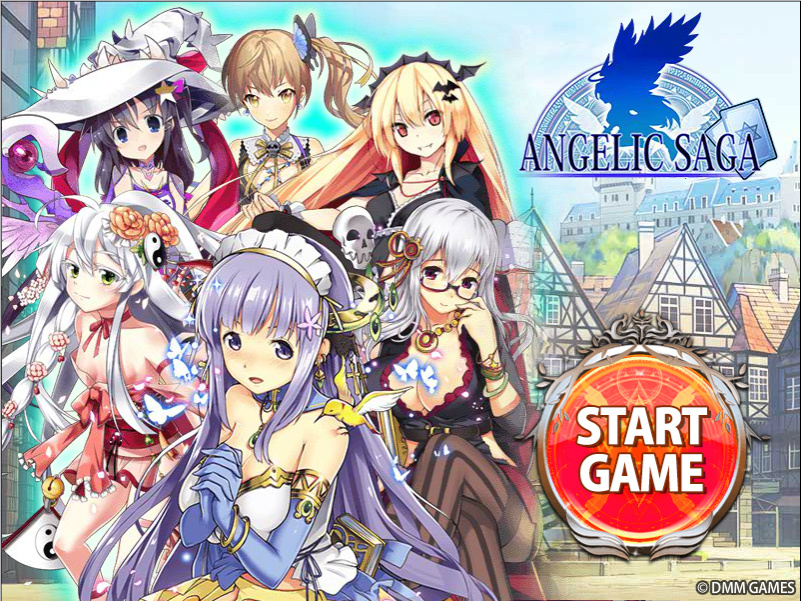 From the start, as the PC you’re thrust into an emergency situation. In a world where magic is as common as smartphones, you’re dropped in the middle of strange events emanating from the almighty Alchemist’s academy, having caught wind of missing servants or “homunculi” from your own trusty game guide and homunculus, Maron. Of course Maron may not think she is your servant and also seems to know a great deal more than you - the fun banter between the titular character and his homunculus is one of the more captivating aspects of the game.

You will fast come to realize that Maron knows all too well what drives you in this battle card game adventure and how to “push your buttons” so to speak. In fact, as a player you quickly realize that the title character you play really doesn’t care about saving the world, saving the Alchemists or in truth saving the marauding homunculi at all. Our title character seems to have baser reasons for setting off to battle these magically “brainwashed” homunculi. 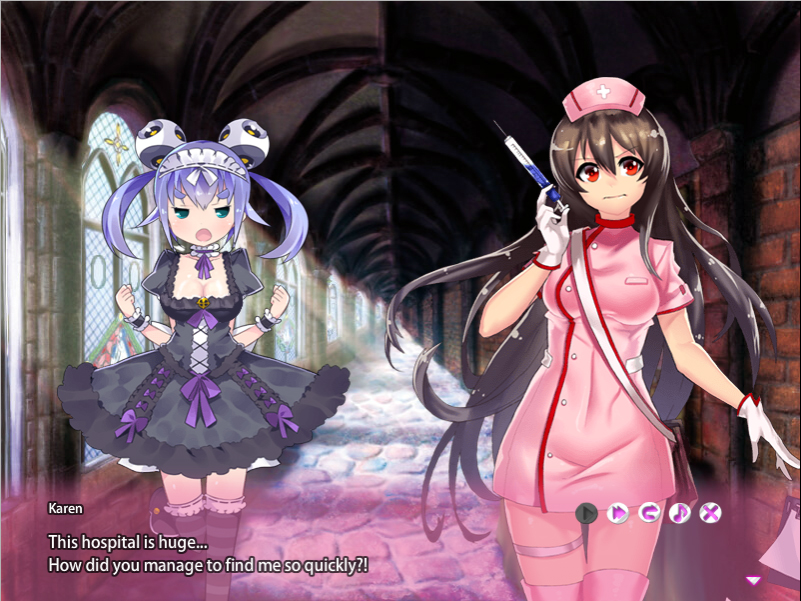 Angelic Saga Online plays like many battle card games before it - the initial tutorial from Maron quickly and effectively explains the basic mechanics; drawing cards, sacrificing their “Mana Cost”, or how many points it takes to cast a spell card from your hand and onto the playing field, then using that point total to cast spells from your hand. This quickly becomes a balance of strategy vs need – do you burn an important card to get the points necessary to cast a spell now, or do you wait and keep that card to use later? As each round progresses, you begin your turn with the amount of mana you’ve accumulated from the last round, in addition to the new amount you sacrifice for your current round. So if you had 5 mana points in the last round, and sacrificed a card with a mana cost of 4, not only would you have 9 mana points to use this round, but you would also start off the next round with 9. The caster must weigh the pros and cons of each card in his/her hand. Maron then proceeds to explain the differences in the card packs that you can choose from; Skill, Balanced, Technical, Defense, Attack - standard stuff for experienced TCG players, but a welcome explanation to those that are new to the genre. 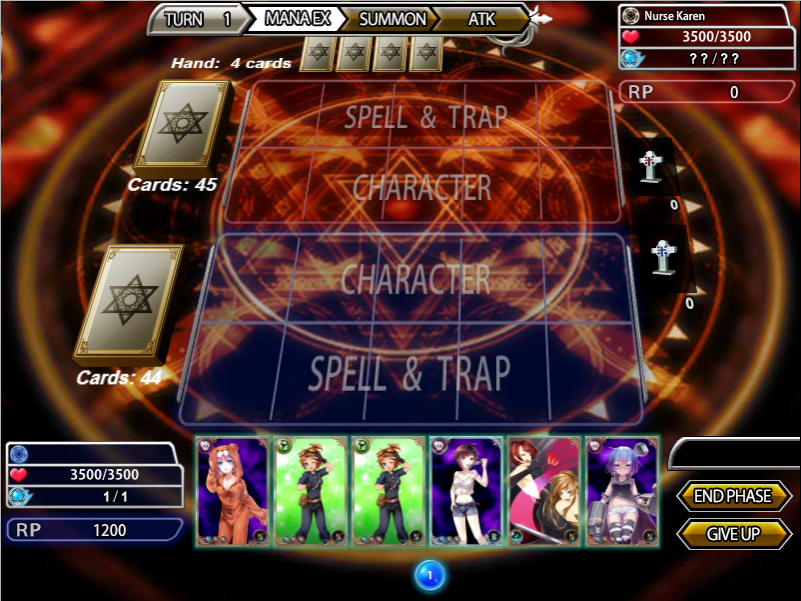 Following some entertaining exposition, our title character (you) learns that the only way to save the brainwashed homunculi and subsequently the world, is to track them down one by one and defeat them in classic trading card game battle style! Of course as mentioned earlier, the titular hero is not doing this out of the goodness of his own heart - oh no - you’ll find that this lead character is much more interested in oogling these highly attractive ladies than actually dealing with the situation like your typical hero…all the while Maron chastisizing him for his lewd actions.

Veteran TCG gamers can rest easy knowing that Nutaku.com understands full well what makes anime games like this even better - the interaction and competition between gamers in PvP combat. Player versus Player card battles are a stable in this sexy TGC game, with huge rewards for tournament wins. 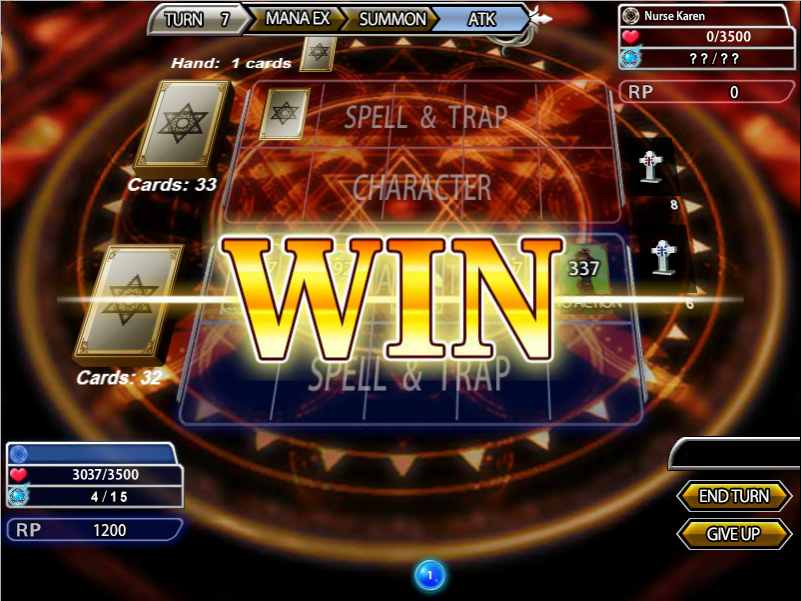 Card battlers be warned, this game will test your skill and wit – whether against the story mode or against a human opponent, you’ll always be trying to think multiple moves ahead. Story missions consist of 6 quests per mission, where you hunt down a specific homunculi and face her 3 times in combat. In the 6th and final battle of the story’s chapter, she is “freed” from her control if you defeat her, and no longer a threat to the world. Once you have defeated Sorceress Sabine and complete your first mission, you won’t want to stop!

Angelic Saga is completely free to play and features both a story and PvP mode. There's no reason you shouldn't try this game full of cute anime art out!
Get started now here!