Cute, appealing, and oh so fluffy: anime bunny girls are simply irresistible. From the demure to the delicious, you just can’t go wrong with bunny eared anime girls. Forget the neko, let’s see some usagi! 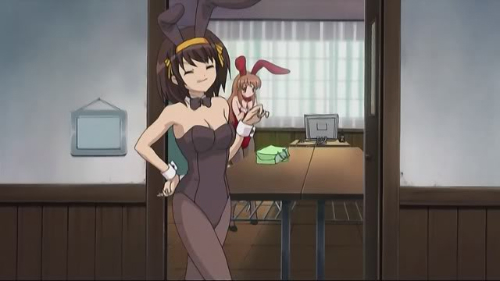 The infamous Playboy bunny outfit has one purpose and one purpose only: to look appealing, alluring, attractive, and other seductive words that begin with the letter 'A'. Actual anime bunny girls, on the other hand, are not as straightforward as you might think.

Bunny-eared girls, aka usagimimi, are not as popular as neko girls, but they’re just as varied in type and, uh, build. These bunny girls range from cute and innocent, to sexy and wouldn’t-hesitate-to-lop-your-head-off.

From Mondaiji-tachi ga Isekai kara Kuru Sou Desu yo? (Problem Children Are Coming From Another World, Aren't They?) 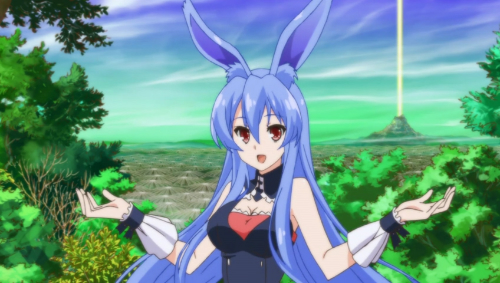 Kurousagi is a true bunny girl through and through. Like some other bunny girls, Kurousagi’s ears are a symbol of her power, but she is the only character on this list who transforms from a bunny into a bouncier, pinker bunny when she powers up. This dark bunny is not so dark, though - she is kind-hearted and fair, and fiercely loyal to those she cares about. As for the outfit… it wasn’t her choice, really! 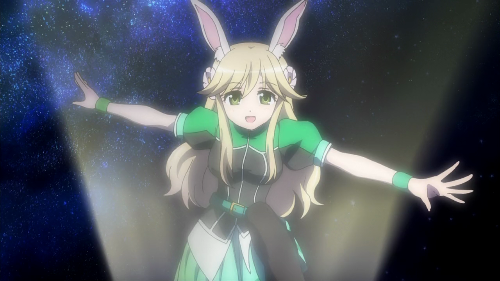 Eclair, Biscotti… the food references in the character names of Dog Days are anything but subtle. In a cast full of delicious-sounding, animal-eared girls, Vert Far Breton is the only bunny girl. She has a rabbit’s innocence paired with the gelatinous clumsiness of the dessert she’s named after, which is a type of French flan. Now you know!

You may think Alice is just your typical green-haired girl in glasses, but then she whips out that flip phone and transforms into her magical girl alter-ego. Her green hair is replaced by the more fitting Alice in Wonderland shade of blond, and gone are the glasses. Alice’s magical girl outfit is bunny themed, and although the ears appear to be attached to a hairband, the tail is definitely not. At least, we don’t want to think about how it’s attached.. 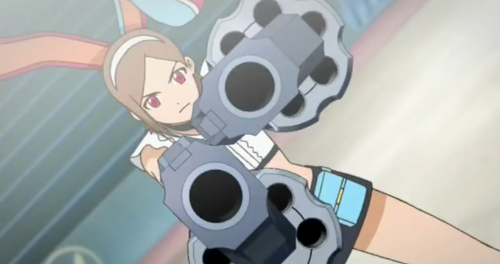 Lunar weapon bunny Mina is a weapon disguised as a rabbit disguised as a carrot. Her entire troupe of fighters dons bunny ears to fight, but none are as oversized and wonderfully colorful as Mina’s. The carrots on her outfit are functional, too - her Carrot Weapons and ultra special move Carrot Hammer will finish off any bad guy. But of course, she hates eating carrots.

From Show By Rock!! 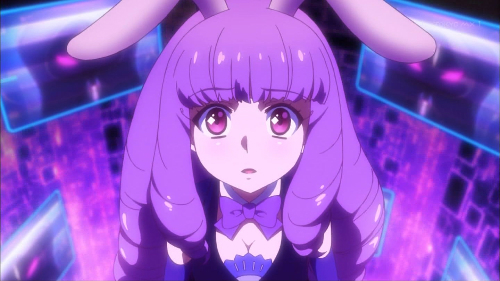 She’s smart, she’s ambitious, and she has fabulous hair－Chuchu is a natural diva. The bunny ears topping that luscious hair seem regal, and with her awesomely named Antique Batman Guitar, this bunny can sure rock out. 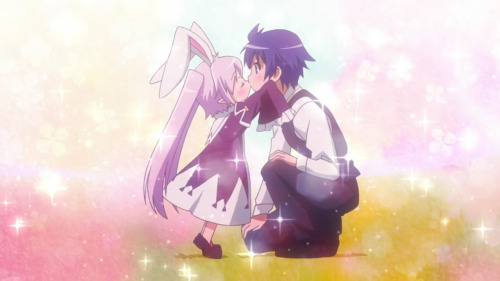 With a name like that, Ingrid must be some military official, right? ...Oh wait, she’s a 7 year old all-knowing being with adorable pigtails and even cuter bunny ears. Of course she is. How could I have doubted you, anime?

From Umineko no Naku Koro ni (Umineko: When They Cry) 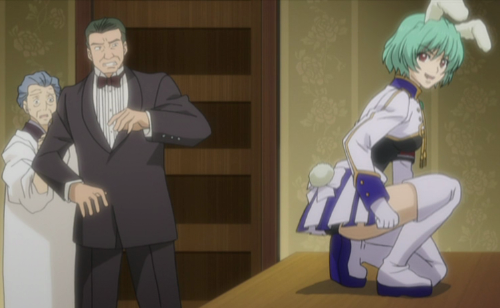 There are three Chiester sisters, all with matching bunny ears. But it’s the sniper of the bunch, Chiester 410, who’s the crowd favorite among the fans. Maybe it’s the childish smile she wears in contrast to her sisters’ sullen expressions. Come on, how can you not smile with ears that fluffy? 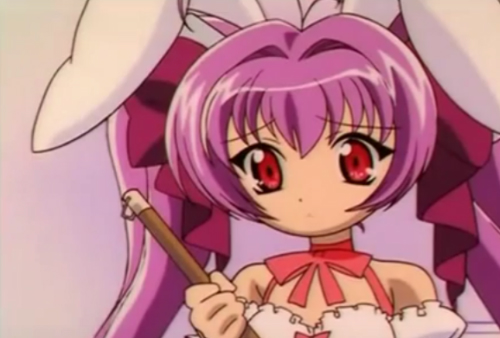 When Hikaru transforms into Rabi~en~Rose, she gets some pretty impressive bunny ears that are practically bigger than her head. Ears like that could be pretty useful as helicopter blades or a fan on a hot day...

From Rokka no Yuusha (Rokka: Braves of the Six Flowers) 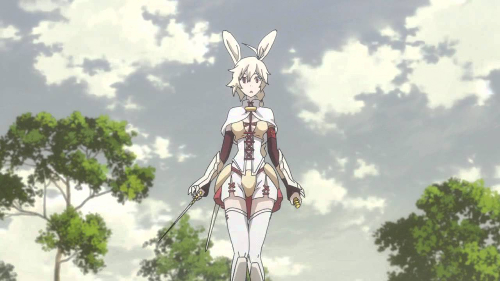 Not all bunny-eared fighters are cute magical girls. Nashetania’s warrior helmet comes with bunny ears, and in her case they represent grace. They might not be real, but those ears turn Nashetania into a noble white rabbit, and make her look good, even when she’s getting kicked in the face. 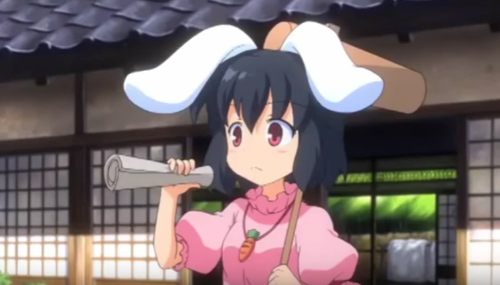 Despite her youthful appearance, Tewi is over 1,000 years old. She leads all the rabbits of the earth and has been known to bring good luck to any human who sees her… if they’re lucky enough to catch a glimpse, of course. 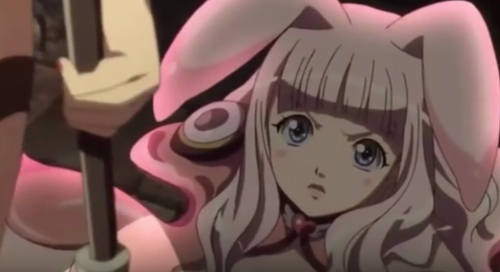 No hair can be compared to Melona’s silky threads of… pink goo? Melona’s hair is pretty remarkable since it can take on any form (just like the rest of her). Naturally, she uses it to form bunny ears. Wouldn’t you? Luckily (or unluckily, depending on who you ask), she also uses her hair to cover her otherwise exposed breasts. 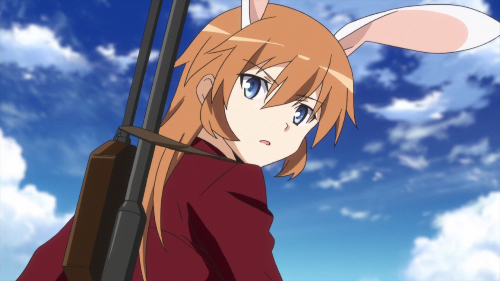 Charlotte is one bunny with a need for a speed. Her battle-ready look comes with bunny ears and tail, but you won’t get to pet them because she’ll be miles away before you can say "chu". 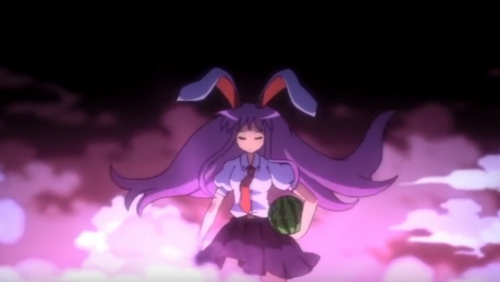 The previously mentioned Tewi might be the guardian of all Earth bunnies, but Reisen is no Earth bunny. This purple-haired, bunny-eared maiden comes from the Moon, and has the power to control waves of all kinds. Don’t get on her bad side, and definitely don’t look in her eyes… you can lose your mind in there.

From Full Moon wo Sagashite (Searching for the Full Moon) 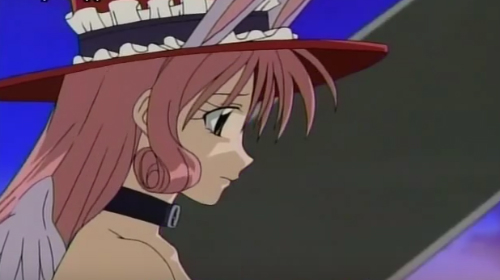 That’s no ordinary stuffed bunny! Bunny-eared Meroko can make herself look like an innocent toy but never forget that this is a shinigami you’re dealing with here… a death god. Her heart might be in the right place but her plans and plots can cause more trouble than they solve.

From Date A Live 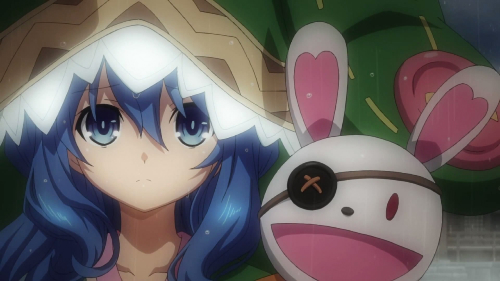 She might not be a rabbit herself, but Yoshino’s rabbit raincoat and puppet are as much a part of her as those huge blue eyes. A shy and kind spirit, you’d have to really provoke Yoshino to see her incredible water-manipulating powers. But why would you want to provoke someone as adorable as her?