Yosuga no Sora OST: A Soundtrack More Beautiful than Ecchi 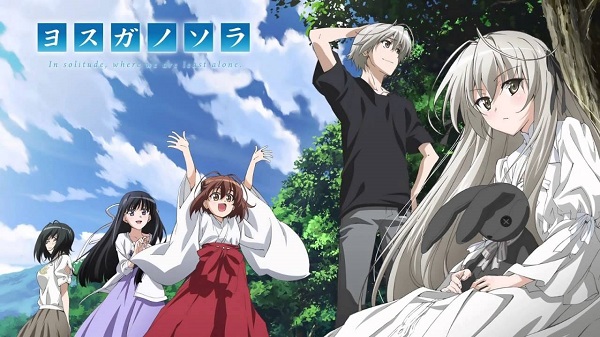 Yosuga no Sora: In Solitude, Where We Are Least Alone is a uniquely structured anime, inspired by an adult visual novel of the same name. The plot follows twin brother and sister, Haruka and Sora Kasugano as they return to the rural town they grew up in, following the tragic death of their parents. Harem elements quickly come into play (it is based on an adult visual novel, after all) when Haruka runs into several female admirers from his past. Similar to how visual novels tend to branch off into different paths, so too does the anime, allowing itself to follow different characters along different parallel stories.

One of the other things the anime shares with the game is its music. The original soundtrack for the visual novel was composed by Manack, who with the help of Bruno Wen-Li, also did the music for the animated series. Naturally, using the same composer for both would lead to similar sounds, and indeed several songs have been remixed and rearranged in making the transition from the game to the series. But let's say that ecchi titles aren't your average form of entertainment and most people probably don't have the patience to read through a novel. Thankfully though, the Yosuga no Sora OST is available for you to enjoy... right now!

"Hiyoku no Hane" by eufonius

Performed by eufonius, "Hiyoku no Hane" is the anime's opening theme and begins with a series of solemn chimes. It then transitions into a more light-hearted arrangement, propelled by a stirring string section, strong vocals, and a deceptively complex bass line. The theme is a bit deceptive in how it compares to the rest of the soundtrack; much of Yosuga no Sora is drenched in darker, sadder piano tones and low strings. The piano during the instrumental bridge is a hint at what much of the remainder of the OST is like. Nonetheless though, "Hiyoku no Hane" stands out in the soundtrack as a compelling orchestrated pop piece that you don't need to enjoy the anime to want to listen to.

"Old Memory" is far more indicative of what you can expect from the soundtrack of Yosuga no Sora. Despite the romance running rampant through the story, there is always a sense of loss and remembrance due to the backstory of Haruka and Sora. "Old Memory" embodies these emotions with its sparse, melancholy piano chords. Be sure to note the use of silence in between certain parts of the song, allowing particular notes to linger until they fade, leaving a deep impression on listeners.

Strings are another important part of the OST, and "Deep Inside Region" showcases this with the deeply resonant sounds of the cello. As displayed earlier, the piano has a strong, emotional tone to it, but here it's matched with the equally emotional pull of the deep string arrangement. For a piece that's under two minutes long, it seems to cover a lot of sentimental context, something that can be readily attributed to how well the two main instruments work together.

Just to show that it's not all heart-wrenching sorrow, there is an alternate ending theme to Yosuga no Sora by Momoiro Clover Z entitled "Pinky Jones." Unlike any other song on the soundtrack, this one is bouncy, fun, and features completely different instrumentation than the rest of the OST. Gone are the strings and piano and in their place are bright keyboards, sitar sounds, lush pop harmonies, and an electronic drum track. If you're confused about why this is present, do remember this isn't the traditional ending of the show and was used as a special ending. Still, the lighthearted nature of the song can be a pleasant respite from the more solemn, emotional soundtrack of the episodes in general.

Ecchi anime are not going to be for everyone thanks to their overtly sexual nature. Yosuga no Sora can be especially difficult for some given how far some of its sexual nature goes; then again remember it's based on an adult visual novel and some may argue that it doesn't go far enough. Regardless, a lot of effort was put into the composition of its soundtrack as evidenced from the piano arrangements and string orchestrations. Sometimes you can be pleasantly surprised by the music an anime outside of your normal genre can generate, and if you like the sounds of "Old Memory" and "Deep Inside Region," there are a lot more of those kinds of tracks in the OST.