The long running manga Berserk has spawned numerous memorabilia over the years. Here, we are going to show you some of the gems that have hit the market over the years. 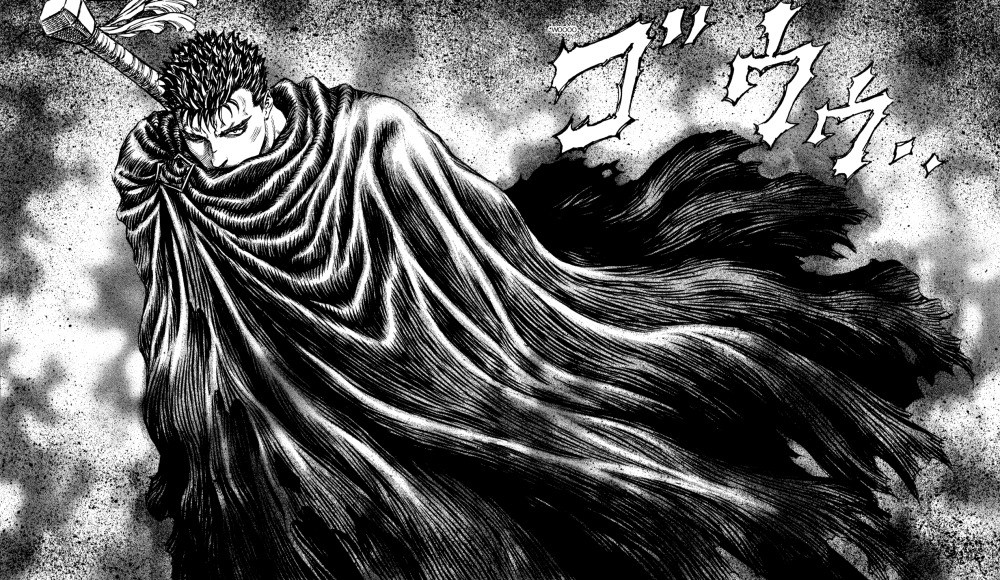 "You're right, we are mortal and fragile. But even if we are tortured or wounded, we'll fight to survive. You should feel the pain we feel and understand. I am the messenger that will deliver you to that pain and understanding." - Guts
Love it or hate it, but Berserk will never leave you feeling indifferent (I’m looking at you, Golden Age Arc). Since its first issue in 1989, Berserk has spawned 37 manga volumes, an anime series, a movie series, and countless merchandise. Over the years, a lot of Berserk figures have hit the market, but none are finer than these 5 figures! 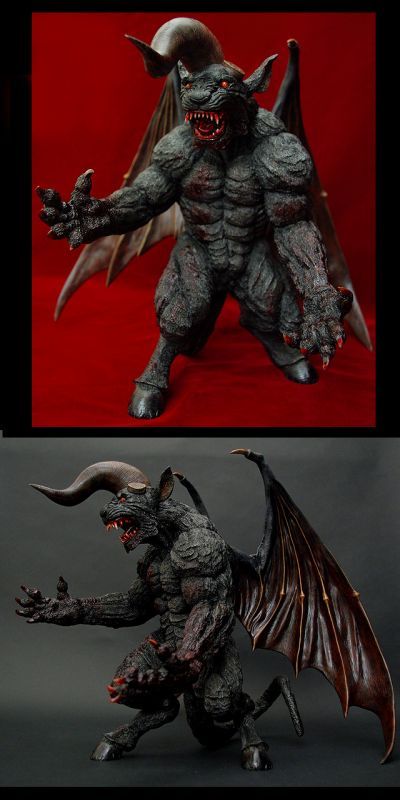 First item on our list is none other than the figure of the immortal Nosferatu Zodd. Zodd is a powerful sword master and Apostle who wanders the battlefields of the Berserk world searching for ever-stronger foes. In his human form he is depicted as 10-foot-tall barbarian but when he enters his Apostle form, he becomes a giant monster with wings capable of flight. This figure actually depicts Zodd’s Apostle form in all of its glory. This figure is 32 cm (12.5 inches) tall and the spread of its wings is an astonishing 37 cm (14.5 inches). The size is not the only special feature of the wings. The wings are painted with a special mix of blue and black tones, and the artists have worked very hard to make the outer surface of Zodd’s wings look like real fur while making the inner surface smooth and slightly luminous like a bat's wings. If you look closely, you can actually see that on Zodd’s teeth, the artists actually even took the time to sculpt tiny bits of human flesh on them. This amazing figure was both sculpted and manufactured by the Art Of War figure company. The figure is made from polystone and metal, and comes with its own serial number plate. There are only 50 of these figures out there in the world, and they are very rare in the secondary market but if you do manage to find one, it can go up to 150,000 yen (around 1,200 US dollars). 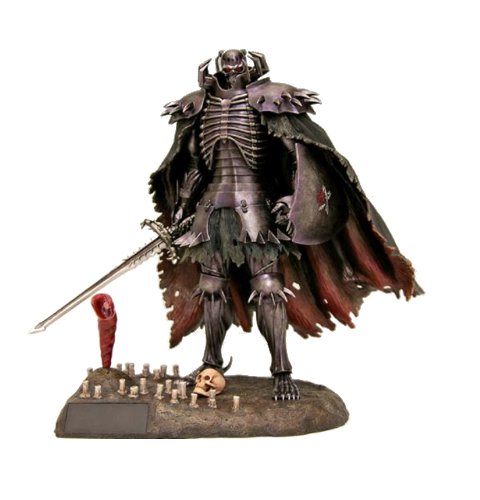 As fate would have it, the next item on our list is a figure of Zodd's rival－the Skull Knight. This Skull Knight figure, like Zodd, was sculpted and manufactured by Art Of War. The inspiration for this figure comes from Berserk volume 20, "Conviction Arc Birth Ceremony Chapter One - Unknown in the Depths of the Depths". This figure represents a recreation of the encounter of Skull Knight with the Apostle calling himself "The Egg of the Perfect World". The scene happens underground in complete darkness, save for candles that illuminate the immediate surroundings. So you really feel the bleakness and darkness from the scene that has been used in creation of this statue. To emphasize the darkness of the scene, the artists used iron gray, green and dark purple in deeper shades when painting this statue. To stress the candle illumination, his mantle was colored in a darker tone on the outside and a brighter tone on the inside. The base of the statue is modeled upon the cave where the scene is happening with numerous sculpted candles all over it. Originally there were 50 copies made, but after the fans demanded a few more figures, they made extra 5 copies. With this figure you will also get two sword accessories, a normal sword and the Beherit sword. The Skull Knight figure was made from polystone and metal, and was released in 2013. It stands 24.5 cm (around 9.6 inches) tall. With it you also get serial number nameplate. If you manage to find it on the secondary market, the prices start at around 150,000 yen (around 1,200 US dollars). 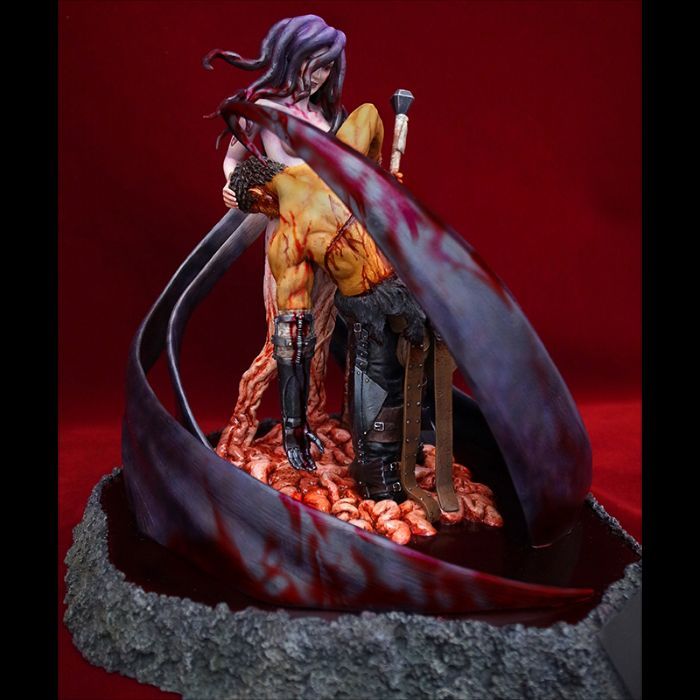 This third figure on our list comes from, you guessed it, Art of War. This figure was modeled by the scene that appears in Berserk comics Chapter 219, Millennium Falcon -The Border of Hell. It depicts the powerless Guts all bloody and beaten up in the claws of the female temptress of the God Hand. The statue tries to convey the darkness, dread and desperation that Guts feels at that moment by the beautifully modeled Guts showing exhaustion and dread coupled with the coy look on Slan’s face and the sharp dark wings that have almost completely enclosed Guts. Still, our brave Guts never lets go of his sword- Dragonslayer. One of the most exquisite details can be found on the special base. The whole base is covered with internal organs that envelop powerless Guts. With closer inspection you can actually see that the organs actually come from Slan’s feet. Like the previous figures this one is part the series of 50 figures and it comes with its own serial number plate. The thing that differentiates this figure from the others is the material it is made of. This figure of Guts and Slan is made from polystone while some parts of it are different, "special" polystone. The figure is 19.5 cm (approx. 7.6 Inches) tall and with it comes a special diorama base. This grotesque beauty was released in August 2015, and its prices on the secondary markets peak at about 184,600 yen (around 1500 US dollars.) 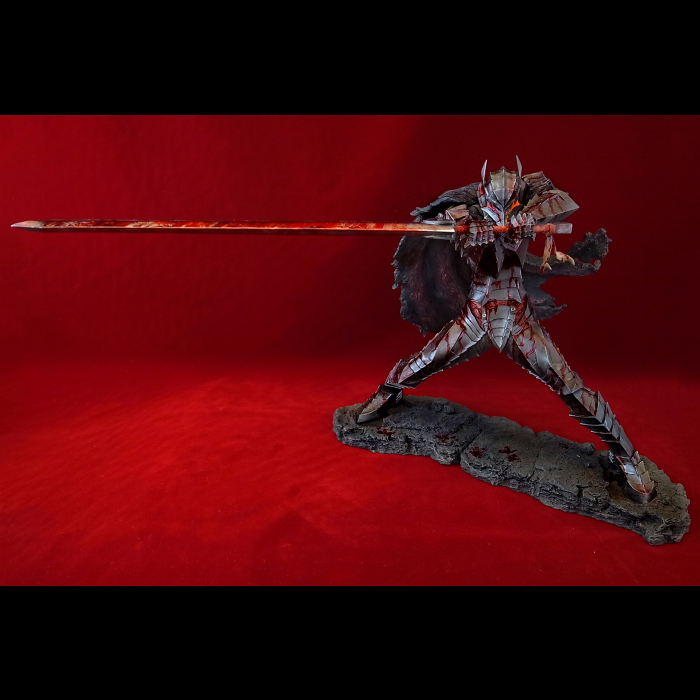 The second to last entry on this list is another magnificent figure of Black Swordsman, Guts. This is the new version of the BERSERK 20th Anniversary Statue which was one of ART OF WAR's popular items. This version, like the original tries to represent Guts’ power which was accomplished by showing the powerful swing of his sword Dragonslayer. The Dragonslayer that comes with this statue is 42 cm (approx. 16.5 inches) long. It was modeled after the scene from Berserk vol.31, episode 271 (Eastern Magic). With this statue you get an interchangeable head. The normal head just shows the wolf helmet, and Guts’ face cannot be seen, and that’s why there is a bonus head showing Guts’ face with an interesting black wavelike pattern that shows that Guts is one with the armor. With this item you also get a figure of defeated apostle which is 5.5 cm (approx. 2 inches). There are only 50 of these figures made with 25 made for the international market. The figure is a pre-painted polystone figure with metal serial number name plate. The height of the figure is 34 cm (approx. 12.5 inches). It was released in June 2015 and the price on the secondary market can go up to around 332,200 yen (around 2700 US dollars.) 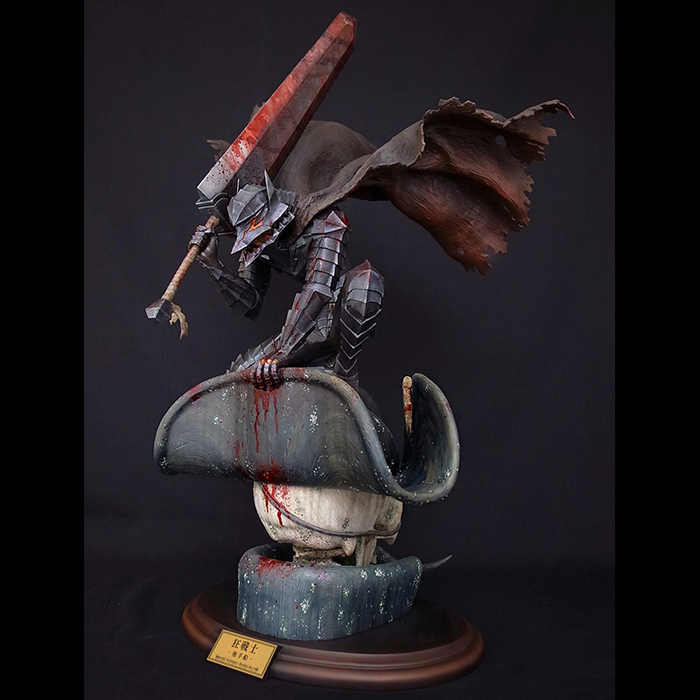 This is the moment you’ve all been waiting for. The number one figure on our list is unsurprisingly another figure of Guts. This figure is modeled after the scene in Berserk volume 35, Fantasia Arc, Elf Island Chapter. Here Guts is shown wearing his Berserk armor while squatting on the bow of the Tentacle ship. The helmet and the armor are modeled in a way that shows that Guts has already lost control. Even his eye has been colored bright red to show his bloodlust. Also the blood on the armor and the cape has been used to show just how dangerous a battle Guts is facing. To show the time that the ship has spent on the sea, Art of War artists used tones of blue and green to show the effects of the tide and the degradation of the wood. The whole skeleton head pedestal has been colored in a way to show wear and tear of the wood and the dried algae. The one of the most impressive details on this statue has to be the crystal eye of the skull. It even comes in two variants: the standard white crystal and the yellow crystal. Customers got to choose which one would go with their statue. This statue was only made in 30 copies; 15 were made for Japanese market, and 15 for the international market. With it you get Guts’ human head and a serial number nameplate as extras. The figure is made from polystone and special polystone. The statue is pretty big at 52 cm (approx. 20 inches) tall. It a completely pre-painted figure and it was released in September 2015. With statue this exquisite, the price is bound to be high, with some pieces going up to 615,500 yen (around 5,000 US dollars). You should check the secondary market, where it can be found for lower prices if you are lucky.

There you go folks, that was the list of the most expensive and awesome Berserk figures out there. If you find one, be sure to grab it because they are extremely rare. Happy hunting, Berserk fans!

Pokemon is popular as ever, and we are here to show you five figures which can help you become the best Pokemon figure collector there is!