Kiss x Sis is bathed in risque and ecchi moments throughout the course of the show. Here is a list of the hottest moments to be found in the anime! 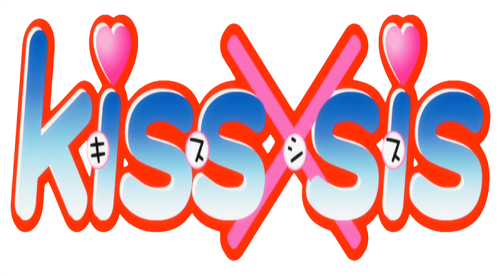 Kiss x Sis features the life of a boy named Keita and his interactions with his older twin step-sisters, Ako and Riko. The two girls are both equally after him with deeper feelings than just brotherly and sisterly love--they are attracted to him! Along with the supporting characters of a bountiful classmate, Miharu Mikuni, a hopeful teacher, Yuuzuki Kiryuu, and her loli-esque sister, Mikazuki Kiryuu, a story is developed that showcases Keita's growing desire to give his step-sisters what they are after.

The anime itself has a lot of scandalous moments. Though they aren't 100% explicit, they are considered to be borderline. Here are a list of the hottest moments of Kiss x Sis sorted by each and every female love interest! 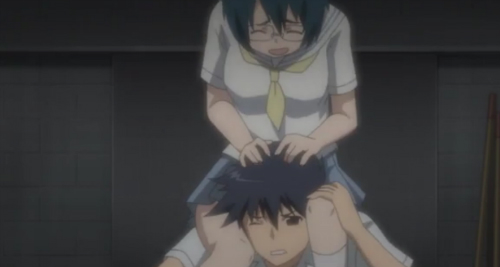 Miharu Mikuni never wanted any trouble, but this library assistant encounters loads of shenanigans! When she sees Keita in the library at the same time she feels the need to use the bathroom, she's afraid to take her eyes off of him because she believes he will hurt her. She runs away in fear, but he chases her, and they both spend the school day running from Ako and Riko. They find themselves locked in a gym supply closet...where things get a little complicated and really messy. 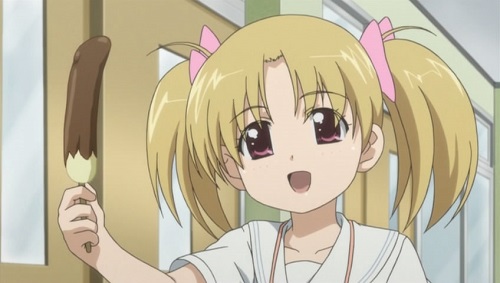 This anime seems to have a knack for making seemingly innocent things look very suggestive. This scene in particular uses chocolate and a banana to warp the minds eye into thinking it is something a little more than innocent. Mikazuki Kiryuu is constantly trying to gain Keita's lust by doing obscene things around him that always catches his attention. She even goes as far as to show him a little more than he had been expecting. In this scene, she eats a chocolate covered banana in a very risque fashion, and the closeups on the banana throughout the scene shows that it was inserted with an ecchi intent. 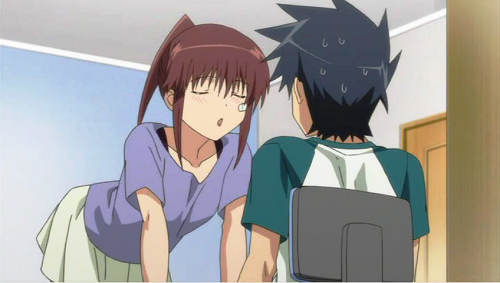 This scene in particular takes the cake. Keita is fed up with his sisters sneaking kisses at every moment, so he puts a ban on them. Riko decides that in order to win Keita's love, she has to bend the rules a little bit. So she creates some chocolate lipstick. To her, it's not quite kissing as much as 'sampling her product'. Whichever way you look at it, they are definitely having a good time. 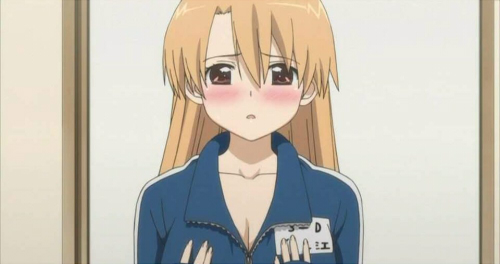 Yuuzuki Kiryuu is Keita's teacher, and as the time passes, she starts coming to terms that she is going to be yet another love interest in his life. She trails him to a pool to make sure that everything is okay, only to be soaked in water by Riko and Ako. Considering her wet clothes, Keita gives her his tracksuit to wear and things get a little out of hand from there. 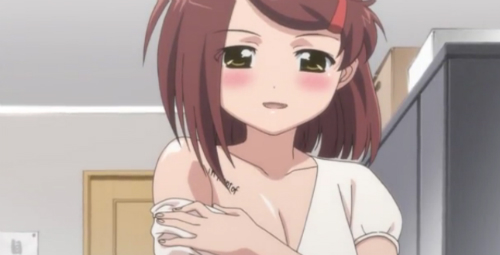 Ako is the shy counterpart of the twin sisters, and also the eldest of the two. She helps Keita study for his finals, and decides to get a little creative. She writes words all over her body for him to discover, even in places one wouldn't consider to write on.

Kiss x Sis is an anime that is chock full of ecchi moments. Every episode is another story, another adventure, and it seems more like a slice of life that has bits and pieces of questionable scenes thrown into the mix.