Sankichi and Osayo: A Genroku Romance

Story
Not much of one, more simple if anything. In terms of introduction there was promise. Artwork conveyed a lovely display of romantic affection. The main character's main problem was discussed. Although, midway or for the most part of the film that is when the movie became rather confusing or dropped. At one point there is a person roaming the street with unfortunate news but the art and story seems to have ignored that complete and went with a side story where the action was the opposite. Then you have the evil character come into play. He hears of this unfortunate news (which surprisingly may not have been done by his orders) and decides to act out what seems to be a random or spur of the moment plan. As for the ending it related back to the introduction and had a kindhearted conclusion. Had it not been for that kind of ending where it was not only kind but related back to the story i would have been tempted to give out a 2 or 1. What really killed this anime was not the plot nor the sound(or completely lack of) but the art.

Art
Art was far to bright. There were tons of obvious animation loops. Too many unrealistic cartoonist comedy used. Such as the complete slice scene. Ribs, we all have them. Well, aside from him i guess.
Helpful


permalink | report
Feb 13, 2021
1 of 1 episodes seen
Overall Rating: 5
The years of Genroku are generally considered to be the Golden Age of the Edo period. The previous hundred years of peace and seclusion in Japan had created relative economic stability. The arts and architecture flourished. In this setting, we come across Sankichi, a wandering vagabond who might have once been a samurai and his desire to impress the lady who thinks he is a coward for having (potentially) surviving despite the passing of his feudal lord.

I'm giving this a higher grade solely for how remarkably well it has been preserved in comparison to works of similar Japanese peerage, which makes it a good entry for someone looking to get a taste of the Japanese animation scene in the 30s to dip their toes into.

There are some oblique references to war - with the bird squadron trying to take down the big bad bandit, but anything else is a reach. This just seems to be a simple self contained story about a man chasing for love, saving the woman he wants to impress and gaining her favor.
Helpful
read more 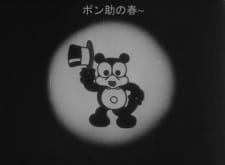