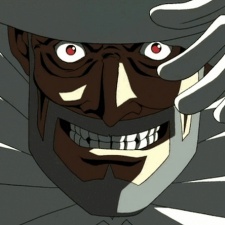 Dragonage2ftw Dec 12, 2015 3:22 PM
Polanareff couldn't attack Vanilla Ice and save Iggy because Vanilla Ice was outside of Silver Chariots range.

It was fantastic. Lots of depth and intricacies that make it clear it's a (loose) adaptation of a classic novel, and the Count is one of the coolest characters ever. I was a bit disappointed with the pacing of its final episodes though; felt too rushed. Top 10 anime material nonetheless.

Seyfert Jun 30, 2015 5:58 AM
It was for the ending, though... if they didn't include their relationship Cher's death wouldn't be as powerful... they were going to re-unite and suddenly it was taken away from them.

Seyfert Jun 20, 2015 5:10 AM
I always thought Hubb was interesting since he was the first to investigate all the supernatural occurrences...

Zadion Dec 19, 2014 8:20 PM
zacrathedemon5 said:
Very good first episode. Though I'm still waiting on an in-series explanation for why it was only a 10-year wait for the grail war this time.
I dunno if you actually got a proper reply to this in the thread cause like fuck am I checking, but this explanation doesn't show up until the Heaven's Feel route, so you won't be seeing it in the UBW anime at all.

I dunno if you know how the Fate universe works, but the visual novel takes three routes to fully explain the story; each route is essentially playing the same story over, only a small change at the beginning of each route leads to entirely different events and an entirely different story, so it's kind of like three different timelines. Heaven's Feel is the route that really explains the details of the Holy Grail War in depth. It's also the best route by a large margin, IMO, partially because Kotomine plays a huge role in it.

Gomen for text wall; I felt it was necessary. :P

Zadion Nov 15, 2014 8:16 PM
Episode 3 was also super atmospheric. The series as a whole is very beautiful indeed - the first half especially.

Zadion Sep 23, 2014 9:19 PM
Sounds like you should consider rewatching some animu broski ;o