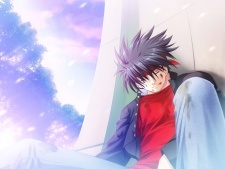 Okazaki_Ken Oct 9, 2019 1:22 AM
your danshi special review was good man. honestly I didn't read it! just pressed the Hpful button when I saw that 9(just kidding I read it and Iv already seen them)

Firstly I would like to apologise for the absurdly long time it has taken me to finally serve these membership cards up but I've managed to find the time and motivation to (hopefully) catch up with over a year's worth of requests!

You can find your membership card located here: http://dropcanvas.com/zd2cp
If there are any issues let me know so that I can get it corrected as quickly as possible.

Hinayushii Jun 8, 2015 4:32 AM
They're making sequels to the last few movies!!! The action was ok, but some other weird stuff happened :(

Hinayushii Jan 16, 2015 3:55 PM
Gogeta just looks awesome as SSJ4!!! I'm a huge fan of instant transmission, so I often make use of distance and then catch the opponent of guard, but I like close combat too :p

Hinayushii Jan 11, 2015 12:43 AM
Those sure are a lot of games!!! I haven't played anywhere close to that many... I also love using Kid Buu!!! I feel it's easier to transition from the combo attack to an ultimate attack to powering up. :p

I also like playing as Teen Gohan SS2 because of speed (and thag epic father-son kamehameha), android 18 because she's just awesome, and I guess Gogeta SS4 for such unknown reasons... :p

Have you played any previous dbz games? My favourite, don't judge, is budokai tenkaichi 3... :)

KyotoGraph Jan 8, 2015 10:51 PM
The potential the anime had really makes me want to know more about the characters so if I ever have a bunch of free time I would consider buying it. After all I have heard GREAT things about the VN for a while. Thanks for the suggestion!