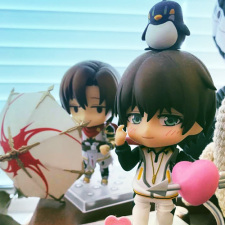 cleopatra77 Apr 1, 2014 10:34 AM
Your HxH review was amazing. Glad I am not the only one who thinks the new version sucks compared to the old one.

SamuraiMama Oct 20, 2011 5:32 PM
No one I know, who knows Japanese will talk to me much about it :( makes it hard to learn anything but I will look into the Genki programs you suggested ^_^

SamuraiMama Oct 20, 2011 4:52 PM
Lol yes it is easier to read in something you're already fluent in, I must say. I wish my high school had offered Japanese, but I'd have to have been closer to Seattle area to have more asian influenced classes. Oh well. I plan on learning it someday. For now I just practice on learning basic phrases and pronunciation, which I'm pretty good at, as long as I'm not in front of people lol then I'm shy and self conscious ha-ha.

SamuraiMama Oct 20, 2011 3:01 PM
So you can read some in Japanese already? I'm so jealous it would be such a help to be able to read in it so I wouldn't have to worry about waiting on subs being scanned lol.

I've loved Japanese culture since I was in the third grade. Such a beautiful country, if a little strange, which is why I like it so much ha-ha.

So what languages to you read manga in?

SamuraiMama Oct 20, 2011 1:31 PM
Swedish-Chinese, That's not one you probably hear very often Does that mean you know English Chinese and Swedish? I bet that is really fun! Wish I could do the same with my family lol

I understand that kinda stuff makes me ache too, I can stand it but I cringe at the thought of it. My mom having been in the medical field so many years, I'm used to see organs but it's still ick!

SamuraiMama Oct 20, 2011 12:47 PM
Yeah, it's such a shame that with such great characters Tite just totally took advantage of how popular the series was and ran with it loosing so many followers respect as he did.

Wow your dad too?! That must be fun, Family Anime Night! XD! I forgot to ask where you're from?

Honestly my Read List is pretty embarrassing with all the shoujo lol! I really do love shonen and I do read a lot of more adult stuff but I'm just too lazy to start anything that's like you said, a bottomless pit. So many just never seem to end. I have to hand it to the creator of Naruto tho, it is a super long series but at least there's an end in sight, unlike Bleach which has started over 5 times and One Piece which I fear will never end and I'll never catch up on as a result XD!

I find it easier to watch shounen tho and be lazy with manga, that's why it's so covered in shoujo. But as you saw in my To Read list my interests are more varying ^_^

That's really cool your sister likes to read manga too! I'm getting my baby sister hooked on anime and manga, (already have her a pro gamer lol) but I don't know too many, especially in my family who actually enjoy it. A cousin that loves DBZ and that's bout it ha-ha.

Thanks for your rec's too, I'm pretty open to anything that isn't yaoi/ yuri or demonistic/ ghost type stuff. I don't mind horror or paranormal tho just overly sensitive to possession/ haunted genres you know?

SamuraiMama Oct 20, 2011 8:46 AM
4-500 volumes O_O woah... lol I didn't think you'd own everything you'd read but that's still a huge chunk ha-ha. That's pretty cool hope you bought most of it on sale I can't even imagine buying it all full price. I have a friend on the adult swim message boards, last I checked she had around 500 manga, by now it's gotta be close to 1000 her room is supposed to be nothing but anime manga and swag &gt;_&gt;

Okay rec's .... Ha-ha I'm guessing you're not too picky about the genre? I would recommend Usagi Drop most definitely! Ludwig Revolution is crazy but in a good way, Model, Shinshi Doumei Cross, Shuukatsu!! - Kimi ni Naitei...If you don't mind girly manwha Can't Lose You and Some good one shots and short manga I'd rec would be; Sister Generator, Hotel, Adventure Boys, Rikon Choutei.

Some of those are longer than 3 books but they're all finished and you can find them online to read. I don't like recommending stuff I haven't finished because who knows if it ever will be finished right? My big thing is I have to know something is completely scanned online and finished before I start reading it. I have made the mistake of not making sure a few times and it's just endless frustration not being able to finish what I started lol!

What manga would you recommend to me? I couldn't even to begin going through your list it's so long XD!

SamuraiMama Oct 19, 2011 7:59 PM
Ha-ha that's still an amazing amount of manga lol Do you still read in a steady stream or is it not as easy to read much anymore? How much do you actually own after collecting so long?

I was looking at our lists, I'm surprised I've actually read a few you haven't XD they're probably just one shots tho ha-ha, I'm lazy and read short manga usually.

SamuraiMama Oct 19, 2011 3:20 PM
My jaw literally dropped when I saw how much manga you've read! You really do mean you'll read anything! I am impressed, how long have you been reading manga?

eternalmetal Oct 2, 2011 9:11 PM
Great review on the new HxH series, I agree with you entirely. As a big fan I cant wait to see how they modernize the story and animate it, but I cant help but feel they desecrated the greatness of the show that the first anime portrayed so excellently.
All Comments