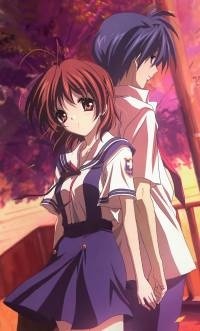 sarahsillysloth Jun 9, 2011 6:58 PM
I love your anime choices.
can y7ou recommend any romance animes that are as good as clannad?

002173 Mar 18, 2011 9:23 AM
Hi! i read your Clannad review, and i think, after reading it, that you have a good grip on the series. I wanted to ask a few questions because i was utterly confused about some things in Clannad, to the point where i grew impatient and was tempted to skip ahead to a new scene. Firstly is FUKO-CHAN. i was fine with her as a character up until they started talking about her as a ghost, and the end of her arc when everyone was getting emotional felt weird because i had no idea what was going on. She was a ghost, but could be touched and could touch them, apparently shes from the future? or something? and did Fuko die in the hospital or something in the end? i did not get why her disappearing was such an emotional thing. i wished i could have understood her character and situation so i could enjoy her arc more.. but i didnt.
ALSO, the last episode of Clannad (24) where all of the sudden the grey haired girl is the girlfriend of Tomoyo? that came out of nowhere and i after watching that episode i pretty much told myself that never happened because it made no sense at all. not to mention ending the series on a wierd note..

please help me understand all this. i think its rediculous that something like Clannad could trip me up like this when i was able to make perfect sense of Neon Genesis Evanglion. its shamefull.

I would be very glad if you could become my friend.
I really like your taste in anime and i hope we can get along well.
XDD,

So how are you, anything new recently? ^^
All Comments