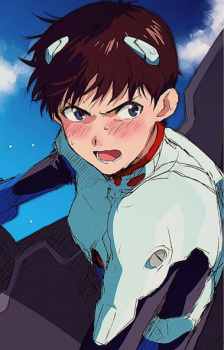 ryoryx Oct 12, 8:21 AM
Exactly. My views in an abstract piece of art are to value the open to interpretation more than the concrete meaning they are trying to convey being heavily based on metaphors and symbols. It's sad that I only find people bashing or praising it, but the analysis that was done on the internet was very superficial and deserves a better hand to pick it up.

“I personally enjoyed the show and thought it was pretty creative in telling coming of age stories, but I do think it was too esoteric for its own good which impeded the anime's ability to flesh out themes”

As in it’s enjoyable if we prefer abstract and surreal themes and anime nowadays severely lacks this theme since past few seasons, so probably sonny boy worked as an “Oh, as long as we have this one, this will do”. Not saying they didn’t do any spectacular job to capture the theme as the praise goes, it was good enough, but as time goes, it becomes extremely repetitive and forced to fix the puzzle in it. And it seems, this anime had attempted to reach as a Tatami Galaxy rip-off but ended up in the region of Wonder egg priority for me. Solid plot, wonderful animation, but eventually gets lost in predictability, which is where I would say, the show lacks. Also, character-wise, they were pretty one dimensional, and sometimes overlaps with one another, the quiet kid in the back, the rebel, the one who will change the world, saying that its target audience is teenagers, or maybe early adults, relatability is a concern, but still, something that was used over and over and hence, saturated. As to compare, Oddtaxi here did an exceptional job to craft out wholesome characters where everyone carried the show on each their own and produced a masterpiece.

Personally, I liked the first half more, with the students' attempts to return home, but as the episodes progressed, more and more they decided to give up, until only Mizuho, Nagara, and Nozomi trio, remained eager to return. Following the death of Nozomi and the reappearance of Rajdhani, the remaining couple decided to carry out their plan. But the best part was where Nagara and Nozomi meet near a train station in the last scene. Nozomi finds a wounded baby bird and asks Nagara to look after it. For my ‘middle of the road’ takes, I would say the symbolic and metaphorical stances were impressive but nothing so jaw-dropping to be memorable as a creation.

horridhendy Aug 11, 1:04 PM
I hope you like Natsume Yuujinchou - if you do then there's certainly a lot of content to watch!

S6 is also great, I really think the main series peaked with S5/6. It's always such a shame to me that they got rid of old-style Untucked, it was iconic. S13 got a lot of flack but I enjoyed it, it was a bit long though - I really liked Symone so I was happy with how it all turned out. I haven't seen the Spanish season yet.

You're going to be even more surprised then when I tell you that Natsume Yuujinchou actually has six seasons and two movies! Mushishi is a tricky one, it's the sort of anime I feel bad for not liking more, which rarely happens because normally I don't care but Mushishi feels like the sort of anime I should love and I just don't. I didn't dislike and I can appreciate it though.

Ooh, that's a tough question. Season is a little easier because it's AS2 for sure, although UK2 is exceptional (and because I'm from the UK, I love all the references to classic British shit) and I love S5 too. As for my favourite queen, I feel like it changes a lot but Alaska, Bimini, Shea, Katya, Bob and Alyssa are some of my faves - all for very different reasons. How about you?

horridhendy Aug 10, 10:30 AM
Oh yeah, I mean Aja aggressively complimenting Valentina "You're perfect, you're beautiful..." was also iconic. The only other one I love that I can really remember right now is Shannel's "No-one has told me I'm beautful..." - that one is brilliant. I love a good monologue, another one of my favourites is from Tiffany Polland when she was on Big Brother, the one about Gemma Collins ugly shoes - you know that one? So good.

Oh Natsume Yuujinchou, ugh it's so good. I'll be honest, I wasn't crazy about Mushishi either, I thought it was a little too placid and Ginko was non-descript. While I can see the similarities to Natsume Yuujinchou, I personally find Natsume much more enjoyable.

Natsume is such an endearing character - his backstory and how we see him grow across the seasons is one of my favourite things about the show. Also, Nyanko-sensei is funny and is a greater counter to Natsume. Plus, I really think it has some of the most consistent and beautiful story-telling in any series. The OST and overall vibe of the show just adds to this. I will say this though, I don't think S1 is its best showing, it really steps up from S2 onwards I think - that's why I would recommend at least watching to the end of S2 (bear in mind I feel like S3/4 is its peak).

horridhendy Aug 9, 5:22 AM
Ugh yeah - that is such an iconic monologue. There's a few great ones from RPDR but that one's the peak imo. Yeah love Mononoke - Given is also brilliant too.

Thanks! Yeah, I'm pretty pleased with it. I really like your profile too :)

Suna_Kujira Jul 9, 10:53 AM
Welcome to Critics and Connoisseurs. Please go through our Club FAQ. We encourage all our members to be active in our You Decide, Spotlight Forums and keep up with the activity requirements. Here is a link to our Old Spotlights to help you familiarize yourself with titles that have been nominated in the past. Again Welcome!

Stephen_MK Jul 1, 10:37 PM
I have a section on my profile that I add all the webtoons I read, completed, plan to read and even the ones I dropped. If you're interested, you can check it out and take your pick. I have lots of webtoons there and even BL ones. Nothing really came to my mind right now since I just woke up half an hour ago, so I can't think of any recommendation.

Stephen_MK Jun 29, 10:55 PM
Yeah, of course, not their favorite, but still a genre they enjoy. That still counts.

Stephen_MK Jun 29, 1:07 PM
There are a few straight guys here who watch BL tho. One of them being a friend of mine. Although he's a massive cunt.

Stephen_MK Jun 28, 10:52 PM
Hahaha, what do you mean kinda clear based on your profile? It wasn't that obvious, at least not for me. If you had like 10 pics on random half-naked anime dudes, then yeah, but your current profile doesn't leave any kind of trace that would lead to that conclusion. You have a very cute profile anyway.

Stephen_MK Jun 28, 2:49 PM
I was reading your profile and came across this "Oh and I'm assuming this goes without saying but I'm gay lol", and it took me by surprise hahaha.
Found you on my friend's friend list. I'm talking about our mutual friend Nedu-kun. I was checking his friends and came across your profile and it looked pretty cute, and saw that you also like shounen ai, so I thought I should keep reading and then I came across that, hehe. It really was unexpected. I mean, one moment you were speaking about the languages you know, and then BOOM, you dropped a bomb with no connection to the languages, lmao.
I also noticed you liked Made in Abyss. I have to admit, you have wonderful taste. I LOVE that anime, and I can't wait for the next season to air.
Anyway, just wanted to stop by and say hi. Also, nice to meet you.