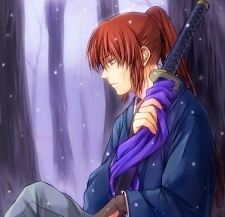 Reali Feb 10, 10:19 AM
Your GoH review was funny and was gonna comment that and then realized you're a sasuketard so go fuck yourself. jk.. or not?

AcbSnakeDemon Jan 10, 9:23 PM
Your GoH review was hilarious. I’m literally plowing through them just to get kicks out of them

SaberHotMikasa Dec 3, 2020 7:37 AM
Imagine making troll reviews for the sake of hating on a simple anime lmao Jesus, The God of Highschool isn’t even that bad.

Vagabond is such a beautiful self-journey of maturing through oneself and others, I'm sure you're busy for long times, and taking out time to read can be difficult but vagabond has too little text and most of it is just visual storytelling. So, I'm sure you'll like it

NotDex Nov 21, 2020 2:33 PM
Zara janai, Zura da!!... oh wait it's Katsura! Nvm, that was a bad attempt on using that iconic line but I just wanted to xD. What did u think of that bathroom battle in that arc? haha. Benizakura? Hey, that's just the beginning! There are so many main story-line arcs that are wayyy better... Shinsengumi Crisis, Yoshiwara in flames, Red spider, Four devas, COAN, SA, FS, SS arcs... Benizakura is just a warm-up compared to these NO CAP. S1 is just the tip of the iceberg, it only keeps getting better. S4 has 2 of the best arcs in modern anime history... I don't understand how it's not the highest-rated anime on MAL. Gintama seasons achieve the highest ratings but soon as they do they get bombarded with 1 ratings by salty FMAB fans who can't see any other anime surpass their fav show. S2 was once sitting at the top with a rating of 9.43! IIRC, that's the highest score any anime or manga has ever achieved on this website. I'm so fucking glad that you're liking it, and as you're liking it now then you'll surely love it a lot in the upcoming arcs and seasons.

Sadly, I didn't watch it all in one go. I'm very bad at bingeing shows or eps lol. I already liked it a hella lot it but I think I'd have liked it even more if I hadn't read Vagabond. Vagabond has raised my standards for samurai stories by a huge margin.