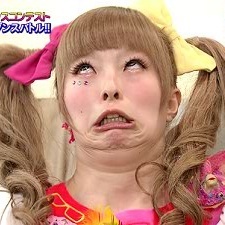 alphacompton Sep 2, 2015 6:13 AM
I actually agree with you about HakoMari. I wouldn't score it so low , it was of average enjoyability to me but I was throughly unimpressed for such a highly rated novel. I was glad to see I wasn't the only one because I totally understood the story going along, of course I couldn't tell who created the box right away but it was pretty obvious that it would be similar to Haruhi's endless eight and that someone's desire was not fulfilled so they wanted another chance and whatever they wished for was not possible so they were stuck on a loop. The character Maria was not very appealing to me either, she is underdeveloped for a character who has lived for over 80 years .

zOblivion Sep 1, 2015 6:49 PM
Didn't see a single logical syllogism of any sort as to how Maria was bad. Very childish review. Don't look into a career as a critic or author.

CandyRat Nov 7, 2014 8:50 AM
Hello, I would be interested to know why you hate Tokyo Ghoul? I'm not the biggest fan either but it's just something that I watched quite recently. Personally, I thought it was just alright; the kind of anime where I can at least understand why other people can get into it. But what about this anime can evoke such negative emotions?