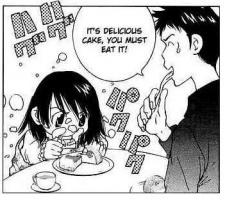 Salmissra Feb 26, 2011 7:56 AM
Hello~ this is just a random comment. I'm always seeing your avatar cuz you posted before me in the Ranma 1/2 discussion (and others I think too) so I just thought I'd check out yur page~ ^_^ also I always like checking that anime compatibility thingie.

Retro8bit Sep 25, 2009 8:41 AM
Dude you might be right, maybe I should bring some ear plugs and a blind fold. This way I won't be clinically dead for the hour.

Darn, have I been racist towards cake again? Sorry about that, I once had a tragic tail regarding a cake, and I don't want to go back. But I suppose I should get over it and move on. *weeps*

Well I am kind of a n00b when it comes to the technical stuff of my computer. What exactly is a "platform" regarding one?

I could try to not us numbers in my equation.

How cheddar relates to me is:

Ummm...ummm...darn, this is why math is my worst subject!

We do the whole "love" thing a bit differently in my tribe. Basically we put a pie in front of any member who is looking for a affection, and have them listen to the 80's song "I'm just dying in your arms tonight". Some might consider it to be "cheap" love, and we're shallow we know it, but the tribe members don't seem to mind...too much.

That usually is the problem when I try to play games on emulators. For some reason or another it doesn't want to work. Either because it doesn't understand the program I downloaded, or gives me a bunch of technical mumbo-jumbo that I don't even understand. Well, I'll let you know how it goes anyway.

Changing accents? Now why didn't I think of that?

Well...I can try and make the answer non-interesting, but am a bit perplexed at how to do this. The formula was so engrossing that many have actually compared it poetry. Saying, and I quote: It's like poetry in motion. Could it be that their brain cells were unknowingly killed while trying to comprehend it?

Food is quite delicious...I suppose. But yeah my "tribe" doesn't really care too much for the consumption of nutritional dietary objects such as what you stated in your description. We prefer to live off of affection and the like. I think most other cultures would refer to this as "love". Or in our language--flebenbore.

Well all I need is an emulator to play some of the old 2D arcade games (Simpsons Arcade for example). So there shouldn't be much demand for my PC right? I don't plan to play any 3D games as of yet. Will this still work?

Dude I am the exact same way when it comes to reading. There are even times that I read it out loud and I am thinking of something else. Only too look back and think: wait...what was I reading again? XD

Retro8bit Sep 20, 2009 2:28 PM
Yeah sorry about that man, but someone already gave me the link to the "Old Crocodile". Guess they must have seen my comment on your page. Thanks anyway though. The title had a good story, but the whole eating thing was kind of morbid to me. Yeah, guess you can tell I don't watch much Discovery Channel! XD

Oh okay, I think I understand. Where do you download your emulators at? I have been trying to get into this sort of thing for a while, but for some reason or another it never works right (I get errors and what not). Is there an easy step by step way of doing it? Any help would be greatly appreciated. :)

Oh I do know the answer...maybe. It's just that the answer is so shocking, I thought it would be best to...censor it?
All Comments