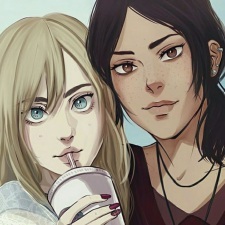 Well, I realized I was placing a series wrong... this "less than #700 in popularity"... silly me got a 6##-something series.. .but then I realized what it erally was, so I changed to one that's #2###-ish I guess
xD So, let's make this challenge properly this year! :P

I hope I don't screw it up! I suuuper double checked everything xD

MisaoAino Dec 19, 2019 7:21 AM
Now I'm in charge with another admin of the Group Watches, as well as I continue with recruitments, forums, welcomings... :P

I haven't seen much gore. Not because I don't like them, just that I don't know many tbh. But I like seinen stories, so yes. I'll definitely will take a look at it ^.^
Wasn't there a game? Maybe I am confusing it with something else

I guess I'll start with the anime. Is it as good as everyone say?

Ohh, still need to start with Tokyo Ghoul xD ReLife was good, I liked it ^.^

MisaoAino Nov 28, 2019 12:11 PM
Which one is My hero?
Bungou is about a bunch of people who have special abilities. Some use their abilities for the good, other for the bad... The main story is settled in Yokohama, where they basically show you the ability useres who work for the government, then you have the MCs, which belong to a detective agency, and the you have the Port Mafia ;) But you'll also see people from other parts of the world... it is super fun and entertaining. It has lots of action and the characters are reaaally good :3
About FuruBa, yes... you can say it is a version which wants to be more loyal to the manga. The first season covered basiaclly everything it was covered in the first anime. It was really amazing. If you liked the story, then you should give it a try ^.^
Carole & Tuesday wasn't as good as I expected to be :( I lost hype during the show, and the ending was... nice but not awesome

About the ones I liked the most, then everything related to LotGH must be there xD And also really likes Demon Slayer! I'm really looking forward to watching that movie! I'm also waiting to see some action in BnHA 4th season xD
So, as a seasonal watcher, may I list them per season? Apart from the ones listed above... In Winter, I liked Dororo, My roommate is a cat. Neverland was very good too, and of course I enjoyed the second season of Fukigen na Mononokean :3 I need to say Kaze ga was awesomeeee, even though it started last year and finished during Winter season
During Spring, I had my Bungou boy back <3 and discovered Kono Oto, which is having it's second season now ^.^ - Fruits Basket was back! And it will probably be MY anime of the year <3 - Mix was a bgi surprise! It was really amazing too
About Summer, Vinland Saga (which is still airing) is very good. Given was amazing >.< I'm still fangirling so much and Kochouki was a good surprise too. Fire Force is good too
This season, Chihayafuru being back was the best news :3 ... but maybe it is still too early to say which others will be memorable for me :P There is quite a bunch of candidates!

About disappointments? Well, most of the shows I didn't like were shows I wasn't expecting much for from the very beginning xD But I'd say I expected more of Carole&Tuesday, for example

The challenge is divided in difficulty levels, depending on the amount of them you take. Those challenges are about watching a complete anime series and they mostly are "watch a show which is tagged as 'fantasy'", or "watch a show which aired during the 90s"... that kind of stuff ^.^
It is good if you use it to watch those shows you have on your ptw and need an excuse to watch xD

I have finished an annual challenge that's is done on the Latinamerican club :3 so I was thinking about starting something different, beside the seasonal anime I normally watch xD
But I realized it is was going to be tough, so I started something different on the Anime Watching Challeges club! I guess I'll pick up MAL's watching challenge next year and give it a try!
Lol! How bad xD ooof I guess I will have to read that suuuper carefully so I don't make any mistakes xD haha

MisaoAino Oct 23, 2019 3:35 AM
Hi! How have you been?
I have finally finished with the other challenge I was making xD
Do you think it is late to start the other one? XD
Are you doing it? How is it going?

Gator Mar 31, 2019 11:33 PM
It also was pretty forceful, I mean that dude really did not want that to happen but he still did that to his best friend xD

Hehe yeah I already saw some GIFs of the Grand Blue girls in a bikni... that looked neat :>
I'm not aware something like "unwanted nudity" exists lol

I mean there are non-violent tsundere who are okay, like Tohsaka Rin from the Fate series.
Shinji went too hard?

I could use something like that again, but I guess it will never happen xD
They are dragging the show way too hard currently, the pacing is quite bad. Also the art and animation dropped in quality, it's only good in specific fighting scenes.

Gator Mar 18, 2019 12:59 AM
Though I'm sure there are enough other anime with a 1000 year old loli, but I tend not to watch those shows in general xD
That was probably the most uncomfortable scene for me, so I'd rather forget it haha. Yamato had a lot of really cute scenes ^^

Group bath? Can be nice as well, but sometimes I actually prefer a bikini or bra to being fully nude.

I just don't enjoy violent tsundere characters at all, so she's a red flag for me.
I also remember his dad being quite an ass, but that's pretty much it.

I think that was when I transitioned from studying to working and I had like three months of freedom or something ^^
The first arcs in One Piece are reaaaaaaally good though, I can recommend it. At least unless you hate never-ending anime :3

Gator Mar 11, 2019 12:24 AM
Especially the protagonist, couldn't be more of a loli if she tried xD
Finished it yesterday, it is a really great show. I laughed a lot and it has a lot of cute scenes. Only the last few episodes were a bit boring, thus I only gave it a 9/10 ^^
Yeah the MC was a lot of fun to watch, so was the female protagonist. No tsundere-shit haha

Bikini scenes are my favourites though, so I'm sure Azusa will provide enough service for me ( ͡° ͜ʖ ͡°)

I hear a lot of people hating on Shinji, so I guess there must be some truth to it. Though when watching it I didn't find him especially annoying, would rather throw that redheaded tsundere out instead of him xD

I think I watched about 200 episodes in one month, that was some nice vacation haha

Gator Feb 27, 2019 11:16 PM
I see, well the characters do look a bit more grown up as well. In New Game they still looked like children partially ^^
Will get around to watch it soon I think, maybe after Ore Monogatari :3

Yeah it looks pretty dope. Also it has some fanservice I might enjoy as well hehe
KonoSuba thought is just comed-gold

It's also made by Madhouse, so the animation should be quite good. A good OST can also really improve my opinion on a show, so that's another plus ^^
It's been soooo long since I watched NGE, I barely remember anything about Shinji anymore haha

Hmm I'll think about it, still got a lot to watch on my PTW list. Ore Monogatari will surely entertain me for another two more weeks or so and then I have Shirobako as well xD

Yeah, I watched it as a kid on German TV and then had a long break. About 6 years ago or something I started watching it again and since then I'm really into anime :3
All Comments