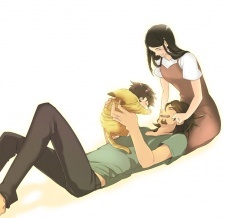 ladytea Oct 6, 2013 4:01 PM
We would like you to invite such an amazing person like you to our new otaku forum. Your contribution would be highly appreciated. Are you a cosplayer? Share your pictures with us. Do you like writing reviews? Maybe you are a poet? We will love you for sure. Yuuhou wants you.

burningSunset Jul 17, 2013 6:17 PM
Hmm, I guess Kanon. It was well done! Clannad also was great, although I don't know if it classifies necessarily as a harem. As for reverse-harems, definitely Fushigi Yuugi. That's the anime that got me into anime. Apart from that, I haven't encountered any good ones in recent years. And you?

RedenReden Jul 16, 2013 7:22 PM
So far, I'm watching Sunday without God, Free, and Gatchaman Crowds. I might add a few more but I'm not sure yet. What are you watching? Also, Otakuthon is super fun, I've been going for the last four years. Not sure if I'm gonna go this year though cause a lot of my friends are moving away.

burningSunset Jul 14, 2013 6:47 PM
Nah, not really into harems. Reverse harems perhaps, if the plot is solid enough, but harems are just too much lol.

burningSunset Jul 11, 2013 3:50 PM
Good for you! Usually I need to get hooked on one great anime that will make me start my marathon again. So since I've seen so many recently, I think my brain wants to take a breather now lol. I checked the summary for the world god only knows, but it looks kinda too harem-ish for me lol XD. Is it based on a dating game?

burningSunset Jul 10, 2013 2:27 PM
Hey! Sorry for the late reply! No, I think Shakugan the anime is average at best, but I've always liked Shana's fiery red hair and I wanted to buy the wig lol. And I was def gonna buy them online; I don't have a sewing bone in my body. Well, I haven't been watching anime lately either because I don't know what to watch lol. Seems like I've seen all the good ones, which is kinda sad :(

RedenReden Jul 3, 2013 10:35 AM
Ya, I was a little disappointed with the spring anime. A few looked good but didn't end up being that great to me. But a few summer ones look good, so hopefully I'll get into them. How was anime north :O ? I've always wanted to go.

RedenReden Jun 22, 2013 3:53 PM
Not really, everyone's talking about Shingeki no Kyojin but I thought it was kinda meh. What about you?

burningSunset Jun 12, 2013 6:33 PM
I was gonna be Shana from Shakugan no Shana, and my friend Shuhei from Bleach lol. I had a feeling it wasnt going to work out because he tends to be very last minute about everything, and so he was again when it was time to buy the outfits. I was busy with work so I couldn't take care of it either.
Yes, I definitely like anime that make me ponder about things.
So what are you watching right now except for Attack on Titan?

burningSunset Jun 4, 2013 3:20 PM
Not sure why I never ended up going, actually. Last August, my friend and I made plans to go, and we even decided to cosplay for it, but it just didnt end up happening. I'll try and check it out this year if I'm not too busy. Oh, Black Lagoon is awesome! Plenty of kick-ass characters! Fafner sounds familiar, but I've never actually seen it. You'll let me know if it's any good. Although, if it's an Evangelion rip-off... it doesn't bode well. Already I think that Evangelion is overrated...
Shinsekai Yori was a very interesting ride! At first, I thought the story was pretty interesting, but some for reason the animation started going downhill big time. I had to force myself to continue it, and I'm so glad that I did. It has a very thought-provocative ending, and the story is very original. I was still thinking about it today after work. It left a deep impression. You should check it out! (Another to add to the very long list, I imagine XD)

burningSunset Jun 2, 2013 5:43 PM
Yeah, I remember the feeling of having that much time! Now there is barely any to get some sleep lol XD. Nice! I've never actually been to a convention. I've seen people cosplaying at the Montreal one, but I have never actually gone inside. I'm not that interested in buying series when you pretty much have access to everything on the internet lol. Besides, if you buy the DVD, is it English dubbed or subbed? I'm sure you have come back from the convention now. How was it? :) Did you get a series this year?

burningSunset May 21, 2013 7:27 PM
You're right. There's always an endless supply of anime to watch! It's surprising when you say you have a hard time catching up with them. How did you even get to watch over 700 of them in the first place? XD As for me, I'm watching a couple of episodes per day... when there's only 24 episodes, it goes by fast. Yeah, Zetsuen no Tempest is the best thing I've seen in awhile. I just finished Hyouka, and I gotta say, it reminded me of PCP from Bakuman. In PCP, the characters were trying to commit little insignificant crimes, and in Hyouka, they try to solve insignificant trivia XD. I got pretty bored with some of the story arcs because they were stupid. For example, someone will wonder "there was something white on that person's ear, but now it's not there anymore. What was it, and how did it disappear?" and the whole episode will be built around this. But they could have found out in 5 mins if they had just ASKED the person -_- Anyway, I don't know if you've watched it, but you will probably know what I mean if you do. I don't even know why I just rambled about it, lol.
Oh, and Anime North? Can't say I've heard of it. What is it? A convention?
All Comments