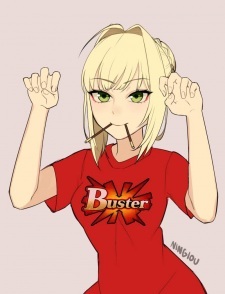 ChadAznable0079 May 11, 2017 10:07 AM
True enough I suppose, I imagine that something like black butler in dub would be a chore to sit through in English dub with the crap Fake accents being done by the American cast, for an anime fan from England that is.

So have you really no watched any anime for a few years? Or just not updating the list?

Given that your a LOGH fan are you at all optimistic about the 2017 anime? a trailer is suppose to be released in September, I bet it will be CG heavy, like tytania... I'm hoping IG gives it their best effort though.

Josh May 10, 2017 7:17 PM
I might have, but more likely you don't remember me due to me not being there very often. I'd be happy to join your discord channel, though (as before) I'll probably only drop by on occasion. My username is Josh#4660. I don't know very much about discord either, so don't worry about it, haha.

Josh May 10, 2017 5:05 PM
I completely forgot about #CharAndTea until I saw your profile just now. I wasn't a regular like you and Anno, but I dropped by every now and again.

ChadAznable0079 May 7, 2017 11:39 PM
Ya, I would call the main siblings constructs more then characters, it seems manipulative honestly and I don't like it very much.

Thanks mate, I'll borrow my friends copy of aria in a few weeks, I've been meaning to check it out for some time and I figure it's time.

Your from the U.K., cool what's the anime scene like there? do British anime fans not like how almost all dubs are American ( with a few exceptions) and by default have American accents, I'm curious if that's a common complaint in the British anime scene. Also I think it's neat that they get some physical release of shows that we don't get here in the states.

ChadAznable0079 May 5, 2017 10:51 PM
pardon the out of no were comment, hello im kurt, i checked out your list and laughed abit when i saw what you had to say about grave of the fireflies, it is very boring and not nearly enough people think that.

also do you recommed aria?

JustaCrat Apr 22, 2017 2:15 AM
Because it actually describes a sound definition.

JustaCrat Apr 22, 2017 2:07 AM
Ultimate identity (z) exists metaphysically. That would be the objective identity (x) plus all the subjective identities (y's). Cause and effect is merely logic working objectively in physical reality. Existence is axiomatic. Being is qualia. Possibility is the utility of logical space. Space always exists as a premise of human thought.

About force of reason, sound philosophy inevitably forces people to act from it.

And I'm always civil. It's the mentally ill people who aren't.

JustaCrat Apr 21, 2017 9:51 AM
It wasn't meant to refute postmodernism. It was just meant to combine some of the ideas that fell under its category and highlight postobjectivism.

Metaphysics is contemplated or unknown reality that is guessed to exist outside the perception of sense. Maths and consciousness are not metaphysics; those are a rational model under logical space and a physical phenomenon respectively.

Stacy's IQ is clearly categorised. The nature of my interviewer's attitude was to elucidate sense and provide satire.


Your third scenario and hypothetical interlocutor is a little more realistic but still suffers from a lack of research. While it's not uncommon for liberal democrats and liberals to believe in a qualified right to free speech, you frame this in terms of minority protection and equality, which is not a common means of justification.

The most common means of justifying such a stance is that it concerns minority protection and a balance of rights -- that is, minorities are less able to enjoy the rest of the rights they are entitled to (because free speech is not the only liberal right) if hate speech is allowed and people partake in it. There is a second argument to be made qualified free speech is a more realistic right in terms of containment of unreasonable viewpoints and stability (the reproduction of a just society) -- if unreasonable viewpoints espousing free speech were allowed to promulgate unchecked, then we endanger the basis of our just and legitimate basic structure. In effect, and while I don't think you intended it, you make a strawman that you easily show is mistaken.

I think this is wrong.


Thank you for your in-depth reply.

AnnoKano Apr 12, 2017 12:57 AM
Nah, just haven't got internet at new flat yet and trying to use phone data sparingly. I'll be back in a week or two.
All Comments