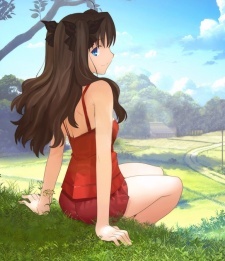 Tanzaku Jan 19, 2013 5:42 AM
Yeah, I've been very busy. Besides the first episodes of Chuunibyou and Little Busters!, I haven't watched anything last season =( I will check out those anime you mentioned one by one once I start finishing off my shows from 2012. But I'm definitely watching Robotics;Notes "soon".

This season's a bit dry, you say? Well, I guess that's somewhat of a good thing for me... I'll just pick up Mondaiji-tachi and probably one other (Hmm, Imai Asami eh...)

I can't believe I've watched less than 5 anime episodes for the last 5 months. Definitely need to check out the fall 2012 anime I missed as well as finish off what I started.

Tanzaku Aug 11, 2012 1:22 AM
I really enjoyed reading the first SAO light novel, even though the ending was not what I was expecting. (Also, chapter 17.5 never existed!). I like how SAO's game mechanics are explained in detail in the book, which makes all the "technical" stuff a joy to read for us MMO gamers. It's what I find missing in the anime, though I do understand how difficult it is to animate something that only works well on paper. Reki's take on MMO community in the book is somewhat spot-on, I agree. And he taught us a very important lesson: never join a new MMO (no matter how highly anticipated it is) on launch day when you're required to use a hardware device that has the capability to kill you!

I've heard of C9. I wish I have some free time to spend on an MMO right now but I've been busy lately, unfortunately. I did manage to play a little bit of Guild Wars 2 during its final beta weekend though.

I'm watching the same shows you are for this season, plus Campione! and Total Eclipse. Favorites are Kokoro Connect, SAO and Campione!. No plan to pick up anymore anime at the moment. You know, weekdays would be a good time to be watching/finishing old shows now. If only I weren't so busy! >.<

Tanzaku May 26, 2012 1:52 AM
LOL I saw that Sugita-gets-slapped gif somewhere before but I didn't know what show that was from. So thanks for telling me about Tokyo Encounter. Already watched a couple of episodes and I'm enjoying it a lot. I'm sad that "Tomoya Okazaki" has forgotten about Tomoyo when even Kanon's Yuuichi (Sugita) knew who she was. I mean, if there's an anime character I want to be my girlfriend, it's Tomoyo Sakagami (It's Rin Tohsaka for you, right?). Perhaps Rin's seiyuu Kana Ueda will appear on Tokyo Encounter someday since she's a rather hardcore gamer. Regarding Yuuki Kaji, it definitely sounds like he's being typecast for that sort of role, just like how Rie Kugimiya can't get away from tsundere characters.

I don't know what anime I can recommend you this season (that you're not already watching or plan to watch) but you can try Jormungand and/or Sankarea and see if they are for you. If you don't mind something from last year, then you should pick up GOSICK. I consider Ao-chan's performance as Victorique in the show to be one of her best.

I'm with you on the things you said about the "seiyuu/singer trinity". They love what they're doing and they care about the fans. I don't know why it hasn't happened but the three of them should be in an anime together. And I mean a decent anime, not some fanservice/ecchi anime. Minorin has enough roles in those kind of show already >.<.

Yoko Kanno definitely had a big influence on how awesome May'n's songs sound in Macross Frontier. May'n has a great voice. It's just that I don't think many composers know how to make full use of her talent like Yoko does. While May'n's songs outside of Frontier may not be as impressive as her Sheryl Nome ones, there are two that I really like: Shangri-la's OP and Ontama!'s OP (duet with Masami Okui).

It's great that not one but two of Reki Kawahara's novels are being made into anime this year. I've always wanted to see more anime like the .hack series and Reki's Accel World and Sword Art Online are just what I need to scratch that itch. We just don't get enough stories with a MMOG vs. Reality setting.

Aw man, J.C. Staff... *sigh* [my rant removed because it became pointlessly long lol] Long story short, I don't have anything against the studio nor its staff. It's just that I'm worried they will ruin a perfectly good story because while any studio can turn a visual novel into an anime, very few know how to do it right. I'll still watch LB! when it comes out, and pray that it doesn't disappoint...

Nice to hear that you got a PS3. How are the games? I know Tales of Graces f has been getting positive reviews but are you enjoying Resonance of Fate? It seems people either like the battle system or hate it.

Robotics;Notes is indeed 5bp. and Nitro+'s third sci-fi visual novel after Chaos;Head and Steins;Gate. Funny how it is getting an anime in October when the VN itself won't be out until the end of June. I assume Production I.G already have access to the full script, or else it's going to hurt the quality of the anime.

Seiyuu do actually affect what I watch nowadays. You pointed out some good examples. Like you, I watched Dog Days because of its impressive cast. Symphogear too. If it weren't for Nana Mizuki and Aoi Yuuki, I wouldn't have started watching it the same the season it came out. I picked up Horizon because of Minori Chihara, only to find out that her character didn't appear much (in the first season anyway). Almost stopped watching it after 3 episodes. Glad I didn't though as the fights in the later episodes made it worthwhile. I'm a little upset at the roles Nana and Minorin get these days, but I'll talk more about that some other time. I want to say I'll watch anything with Kana Hanazawa in it but that would mean I have to watch every single anime that comes out now (a slight exaggeration), so I can only try. I'm also a big fan of Maaya Sakamoto.

Animation studios (KyoAni, Shaft, P.A. Works), music composers (Yuki Kajiura, Yoko Kanno) and directors (Ishihara, Shinbou, Hosoda, Shinkai) all can influence what I watch as well. Never really cared about writers, until I saw Madoka Magica. Now, I keep an eye on everything Gen Urobuchi does. Whether a story is original or not doesn't matter much to me, as long as it's interesting. Even cliche stories have a chance to shine and catch my attention.

Tanzaku Apr 4, 2012 11:03 AM
Wasn't Maeda working on a project related to Angel Beats!? There were speculations of him planning to make a game based on AB!, and there are fans who want to see a sequel anime as well. As far as I know, he wasn't directly involved in any of the anime adaptation of key's visual novels, except for the time when he had to write new arrangements for the songs he composed. So I don't think he'll be working on the LB! anime either. I admit I do want to see his new work soon. Preferable an anime.

I was hopeful because KyoAni has expressed interest in animating Little Busters! a while back but I should start to accept the possibility that another studio might end up working on it. The LB! trailer that key just released could be White Fox's work. They did make that OP for key's Rewrite. White Fox has done a really good job with the Steins;Gate anime so I would be okay with them doing LB! if it's true. P.A. Works, unlikely. They've never made anything that runs longer than one season except Hanasaku Iroha, and that was their 10th anniversary project. LB! needs at least 2 seasons back-to-back. So yeah, my guess is White Fox. I still want it to be KyoAni though.

Anyway, are you going to read the LB! visual novel first then? I actually wanted to start reading it when the English patch came out a few months ago but now I think I should save that for later, after I've seen the anime.

Speaking of visual novel anime, I'm excited about Robotics;Notes too.

Tanzaku Mar 31, 2012 11:34 PM
Little Busters! anime is officially confirmed! I should be extremely happy about it... but if it's not KyoAni then I'll be a little disappointed. I want the director of AIR, Kanon (2006), Clannad/After Story to do LB! too.

Tanzaku Feb 27, 2012 1:57 AM
I watched the new FMA movie. To be honest, I had low expectation of it because I thought it was going to be like Conqueror of Shamballa. But it turned out to be quite interesting. Things will always be better than what you expect when you weren't expecting much. So yeah, I really enjoyed Milos. You know, I do hope to see Arakawa-sensei write an original story for a FMA movie one day.

Ah, Guilty Crown. I've been meaning to watch it for some time now. Definitely been hearing good things about it. Already downloaded the first 11 episodes. I just need to find time to start watching them. Same for Mirai Nikki.

I can handle gory stuff (in anime at least) rather well I guess. It was pretty extreme in Claymore and Elfen Lied but I can say that I wouldn't have liked those series as much if they didn't have all the violence and blood. Some anime just need them. The death scenes in Another are gory too. They remind me of the deaths in the Final Destination movies. Another has better story no doubt. At this point it's one of my favorite anime for Winter 2011/2012.

Tanzaku Jan 25, 2012 6:19 AM
Thanks! I celebrated my birthday by reading the latest Haruhi novels (fan translated) lol. I enjoyed them quite a bit. Can't wait for the next book to come out.

I'm watching more new anime this season compared to the last one. I've more free time now. My top pick is Nisemonogatari too. From what I've seen of Pirates and Another, it feels like they need more time/episodes before they get truly interesting (I have faith they will). I noticed you've already started watching AnoNatsu. I was comparing the anime with AnoHana at first (since both shows have the same director and character designer) but now I just enjoy it for what it is. I'm also watching Aquarion EVOL and Lagrange. Both are not bad.

As for the other anime, Danshi Koukousei no Nichijou took me by surprise for not being just an average high school comedy, despite having such a generic title. I like it more than I initially thought I would. Same goes for Kill Me Baby. Don't let that title fool you. I've only seen a little bit of it and I find it to be very cute and funny.

Lastly, about Symphogear. More specifically the 2 main girls in Symphogear. On one hand we have Tsubasa - has long hair, uses a sword and voiced by Nana Mizuki, who also sings the OP. On the other hand, we have Hibiki - has short hair, fights against enemies of unknown origin without knowing the whole truth, and voiced by Aoi Yuuki. Is it me or does the anime try to be "Nanoha x Madoka"? :P

Tanzaku Dec 6, 2011 12:37 AM
Sad to say, I haven't watched any of the new anime this season besides Fate/Zero and Last Exile. Been busy. I also blame my ISP for throttling my internet speed :( I'm going to try to finish off the spring and summer anime I picked up in the next couple of weeks, and then move on to this season's other new shows - Persona 4, Working!!, and Horizon. Do you know if Un-Go is good?