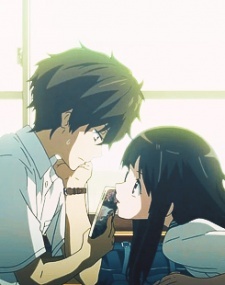 JulianneinJapan Feb 21, 2014 9:15 AM
Duuuude! How did you make such a cool banner for your MAL listings? The Hyouka one? Do you know HTML?

HatandClogs Jun 19, 2013 6:55 AM
The first moe guys show from long before Free was ever conceived.

HatandClogs Feb 14, 2013 8:47 PM
Yep, I actually backed it with at the $5 tier so I'm pretty excited. Yuasa is one of my favorite directors, especially for The Tatami Galaxy.

Learning names is actually a lot of fun and adds a new perspective to watching anime. Studios is the first step to this (and my favorite to talk about) but you seem to know most of them, or at least the big ones like Bones or KyoAni. A good place to go from there is to look at some of your favorite shows and see who the director was and what other works he's done.

For instance, since you appear to have enjoyed both AnoHana and Toradora, you might look into watching Ano Natsu de Matteru, which is the newest show from Nagai Tatsuyuki and features the same kind of drama, with lots of "yay friendship" followed by people bottling up emotions and eventually breaking down and yelling at each other. Another example would be your love of Ouran, so it might not be a bad idea to check out Igurashi Takuya's other shows, which would be Soul Eater and Star Driver. It might seem a little daunting but it's pretty fun and adds some interesting new ways to look at shows.

HatandClogs Feb 13, 2013 2:56 PM
Kick-Heart eh? You haven't seen any Yuasa shows and the only thing it looks like you're planning to watch from him is Tatami, so is there any particular reason you're going to watch it? Did you back it or what?

/me is shameless Yuasa fan and just wants to promote how great his not-Mind Game works are.

HatandClogs Dec 8, 2012 7:49 AM
I once quoted the line about "Energy in Adversity" to my mom and she lol'd about the same thing. Also, because I'm a dork my favorite flavor of tea is chamomile BUT I SWEAR I JUST LIKE THE TASTE

It's such a good show though, I'm always glad to see people checking it out.

Plus is very similar as far as the atmosphere and drama of Slope Kids goes. It's that super heavy feeling and Yoko Kanno music, though instead of kids growing up it's about adults coming to terms with regrets. Pretty much all of Shinichiro Watanabe's stuf is fantastic though.

HatandClogs Nov 29, 2012 9:00 PM
Yeah, pretty much every Macross is worth seeing except for 7 (because I haven't seen it so I can't confirm/deny, though it is about a space band fighting vampires with the power of rock and roll pacifism, so it has to be worth something) and Zero (which is really awful but if you end up a franchise fan you'll probably end up seeing anyways, plus it makes some stuff in Frontier hilarious. Remember the movie they filmed? That was an adaptation of Macross Zero. The especially hilarious part? The girl Ranka plays is Sheryl's grandma). DYRL and Plus are both excellent places to start, if you're curious; DYRL is pretty much the purest form of Macross and Plus is a lot like Kids on the Slope, actualy. Be sure to tell me what you think of them!

Well, Sakurasou sounds like it should be pretty much fine then. Since it's two cours and Winter looks to be pretty barren aside from Chihayafuru 2 and KyoAni's new show that looks fantastic, it should be easy to fit in after I wrap up Mushishi.

I'm actually in the same boat as you about Lucky Star, but I think the Nichijou artwork will grow on you once you see the actual show, I think it's quite charming and it's especially good looking in the ridiculous scenes where KyoAni is just showing off how much money and talent they have. I understand not being interested in a show because of the art, though. I think it's kind of silly when people say it's shallow to place a large amount of importance in a show's visuals, when there's not really much of a reason to watch anime if the art isn't important, imo.

Uh, the compilation movies have a couple of nice things. They're a bit tighter than the show, for obvious reason, and the massive budget means it pushes spectacle to the highest degree. I also generally liked all three of the main characters more in this version, especially Sheryl who is all kind of manly awesome. The first movie follows the TV events pretty closely but the second one will be veeeeeeery surprising if you've seen the TV. Alternate retelling might be a better name for what they are. The only problem is really that you'll miss out on a lot of some really great references to other Macross shows, but that'll just give you an excellent reason to rewatch it, right?

The main offensive thing in Sakurasou I was hesitant about is that the girl is his "pet", but if you didn't even think of that it probably won't be an issue.

And Nichijou is fantastic! It is one of my two favorite comedies along with Ouran, you should definitely watch it. It works the KyoAni magic in the best of ways, especially in the second half.

Hope you enjoy Macross Frontier, fantastic show. Be sure to check out the compilation movies afterwards, which I think top even the TV show.

Also, is Sakurasou as offensive as it looks? I'm a little interested in seeing what JC Staff gave all their budget to instead of Little Busters, but it looks like it might be terrible, so I've been holding off on touching it.

Yup! When Hourarou is dealing with the club's very first customer, I think. I had to have it. xD
All Comments