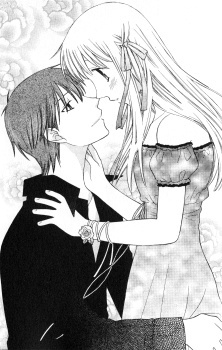 plagalcadence Jun 26, 2019 5:53 AM
Hello there! It has been forever since I've logged in here, and even longer since we've talked and I don't mean to be creepy, but it made me happy to see that you are still reading Amatsuki after all this time!!! :) I hope you enjoy it to the conclusion!

CAA_help_please Aug 5, 2018 11:18 PM
Thank you for adding me! Sorry I am posting here, I can't send messages until I have been a member for 3 days. Although I have a feeling I won't be able to comment here either

I put the whole message on my bio, you can read it from there! I hope this goes through...

This is gonna sound like a very strange message, but you're the only person I can contact that is a current member of CAA haha. I wanted to register as a member, but the CAPTCHA system on the registration is broken so it's impossible to sign up. I can't contact anybody on CAA because ironically I have to be a member to talk to people. Luckily, I saw you and your myanimelist banner in a thread and thought maybe I could ask for your help! Could you contact the admin or whoever runs the site to update their CAPTCHA? I'd really appreciate that.

I used to browse CAA when I was in middle school a long time ago and I had wanted to see if anybody I knew from those days were still there! I don't remember my old account or password, so that's why I'm trying to make a new account. Thanks for your help! And I'll delete this message when you've read it, I don't wanna ruin your page sorry!

GeneD Jan 14, 2017 2:50 AM
Yes please send me the link. I think I'll try signing up for the bingo one, but if I'm not keen on the result I'll probably just do an unofficial one too. Good idea about putting it in the blog here, I wouldn't have thought of that, but it'd be nice to have a "public" record of it outside just my personal computer. XD

Haha, yeah I know you love Amatsuki. :) I've been reading since last year actually but very slowly with long gaps. But it's always been on my radar because of the art since from way back to my wallpaper-making days and I've seen the hack-job that was the anime (there's seriously no ending, it just stops). I've been trying to give it more attention though, otherwise it might get burried beneath things I read faster/more ravenously.

I saw you put 14-sai no Koi on your to-read list, just wanted to give you a heads up about a (mostly very light) student/teacher relationship involving some secondary characters, there's about a 10 year or more gap I think so it's a bit "Mmmm..." But it's pretty light I think, but then again I have a pretty high tolerance for... basically almost everyting if I like the series enough (^_^;) XP

GeneD Jan 8, 2017 3:09 AM
Hi! Very belated merry Christmas and happy New Year, and congrats on completing the 2016 reading & watching challenges. The one for this year seems a bit complicated but I'll be checking it out in more detail sometime, was wondering if you're gonna do it this year too.

plagalcadence May 31, 2016 3:48 PM
I was definitely jumping for joy, haha. I'm just so glad they decided to keep going from where sanada left off translating...Amatsuki is a particularly difficult series to translate with all the cultural and historical background and five gazillion plotlines haha, but I am sooooo excited for what is coming...I've been buying the Japanese tankoubon for the past little bit to keep up with the series and the material coming up in the near-ish future is A+++ 10/10 made-me-scream type of plot twists...definitely some of the best material of the entire series. :)

plagalcadence May 27, 2016 1:27 PM
The Amatsuki scanlations finally caught up with and passed where the translator who was posting scripts on LJ left off!! Yipee!! New material!

GeneD Jan 23, 2016 9:19 AM
Yes that's the arc. Kazuma is <3 Also Hiyori is freaking great. Everyone in that thing is great, how it makes you care about the characters is amazing. Despite the anime only stuff in s1, I think I prefer the anime a teeny tiny bit more than the manga, maybe because it's just so well animated. Oh and the OPs for both seasons skyrocketed to the top of my list of fav OPs so, that's definitely a factor too.

GeneD Jan 21, 2016 8:55 AM
Hi. I'll totally answer your question eventually but it's probably gonna take me some time to process stuff and put it all down. :) I can say now that it was at the end of the Bishamon arc.

In the mean time, 1) you should watch the anime XD and 2) are you doing the manga reading challenge this year? I'm thinking of signing up, but probably only for the easy level.

GeneD Oct 25, 2015 1:25 AM
On my gosh, I'm so sorry to hear about the fire! O_O I hope you and your loved ones are alright and get whatever you need to get replaced quickly. Wish there was something more I could do, but at least I can send lots of internet hugs. ^_^

Despite the hype, I'd actually recommend reading the One Punch-Man manga first, but that might take a while since it was only licensed recently. Although if you read fan translations, it'll go quick cause the chapters are short. Otherwise, watch 2 or 3 episodes when you are able and you can always put it on hold if you want.