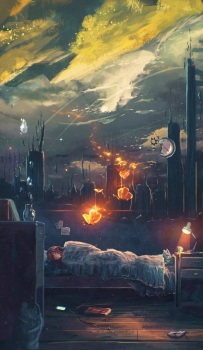 That's understandable. It can be hard since you can easily get distracted which isn't good. I fell victim to it at the start so I got a bit behind in school but I realized it and found some kind of way for me to be able to focus on work (school)! And like home offices, the thing I'd guess works the best is sitting in a room where you can't get distracted. That's what worked for me at least.

:D
Yeah, my german friend has told me that it has been somewhat messy with school lockdowns and stuff. And yeah! That's what I like the best. After last summer I was done with high school and started at the gymnasium (which I'd guess is swedish college or university) so I was around half a year with my new class and at my new school and I don't like it. Not only that I didn't know anyone, also the fact that the students are really annoying and just toxic and stuff. To be honest I can almost say I hate it but it is what it is. I'll manage :)

Oh yeah! I heard from people that I should skip the first 2 eps but I'm the kind of person that will watch all of a series even if some episodes are just filler/specials or like whatever these were. I watched them and as of writing this I'm currently on episode 4! I enjoyed the first 2 episodes since they made a reference to Ashita no Joe (here I go again talking about my fav anime) in the very first episode so that made me really happy since I got the reference! :)
But the comedy is enjoyable, not all jokes land for me but I'm only 4 eps in so when I get to know the characters more I'm pretty sure I'll grow to love it! :D

Hmmm... Yeah seems reasonable (if that's the right word :P). And yeah, I'd say Ippo is more focused on boxing as a sport and Joe more of a boxer who boxed I'd say... hopefully that makes sense :)
I've put it on hold so I'll pick it up again someday and most likely enjoy it.
And I highly recommend that you watch Ashita no Joe someday. Animation and audio might throw you off but you'll grow to somewhat like it. If you decide to watch it and feel like dropping it I'd say watch until at least episode 14 since that's a good time to drop it if you dont like it. But otherwise it's a great show and very emotion heavy. Especially Ashita no Joe 2! I've never rated a show a 10/10 (apart from monster) but AnJ2 was just a masterpiece.

I finished it! It was pretty good. I enjoyed it. The only thing I wasn't a big fan of was Turtle. His voice was kinda annoying but that's it. :)
And I see! Do you know why? Is it something like that it ''helps you escape'' or something? (just realized that that sounds very like... personal ig? So sorry if it offends you in any way) To me I just like older shows and shows that takes place in other times just because I love history.

Very nice! I'll most likely check it out someday.
Ah, I see. Good that you're enjoying it so far at least!
So you quit university... do you regret it? Or are you enjoying working more? :)
And yeah, I'm scared of adulthood. It isn't far away and everything feels as if it is going too fast ;-;
Fighting games can be tough to learn. All are different so you need to train like an actual sport to get better at them and learn stuff about them. And cool! Never really seen/played tekken but very nice hehe :D

Oki doki, thx you too. You can take your time to respond, no need to hurry :)

They closed the schools around Christmas for the first time since this whole thing started. So currently I'm doing online school which is working fine since I'm used to only being inside in front of a computer.

Makes me glad to hear! I'm planning on picking up Gintama when I finish Rainbow. And yeah all I know is that they made an Ashita no Joe reference which is my fav anime so that makes me glad. Makes me excited to watch it! Thank you.

Ah very nice to hear that you like it. I'm almost the complete opposite. I find it very repetitive and I'm not that big of a fan of the electric guitar/bass OST (If they're the right instruments?). Some characters I do enjoy and like but a lot I don't really like :/
Might be because after having finished Ashita no Joe in my mind I'm comparing Hajime no Ippo to it. I'll pick up HnI again someday since I never drop series' (ignore my 8 dropped) hehe.

Ooo very nice! I've watched a few eps and I'm enjoying it quite a bit. (Here I go again) Since it reminds me a lot of the first half of Ashita no Joe. Maybe too much since I feel as if some things are references to Ashita no Joe. Like how there's boxing, Joe and a big nice man who acts almost exactly like one of the chars from ashita no joe. But that aside, I'm really liking the series. I'm a sucker for animes that take place before 1990 so the it taking place in the 50's makes it even better. The only thing I don't like is how often they say ''bro''. But that's just a small nit pic. Excited to watch more.

Well tbh, not as great. Or at least that's what I thought at first. The first 13 eps were pretty meh but holy fucking shit episode 14 and 15 were gruesome. It came out of nowhere. First time anime gore has actually made me sick! I actually had to pause and take a break because those 2 episodes were really fucking disturbing (to me at least). But apart from that, the series doesn't really hold up against the original in my opinion. The main thing I like is that there's better animation (not as in art style but movement etc.). But they change stuff here and there that's different from the original one which makes it still fun to watch.

No worries! :D
Ah yeah that game, very nice! It's the lawyer anime game right?
And never heard of that game but it looks cool :)
I see I see :D
Yep I do. I used to play a lot more but haven't really had too much time lately so I've only been playing a few. When I play with friends I play a trash game called Heroes & Generals but apart from that I play a lot of Street Fighter III:3rd strike and Super Street Fighter 2 Turbo! :D

Jesus this message got very long, probably the longest MAL comment I've ever made. Sorry for the long read!

Are you working from distance or maybe it's work that you can't do from distance? What do you work as? (no need to answer if you don't wanna tell/too personal)

How's Gintama and Hajime no Ippo?

Gaming? Very nice! What do you play?

And basically same with me tbh but school instead of work. (:

Nice to hear that.
Gintoki gonna make Jokes about these Doujinshis. At least for this Yaoi things. You will get to that point :D
And yes, well for Gintama is this mix.
You get close to these Characters in the normal arcs. But also plot relevant arcs.
Anyway then you see them suffereing. And they can go on. They wanna live their normal life.
Sooo the feelings and emotions are more impactful than at other series.
Espcially when you get to know the Characters. And how deep the Story is. With every hidden meaning or hint to the Story ;)

No Problem.
I am doing that to like everyone who is starting Gintama.
So yeah.
And when you hear people who will write you after catching up.
For me such messages are damn awesome. I love them They make sooo happy. really really happy.

"hey, i'm that guy that you commented on before, I finally caught up to Gintama, stopped at Porori-hen. Thank you for introducing Gintama to me, the 2015 was my first 10/10 rating I gave out and tbh, if you hadn't given me that extra push I probably wouldn't have finished Gintama, so thank you for motivating me and introducing to such a masterpiece of an anime."