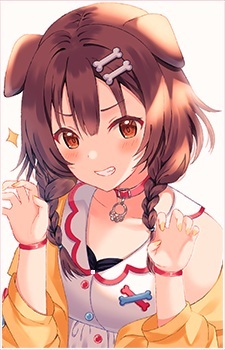 pchi Jul 4, 5:19 AM
yay we can celebrate graduating together ~
jk (kinda-- I mean we can) but I think it's okay to do things at your own pace :<
maybe you need other games to play in between the updates!! if you don't already
i'm really picky with games and get bored of them easily/quickly so i know it's hard u_u

hey! ^^
sorry for the intrusion , feel free to ignore this message if you're not
interested in a genshin discord server (another , i know xD)
we are managing a genshin oriented discord server where people who
love genshin can hangout , make friends and participate in other activities as well ~~~ (game nights , movie nights , music jams etc)
our player distribution between regions so far is 44 - N/A , 31 - EU and 45 Asia.
we are still fairly new and in to our fifth day ^^ so we are still figuring some stuff out 😊 but the members are very friendly and the community is very close knit and accepting! we try our hardest to make the newest members feel welcome 😃 let me know if you're interested in joining! ^^

we are also now affiliates with the genshin impact on MAL :D
https://myanimelist.net/clubs.php?cid=81849

Rythme Jun 13, 9:08 AM
I'm the opposite actually (both in how I've been watching streams instead of clips, and also in how our pandemic has just started and it's pretty much out of control rn lol). I still watch clips every now and them, but only very short ones like those from Sushi. I've pretty much been mainly watching 1 or 2 streams daily depending on how many of my oshi's go live each day (I'm watching Aqua's 歌枠 right now as I'm typing, and the setlist is full of my favourite songs!!).
I'll watch it if I have time I promise.
By the way, have you heard? Our Onion's dream's come true!

How do you look for meanings of words with kanji? I imagine it'd be next to impossible O__O
Well, beginner's level Japanese is full of words related to workplace, and I doubt there are many VNs about workplace out there, so I'm not surprised, haha.
It is a lot of fun! But it's only fun at school though. My class has turned online because of the pandemic again and it's soooo slow and boring... Being in a creator circle sounds like a lot of fun. I wish I could participate in one too ._______.

Oh...
I kind of wanna play more mobage but I probably won't be playing anything on my phone until I get a new one. I don't think my phone can take it anymore... Why play on global if I can play on JP server *smug face*.
D4DJ does have a lot of things going on on the screen. I can now imagine your phone exploding when if it runs Project Sekai.
Oh yeah! I played the collab event on JP server and deleted the game after it ended. I pretty much spammed NEXT COLOR PLANET and #あくあ色ぱれっと during that time.
I haven't played Bandori in ages. I heard the server crashed because people logged in when RAS came, haha.

Yoimiya!!!!! I'm so looking forward to her. She's already my second-best waifu (second to Barbara, of course) at first sight! Not to mention she's also gonna have a Kansai accent~. I can already imagine myself whaling on both her and her bow (I hope she's a 5☆ though. If she's 4☆, I'll be very disappointed...)
That's good news. If Ayaka is gonna be in the regular banner, I might be able to skip her. Having a third 5☆ cryo might be a bit too much... But Hayamin though ;-;
Give me your luck. The banner gave me two 5☆ weapons, and none of them were her sword... ;___;
Tbh I don't recommend having Zhongli in your team. Not because he isn't good, but because his shield is so OP and unbreakable that it'll make combat braindead.

You'll probably be ultra fluent at Japanese by the time the PC version comes out (if it ever does), considering how Type-Moon takes their time doing their stuff...

Rythme Feb 27, 1:00 AM
I think can only go a little above the 50% pity ._______. I have the same issue. I got the worst 5★ polearm in the game.
I'm a bit hesitant about Fu Tao though 'cause I'm waiting for Hayamin's Inuzama Cryo waifu (although I don't need her since I already have this Cryo nuclear warhead).