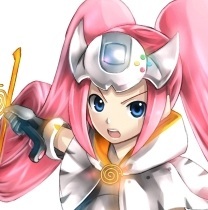 AND KLONOA! wow i remember that game, Need to get it again!

ukonkivi Jun 25, 2009 5:17 PM
Yay, my first meaningful friend request in a while.:D
Oh, I haven't been playing too many video games lately, sadly.

Last game I played was LaTale and I think I got almost to level 34 on my character yesterday. Something like 74% experience.

Before that, I finished by second playthrough on Tales of the Abyss.
So if I get started back up anytime soon, I'll be on my third playthrough.

Hoping to get my hands on a copy of Tales of Symphonia REAL soon. Especially for Presea.

Before that I was playing Disgaea 2 until a friend of mine borrowed if from me. Oh, and Touhou games, that strangely I haven't played in two weeks.

I've played some of the GBA games. Two of them, Empire of Dreams and Dream Champ tournament. But I didn't finish them.:< I need to go back and play them again sometime.

Well I don't agree with the review that it was too easy. It was just as tough as Klonoa 2. Even harder there at the end. However, it was just as short as the previous Klonoa game, if not shorter. But it was just a remake.

By hard at the end by the way, I mean the INSANE timing you had to have for one puzzle in Twilight Kingdom. You had to hit three little air crystals, in which there wasn't much over ten seconds for you to hit the big foe down that the bottom to get it still, quickly jump up and grab a foe, fling it at a crystal, go back down and hit the big bunny thing again just to make sure you don't get hurt, grab the OTHER one on the left hand corner of the screen. Jump back up on him and quick fling it at the second crystal(trickiest part, timing wise), and the grab the respawned small bunny again and fling it at the third before it resent.

NOT easy. I easy spent over third minutes of my life on that puzzle getting the timing right. If not an hour and a half or so.

Anyway, it was fun. I'm glad they made a remake of the first one. I went crazy enough trying to get my hands on a copy of Klonoa 2. And this was relatively painless. It was a pretty spectacle, though perhaps not as good as Klonoa 2. It's good to know the background information, however. And be able to have the bonus of changing costumes and stuff.

Hope they make another! Anyway, what was your thoughts on the game?