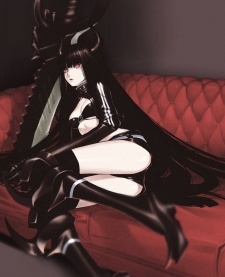 bv3484iu Dec 14, 2013 3:24 AM
Ib club's questionaire for individual member cards with colourful roses is added in Club's present actions
Share your opinion in comment board on main page of the club.

101gill Nov 16, 2013 5:26 PM
Thanks, your Black★Gold Saw icon is cool too :), I remember playing the Black★Rock Shooter game quite a while ago and thought it was fun is the anime any good?

bv3484iu Oct 1, 2013 11:28 AM
A discusion about making an interview with Kouri just has begun in the comment board of Ib fan club (http://myanimelist.net/clubs.php?cid=32593). Also, I'm looking for someone who is good at translating from English to Japanese to make all clear. Every member can freely discuss but propose only one question. If you fancy joining, add your statement.

Well, thinking isn't bad every now and then, right?

Hmm.. Horror, cute and singing, that is an interesting combination. I doubt you'll find anything that includes all three. Horror is generally a genre which I don't see very often in anime. This one is coming out tomorrow though: http://myanimelist.net/anime/15037/Corpse_Party:_Tortured_Souls_-_Bougyakusareta_Tamashii_no_Jukyou

I'm not really so sure when it comes to my favourite animation studio either. I'd probably say my number one is J.C. Staff, just because of the sheer amount of stuff they've done that I love (Henneko, Sakurasou, Railgun, Toradora) or like (Hidan no Aria, Yumekui Merry, Zero no Tsukaima). After that, I don't think I'm able to rank anything, but my other favourites include Production IG, Madhouse and KyoAni. Dogakobo can be pretty good too. A few (relatively) new ones which seem promising are White Fox (Hataraku Maou-sama, Steins;Gate), P.A. Works (Angel Beats, Another) and David Production (Inu x Boku SS, Choujigen Game: Neptune The Animation).

I don't really watch long anime either. The longest I've watched in terms of episodes is at the moment Toaru Kagaku no Railgun with 39 (48 after this season is over) and then K-On with 38 + a movie. After that there are quite a few with around 28 or 29 (Haruhi franchise, The World God Only Knows (which will be at around 40 after this season ends) and OreImo). I have watched a few episodes of Naruto and One Piece when I was a kid, but I clearly remember that I always liked Pokemon, Detective Conan and Yu-Gi-Oh much more. Bleach never aired here in Austria. (Well, maybe it did but I never saw an episode of it). This is the only one out of the big three I might try out (Mainly because the art style seems bearable and I love Opening 1 and 13). Naruto just seems like too much shounen for me. I wouldn't touch One Piece with a ten foot pole, because of art style and fanbase. I will start watching Detective Conan from the beginning (can't say when, but I will) and maybe watch the Pokemon movies since I really loved 3 and 5 (I think we even used to have a really old DVD of 3 at home, don't know what happened to it). I don't know if I start Yu-Gi-Oh, could be though since I collected the cards for quite a while.

I usually tend to stay away from shows with terrible art (see One Piece). I also used to not watch anything that aired before 2005. That changed (Don't get me wrong, I still haven't, but I plan to, the first ones probably being NGE, Cowboy Bebop and Outlaw Star). Normally I decide which shows to watch because of their character designs (It sounds stupid I know, but when I really like the character designs, I can get over some of the more boring parts, whereas I can't when I don't). The first anime I really wanted to watch because I read the plot was Danganronpa. That doesn't mean that I don't really care much about the story, it is one of the most important parts for me too, it just means that I don't choose what to watch because of it. I'm not really sure when it comes to music. Really good openings and endings are a massive plus point for me, but for the background music, I'm fine with anything as long as it doesn't distract. I think I'm saying this too often, but again, don't get me wrong, I do appreciate a good soundtrack when I get the chance to. Also, I prefer one single piece being absolute outstanding over the whole soundtrack being good, but with nothing that really grasps my attention. Two examples of that (the one piece being really outstanding) are Henneko (http://www.youtube.com/watch?v=eszCDn6ZD0Q) and Date A Live (http://www.youtube.com/watch?v=odN9HJilBJ4 That's an off-vocal rearrangement of the opening. Two of these rearrangements where used in episode 9 and 12).
I really love piano music by the way ;)

Not being from America, I haven't heard of a lot of the cartoons you listed, I watched most of Avatar: The Last Airbender (Not so sure about a few of the last episodes, I always loved Toph though). I still occasionally watch a Spongebob episode. The older ones were really good, but as with most things, they are slowly running out of ideas. Oh, and I'm a big fan of Donald Duck. More of the books than of the cartoons. I also rather liked Danny Phantom. Other than that, there isn't really anything that peaked my interest. I've never been a fan of the typical American cartoon humor that you find in, for example The Simpsons.
I'm not really a fan of American TV shows either. I did enjoy The Big Band Theory though, because of its scientifical authenticity and the humor going along with it.
(I also feel like I'm using the word "though" too often, but it's such a nice word ^^)

By the way, tell me if my English is understandable enough since I tend to make very long sentences (In a German exam we once had, my first sentence had 61 words.) I also tend to think too long about what to write and forget how I started the sentence, which is probably the reason if you come across very strange mistakes. I tend to mix up "know" and "now" as well when I'm not concentrated.

That's it for now (I'm concentrated), you have been warned about the length of my comments xD. I'll avoid asking further question and will let you answer to what I said, because the comments are only going to get longer if I ask more questions...