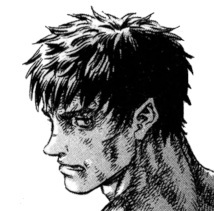 KaiserHamuel Sep 3, 1:29 AM
Fair enough. Looking forward to getting started and forging my own opinion adaption wise as well as for the rest of the manga. I’ve been putting it off for a while but it’s about time I got started.

CrimsonCW Sep 2, 6:08 PM
Still really nice! You have a way better deal over there it seems!

Hit the hay! No need to stay up!

CrimsonCW Sep 2, 5:48 PM
Damn, those are nice. I like that like the Japanese volumes the coloring of the cover comes on the spins. In the American Dark Horse releases, it's all that boring brown/black on the spines.

I think for yours they chose good substitute pictures for the extra volumes (obviously there aren't 80 volumes that Miura draw a cover for) so at least half of them use colored panels, which look okay, but it's pretty obvious (at least for me) to see an actual cover vs one of those substitutes.

CrimsonCW Sep 2, 5:35 PM
Are you Italian? Hmm, have you guys gotten those hard black books, with 3 volumes in one?

I don't think they're worth the extra cost to be honest, I just have the regular single books. 41 should come out.... eventually. That's the only one I don't have.

CrimsonCW Sep 2, 5:25 PM
You might as well at least read to the current one before it comes out, I say. There's no point in waiting now.

I used to feel the same way, to be honest. That I only 'saved' Berserk for those times I needed it, until this godawful year started and I soon found myself caught up, but for once, it was great to not have to dance around Youtube analysis videos or spoilers and I could read the new ones with everyone else.

In any case, I just have a feeling Miura not only planned for this but also had planned everything out. I say there's a strong chance his assistants can finish it with his script. And I hope that is the case.
But we'll find out with the release of the next chapter.

What are your thoughts about 364 coming out in just a few days now? Or have you heard about it?

KaiserHamuel Sep 1, 7:35 AM
I agree that they rushed over some stuff and the cg is annoying but I think the great atmosphere from the show was retained and the last one has a better ending than the show did in my opinion. I haven't got around to reading the manga yet so I can't comment adaption wise.

KaiserHamuel Sep 1, 7:16 AM
Damn really not a fan of those Berserk films I guess.

AntiBeyonder Aug 30, 7:49 PM
>Bold of you to assume that people care about having a discussion with an extremist. Never once I thought about you being a troll, and that's the problem. I was the troll since my first message that you took seriously and triggered you.

You are acting like we are on equal moral grounds. You are defending animal abuse, you are the extremist. I am defending innocent beings that have a will to live. It would be different if we needed them to survive, but we do not in this day and age.

>I would say that, hypothetically, if extraterrestrial had found our planet in the past, with the intention of a colonization, we would have extincted and we would not be here wasting our free time watching anime.
If, hypothetically, extraterrestrial finds our planet now, we need to prepare for the biggest world war, and we should also set international conflicts aside if we want to survive as a species. It doesn't matter if we like it or not.

No, the hypothetical is they've done exactly what we do to animals, but to us. So they're forcibly breeding us through rape, enslaving us, taking us away from our parents and then confine us in diseased and cramped cages, torture us and then kill us. You would not want this to happen, so why would you do this to anyone else? You have the choice to not do it. Think about it real hard.
The premise is you do not have to be the asshole man, you can pick love and peace and help the innocent beings without a voice.

>It just stirs up veganphobia as I said before.

If you're offended by words and not the actions of enslaving, torturing, raping, murdering innocent beings that have the will to live when we do not need to eat them to survive, there is something incredibly deranged in your mind.
I know no one likes being told they are wrong, but your actions are infinitely more worse than my annoying moral preaching.

CrimsonCW Aug 30, 5:45 PM
I'd say he was one of the best storytellers on top of the art. He was truly a master in every respect.

bioeffect Aug 30, 6:07 AM
I find the person you're arguing with amusing as she has Christopher Hitchens as her prof pic, a hypocritical humanitarian who was strongly against authoritarianism, corrupt and powerful governments, and yet openly supported the bullshit Iraq war because Saddam Hussein was an evil worth extinguish and killing and bombing innocent civilians would have been considered an unfortunate but necessary evil by him. Yet here she is lecturing you about how slaughtering even a single animal is a horrible crime, truly amusing indeed. Can't stand people like her you should block her for your mental health's sake.

AntiBeyonder Aug 30, 2:39 AM
You were the aggressive asshole from the beginning, attacking my personal life that you knew nothing about.
I'm willing to talk to anyone, but you never had any goals besides trolling then calling me the troll.

AntiBeyonder Aug 30, 2:32 AM
You are a lot like Jordan Peterson, that says a whole lot of nothing and dodges every argument while making a non sequitur.

I do not care what the world thinks of vegans, when the majority of the world is pretty ignorant and lacks moral compass.

The more extreme a vegan gets, the less animal abuse takes place, I hardly see that as a bad thing.

How could I ever become open minded to animal abuse? Would you ever become open minded to child rape? You do not realise what you are arguing. What am I not open to, I've answered everything that's come to me, what did you even want to talk about? All you did was complain about how extremist I am. No what is extreme, is the rape, enslavement and murder of billions of animals every year.

The one thing you still did not answer: "Hypothetically, if extraterrestrial found our primitive planet, and did what we did to animals to us, would you like it? No, then why do it others?"

I hope one day, you stop torturing animals as you would not wish it upon yourself.