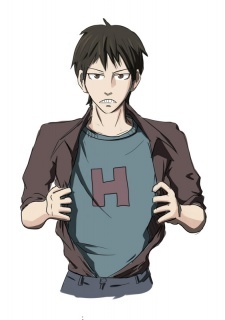 Nbod62 Apr 30, 2014 5:17 AM
oh,your friend found it confusing? then it is good that he stopped reading it because i have heatd that iif you are confused it becomes even more and more weird in the later volumes. and yeah you should pick up homunculus again!

Nbod62 Apr 29, 2014 9:39 AM
yeah,you should pick up homunculus again! it is so interesting and each chapter peels away like onion. so i put it on-hold because it was too good. you know,i don't like it when my favorite series ends too fast :D.so i will read some chapters of it time to time! and why did you only read the first volume? did you drop it or is it on-hold? and check my other recommendations too!

midnightblade Apr 27, 2014 1:21 PM
If you were at a convention and you had enough money to buy two complete series of anime, which two series would you buy (assuming that most anime series are available)?

MagnumMiracles May 23, 2013 8:48 AM
Oh, and one more thing, the writer of Monogatari also wrote a series called "Katanagatari" . The novels of Katana have not been translated, but the anime is really good :).

And you're very welcome.

Please enjoy. I read the novels myself, and Kizumonogatari is still my favorite one. It is AMAZING.

vansonbee Dec 6, 2012 11:06 AM
There is slight romance on side characters, that might not appear again, but Franken Fran is purely comedy.

Right, Amagami continuation isn't the same, its like one of them role playing dating games.

vansonbee Dec 4, 2012 5:39 PM
Jigoku Shoujo s2 will be basically the same, but now more involved with the Enma staff.

G-Maru Edition is the newest Kawashita is writing at the moment, its pretty a cross between Doremon/Ichigo/Yuri series. Instead of a protagonist, you a heroine, who looks bit like Nishino, but acts like Junpei and is striving to be a manga artist.

Franken Fran is a funny manga, would of been a great anime adaptation, but you will find out why in chapter 1. (no romance)

Amagami SS is a nice anime, if you like harems and there is no NTR or picking a girl over the other. You get 6 heroines and each girl has 4 episodes each, sadly I only prefer 1/2 of them.

Notice that you started that new series, Joe Adventures. How is it?

gonna plan to watch "Momo e no Tegami" too.

Regarding chapter 167 discussion thread, you felt that Toujou was the final girl in the beginning, that is somewhat true. The author did not plan to go further than middle school, but somehow the series gotten so popular, that it evolve past her expectations.

Nishino seem so natural and real, that's what my friend told me, after he read it and I do agree.

Toujou and Manaka should be buddies, but they could not any longer, because it would interfere with his love life with Nishino.

I dunno if your into action type series, but Alive: Saishuu Shinkateki Shounen has a good story and the ending bit unexpected. There mostly action, friends and some romance. The author actually die a few months after completed this story and he went against fans pick for the final ending. :>

For anime, I really love Jigoku Shoujo series, there are 3 seasons total and each compress of 24 episodes at least. Each episode has a different story, but a recurring cast of the super natural. I like it more over Another btw.
All Comments