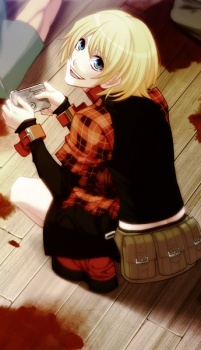 AncestralSpirit Jan 4, 2016 8:23 PM
No one is probably going to see this but i feel i have to post this to the main page of my wall, so here goes:
I just watched GYO: Tokyo Fish Attack, which is an adaptation of a manga i have yet to read. I could not rate this after watching it because i honestly wouldn't know how to.
The animation was brilliant, albeit incredibly creepy and gory, which is pretty spot on given the material it's based on.
The plot is flat out insane, i couldn't really tell you what the 'plot' is because the film does not seem to have a beginning, middle, or end really. Stuff just sorta happens. It's kinda like watching a disaster movie and you just watch a couple of people kinda walk through it, while the disaster itself doesn't really seem to have much of a direct effect on them. Don't get me wrong it effects them alright, just not directly.

I finished the film with far more questions than i did answers (please don't read on if you don't want spoilers), such as:
1. Why did the creatures sometimes simply decide not to attack our main protagonists?
2. What exactly was the gas? Was it sentient? Man made? Some alternate dimension god? Seriously the stuff can physically fucking grab people, and when you put it to flame it has faces, so what the fuck is it?!
3. Why place a Chekov's Gun (main character gets her ankle bitten by one of the machines, there by possibly being infected) and then not use the damn thing?
4. Why did the professor want to turn himself into a flying version of one of the monsters? Did he want to infect more people? Live a life as a free whatever the fuck these things were?
5. Why did some of the creatures pull more infected humans into them to create bigger more disgusting versions of themselves?

I probably have more questions but since i'm ill and tired anyway, and now that i have a headache from entirely different reason than my currently blocked sinuses, i think i'll stop typing soon.

one of my friends from uni might be starting soon, she's tall and crazy so you'll know who if she comes in

HOWS LIFE? YOU SHOULD COME TO MINE SOON

did you end up watching pacific rim? what did you think? absolute balls to the walls nuts, reminded me of anime with power levels, such a risky move for Del Toro but hopefully in the end it pays off. He clearly enjoyed it though, some of the composition and choreography was handled with perfection and the monster/mech designs were top-tier, just the characters that were a bit bland but i did like the major point of equality and having everyone banded together.

black guy as the leader? aussies as the cocky heroes? the american isn't a cunt? JAPANESE SUB-PILOT? Genius, just their writing was a bit overly cheesy.
All Comments