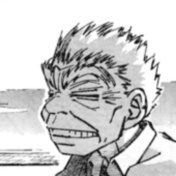 Sound-Of-Onions Feb 2, 2009 7:21 AM
Hey, just went to see your anime-planet profile(which is awesome by the way), and noticed that Afro Samurai was the one and only anime on your to never watch list. How can you judge an anime so harshly, by swearing to never ever watching it ? And by the way, that got me interested enough to watch it after Nodame Cantabile.

deguy Jan 11, 2009 11:03 PM
Hi there... Hope you had a good Holiday season. I trust you had a fun Christmas. Anyways, just thought I'd drop you a line and ask if you've been following "Gosenzosama Banbanzai" or is it something you watched ages ago?

Sound-Of-Onions Dec 12, 2008 5:35 PM
Sayonara Zetsubou Sensei was also a 4-koma manga to begin with, but it didn't have the same pace as Azumanga Daioh.

Sound-Of-Onions Dec 12, 2008 1:58 PM
I watched it in the original subbed version. I know that japanese female voices are higher than the standard, but when you hear 5 of them screaming into your ear for 20 minutes it gets really annoying. About the being hard stuff> Ojisans (like you) should be hard on everyone, or else they aren't real grandpas. And alot of slice of life animes aren't as slowly paced as AzumangaDaioh was. The pacing was bad, you gotta give me that at least. The jokes are a question of taste of course, but I found most of them to be without any form of originality and strangely for a Comedy they even seemed a bit forced, and endlessly repetive.

Sound-Of-Onions Dec 12, 2008 3:31 AM
Wow, that was a pretty damn cool message ojisan. I'm impressed, or rather intimidated to a point where I almost regret having typed these words, in fear of you quoting another part of the message, and lecturing me. So I'm gonna try to explain why Azumangah Daioh wasn't a memorable experience> First of all the voiceacting is extremely annoying, especially Tomos. I know she's meant to be annoying, but I personally thought that was too much. Most of the characters constantly seem to be screaming which is pretty damn tiring in the long run. I didn't think the jokes were that funny, and some of them were downright unorginal, and repetetive.
However some of the characters were quite original, such as Sakaki, Kimura or Osaka. I might not have liked it because I wasn't in the right mood for its rather slow pacing, but it did seem a bit too slow to me at times. You might say that it's an anime for relaxation, however that is not what I seek while watching anime.

Please don't be too hard on me Ojisan.

Sound-Of-Onions Dec 10, 2008 9:52 AM
Hoho, it's a old geezer ! And he's danish ! You wrote in your personal information that you're not easily impressed, yet you gave Azumanga Daioh a perfect 10 T_T. I completely fail to understand ! That anime wasn't that great. You'll have to tell me why, or else you will be cursed with the cat-curse, that Sakaki, also suffered from !

deguy Jun 6, 2008 11:20 PM
Wow. I really missed your birthday didn't I? My apologies and a Happy Belated Birthday to you. Hope it was a good one. ps: Didn't know you're almost 5 years younger than me.

Yuunagi May 21, 2008 2:26 AM
Have you ever read Mohiro Kitoh's Short Stories? I just stumbled across it again while going through an old stash of manga and some of the stories there were reminiscent of Yuki Urushibara's She Got Off the Bus at the Peninsula.

Yuunagi May 3, 2008 3:25 AM
Well, they could also apply Kohaku's philosophy to come up with other sure-sell descriptions.

Yuunagi May 2, 2008 2:46 AM
Hmm. ARIA's finally licensed. I wonder how they'll sell the series to English-speaking audiences.
All Comments