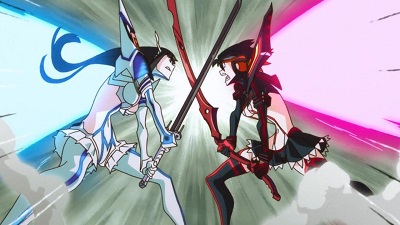 For a show as extreme as Kill La Kill, it should come as no surprise that the fanservice is no exception. With one of its major plot points revolving around the idea that the reason humans wear clothes is because of extraterrestrial lifeforms called “life fibers” evolving them in preparation to devour them in a giant “cocoon sphere”, characters wearing little to no clothing quickly becomes a trend for the students of Honnoji Academy and company when they start getting wise and prepare to fight back against the alien menace. And naturally, much of the main cast is hot enough to pull this off. 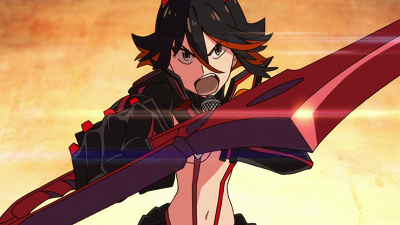 As magical girls go, their combat outfits usually have some level of fanservice worked in. When Ryuuko Matoi wears her kamui, Senketsu, in combat mode, she has to wear as little of him as possible, since there’s a high risk of being taken over by the life fibers of which he’s composed if she comes into too much skin contact with him, hence the need to wear basically nothing. A focal point in Ryuuko’s character development is when she overcomes her embarrassment in dressing like an exhibitionist in a fight, as her zany, comic relief bestie Mako Mankanshoku points out to her that she’s got the “slammin’ body” for it, and she should be proud of it. Once she gets over that, she’s able to “truly wear” Senketsu and use his power to her full potential, looking hot while doing it. 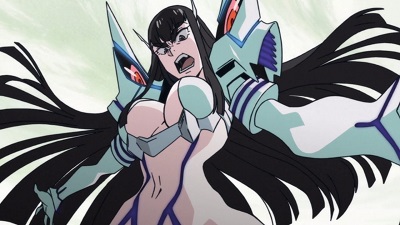 The first impression the viewer might get from Satsuki Kiriyuuin's introduction is that she's hot in that "powerhouse woman" kind of way. The show establishes that she and her mother, Ragyo, have this in common－at least on the surface. What remains consistent though is not only is she hot in her resolve, but also in that “I-don’t-care-who-sees-my-business” attitude. She berates Ryuuko for her embarrassment over wearing Senketsu, donning her own kamui, Junketsu (“purity”, oddly enough), proclaiming that the true way to wear a kamui is to wear it with confidence, and without shame for all the skin and curves that show. That, and the whole having to wear as little of it as possible in order to maintain control over its power bit. 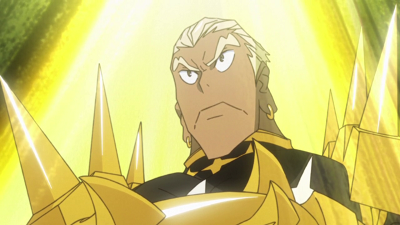 For the ladies who like a solidly built, militaristic man with a soft spot for lolita types like Mako Mankonshoku, Ira Gamagoori fits the bill. While not sexy in the devilish sense per se, he’s got the slicked-back blond hair and the built physique to make up for it. His "Shackle Regalia", three-star goku uniform—a uniform composed of 30% life fibers—does fall into the kinky category of sexy. Although this is mostly for comedic effect, the fact that the activation of his goku uniform has an S&M theme to it, it’s clear he would know how to use it—probably in either situation that would warrant it. 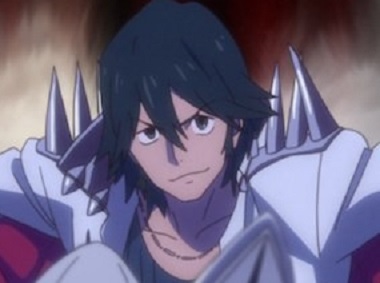 Stereotypical high school jock Uzu Sanageyama, the overseer of the athletic clubs on campus, fulfills this show's version of a bishonen. Though he’s certainly a jerk, he does garner some respect when he demonstrates his resolve to defeat Ryuuko Matoi in a fight after suffering defeat the first time he faces her. That kind of fearless effort to save face and regain honor, combined with that head of 80’s rocker hair and lean yet toned body that exudes a combination of strength and nonchalance, he carries a very delicious attractiveness indeed. 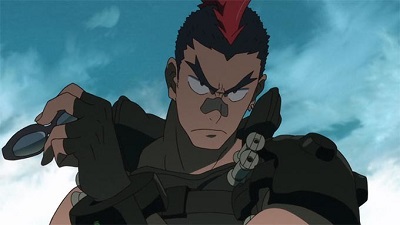 While we have girls wearing skimpy kamui and guys showing off muscle with their goku uniforms, we also have guys who feel no need to wear any clothes at all (save for what they have to in order to avoid awkward censorship—well, too much awkward censorship anyway). But they have the bodies for it, so it all works out. First in line to declare his aversion to clothing because of the life fibers and how research into kamui resulted in the death of his sister, is bad-boy Tsumugu Kinagase. The minute he’s able to, this member of the rebel organization “Nudist Beach” strips off what clothing he first appears in when he makes his entrance in the show, showing off his physique in full, in all his Mohawk glory. 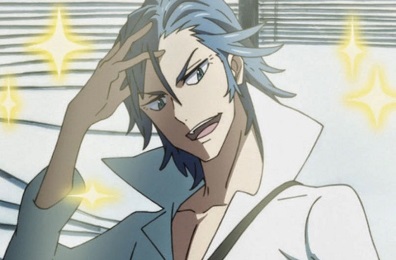 Remember that bit above about “awkward censorship”? Well, here’s where we see it. But Kill La Kill manages to give it some flair. In his initial appearance, seemingly unassuming homeroom teacher Aikurou Mikisugi passes as a bespectacled and rather reserved member of the school staff at Honnoji Academy. But, as a leader of Nudist Beach working as a spy within the school, he reveals his truly sexy side (particularly to an intensely blushing Ryuuko) by shoving back his wild hair, pulling off his glasses, and stripping down, with all the unmentionable bits covered with glorious purple sparkles. It doesn’t hurt either that usually when he strips, a hot club track plays in the background. Like Tsumugu, he has the physique for it too. In fact, he goes beyond that, with a lean yet toned body like Sanageyama’s, but certainly not afraid to flaunt it, even when Ryuuko more or less threatens his manhood with her scissor blade.

Indeed, even if blatant sexuality almost to the point of being exploitative isn’t everyone’s thing, there’s something about Kill La Kill’s hot characters that can be a major draw. Like Aikurou Mikisugi’s first strip session, it’s nothing short of hypnotic in some ways, jaw-dropping in others, to be sure. The storyline explodes into zaniness, naturally, but here, fan-service, extreme as it is, does what it’s supposed to do, and adds to the entertainment value rather than takes away from it. So long as the viewer’s willing to turn their brain off.