If you're a fan of Sawamura Eijun, I think this week's events on Diamond no Ace might just be a case of losing the battle but winning the war. We'll find out soon enough... 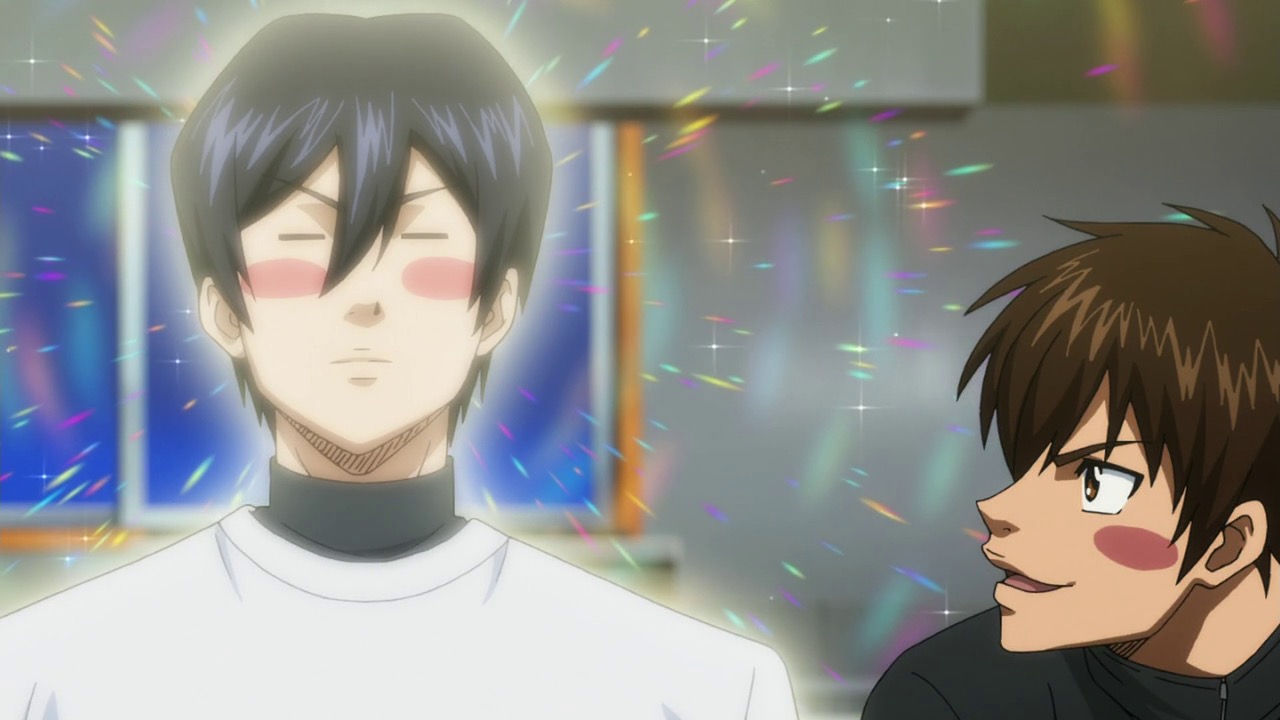 Well, it only took us till what, the 105-episode mark, but we finally saw a historical moment between nominally the two most important characters in Diamond no Ace (at least as far as the title goes, anyway). Important as that was, though, there was an awful lot of ground to cover before we got to that point. 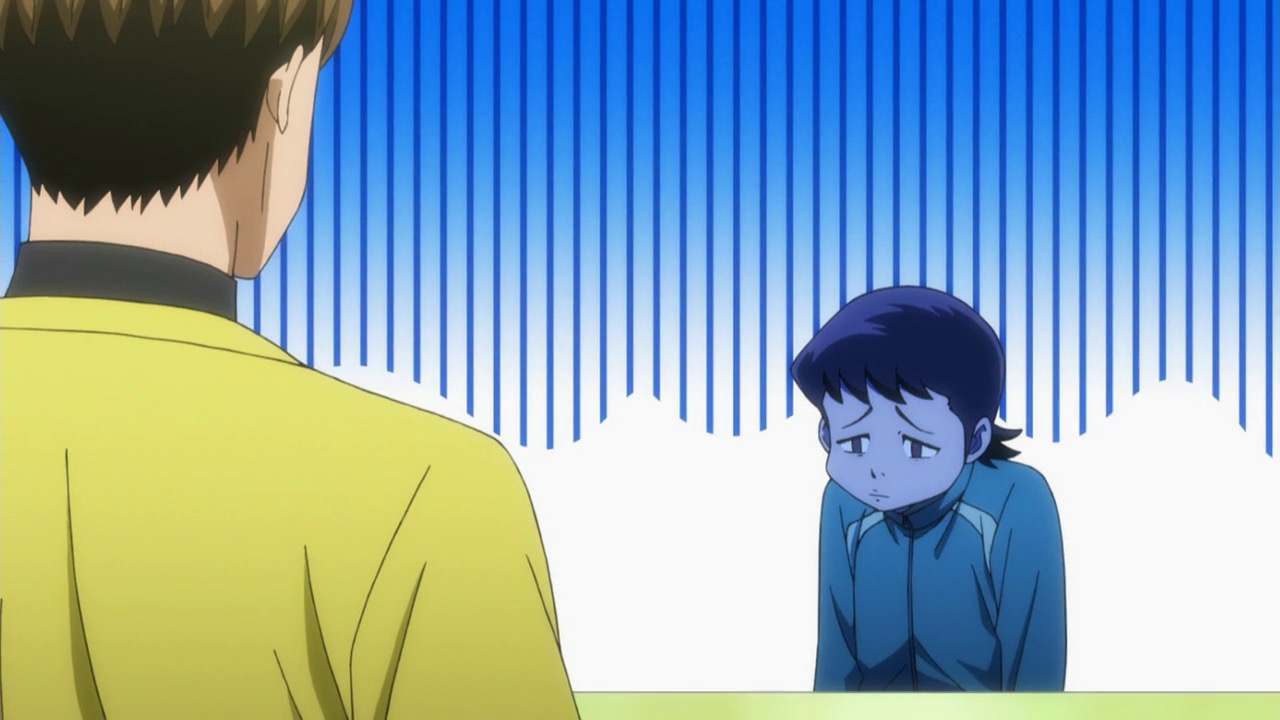 There are four teams in this Tokyo semifinal round (unsurprisingly) and Seiko (the ones to watch - get it?) are the only ones that haven't played an important role in the series before this arc began. As is its wont, Daiya no A spent most of an episode before a big game checking in with all the supporting cast on the opposing teams. 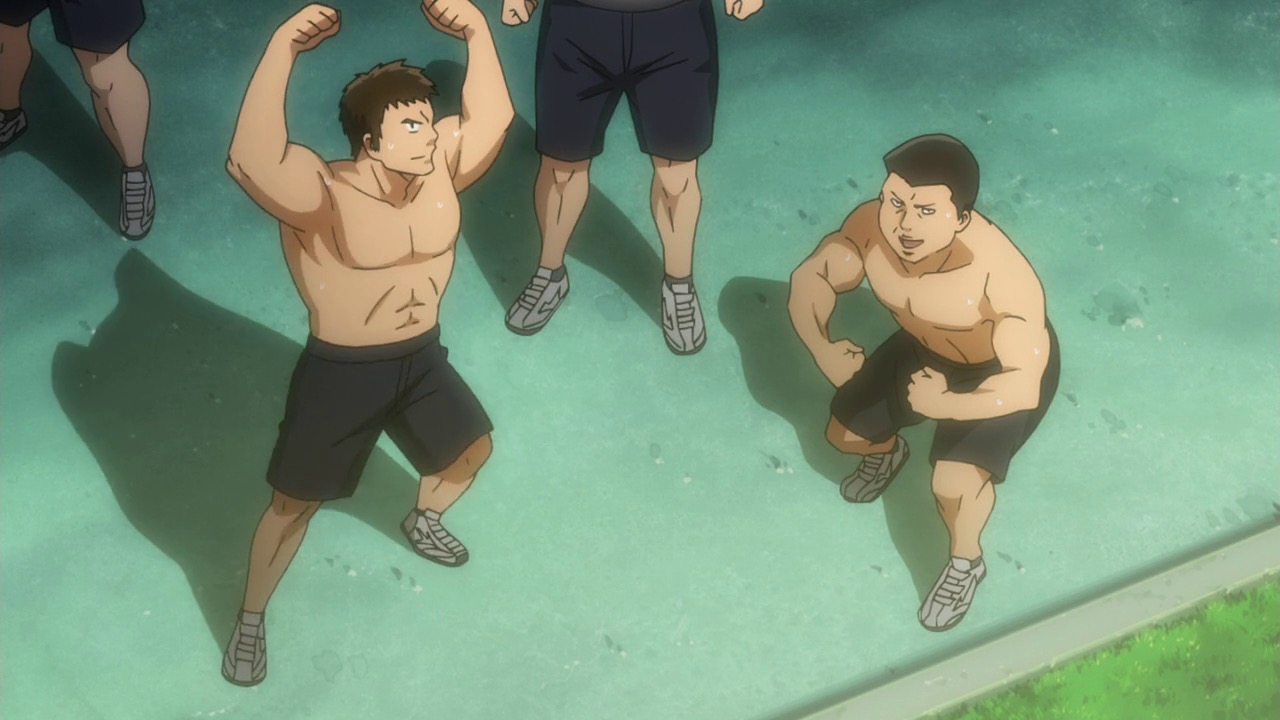 Yakushi is Yakushi - they don't seem to change much. I like this red, white, and blue ball drill they use - it suits their style. Ichidai is familiar from way back, too, but it's a relatively new face that seems to be at the center of their story now - a pitcher (the guy played by Kimura Ryouhei) who apparently left the team at some point, and blames himself for what happened to Manaka-kun the last time they played Yakushi. In fact, he blames Raichi too - and revenge against him seems to be his motivating factor. 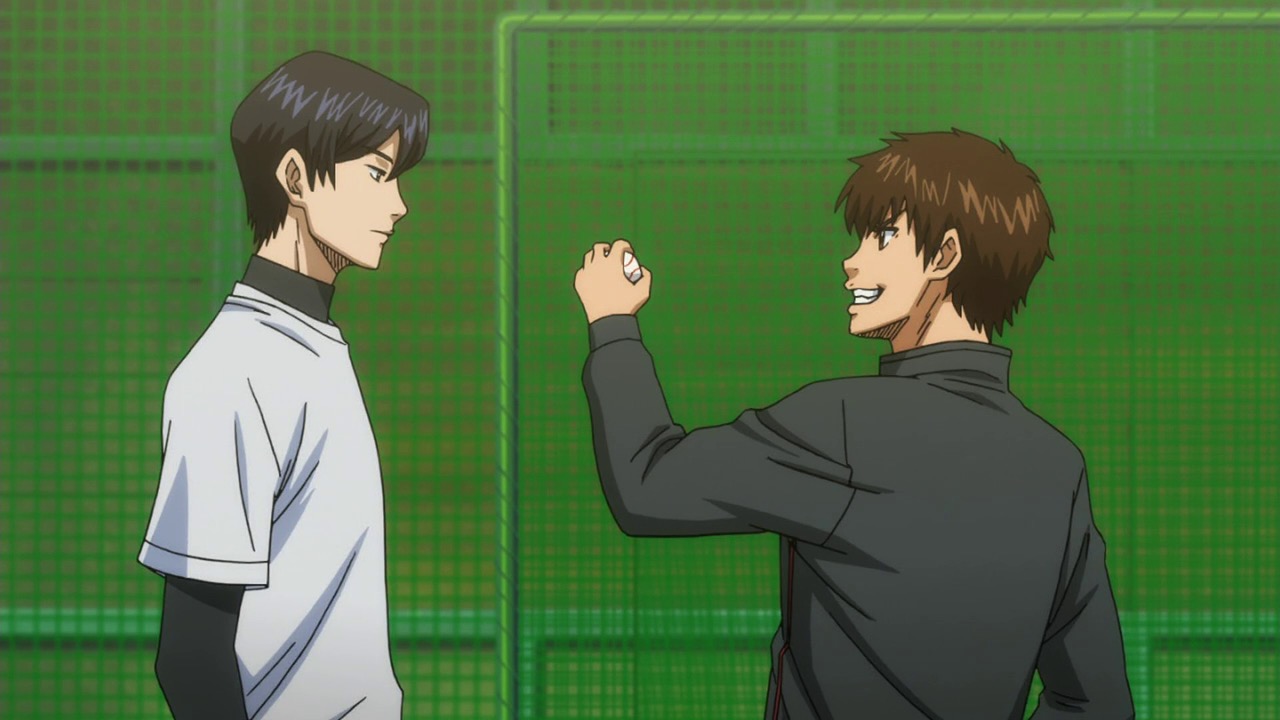 That should be an interesting game, but it's hard to believe Yakushi won't win - because it's hard to believe Seidou won't win, and Eijun vs. Raichi (Baka Bowl III) is the fated matchup everything is building towards. Especially since Nabe revealed to Eijun that his weakness is left-handed hitters - specifically the changeup to left-handed hitters. All the signs are pointing towards that showdown being the climactic moment in the finale. 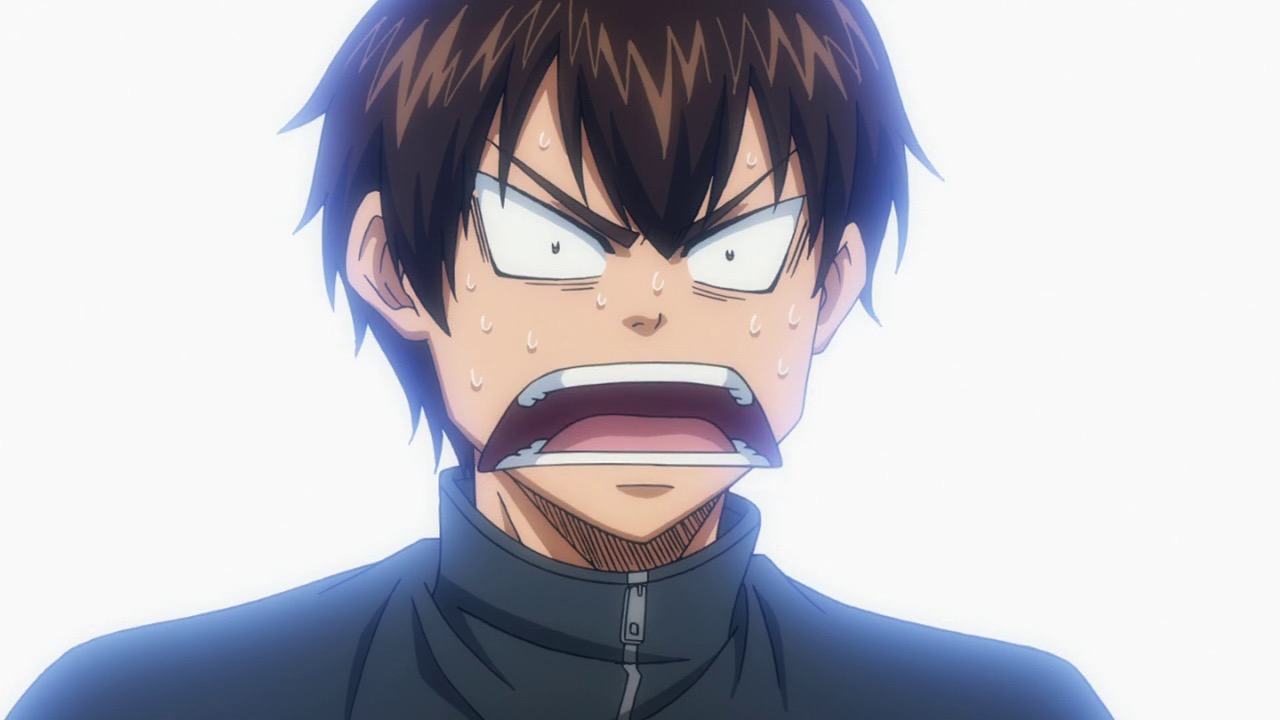 First, of course, Seidou has to get by Seiko. No question they're an imposing bunch (apart from the catcher voiced by Fukuyama Jun, which pretty much closes the Ace of Diamond loop on seiyuu way too old to play teenagers, and fills out the Shirokuma Cafe connection) but honestly, they don't impress me much - there's a reason most ballplayers don't look like bodybuilders or sumo wrestlers. For most guys, all that mass comes at the expense of flexibility - more muscle doesn't add up to more power or fastball velocity, it just gets in the way. They do have their own coach's redemption story, though their coach certainly crossed a line big-time - he kicked one of his players in the dugout (I'm guessing by accident during a fit of rage). They'll get their pub next time, but Seiko looks like a speed bump to me. 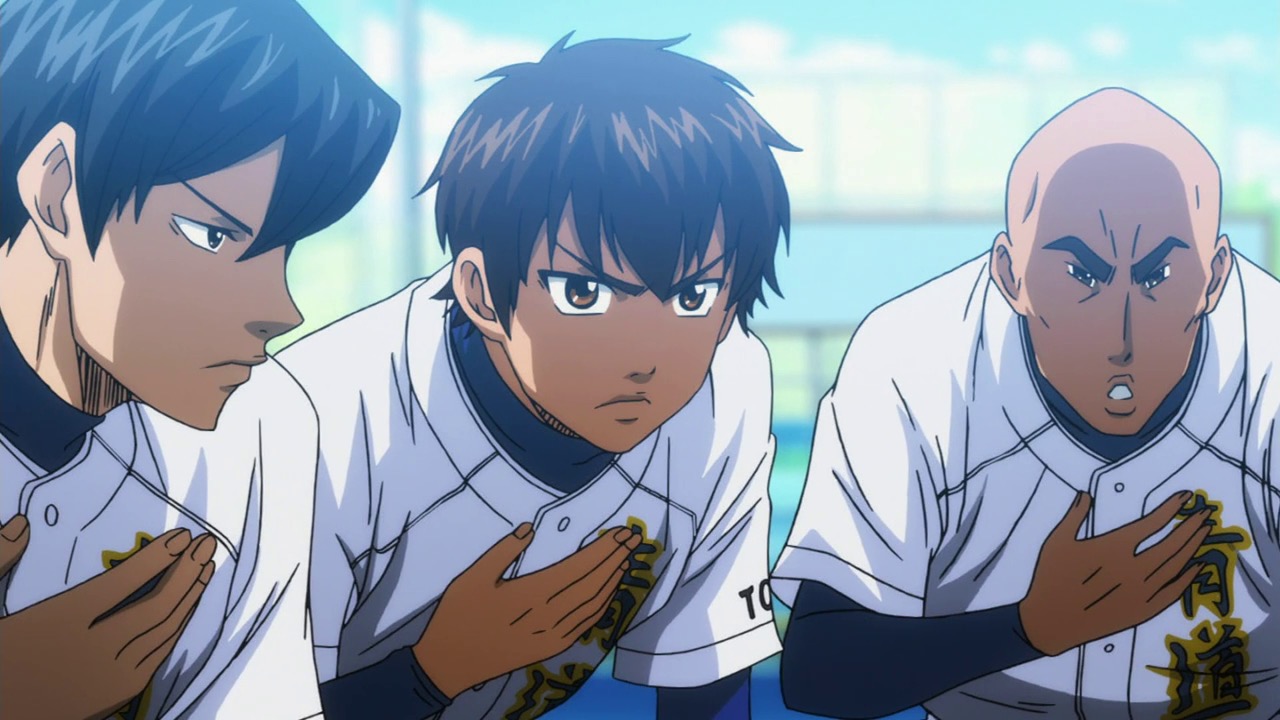 That's one reason why I wasn't too disappointed to hear that Furuya would be starting the semifinal game. Given that the final is the next day, it seems very unlikely to me that Kataoka would start either of his first-years back-to-back, so Furuya starting this game means Eijun will likely start the final (against Yakushi, of course). Nabe pointed out both boys' faults, but cut his criticism with considerable praise - which was really not the case with Kawakami. I don't think much of Nori (what an apt name for such a limp guy) as a pitcher, but this was really the first time I've felt sorry for him. It has to be tough, living with knowing just how much the underclassmen have eclipsed him by. 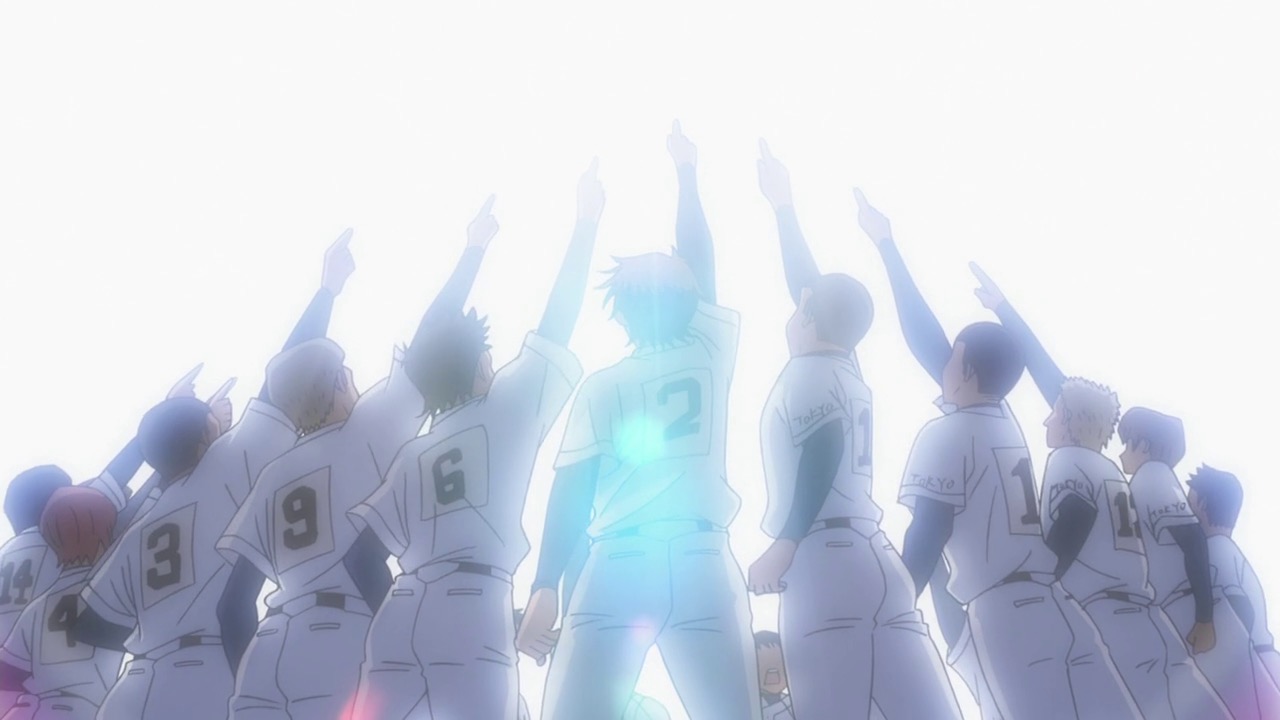 That historical moment, though, was the headline. Eijun and Furuya seem finally, on some level, to have bonded - for the first time since their initial nighttime meeting on the practice field. Each of them is learning a new pitch, and they have a common enemy - Miyuki (who knows, maybe that was his idea all along). Furuya even acknowledges Eijun in his way - he admits (to himself) that Eijun is "right behind him", and (to Eijun) that he's glad he came to Seidou. I think it's too late for Furuya's character to be totally rehabilitated, but I applaud a little humanization if that's what we really see happening - I think this rivalry would be a lot more engaging if there were a tiny hint of mutual respect at the heart of it.