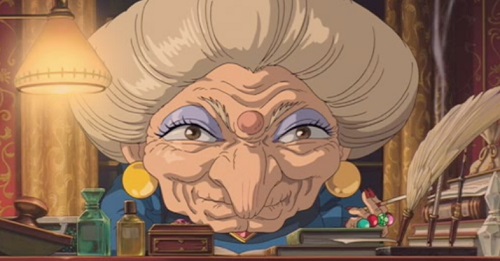 The movie Spirited Away, created by Japanese animation mastermind Hayao Miyazaki, is an incredibly touching story about a young girl, Chihiro, discovering herself in a beautifully constructed spirit world. One of the things that makes Miyazaki such a wonderful director is the fact that even his antagonists are multi-dimensional. There are no static characters in the worlds he creates. Villains are not evil merely for the sake of being evil and Yubaba the witch in Spirited Away is a prime example of this. The primary role of the witch is that of the antagonist. She has the ability to do magic (i.e. can turn into a bird, creates energy bursts, breathes fire, and steals names) and she usually uses her magic for personal gain. She does and says a number of terrible things that negatively impact those around her, but she also possesses several quite redeeming qualities as well. Here are four of the most prominent traits that demonstrate Yubaba the “bad” witch isn’t quite as bad as she seems. 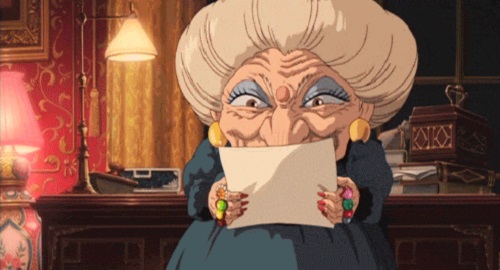 One of the first things learned about Yubaba before she is ever even on screen is that she runs the bathhouse in the spirit world. It’s also soon discovered that she has taken an oath to give a job to anyone who asks for one. Yubaba doesn’t always like charitable pledge, as is made obvious when she says, “I can’t believe I took that oath – to give a job to anyone who asks! I hate being so nice all the time.” Despite the fact that she doesn’t like the oath or want to give Chihiro a job, she keeps the promise she made. It may be something she does begrudgingly, but her actions here prove that she is a witch of her word. 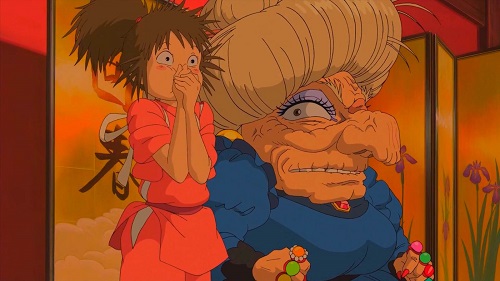 As already mentioned, Yubaba is in charge of the spirit world bathhouse. She takes her business very seriously, telling Chihiro that it is a “high-class place” she’s running – and she is incredibly good at it. The bathhouse is popular among spirits, so she’s definitely doing something right. Yubaba is also surprisingly cordial with her customers. While she may be a beast of a boss, her customer service skills never falter. This is seen well when she is interacting with the supposed “stink” spirit. She tells Chihiro to put her “hands down” and warns her not to insult their guest. Yubaba is ultimately the one to realize that the “stink” spirit isn’t a stink spirit at all, demonstrating that she is also very knowledgeable in her field. 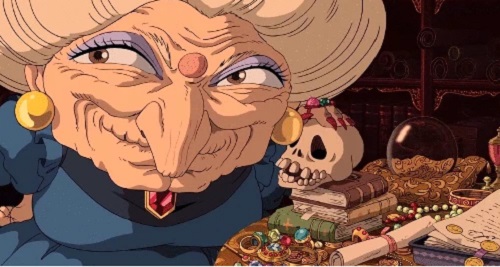 Despite Yubaba’s overbearing and condescending supervisory methods, she is actually a pretty decent leader. Her staff listens when she speaks and are quick to follow her directions. More than this, though, is the fact that those who work for Yubaba seem to gradually adopt her personality traits. For example, Yubaba establishes herself as a very greedy individual, as is demonstrated when she says, “What a pretty name…and it belongs to ME now.” Even the nicest employees at the bathhouse share this gluttonous characteristic, which they undoubtedly picked up from her. This has less to do with her trying to lead her team of bathhouse associates, however, and more to do with her staff naturally following her. Ironically, this is exactly how good leadership really works. 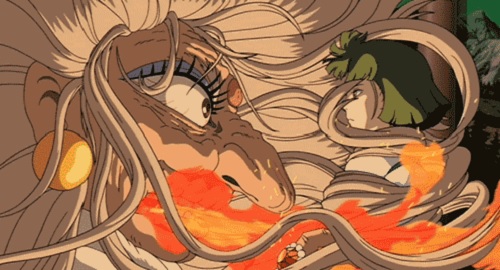 One of the most redeeming aspects of Yubaba’s personality is that she absolutely adores her baby boy, Boh. In fact, she is so upset by his disappearance that she literally spits fire from her mouth when screaming, “What did you do with my baby!?!?” Yubaba’s demeanor is completely altered when she interacts with Boh, her harsh tone melting into a gentle coo. Her baby boy seriously affects her, a fact that he uses to his advantage to save Chihiro in the end. The mean old witch nearly loses it when he threatens, “If you make Sen cry, I won’t like you anymore.” No matter how despicable Yubaba may be, there is no denying that she is an incredibly affectionate mother.

It is hard to agree with everything that Yubaba the witch says and does throughout the movie; she is, after all, the antagonist and there wouldn’t be much of a tale to tell without her doing the bad things she does. But, it’s also important to realize that she’s not all evil either. She definitely has good qualities and some of them make her a pretty respectable character.