The popular series Vampire Knight takes the romantic symbol of a rose a step further and gives us a visceral depiction of how treacherous romance can get, proving that a rose by any other name... would probably be a vampire! 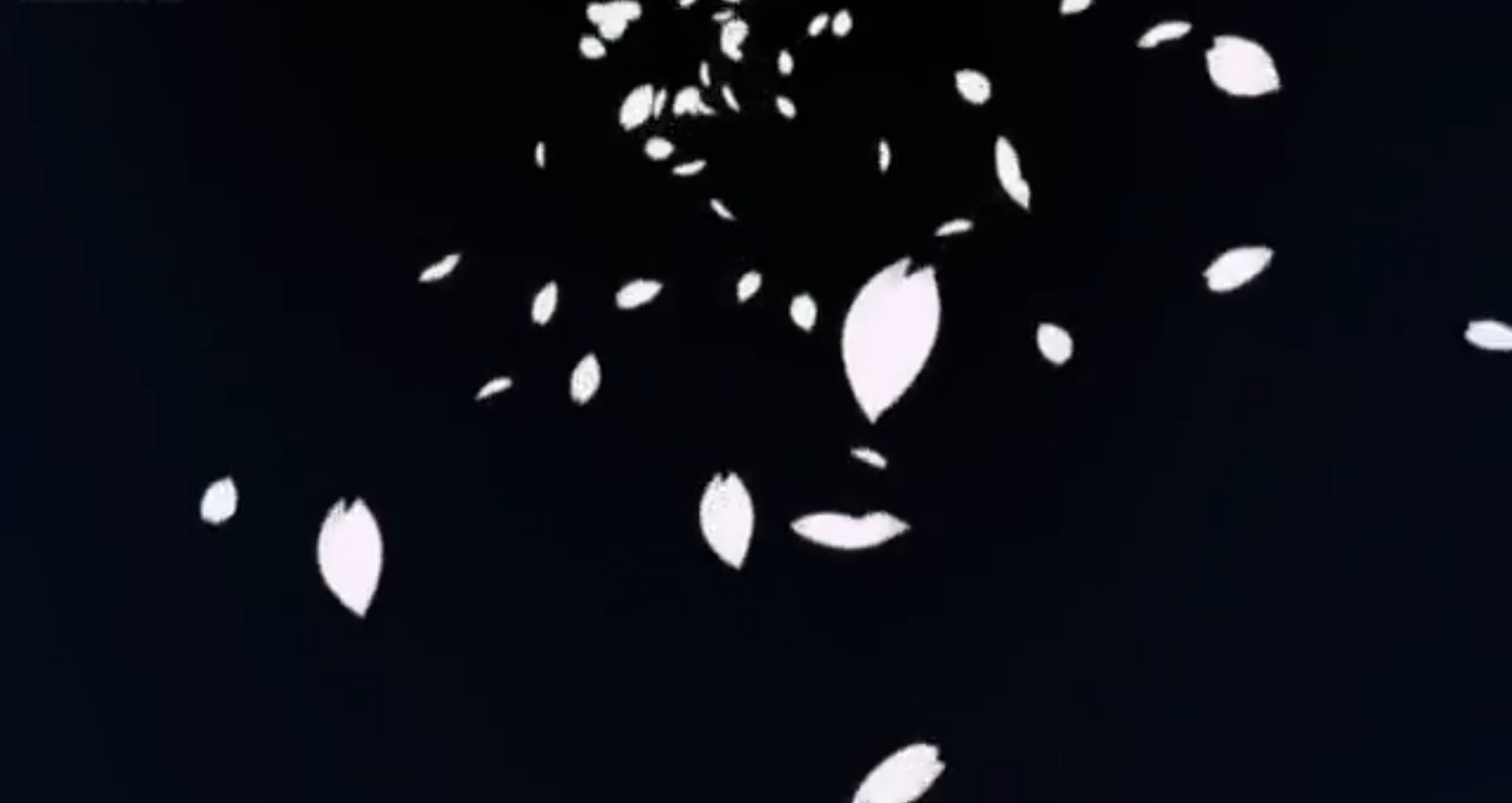 What do vampires have to do with roses? Well along with being a curiously reoccurring symbol throughout the series, the conclusion most of us might come up with is: "Vampires and roses are both deceptively beautiful and deliberately dangerous." That's true, of course. The modern depiction of a vampire is that of an alluring and hyper attractive individual that ignites the fires of passion within we puny mortals while also being a deadly hunter out for our blood. However, that conclusion really only scratches the surface of the question. It would be like asking for a drink by saying: "May I have some liquid please?" Sounds kind of silly now doesn't it? And nowhere is this more true than in the shojo anime series: Vampire Knight 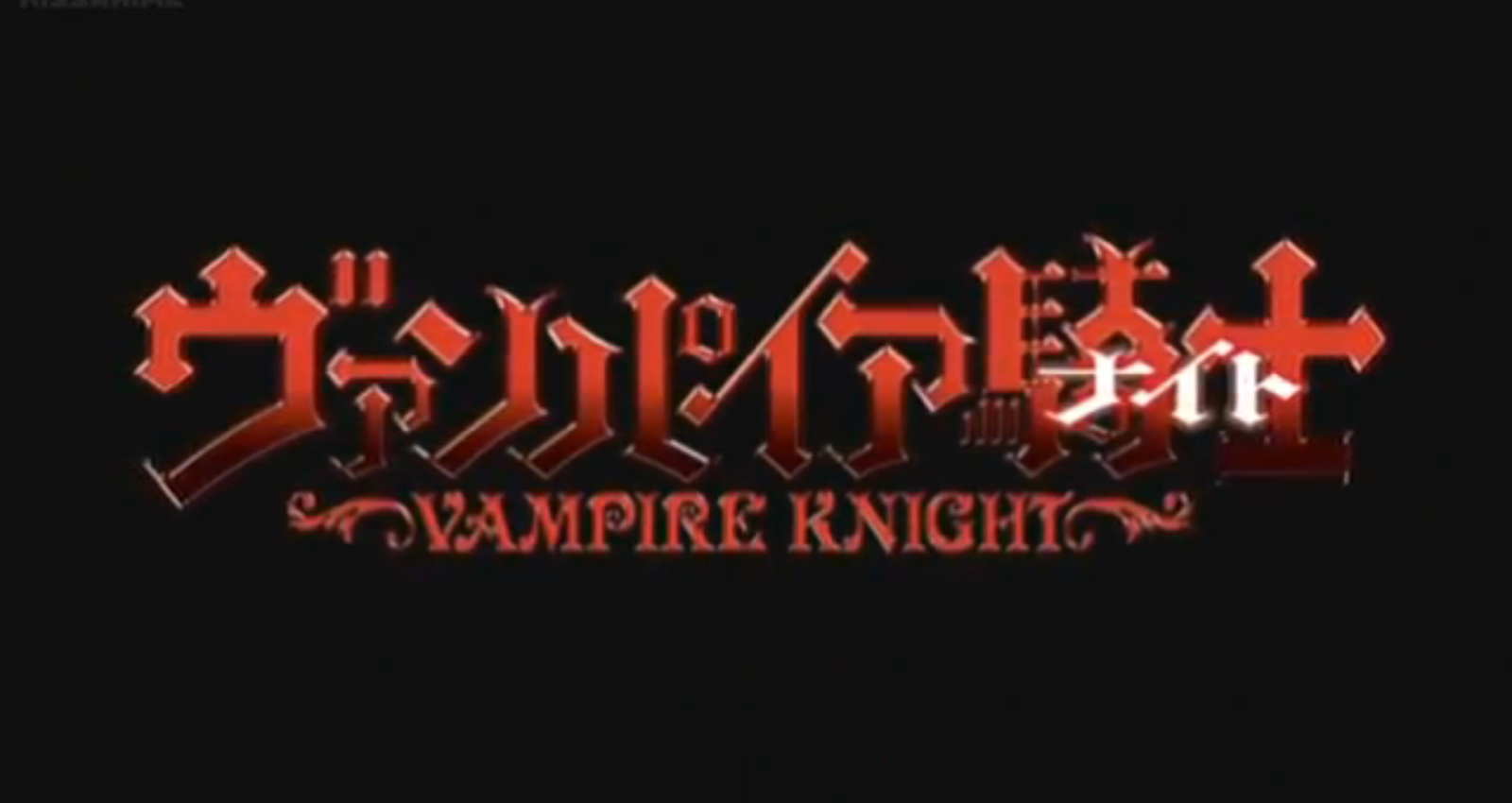 Vampire Knight follows the story of Yuki Cross as she, along with her brooding childhood friend Zero, lays down the law at the prestigious Cross Academy. That isn't all, though. This particular academy guards a very unique secret. That secret being that a good portion of its students are vampires. That's right. Vampires. Although vampires are pretty common, most of the human population aren't actually aware they really exist. It's Yuki's job to help keep the secret from being discovered. She and Zero must walk a fine line as they are torn between two worlds. The world of ordinary humans and the darker underworld of vampires. It's up to Yuki and Zero to keep the peace between a population of hunters and their prey. In other words, it's like having cats and mice go to the same school together and hoping nothing goes wrong. Needless to say her job can get a little dicey from time to time. All that aside, that leaves one big glaring question. If so few people realize vampires exist, then how did Yuki learn about them? That's a good question and the answer leads to my first major point.

When we're first dropped into the world of Vampire Knight, we're introduced to the greatest defining moment in Yuki's life. When Yuki was a young girl, she was attacked by a rogue vampire. Keep in mind this vampire isn't like the others we see later. There's no sense of intelligence or beauty here. This vampire is ugly, frightening, and monstrous. Kind of like Dracula without his Monday morning coffee. A complete mess. The real comparison Vampire Knight vampires have with roses is pretty much wrapped up in the back story of these monstrous type vampires. Here comes the important part, so pay attention.

Moments after we see the first vampire is when Kaname takes the stage. Kaname is also a vampire, but on the opposite end of the spectrum. He's smart, confident, and handsome. He steps in and kills the rogue vampire, saving Yuki's life. Don't blink. Kaname putting an end to that ugly old vampire is actually one of the most important images in the series. The moment he steps in, we're given a powerful visual on the duality of vampires. 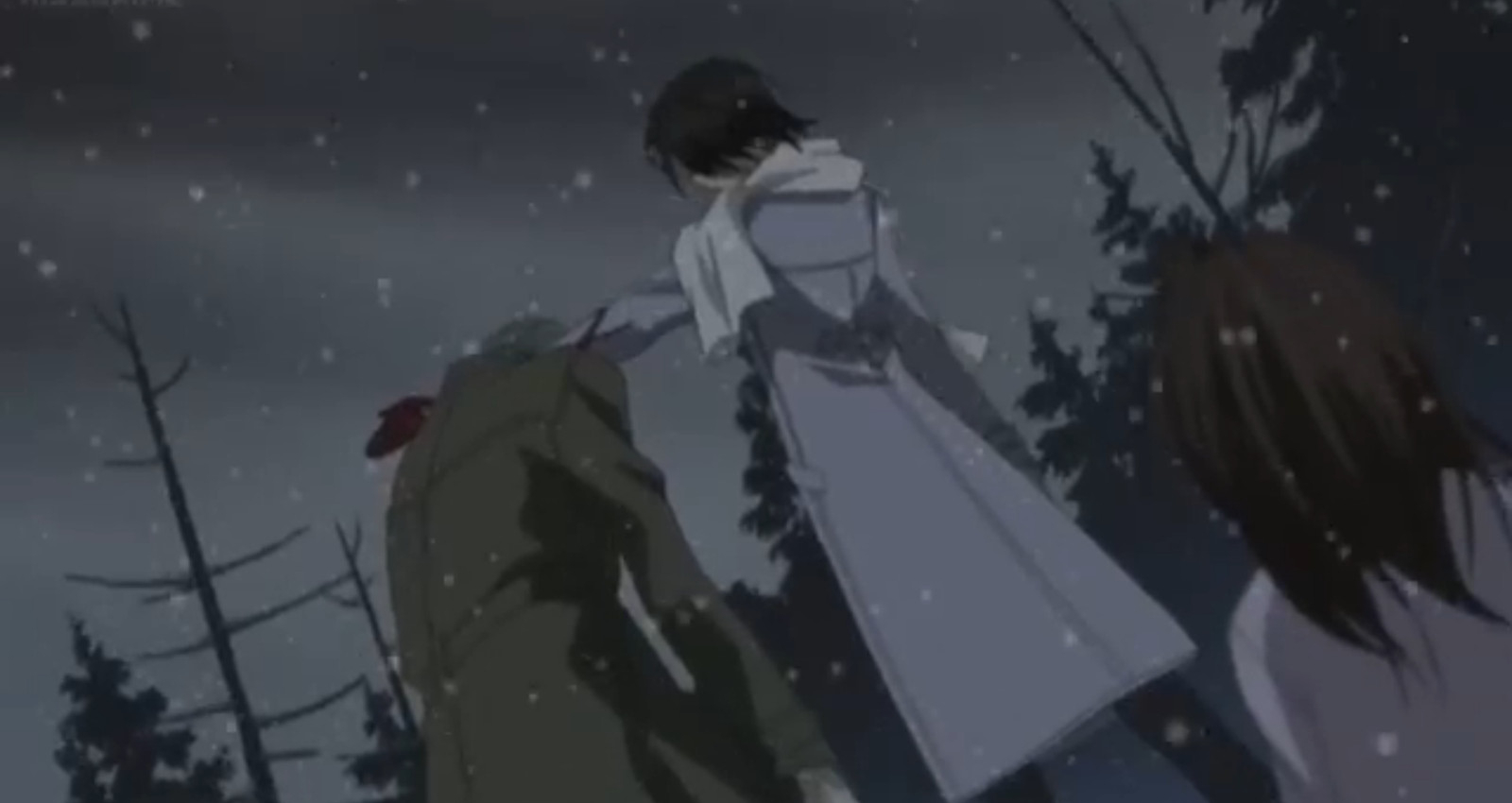 Most vampires in the series look and act like Kaname. They're cool and sophisticated. Throughout the series, these sophisticated vampires are not only shown hunting down the more monstrous vampires, it's implied that they enjoy doing it. Don't worry, I'm about to bring all these points together.

Sophisticated vampires like Kaname and his friends represent that first comparison to roses. They're beautiful and charming just like a rose should be. At the same time, however, we're never allowed to forget that a hungry beast always waits beneath the surface. No matter how polite they seem, that ever present sense of danger always lingers and any romantic pursuit will have an inevitable grim ending like eating taco bell after twelve.

Now let's take a closer look at the monstrous vampires. In the series, these are called Level E vampires. Never heard of the Vampire Knight letter classification? Don't worry. Here's a little rundown of the level system before we get a little too far.

The levels are really more like stages of deterioration. Along with Level E, you also have Levels C and D. The first and most common stage is Level D. Humans stamped with this level classification have been bitten by a pure blooded vampire and are in the process of turning, but haven't quite gone mad yet. Level Ds still have some sort of control over their own minds and live in a balance between human and vampire until they go insane. Level C is the level of hope. Unfortunately, most bitten humans never reach this stage. Level C vampires are bitten humans who have stabilized themselves by drinking the blood of the purblood vampire who turned them in the first place. You can see how that can be a problem. After all, not many pureblood goes around giving out free samples. Fortunately, as difficult as it might be, reaching Level C would save you from degenerating into a complete mindless beast, unless you get caught by reality TV. I don't think even a pure blooded vampire could save you from that. Finally we have Level Es. 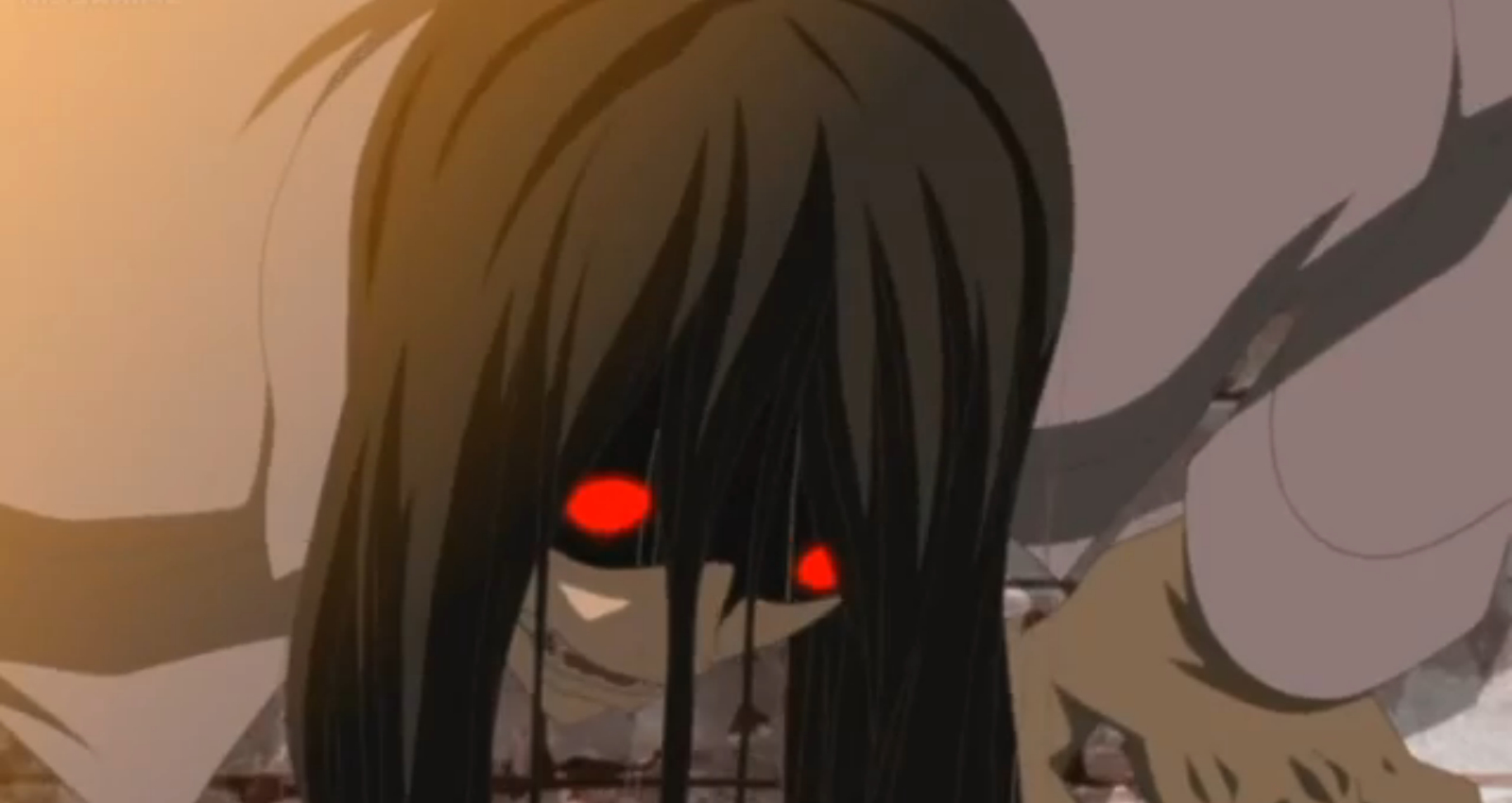 If you guessed the "E" in Level E stood for Edward, you'd only be half right. Level E refers to the final level or the end. These creatures already left humanity far behind and have pretty much devolved into mindless beasts. These "beasts" are humans who've been bitten and changed into vampires. Here's the big difference, though. Not just any vampire bite do the trick. According to the rules of Vampire Knight, only a pure blooded vampire can turn a human. Pure bloods are a rare and special breed. They're really powerful and so mind-blowingly awesome that even other vampires instantly respect them. In other words, only the most perfect of vampires can create the mindless creatures designated as Level E.

The rose makes many appearances in Vampire Knight. It's the symbol of the disciplinary committee that Yuki and Zero belong to. The "bloody rose" is the name of a powerful vampire hunting weapon. Not to mention the many other appearances the flower makes during the series. So how does all this fit together? Well the connection stems from the duality of vampires.

There is a scene that takes place in the first episode of the series where Kaname is given a rose by one of his many admirers. He takes the rose to be polite, but doesn't really want it. Kaname destroys the rose by draining the life from it. 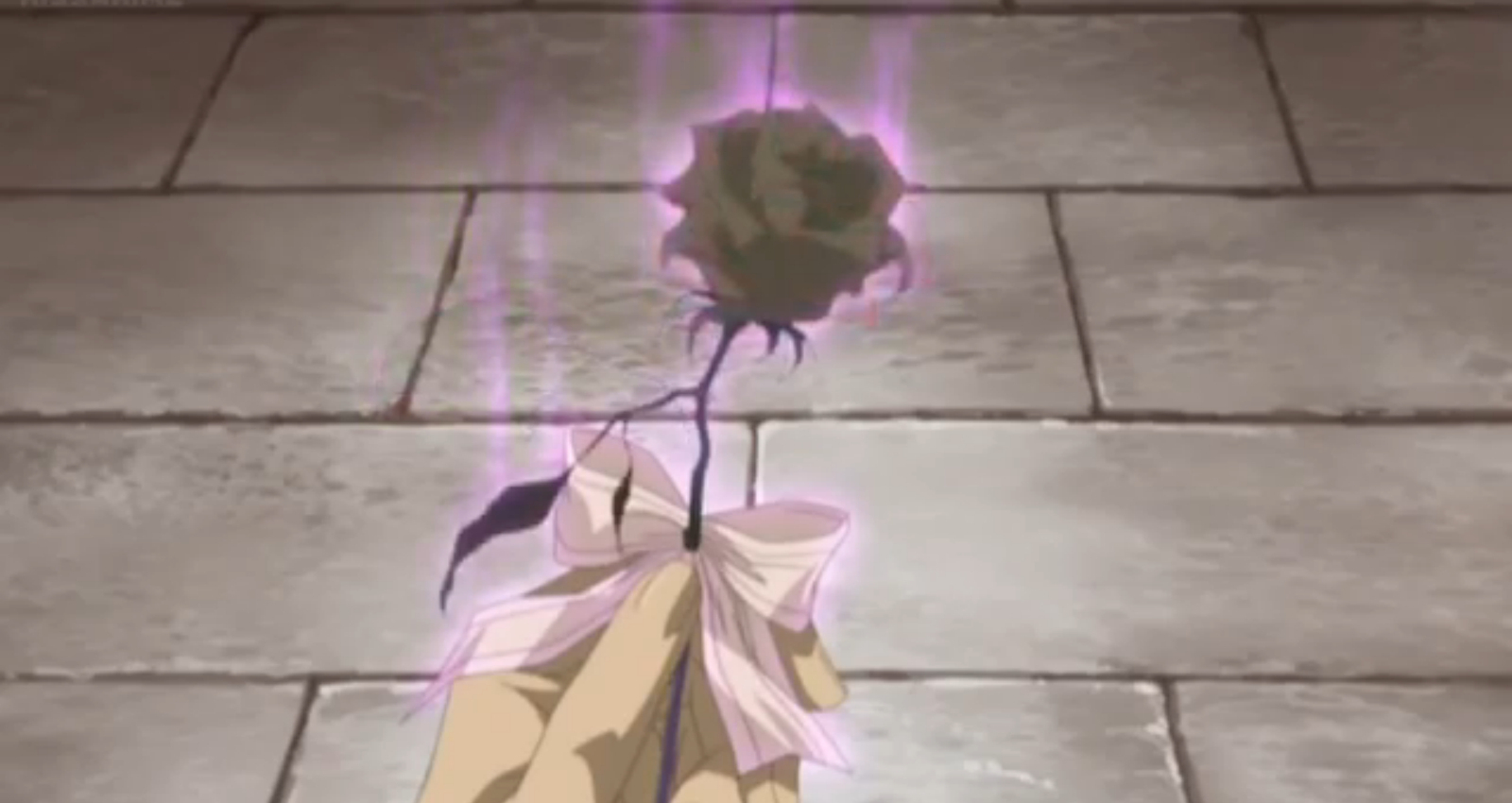 This is another important image that might be hard to catch. Now let's place it in perspective. The rules state that only a pure blooded vampire has the power to turn a human into a vampire. Once that human has been bitten, they will slowly degrade into a Level E. What this does is connect the most beloved of vampires to the most loathsome. It connects the beauty with the monster. Level Es are just vampires who've lost their pride and dignity. The sophisticated vampires in Vampire Knight are full of pride. They see humans as lesser beings and hold themselves to a higher standard. And why not? They're all rich, good looking, and accomplished. That pride coupled with their determination to put their blood sucking days behind them, makes things a little difficult when Level Es enter the picture. A Level E represents the ugliest part of themselves. They are a constant reminder that deep down, all vampires have that relentless animal instinct. So when they kill a Level E vampire, they are symbolically trying to punish that one terrible element of themselves. That element which they both love and hate about themselves. However, as terrible a reminder as this is for the average sophisticate, it's all the worse for Kaname.

The rose has many faces. It can represent love. It can personify romance. It can symbolize beauty. It can be the face of death, but in Vampire Knight, the rose means just one thing.

Taking everything I've mentioned into consideration, it becomes a little more noticeable that the rose in Vampire Knight is the symbol for Kaname's conundrum. 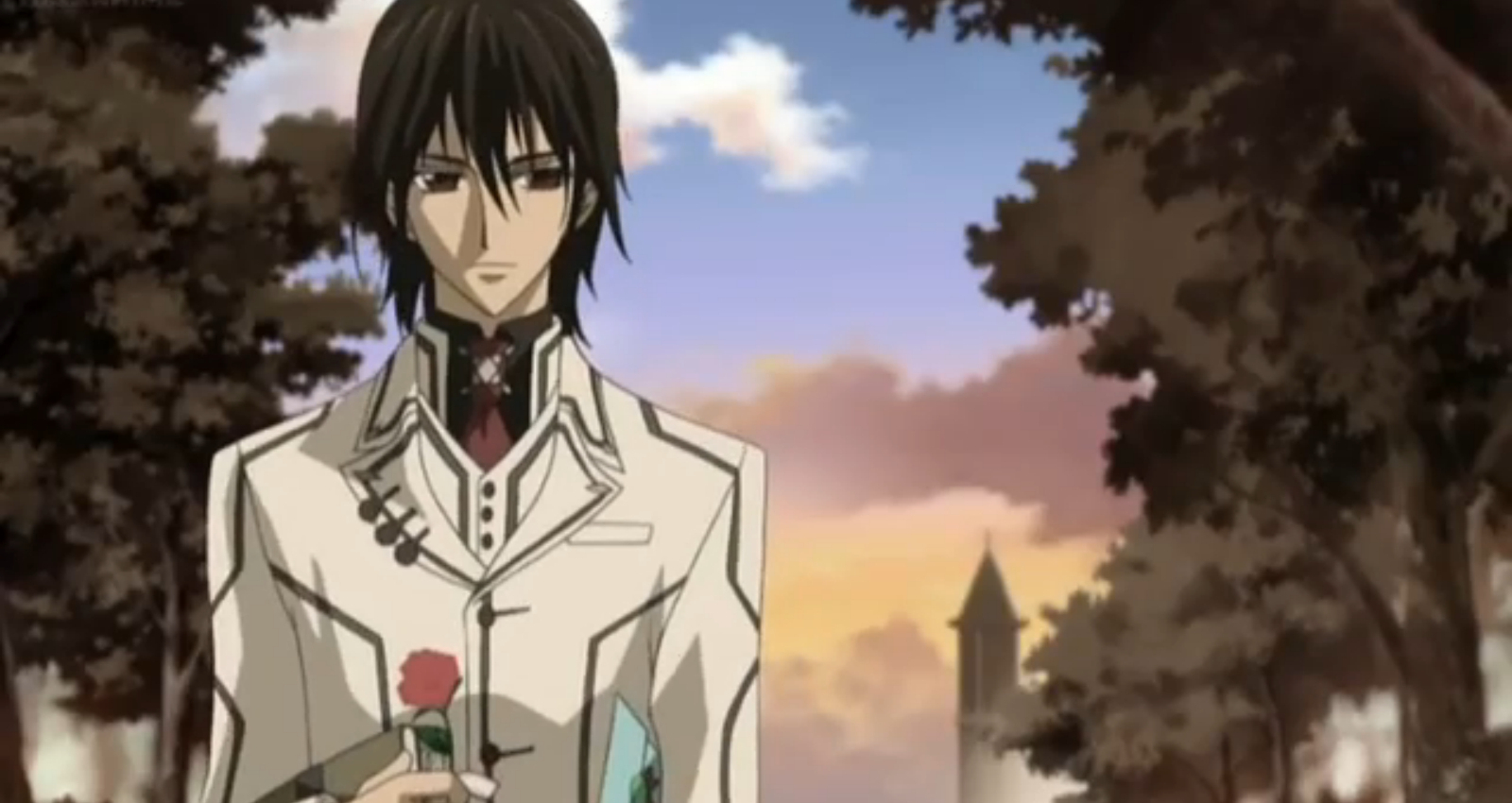 From the moment he saved her life, Kaname has been in love with Yuki. And from the moment he saved her life, Yuki has been in love with Kaname. It seems so simple when you put it like that. You'd think they would be together from the get go, but they aren't. So many things keep them apart and there's a rose on every one of those things. The rose is the symbol for the disciplinary committee Yuki is in. Her job is to keep both humans and vampires in line. She can't allow herself to compromise her responsibilities. This is where Zero comes in. Zero presents Kaname with three problems. The first, he is the only other person in the world that could take Yuki away from him. The second, Zero comes from a long line of vampire hunters. His weapon of choice is a powerful gun that's harmless to humans, but deadly to vampires. That gun is called: "The Bloody Rose." The third reason is the most devastating of them all. When Zero was a child, he was bitten by a pureblood vampire. He's doomed to become a mindless Level E someday in the future. He's a dying rose. A wilting flower. Remember when I mentioned that Level Es remind the sophisticated vampires of what they hate about themselves? When it comes to Kaname, this is also the biggest reason why having a relationship with Yuki is so difficult. 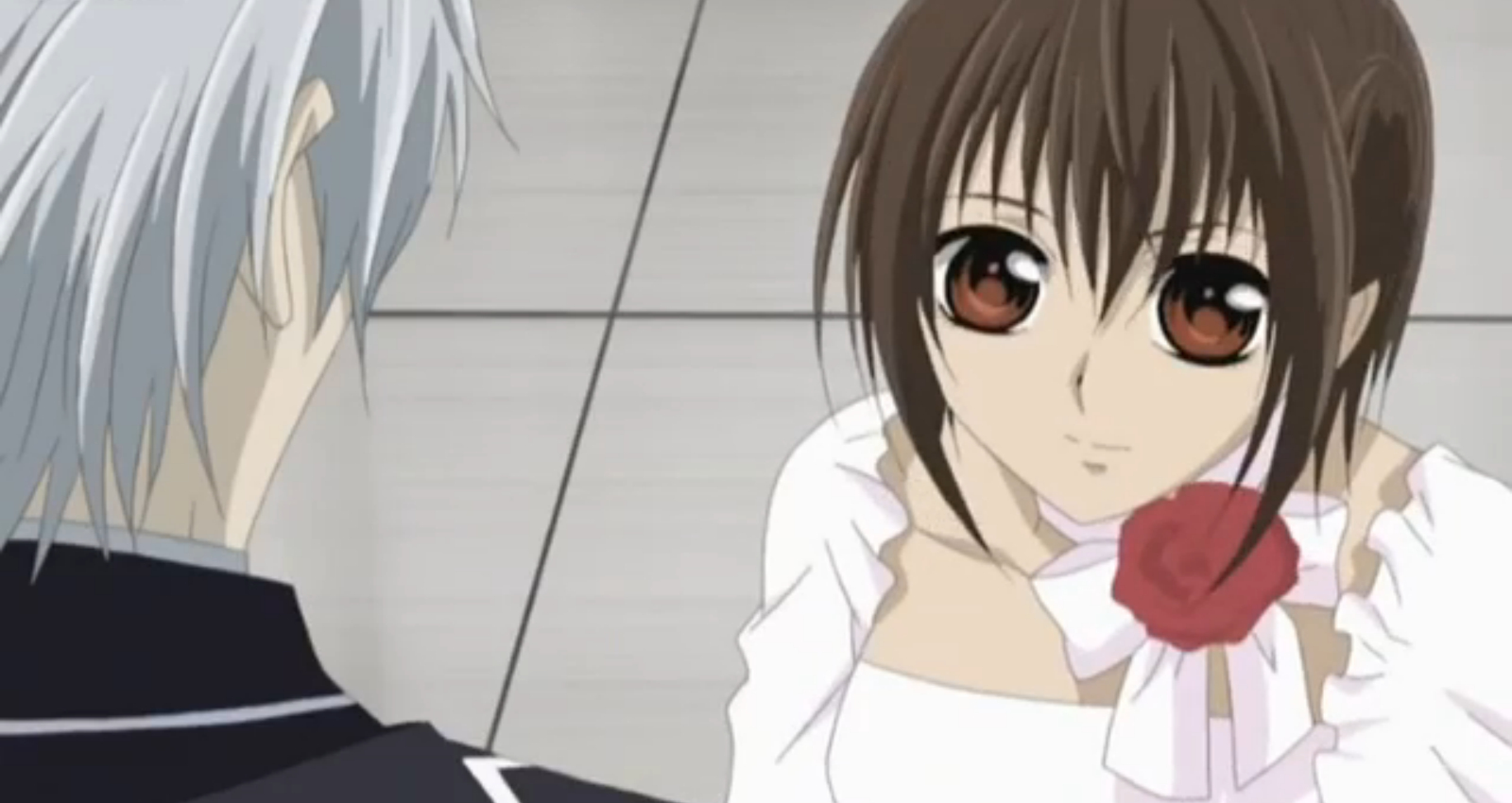 Kaname is a pure blooded vampire. When he bites a human, his victim will turn. His love is toxic. In his hands every rose will wilt. Only if he can suffer to keep his distance can he ensure Yuki remains safe, but to keep his distance is painful. To refrain from biting her is painful. To see Zero become so close to her is painful. To see her slipping away is painful and all he can do is whatever he can to make her happy. That is the conundrum of Kaname and it is beautifully summed up in one of the most powerful icons of them all: the rose. 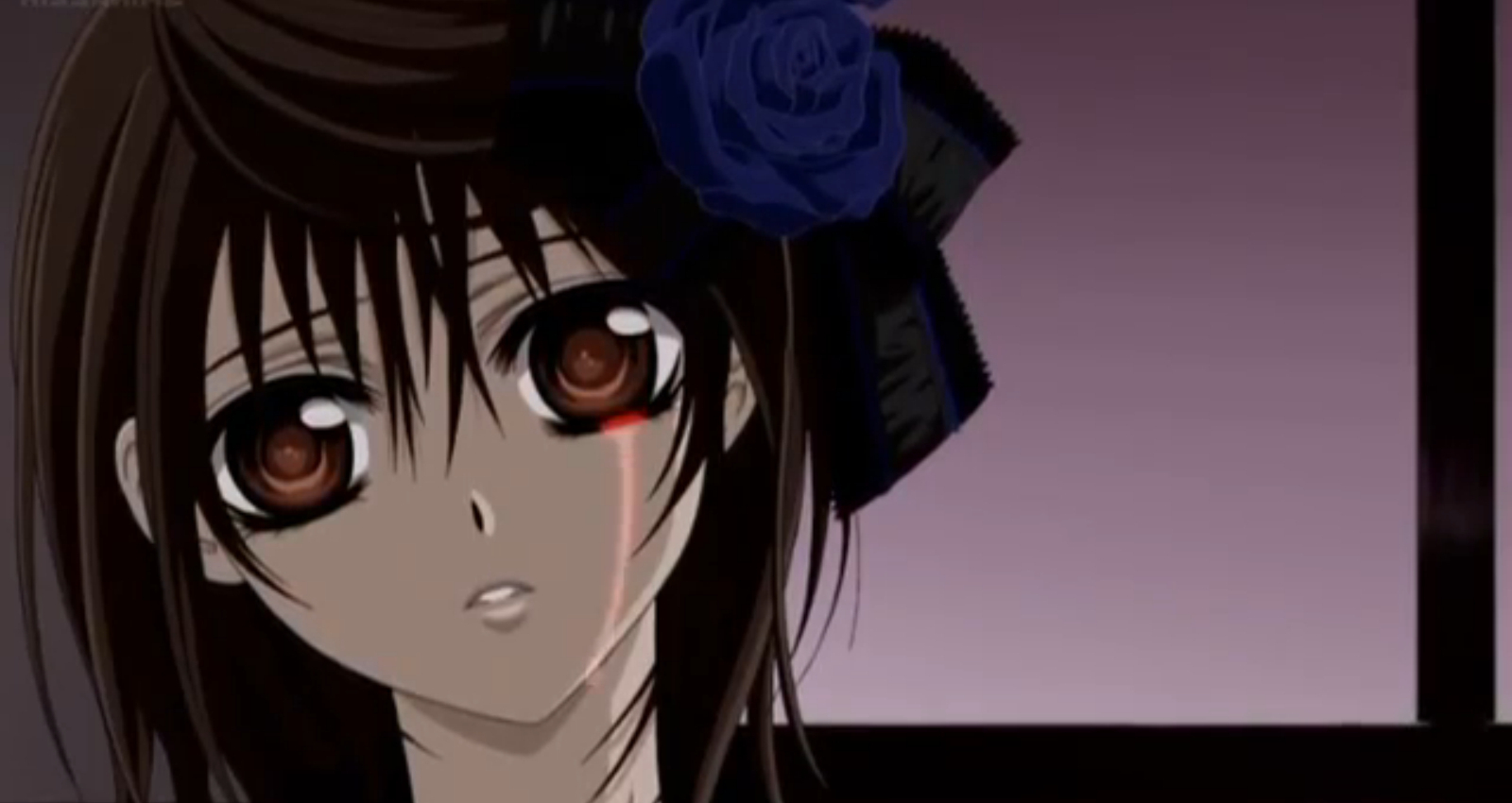 Pokémon XY: The Latest Installment to the Wildly Popular Franchise

Ever heard of Pokémon? I'm sure you have. But what sets Pokémon XY apart from the rest of the franchise? Well, let's find out!