In the Fullmetal Alchemist world, there are special armored appendages known as automail. Let's take a look at what these automail are and the who the characters that have used them throughout the series are.

The world of Fullmetal Alchemist is largely centered around alchemy— a fusing of science and magic, allowing human beings to conjure fire, make things explode, or simply turn a chair into a cannon with just a few hand gestures. So in a universe where powers like these exist it's no surprise that its scientific advancements have gone in a direction far more complicated and awesome than we see in real life. Let us take a look at the automail both found in its 2003 and 2009 anime adaptations.

Automail is just like real-world prosthesis only way cooler and scarier. It was originally created as form of body armor that can be used for combat purposes, but later advances in the technology allowed it to serve a more common function for amputees or people who just want to look cooler. 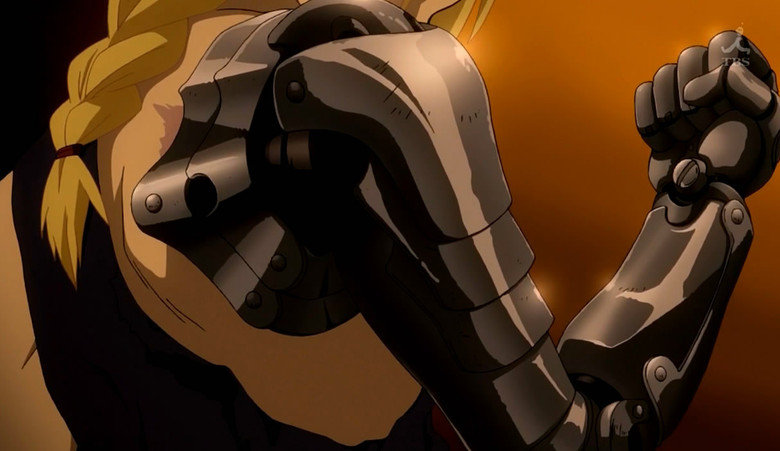 It is commonly made up of a full steel skeletal frame with steel armor-plating covering the more sensitive machinery inside the artificial limb. What makes automail such a viable option for amputees is that it doesn't need an external power source to operate and it can be used just like a natural limb. It's connected to the various nerves in your body that send electrical signals which operate the array of complicated machinery inside the automail. Though usually consisting of steel and iron, many automail users have included more technological advancements into their prosthesis. Some automail are composed of more durable and flexible materials such as carbon fiber, chrome, aluminum alloys, and fiber glass these changes are usually made to the artificial limb when the user is more exposed to harsher environments where normal steel or iron might not work properly.

Although it really looks awesome to have one of these bad boys on you, automail has its share of drawbacks. One major downside of automail is the painful installation process users must undergo for one of these limbs to be attached. Each nerve must be excruciatingly connected to a housing system on the body and since it's quite a delicate procedure, only highly trained professionals with experience in both fields of mechanical engineering and surgical medicine can perform installations. Apart from the painful surgery, they would also have to shell out some serious cash because most automail installations have a hefty price tag. 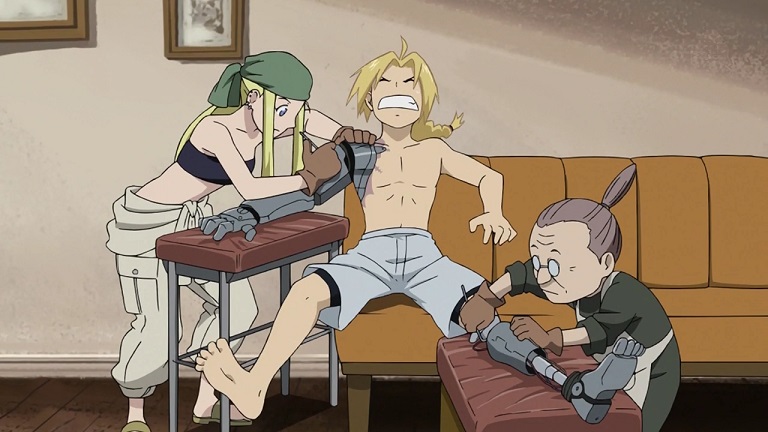 It usually takes about three years for a user to have full recovery and functionality of their automail limbs, but even after all of that time the owner must still undergo regular maintenance and upgrades for their automail parts. Maintenance of these parts usually involves removing the appendage altogether, thus causing more pain for the user. In extreme conditions an automaill limb can be quite troubling as drastic changes in temperature can affect its performance. As seen in the anime, automail users can experience a lot of difficulties when exposed to extreme weather conditions—in hot temperature climates, an automail limb can retain and conduct heat which can cause extreme discomfort for the user. (It's like having a hot piece of toast grafted to your skin) In cold temperatures, the standard oils used in the device can cause it to malfunction as well as making the user more prone to frostbite. 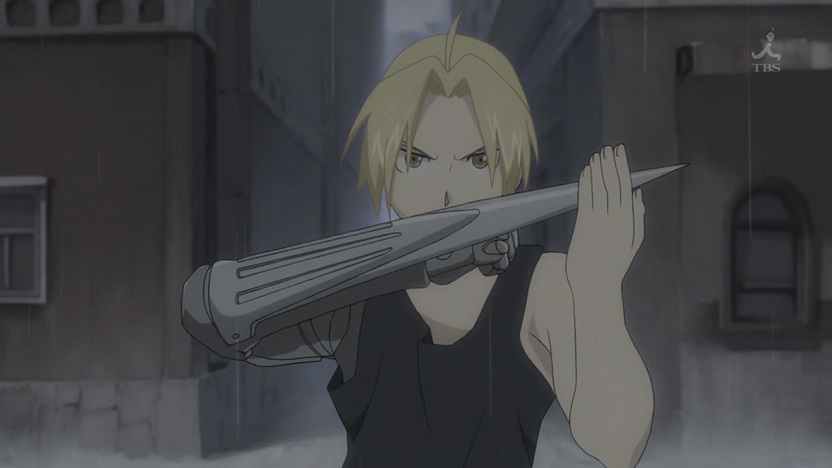 The small but heroic protagonist of the series—after a tragic accident that involved a transmutation circle, a lot of blood, and a malformed looking blob thing. (It's actually really sad...) Edward lost his right arm and left leg. (Oh, and his brother lost his whole body.) Good thing for the young Edward his childhood friend, Winry Rockbel who just happens to be an engineering prodigy was able to create an automail arm and leg for the young alchemist. His first automail model was made of steel, but after an unfortunate encounter with Scar the limbs were destroyed and were subsequently replaced with much lighter and rust-resistant versions. During their time in the northern base of Briggs, both his arm and leg automail parts were switched out with a more cold-climate friendly version—this time composed of aluminum and carbon fiber materials. In combat, Edward would use alchemy to alter his automail parts to fit a more offensive role—usually turning his right arm into a blade which he can use to attack his opponents. 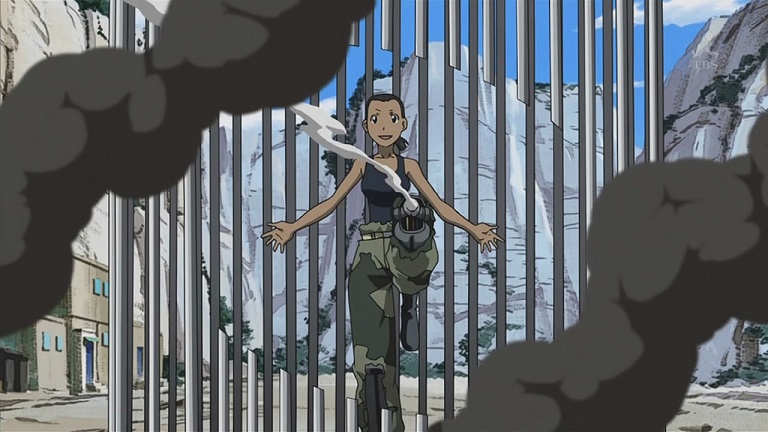 A mischievous thief from Rush Valley that has the handy trick of being able to fire grenades from her leg. (Yup, grenades. From. Her. Leg.) A terrible train crash that killed her parents also took away her legs. She was taken care of a small-time mechanic named Dominic Lecoulte who promptly fitted Paninya with two automail legs. Her automail legs are incredibly lightweight which allowed Paninya to easily outrun the Elric Brothers during their first encounter. In addition, her right leg conceals a blade which she can use to slice at her opponents, and her left leg has a hidden 1.5 inch grenade-launching carbine.
A bit of Trivia: In the 2003 anime, Paninya also has an automail right arm since the creators of show wanted her to first meet Edward during an automail arm wrestling competition.

As seen in Paninya's automail—these parts can also be customized to be more offensive rather than just being an enhanced alternative for amputees. Automail has become a tool to further improve the military capabilities of nations, developing what is known as "Combat automail." Expert engineers employ various methods to include weapons such as hidden blades, diamond-tipped claws, and even heavy armament into automail parts. This leads to individuals that voluntarily replace their normal limbs with automail in order to become more effective in armed combat. (No pain, no gain...)

An officer stationed at Fort Briggs with a large stature that often leads people to mistake him for a bear (with an awesome Mohawk). Captain Buccaneer is known to have two combat automail parts both of which he interchanges depending on what the combat situation requires. The first time we see the captain's automail is when he first encountered Edward Elric near Fort Briggs—using his model M1913-A combat automail, nicknamed "Crocodile" to easily overpower the young Alchemist. This automail sacrifices normal arm functions for more combat-oriented capabilities. The arm itself is a huge gas-powered chainsaw with movable jaws, hence the name "Crocodile." This model also has the added function of protecting Buccaneer from frostbite since the automail's gas exhaust can be used to heat the captain's arm. He later changes his automail arm with the M1910 "Mad Bear Grade" model—a more terrifying type of automail that has retained some standard use, but is still very viable in combat as its durable frame coupled with its diamond-tipped claws at the end of each finger can easily tear an opponent to shreds. 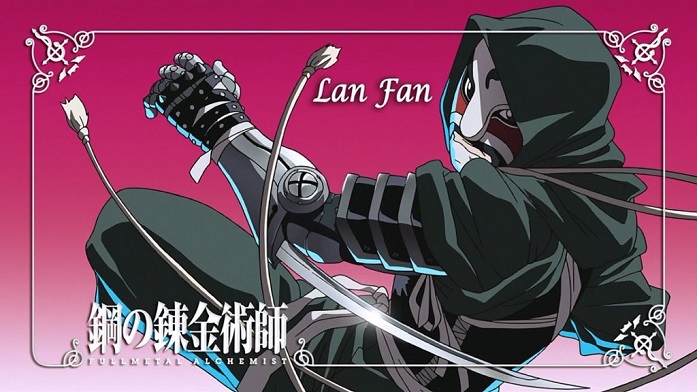 A ninja with a mechanical hand that doubles as a sword. After an unfortunate encounter with Gluttony and Wrath, Lan Fan was forced to cut off her own arm in order to save herself and Ling. Her arm was later replaced with a combat automail arm— it has spikes around the hand as well as a long blade that extends from the bottom of her elbow.

Automail users exclusive to the 2003 anime 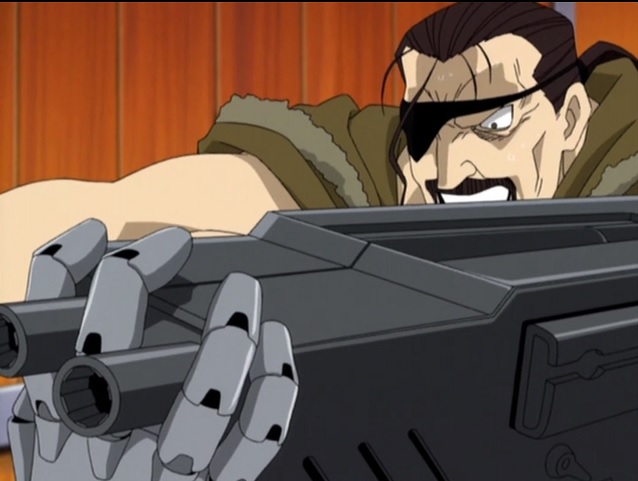 A character which was only introduced in the manga and the 2003 anime—he is a high-ranking member of the Amestrian extremist group called the Blue Squad. His uses a combat automail arm that functions as a high-caliber double-barreled rifle. 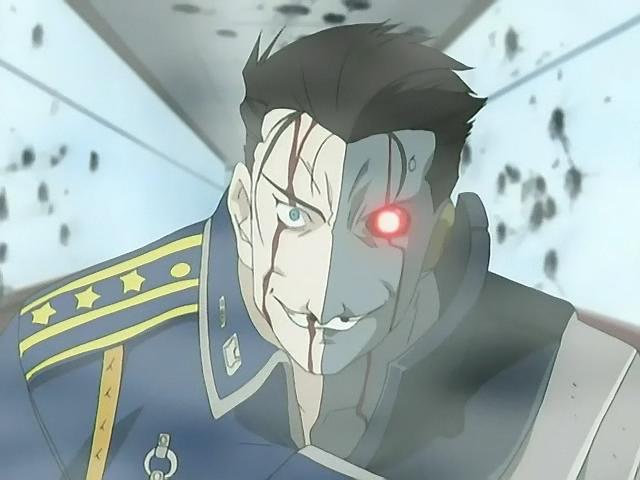 Note: This might not be considered canon as this character only appeared in the 2003 anime adaptation of FMA.
In the 2003 anime, an extreme form of automail is introduced known as "full body" automail. In the case of Frank Archer, nearly half of his body was destroyed during a tragic disaster and was replaced with automail parts. His head and most of his body parts were made into automail components that have extremely high combat capabilities. Frank's left arm became a anti-tank rifle while his mouth concealed a mini-gun. He is as close as we can get to an actual cyborg appearing in the anime.

Apart from its amazing alchemy, the automail found in the series have also added a unique twist to the anime's world and overall lore. If you're interested in watching these mechanical limbs in action make sure to watch the Fullmetal Alchemist anime and tag along with its epic journey where you'll meet all kinds of characters that are both iconic and quite awesome.