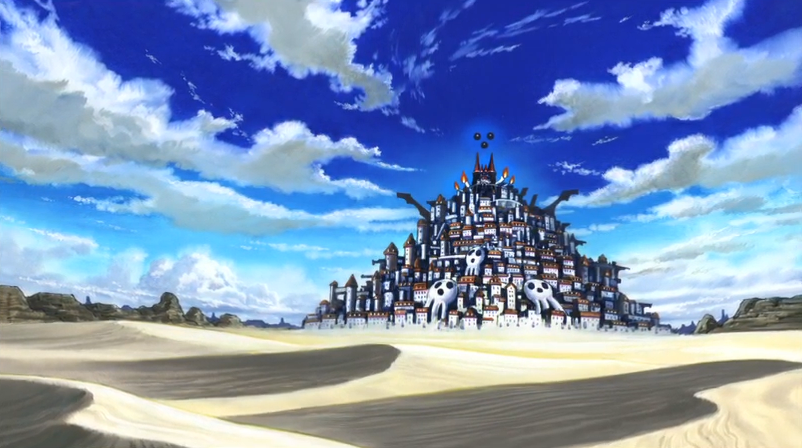 Death City, the main setting of Soul Eater and also sometimes referred to as Death Vegas, is located in the Nevadan desert. From a distance it looks like a macabre take on an Egyptian pyramid, being a misshapen white and red cone of buildings and skulls standing in solitude amidst the scorching sands. And just to make extra sure that you know Death City has a supernatural air to it, there are the three black orbs floating above the very tip, made to resemble the undisputed master of this city. This is a place that is entirely separate from the rest of the world, both in a physical and spiritual sense, which is something the director wants the audience to know just from a glance.

There are a lot of visual cues that present Death City as a dark and sinister place. The long and winding roads that go through the city are almost labyrinthine in nature, the skull of Death is prominently displayed everywhere, the buildings seemed to be placed almost haphazardly and jut out seemingly at random, and both the Sun and Moon watch over everything with off-putting smiles. This gives the city a very Halloween aesthetic to its appearance, which is fitting considering both the atmosphere as well as the people who call it home. 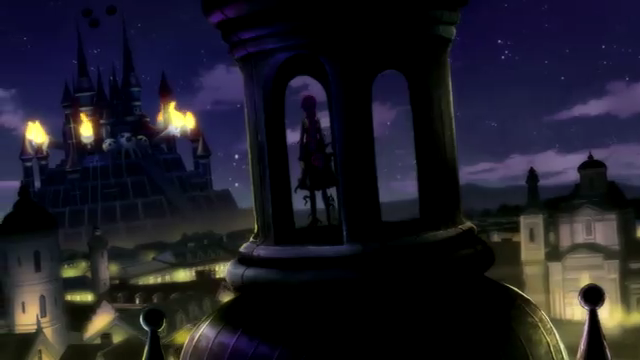 Death City somehow manages to create a strange sort of harmony out of two very different atmospheres. Not unlike the Halloween Town of Nightmare Before Christmas fame, Death City combines the eeriness of the monstrous and the grave with an undeniable liveliness and energy. This is thanks in large part to Soul Eater's wonderful soundtrack, which presents background tracks for the city that are both jazzy and exciting as well as haunting and dissonant. Music is a great way to characterize a location because it can easily evoke a certain emotional response from the listener and put them in the shoes of whoever may live there.

There is nothing one-note in the city, evidenced by the contrasting music and imagery, and there is a strong sense of duality throughout. If anything, Death City appears to exalt everything about Halloween, both the good and the bad. Monsters and witches lurk in the shadows, certain buildings appear stitched together in a way that evokes Frankenstein's Monster, and there are pumpkins aplenty, especially at Blair's house. 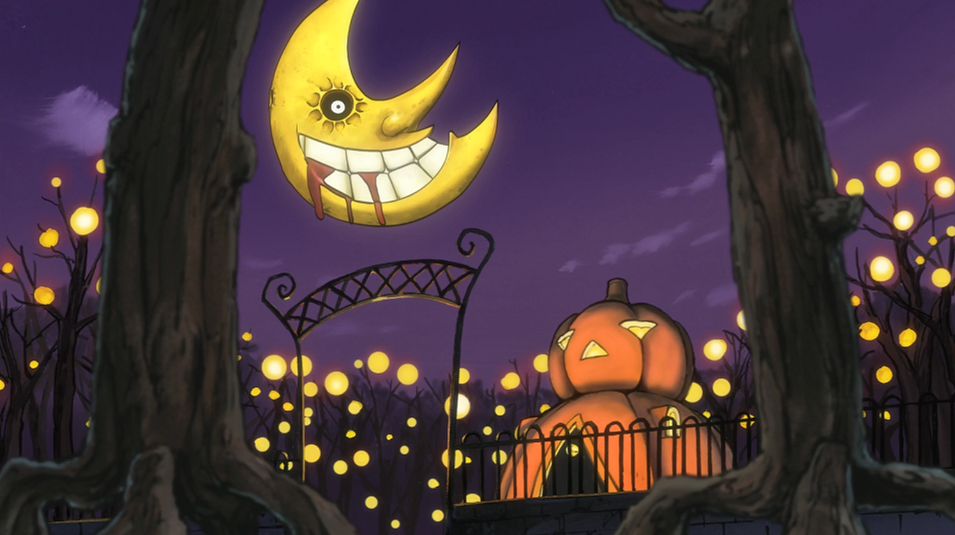 But it's still a city, which means there will be a ton of people living alongside all of the weirdness. Countless average humans going about their normal, everyday lives call Death City home. The strange and the normal coexist here peacefully, thanks to the efforts of Lord Death, the meisters, and their weapons. While there is still the thrill of something eerie around the corner that permeates the air, Death City still feels like a place that's lived in, instead of a random and empty backdrop for the adventures of the protagonists. This normalcy is crucial; not only does it give the main characters a place worth protecting, but it also provides the audience with a connection to reality that helps them empathize with what's happening on-screen. 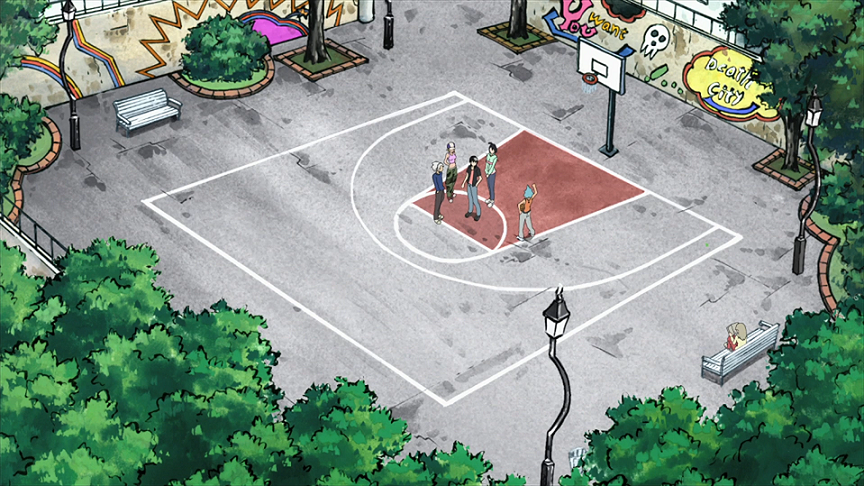 Located at the very top of Death City, Death Weapon Meister Academy, or the DWMA for short, is easily the most important location in the entire city. In fact, it is suggested that the city was created around the academy in the first place. It is here where meisters and weapons are trained in the safe use of their unique abilities so that they may be better equipped to do battle against the evils of the world.

Appearance-wise, the academy looks nothing like a school dedicated to fighting witches and monsters would suggest. Fitting its headmaster's... eccentric personality, the DWMA appears to be a castle with Death's face plastered all over its walls and gates with various forms of expression. Enormous candles that burn day and night protrude from the ground level, which can make one think of an odd, skull-fixated birthday cake. 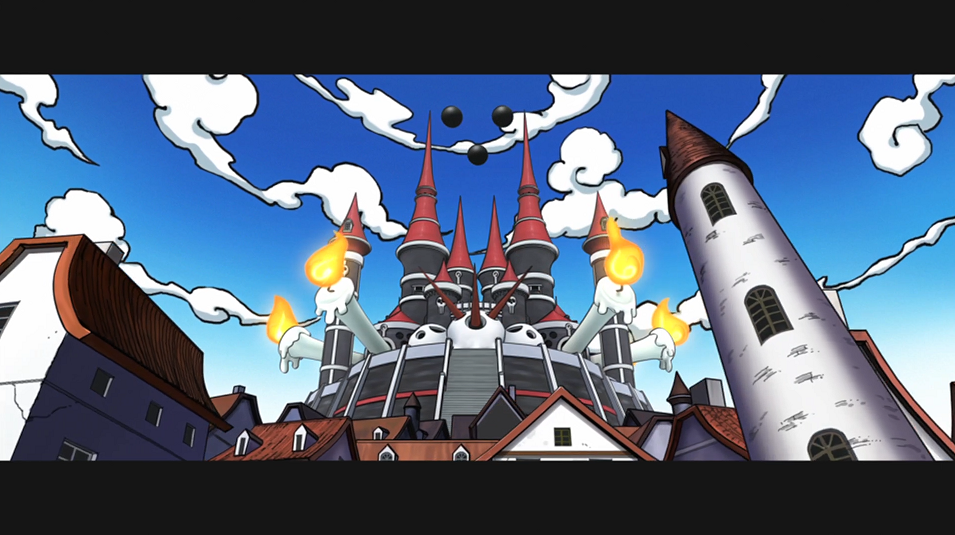 This goofy exterior does a good job of hiding the truth that the DWMA is in fact one of the world's most powerful organizations, able to govern and deploy a military in its own right. Thanks to the backing of their Lord Death, their influence reaches to branches all across the earth. This elevates Death City into a nation unto itself and is in fact the true nature of the city as a whole. Death City is a city of duality: strange and normal, goofiness and might, life and death. All of these aspects are equally applicable and vital to the city and contribute to what makes the setting of Soul Eater a character in its own right.