The final episode of this season of Durarara!!x2 Ten where we learn the truth behind Yodogiri Jinnai and see just how far off the deep end Mikado has gone! 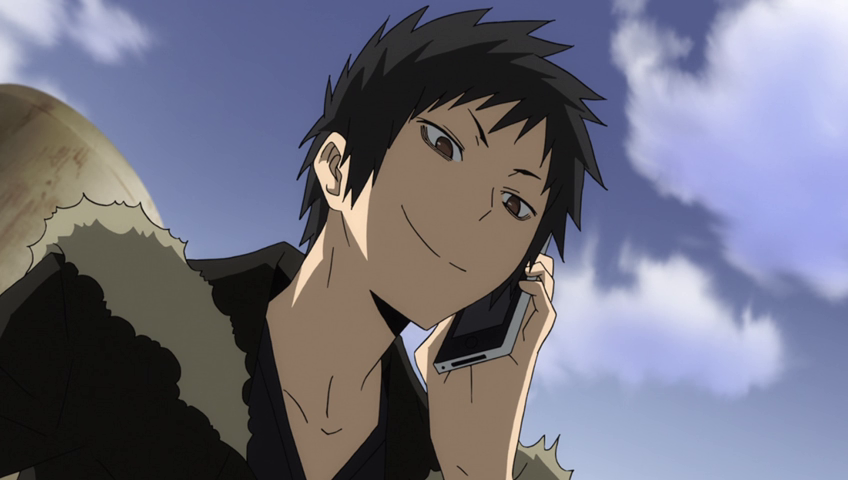 Durarara sure spends a lot of time setting things up. It's like setting up lines of dominoes to fall in an elaborate fashion complete with multiple layers. You know the kind of dominoes that climb up sets of stairs and use little domino lifts like the type Seki-kun would set up in Tonari no Seki-kun. It's fun to watch Durarara set all of this up, even though you know the end of the arc will end surprisingly quickly for all the effort put in and will feel a little less satisfying than you anticipated. In a way then, perhaps it's better that Durarara is continuously building up this Yellow Scarves vs Dollars battle. Each episode adds more and more intrigue to the situation surrounding Yodogiri Jinnai. Each episode sees Mikado fall deeper and deeper into his own righteousness that he can't see how wrong he is, even when Celty points it out in plain language to him. Unless this arc somehow ends with Shizuo kicking a van down a street again, I can't see this arc ending in a way that feels like a proper culmination of everything that came before it, so let's enjoy this wonderful ride while it's still going on. 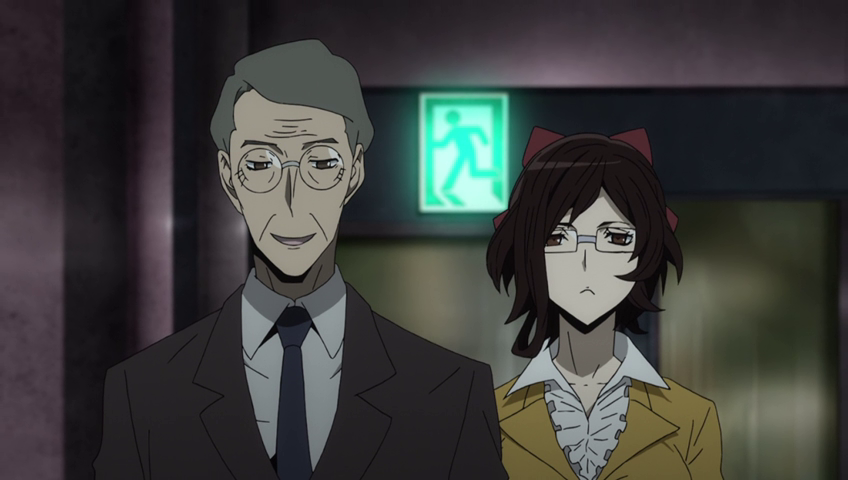 Let's go back to the point of Yodogiri Jinnai. In previous episodes I got exasperated when they appeared to be naming multiple random old men Yodogiri Jinnai, pinning the blame on Durarara for introducing too many characters so I couldn't keep up. Turns out I wasn't giving Durarara enough credit. The confusion was intentional, which should teach me for being a loud-mouthed critic whining about too many characters. Yodogiri Jinnai is more of a title than an actual name. It's a bunch of old guys who trade information between themselves, each one pretending they are Yodogiri Jinnai. The scene where Izaya chatted to one of them on the phone had that brilliant shot where halfway through the conversation the old man got thwacked by the car. What I loved about that scene was Izaya's timing, repeating the line said to him before he was stabbed. It was his way of one-upping a potential rival with the ever cliche idea that "anything you can do I can do better". The real mastermind behind events though was the soft-spoken secretary lady who follows the old dudes around. There was a shot right at the end of the episode where...well, let me just show it to you. 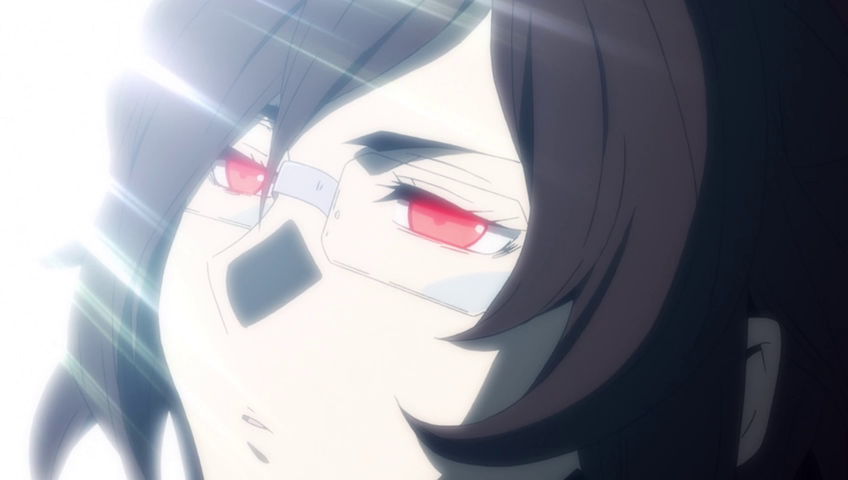 You see those eyes? Those are the eyes of someone being controlled by Saika. Or maybe a host of a Saika-esque sword. She did appear to have an unusual amount of knowledge about the sword's power. If I had to guess, she probably is the owner of one of Saika's children, but is fully in control of her actions and lives a peaceful coexistence with the sword. We know it's possible as Anri appears to be slowly but surely making some kind of peace with Saika herself. I didn't expect Saika to be taking such an important role in the story, but it looks like this arc won't be coming to a close without Anri taking part somehow. 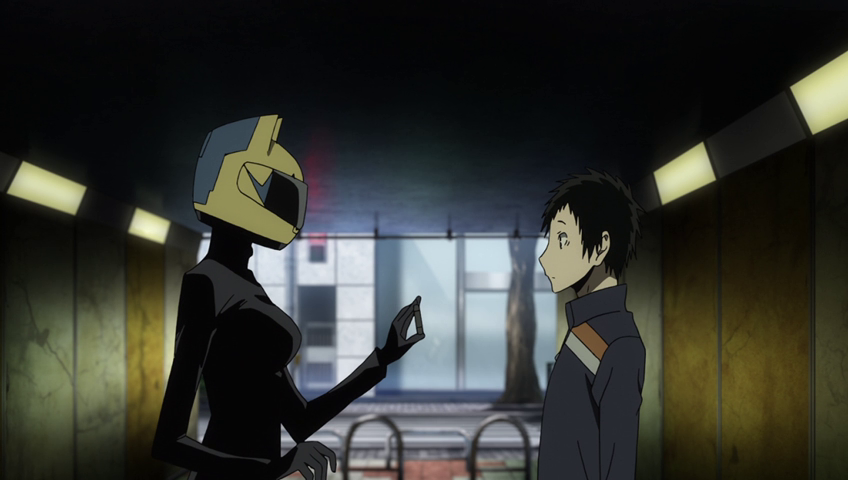 The other best part of this episode was the conversation between Celty and Mikado. It demonstrated just how far gone Mikado is now. When you have a mythical headless Irish biker fairy as the more rational and sensible member of a dialogue, you know you've reached the dark side. Although that's not being fair to Celty. In a world of people with giant egos and bigger tempers, she's possibly the most human character of the lot. Especially now that Mikado has gone off the deep end. She watches daytime television, gets scared by the police, and makes a fuss over her sick boyfriend. Still though, there was something wonderful about Mikado's facial expression when Celty tried to talk him out of his crusade. It was as though he felt Celty was being patronising towards him so he tried to be patronising back. It was a facial expression that screamed "you do know that I know what I'm doing, right". 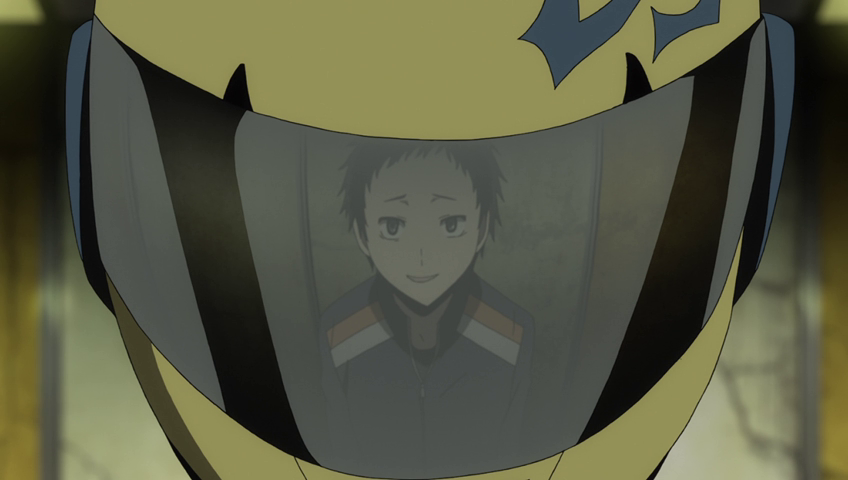 Look at that face of his. It's almost like he's trying to do the Izaya smug face but his features don't know how to contort themselves into looking smug. Although it's more likely that he's trying to imitate his new blue-haired friend rather than Izaya. Some people just have naturally smug faces. Really looking forward to seeing where Mikado's mad journey takes him next. Usually at the end of a season I would write some kind of final impressions for the series as a whole, but that's not really the case with this season of Durarara. The next season coming up in winter barely counts as a proper new season. It's more of an unusually long break between episodes. I will say though that it's a huge relief that the animation never dropped to the basically non-existent levels it did in the winter season. On the whole, it's been very enjoyable altogether and I'm looking forward to writing about the next season, come the new year. I hope you will all join me then!