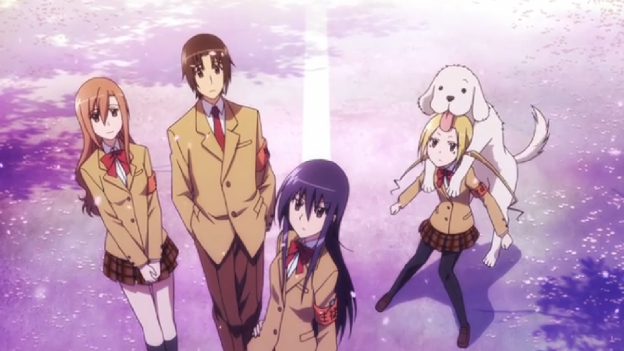 He is a first year student and the main character that Seitokai Yakuindomo revolves around. During his first day attending Ousai Academy he is approached by the girls from the Student Council and is unexpectedly appointed as their vice-president and thus becomes the only male within the student council. Unlike the other male students who are depicted as deciding to attend Ousai Academy because there would be an abundance of females, Takatoshi decided to enroll there because it’s conveniently not too distant from his home.


Takatoshi has the appearance of an average looking high school male student and is also thought of as being attractive by various female students at the academy. He has dark brown hair with his layered bangs parted at the fringe and brown eyes that are slightly lighter than the colour of his hair. He is the tallest member of the Student Council and often helps out the girls by grabbing items from higher places they can’t reach. Despite Takatoshi’s slim frame, he has well developed muscles and so they leave all of the heavy lifting to him.


When the female members of the Student Council (or anyone else) make indecent jokes, Takatoshi has an instinctive habit of responding to them with witty comebacks. While he was still new to the Student Council he would be shocked by the indecent and perverted comments the females would make, but as time passes he becomes used to their behaviour and would find it unusual if they didn’t say these things. He has a somewhat laid back personality and likes to be lazy and slack off as much as anyone else, but when it comes to the times when Takatoshi has to stand up and get something done he can become rather serious and get to work. He doesn’t obtain the highest grades at school and is rather oblivious to matters relating to love, yet Takatoshi is quite skilled when it comes to writing things of depth, capable of even bringing the readers to tears.


Takatoshi is also known by everyone as being a diligent and very caring person and so will always help someone out when they ask him, a quality he has that attracts the romantic attention of females. He and Shino are always seen together as they are vice-president and president of the student council and get along quite well, which leads to rumors being spread about them dating and is the reason that the female students with romantic affections for him don’t confess. Takatoshi has a lot of respect for the female members of the student council, despite their constant indecent jokes. The member he tends to be the most wary around Aria as her indecent jokes and perverted remarks are the worst out of the three girls. Suzu is the person he gets along best with as they are both diligent and serious about their duties within the student council.

Shino is a second year student and the president of the Student Council at Ousai Academy. She is very popular and well respected by the students. Even though she is quite serious most of the time, she has a rather perverted mind and mentions that she has a curious interest in Takatoshi as he’s an information source for what she hasn’t been able to learn within health classes. Shino has long dark purple hair with faded purple colored eyes. She is very smart and is talented in most of her school subjects. Shino is easily excited about events - she likes them so much that she won’t get any sleep the night before them. She also has a talent for sports. She is very afraid of insects and heights. She is very self-conscious about her small chest size. Shino has a love for animals and also has a stuffed bear which is tied up with rope and has a ball gag in its mouth, given to her by Aria for her birthday.

She is the Student Council Accountant and in her first year of high school after returning from living in a foreign country. Out of all of the Student Council females, Suzu is the most mentally mature, but is easy to anger. She has to nap every day after lunch and go to bed at 9pm which makes her seem a bit childlike. She has long blonde hair that's parted into two pony tails, and light brown eyes. Suzu is highly intelligent with an IQ of 180 that she tends to boast about, and has a photographic memory, so she can remember anything she reads by just flipping through the pages of a book. Along with this, she is multilingual in Japanese, English, Spanish, Italian, and French and can perform 10-digit calculations within her head. Being the shortest out of all of the Student Council members and still having the appearance of an elementary school child, Suzu is very self-conscious about her appearance. Due to this, Suzu loves high places as she states that up there she is able to look down on everyone else. She respects the other Student Council members highly, despite their perverted natures and the stress it can cause her.

She is in her second year at Ousai Academy and is the Secretary of the Student Council. She has long light brown hair and has light brown eyes to match. Aria has the appearance of being the most mature member of the Student Council and is from a wealthy family. Although she is very perverted and seems to have an obsession with bondage, Aria has a gentle ‘motherly’ kind of personality and easily gets along with other people. Due to her growing up as the pampered daughter of the rich and famous Shichijo Group, Aria tends to space out while doing ordinary things. She will space out while standing in front of a normal door while waiting for it to automatically open for her, or she will mistake a staircase for an escalator. Unlike the other females of the Student Council, Aria has been blessed with large breasts and doesn’t appear to be self-conscious of her physical appearance. Aria also has a talent of being able to turn any ordinary conversation into something perverted with ease. 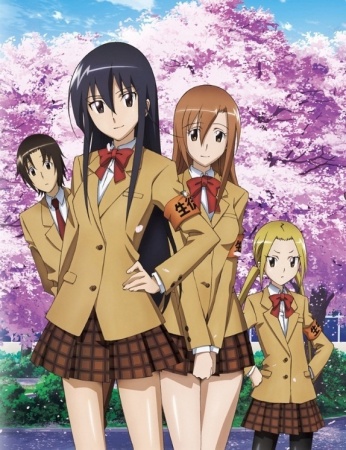