In this week's Prison School, two characters fight it out but not with their fists. It isn't Prison School if the duel is straightforward. Gakuto's plan to prove their innocence also comes to a climax in this final episode. 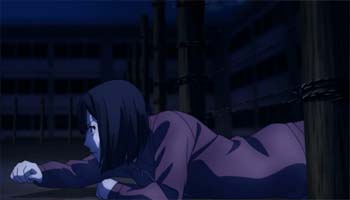 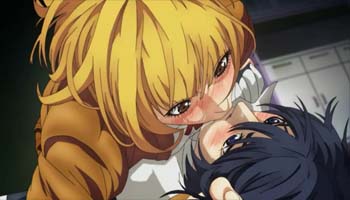 In the last episode of Prison School, Kiyoshi is left with the task of unlocking the back door so Chiyo can sneak in. There's a slight problem, because Hana is currently kissing him aggressively. It's her revenge for all the things Kiyoshi has done to her. Kiyoshi tries to get away from Hana, but she is relentless. The entire first half is really just this crazy scene of Hana and Kiyoshi kissing. It spells badly for Kiyoshi because Chiyo is already waiting on the other side of the door, and it'll be trouble when she finds Hana getting Kiyoshi's first kiss. Kiyoshi had to act fast, and he realized Hana is just pressing her lips against his. To him, Hana is doing this as child's play and he finds a way to finally end it. The mental chess game, which suddenly spiraled into the most passionate showdown between two characters, ends when Kiyoshi starts to tongue his opponent. Yes, he french-kissed the living hell out of an unprepared Hana. She was caught off guard that she had a nose bleed, and then passed out from the shock. With his opponent down and out, Kiyoshi finally unlocks the door with Chiyo unaware of the battle that ensued in the correction office. It's now up to Chiyo to find the DTO plan, and she needs to act fast because Mari is already aware of Gakuto's plan. 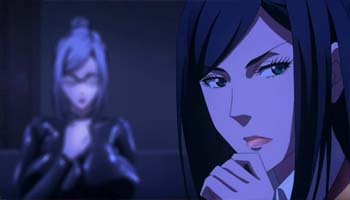 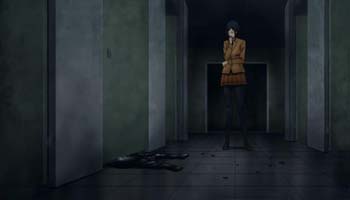 In the previous episode, Anzu got herself caught by Meiko so Chiyo could enter the prison school easily. When Anzu is being interrogated by Meiko, Mari suddenly realizes that Anzu might just be a pawn. She immediately enters prison school, and the exciting climax of Chiyo running for her life from the Underground Student Council is about to commence. That's what the show heavily hinted at but, when Mari inspects the place, everything is normal. No one is sneaking around, and the inmates are actually sleeping. She checks the area, while Meiko provides us with a parting fan service by ripping off her cat suit, and Mari finds nothing out of the ordinary. The inmates aren't planning anything, and Mari is happy knowing that the boys finally realized they have lost. She knows victory is within grasp, and the boys will finally leave the school. Of course, she isn't aware that Gakuto's plan had already succeeded. 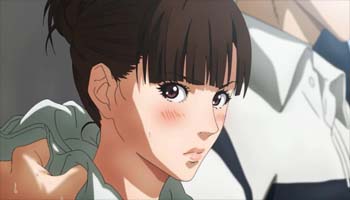 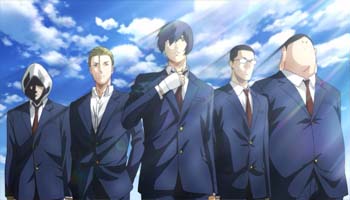 At the day of the expulsion, the boys and the Underground Student Council meet in the chairman's office. Before the decision is made official though, Gakuto bursts into the room half-naked and the Underground Student Council is confused. Meiko suddenly notices that the one acting as Gakuto is actually Joe, and the one under Joe's hood is none other than Chiyo. Gakuto's plan worked like a charm, and no one saw it coming. His plan involves Chiyo actually joining the boys, Gakuto himself looking for the DTO e-mail and personally delivering it to the chairman. It's a checkmate for the inmates, because the DTO e-mail contains all the devious things Mari inflicted on the boys. With the solid evidence, the boys are finally free. It's an amazing moment because you're in anticipation on what would happen next, and hearing the chairman declare their freedom is the greatest payoff here. 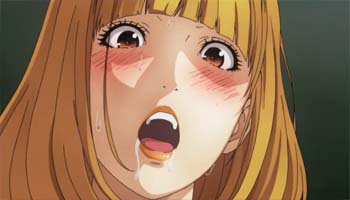 A lot of characters got their share of the spotlight. From Meiko providing her own unique brand of sleazy sexed up punishments to Mari showing off her cocky "I win" face, the characters really made this final episode special. Hana probably stood out the most by kissing Kiyoshi. It's aggressive, erotic and weird because it's just Hana losing her mind trying to get back at Kiyoshi. Her reaction after getting frenched is pretty priceless though, as you see her eyes roll at the back of her head and then slinking away as if drained of her energy. Hana is insane, but she's a child in the inside. Despite her brute personality, Hana is actually the most feminine character in her group. Kiyoshi exploits this every time, and they might go all the way the next time they meet. Given how unstable Hana is, it's not that surprising if they actually do it. 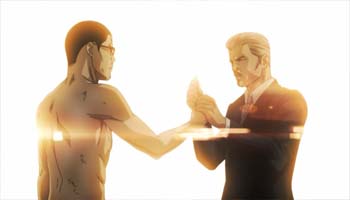 Gakuto foiling Mari's plan is the best moment in the show. He always puts his entire life on the line just to get his plans to succeed, so it's fitting that he's the one delivering the victory for his team. There's a triumphant feeling the moment Gakuto appears in the chairman's office. Mari's defeated look is satisfying to watch, and Gakuto finally got the moment he's been clawing for since the first episode.

Predictions for Beyond the Anime 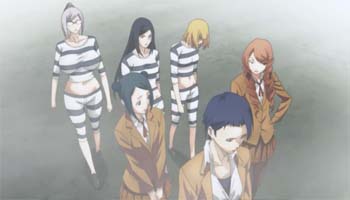 So far, there is no announcement of a second season. There is also a feeling of dread when the show closes with the boys living the school life they've dreamed of. The dreadful feeling is replaced with uncontrollable excitement though when the Underground Student Council, for breaking the rules by doing the DTO plan, will now go to prison school. They don their prison outfit, and a group of unnamed characters act as their guards. It's a signal that this anime is far from over, so expect another season. 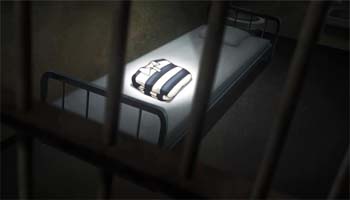 With a second season in mind, the boys might go back to prison only to help the Underground Student Council in their fight against their prison guards. The feelings between Hana and Kiyoshi's complicated relationship might intensify, Gakuto and Mari might come up with some awesome plans, and Meiko's fondness for the boys might turn into something more serious. The possibilities are endless given how amazing this anime is.