Space Dandy takes viewers on a wacky journey to the furthest reaches of the universe. Along the way, they meet all kinds of odd characters―humans, robots, and aliens of every kind. Let's get to know the intrepid space crew of the Aloha Oe and the space creatures they meet...in space!

The cast of Space Dandy is strange and diverse, a collection of every kind of creature from all across outer space. But who are these interstellar beings? Where do they come from? Why does nothing seem to change for them, no matter what kind of trouble they get themselves into? Truly, these characters are an odd bunch. Let's get to the bottom of things, shall we? 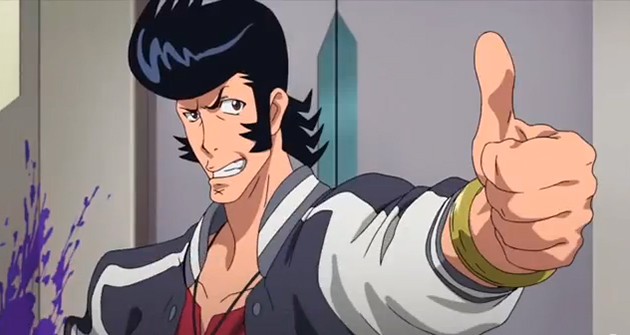 Handsome, suave, and adventurous, Dandy (Space Dandy to you) is a human bounty hunter whose charm is matched only by his laziness. He travels the galaxy in the Aloha Oe, his spaceship and bachelor pad, searching for rare aliens. The Space Alien Registration Center pays handsomely for undiscovered species brought to their attention—and besides, alien hunting beats real work.

Dandy is a simple man, of simple mind and simple tastes. Although he enjoys his adventures that take him from one end of the universe to another, he likes nothing more than to relax with a stiff drink and some pretty girls by his side. He's a ladies' man and a serial heartbreaker, as he himself would be quick to tell you, and dreams of one day buying out his favorite "breastaurant" chain: Boobies, famous for its excellent food and busty waitresses. Both are major weaknesses of his, and his love for breasts frequently drives him to escape impossible and dangerous situations.

Despite—or perhaps because of—his magnetic personality and relaxed philosophy on life, Dandy is oblivious and easily fooled, drifting from world to world in search of a big score that will allow him to retire. He prefers to "Live with the flow, baby!", rarely turning down a rumor or opportunity for adventure and cash. It helps, then, that he's also extraordinarily lucky; although he's a terrible shot with his laser pistol and frequently causes catastrophic collateral damage, one way or another his clumsiness usually lands him the victory.

That's not to say he can't or won't work hard when it suits him. Dandy's freewheeling lifestyle makes him resourceful and adaptable, and he's picked up lots of skills along the way. He's an ace pilot and a master surfer, as well as a skilled diplomat due to his natural charisma. Mostly, though, he would rather find ways to spend his time eating, sleeping, and reading porn magazines. He puts up a carefree and often selfish exterior, but on the inside he harbors quite a soft spot for dogs, children, and friends. If anyone earns his respect, there's nothing he won't do for them...if he remembers to do it, that is.

Recently, the powerful Gogol Empire has declared war on Dandy, attempting to capture him to further their plans of universal conquest. According to them, Dandy has the rare ability to manipulate a mysterious element called pyonium, but what that is or what it does is unclear. Dandy certainly doesn't know. Nor does he usually know that he's being chased—his own luck and limited attention span keep him one step ahead of the Empire's pursuit purely by chance.

Indeed, Dandy is the ultimate bachelor and the ultimate survivor, having died multiple times only to return for the next great adventure. He's been blown up, zombified, and flung billions of years into the future without hope of salvation. Yet somehow he always finds himself back aboard the Aloha Oe, hot on the trail of the next rare alien...after a stop at Boobies, of course. 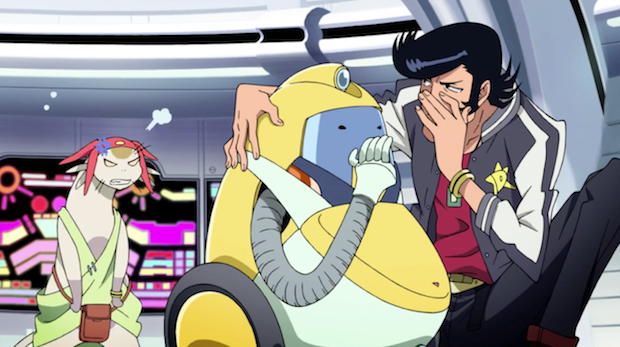 One of Dandy's crew, QT is a robot as adorable as his name implies. He serves the Aloha Oe as navigator, encyclopedia, janitor, cook, and just about anything else his captain is too lazy to do. As a chronic neat freak and hard worker, QT frequently scolds Dandy for his slovenly habits but is powerless to change them. He often finds himself the only sane man among the crew, generally bailing Dandy and Meow out of whatever trouble they've gotten themselves into. But like WALL-E aboard the Axiom, QT is woefully obsolete—his battery is unreliable at best, and his memory storage is so out of date that he frequently relies on books to get the data he needs. Even weirder, although he is a sentient AI, QT dispenses information in the form of 1950s-era punch cards. It's QT's job to watch the ship during missions and keep his crewmates on task; without him, the Aloha Oe would fall apart within hours. 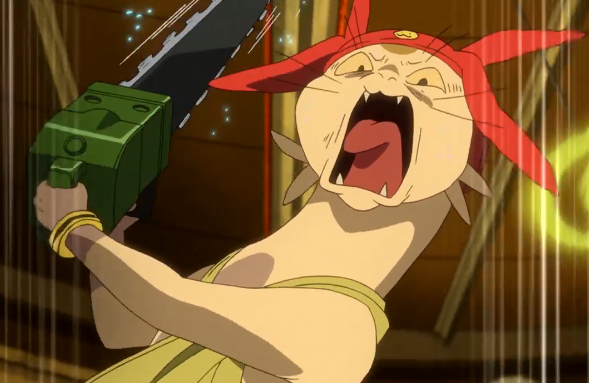 Dandy's other crewmate looks like a giant space cat, but don't let Meow hear you say that. He's actually a Betelgeusian, brought aboard the Aloha Oe after Dandy decides he's a rare alien and captures him. He isn't, of course. What he is is lazier and more perverted than even Dandy, content to take creepshots of Boobies waitresses and lay around the ship, eating and sleeping. Yet Meow—so called because his real name is unpronounceable—is a gifted spaceship engineer, with considerable knowledge of alien species and habits. Many an adventure has begun with one of Meow's tips and ended with either his death or capture. He's addicted to his phone—always in search of good reception, no matter the planet—and has a weakness for good food, both of which get him in trouble more often than not. 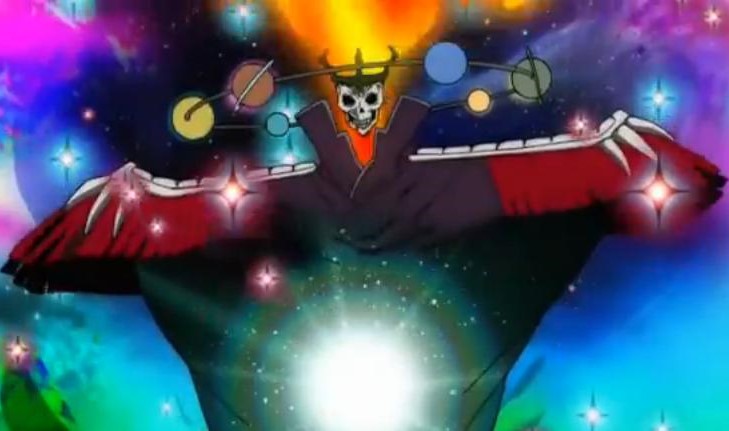 The fearsome leader of the Gogol Empire, Admiral Perry is a cloaked, flaming skeleton with a crown of planets. He rules half the universe and wages a constant, apocalyptic war with the Jaicro Empire to conquer the other half. Perry is a demanding and easily angered leader, willing to blow up trusted and valuable subordinates for the simplest of failures. His vanity borders on the supernatural, as he has the uncanny ability to tell when people are speaking ill of him. He's also extraordinarily cheap, constantly itemizing the cost of long-distance space calls to his lieutenants and willing to conquer entire planets simply to clear library fees. When he focuses on a goal, he will stop at nothing to obtain it with overwhelming force—and right now, that goal just happens to be the capture of Space Dandy. 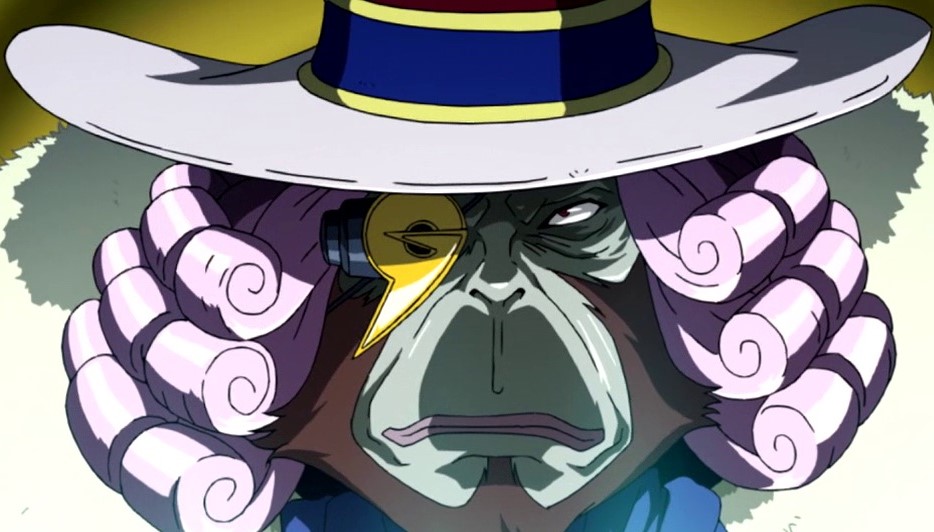 A snappily dressed gorilla in a curled wig and a top hat. But don't let his appearance deceive you—Dr. Gel is the greatest scientist in the entire Gogol Empire, and Admiral Perry's most trusted subject. He commands one of the Empire's powerful fleets from his flagship, which looks like the head of the Statue of Liberty with a ball gag. A loyal servant of the Empire, Gel spends his days pursuing Space Dandy, whose capture is supposedly the key to conquering the entire universe. Through a series of bizarre accidents, Dr. Gel has come to consider Dandy a formidable and cunning opponent, capable of summoning black holes and single-handedly defeating entire teams of mercenaries. In reality, Gel is possibly one of the unluckiest beings in the galaxy, constantly foiled by Dandy and rarely surviving the episodes he appears in. 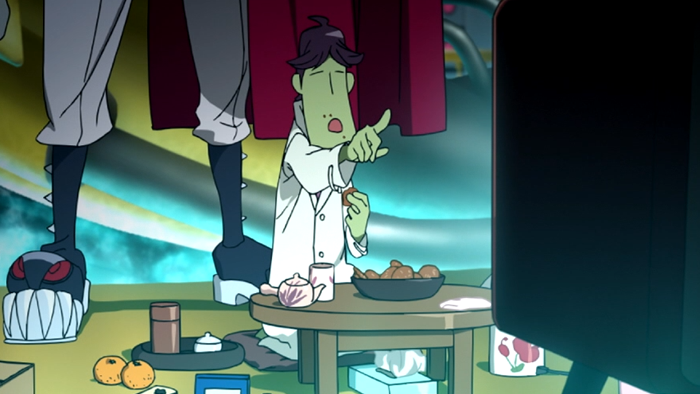 Dr. Gel's faithful, vegetable-looking assistant. Bea serves the same function on Gel's ship as QT does on the Aloha Oe, crunching the numbers and tracking down Dandy—usually by following Meow on space-Instagram. Though he fears Dr. Gel, Bea is a good employee...when he wants to be. When they're not hot on Dandy's trail, Bea can be quite lazy, preferring to watch TV in the bridge instead of searching for the Empire's number one target. He's also got a bit of a dishonest streak, and he isn't above buying cheap inventions and sprucing them up before presenting them to Gel as his own. 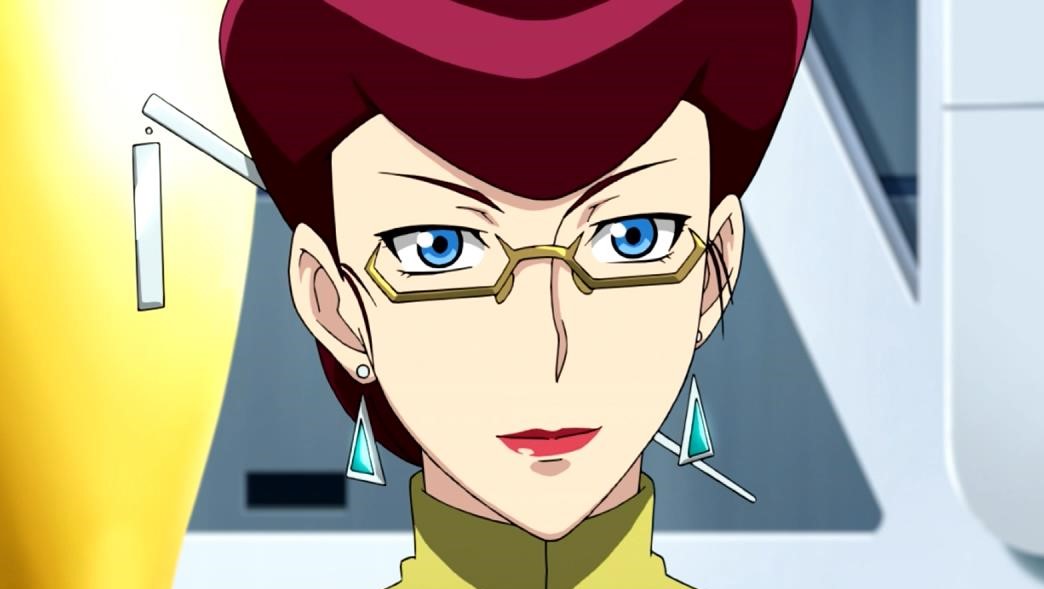 A long-suffering employee of the Space Alien Registration Center. Scarlet works as an inspector, tasked with assessing the rarity of Dandy's captured aliens. They're usually not worth her time or money. A strong case for the "hot librarian" look, Scarlet spends almost as much time being hit on by Dandy as she does processing his quarry. Off the clock, she enjoys visiting traditional ramen bars. She's also a powerful martial artist, able to single-handedly defeat Gogol Empire strike forces without messing up her hair. Though Dandy gets on her nerves, she does the thankless job of defending him from angry aliens when they happen to meet. He's not a particularly reliable client, which makes one wonder why she bothers. 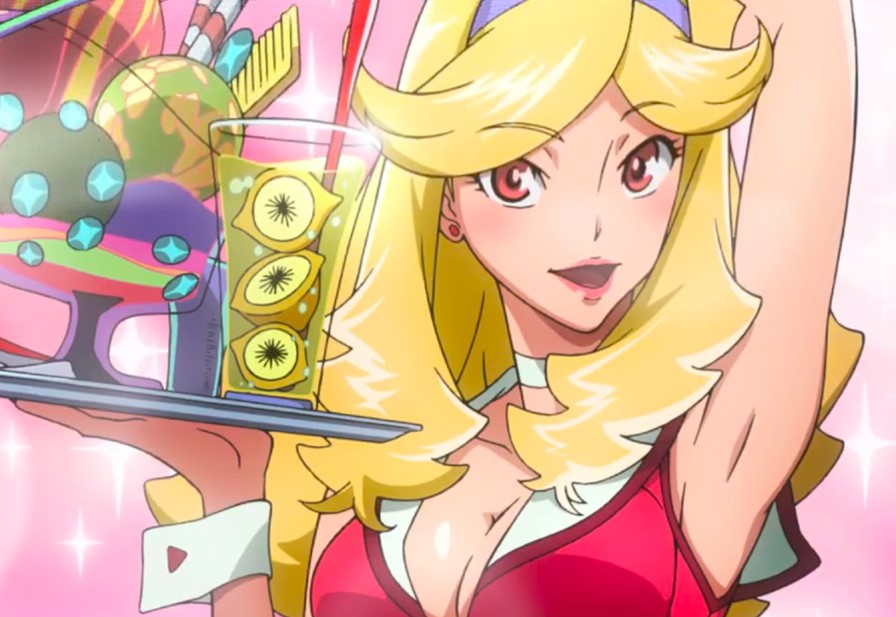 Dandy's favorite waitress at Boobies. Honey is blonde, buxom, and ditzy, quick with a smile and a drink...in other words, exactly Dandy's kind of woman. Although she appears to be an airhead, she's an avid racer when she's not working, able to outpace even the skilled Dandy. Honey also sends inadvertently witty burns Dandy's way from time to time, and it's possible that there's more to her than meets the wandering eye. 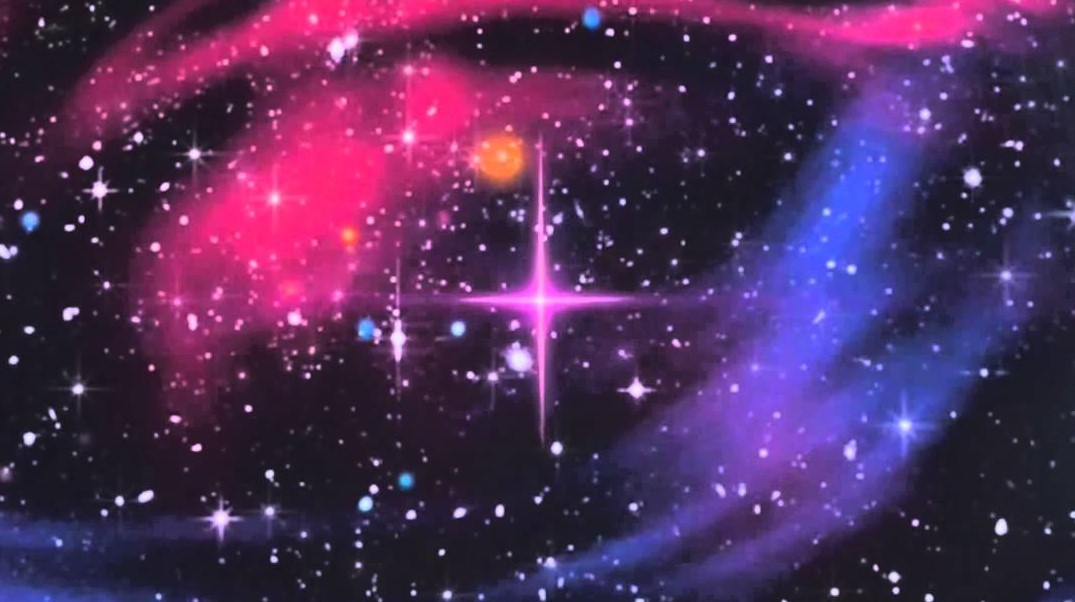 The mysterious voice that keeps a running commentary on Dandy's adventures. Although he speaks from a third person omniscient perspective, he's frequently disorganized and absentminded, given to glossing over or forgetting important details. He's rather selective about his narrative tastes, however, lingering on Boobies when the story passes through it. The Narrator also isn't above breaking the fourth wall, sometimes encouraging Dandy and his crew to stop lollygagging and move the episode forward.

The universe is full of surprises, from races of living plants to inter-dimensional ramen shops. Dandy's wanderlust and curiosity lead him across the stars, looking for rare aliens and leaving chaos and destruction in his wake. Just when he thinks he's seen it all, along comes someone or something new to confuse him, arouse him, or even kill him. But why is he so seemingly invincible? Is there someone pulling the strings, keeping him out of trouble? Whatever's going on behind the scenes, odds are that it's happening right under Dandy's nose. He may have even met his guardian angel already.

In To Love-Ru, Lala's marriage suitors are rather amusing villains. Let's look at their personalities and traits. They are villains, so they are serious, of course, and so they will show you how to deal with your troubles and enemies.

The crazy computer hacker known as Radical Edward is an enigma wrapped in a mystery. No one really knows what the young girl is thinking and what she will do. This is just a small look into the world that is Edward Wang Hwe Pepel Cybulski 4th.

Ghost in the Shell is an interesting look into a future when humanity has learned to seamlessly merge itself with technology. New advancements come with a whole list of new benefits and dangers. When those dangers appear, there's one agency that can take them down.