In this week's Prison School, the boys try to find a way to make their last day in prison productive, which involves butt wrestling, eryngii mushrooms and stabbing someone in the face. 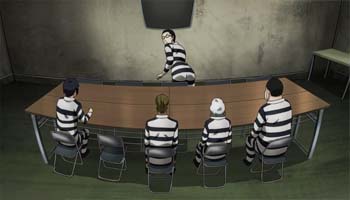 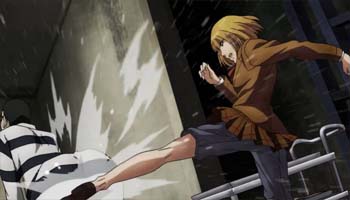 In this episode of Prison School, the inmates set out to find the DTO plan after successfully getting a one day delay for their expulsion. They're given just one day to pull off their crazy plan, and the Underground Student Council will make sure it doesn't happen. Gakuto's plan involves Andre challenging Meiko to a butt wrestling match, where two people bump asses to get the other person out of the ring. It's like Prison School's version of sumo wrestling, but only stupider and a lot more perverted. Kiyoshi thanking Meiko in the previous episode certainly planted doubt in the Underground Student Council, but Mari is quick-witted enough to understand she needed to do something about it. Replacing Meiko with Hana immediately ruin Gakuto's plan, since the operation hinges on Meiko and her butt. Kiyoshi has to act fast, and he decides to play his last remaining card. The one story arc the show has been beautifully building, aside from the boys surviving prison school, is the unusual relationship between Hana and Kiyoshi. Hana has a grudge against Kiyoshi ever since he saw her pee, and the show has slowly been complicating this story whenever Hana tries to get her revenge. Gakuto's plan involves unlocking the door to the correction office, where Chiyo is waiting to enter and search the computer for the DTO email, and it's ruined when Hana took guard duty. Kiyoshi figured out a way to enter the office, and it involves provoking Hana into getting her revenge. 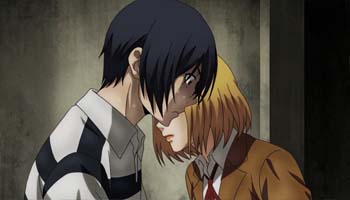 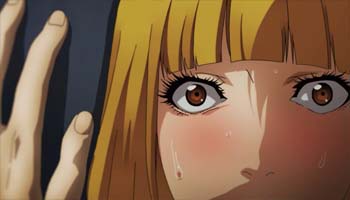 While the story arc about the inmates being setup by the Underground Student Council is slowly building to a climax, the one about Hana and Kiyoshi reached its peak. Kiyoshi and Hana are left alone inside the correction office, and she immediately ordered him to pee on a bottle for her. The last time she ordered him to pee, it slowly spiraled out of control where she ended up pants-less under a bed with him poking her from behind. It was a golden moment, but this episode easily topped it. Kiyoshi took his pants off to intimidate Hana, but she answered back by taking her pants off as well. In a weird mental chess game trying to outdo each other, the situation slowly escalates. The moment is full of juvenile perversion, as Kiyoshi and Hana's chemistry make the scene entertaining, and it ultimately ended with Hana kissing Kiyoshi. It's an unusual way for her to gain victory, since she just can't get him to pee without her losing face. She knows Kiyoshi likes Chiyo though, so stealing his first kiss is a victory for her. This situation is bad for Kiyoshi, because Chiyo just happens to be outside the room waiting for him to unlock the door. 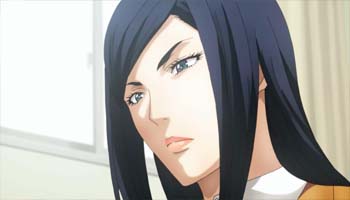 It looks like the stage for the final episode is prepped up for this episode, and all the important characters finally assume their roles in it. Chiyo takes a part in this story arc, since she has a vital role in Gakuto's plan. It seems that she'll be the one looking for the proof that DTO exists, but Mari won't go down without a fight. The mental chess game finally commences smoothly in this episode, because the two camps are pitting their plans against each other. Gakuto's plan involves Meiko, but Mari sends Hana to replace her. Gakuto has Chiyo sneaking in the prison school, but Mari sends Meiko to guard the outside specifically looking for intruders. Gakuto sets his plan at the night before their expulsion, but Mari instinctively knew the boys will plan something on the same night. It's heading for a really exciting climax for the final episode, since Mari might still have some more surprises waiting for the inmates. 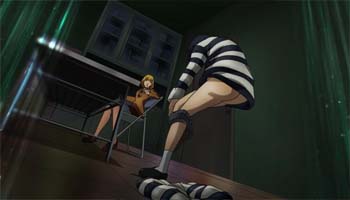 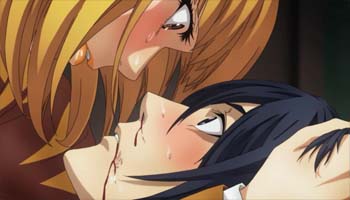 Hana is on the spotlight for this episode, and her relationship with Kiyoshi finally blossoms in a weird way. It's no surprise that she ended up embarrassing herself in front of Kiyoshi, but kissing him certainly made the moment a lot more special. She claims it's a cruel way to get one over Kiyoshi, since she stole his first kiss but the moment proves otherwise. She fell to the floor crying, after realizing Kiyoshi is the first guy to ever go as far as seeing her pants-less, and her kiss seems more like a declaration than an act of revenge. It just means that a love triangle is clearly underway, and that's the best part about it. Hana is interesting though because she's hard to read, unlike the rest of the Underground Student Council. Despite her devotion to Mari, Meiko is really warming up to the inmates while Mari clearly hates them, because of the sleazy men in her life. Hana is different, because she flirts with Kiyoshi but also clearly doesn't like the inmates. She's the one in the middle, and her playful attitude makes the story a lot more exciting to watch. Anticipating which side wins her over adds some intrigue to an already exciting story.

Predictions for the Final Episode

The night before the expulsion might be a nail biter, since it's in Chiyo's hand now. The situation is dire for her, because Hana is on top of Kiyoshi in the room she is about to enter and Meiko is roaming the school grounds ready to catch her. Mari might even appear and try to stop Chiyo herself, giving us a wonderful sister against sister moment.

Gakuto's plan will succeed, but Mari might already have a way to refute the authenticity of the DTO plan, and the inmates might still have to crawl their way out of their expulsion.