In many ways, this was the Diamond no Ace episode that we've been building up to for eight cours - and it sure didn't disappoint. 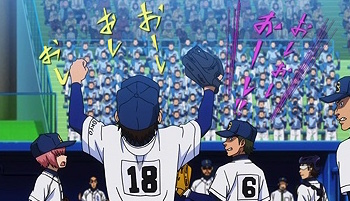 Our little boya are growing up right before our eyes...

Two of them, anyway. Thankfully for continuity's sake, Furuya is still an infantile douchebag. 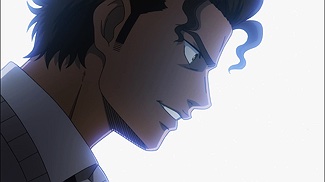 If you heaped up everything that was awesome about the first eight cours of Daiya no A on a plate, you'd get this episode, pretty much. What a sweet reward it is to see Eijun truly grow, truly establish himself as a legitimate ace, and bask in the well-earned accolades of... well - everyone (except one person, of course). There were no dark clouds hiding behind the silver linings, no bitter with the sweet - it was just glorious success of the kind only a good sports anime can provide. I know Eijun is going to go through more dark times, but no one can take this away from him. 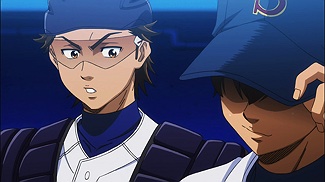 We have a fight on our hands for that #1 jersey now, that's for damn sure. Eijun may not have Furuya's raw power, but he brings much to the table. He's efficient (he was at 56 pitches in the 6th inning of this game), and that efficiency has allowed him to throw two complete games (though one was shortened by the 10-run rule) in far fewer starts than it's taken for Furuya to throw... zero. He pitches fast, and keeps his teammates in the game. And most importantly, he has a positive impact on everyone around him - the team, the coaches, the fans. He's a team guy who lives and dies with the team, and everyone around him can see that. 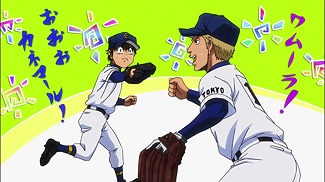 I'm not going to harp overlong on Furuya's douchiness on what's otherwise a great day for Diamond no Ace, but it's just so telling that the better Eijun pitches, the more pissed off Furuya gets. This is a huge game for Seidou, but Furuya would be happier seeing Eijun knocked around like a piñata. It shouldn't be pretended that this kind of selfishness isn't a big deal, because it is - especially when we're talking about young kids in high school. Furuya makes those around him worse, and Eijun makes those around him better. Furuya is damn talented, but he better be because his life is a self-fulfilling prophecy. He gets exactly what he seems to want - he has to do everything on his own. 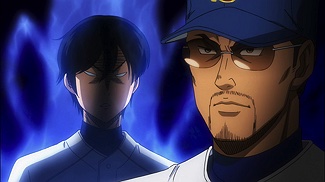 Furuya is the only one in a Seidou uniform not ecstatic over what's happening on the field. The crucial moment comes when Miyuki shows trust in Eijun and puts down two fingers in the bottom of the sixth, and it's a good thing - Ouya is starting to get the timing down on Ejun's four-seamer and moving fastball. When Eijun finally lets that circle change go he knows just how big a moment it is - a game-changer in the literal and figurative sense. He's truly a different pitcher after that, a different person - someone who knows he's a badass, and there's nothing the opponent can do about it. 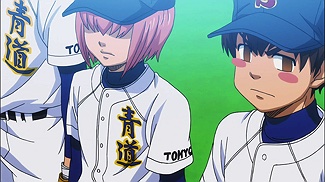 This is an Eijun we just haven't seen before - not just getting guys out, but dominating. He strikes out the side in the seventh, a first for him. And it must be said, it was Ochiai's advice that did it - he pushed Eijun to become a better pitcher when no one else had been able to do it. Of course, Ochiai is also proved dead-wrong in his dismissal of Haruichi. That home run had to feel really, really good - it always does when the little guys hit them, but the circumstances here made it that much sweeter when the crack of the wooden bat (baseball as the Gods intended) rang out through Meiji Jingu Stadium. 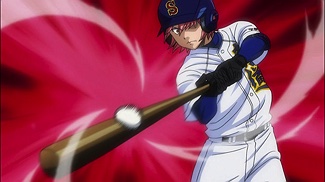 Haruichi's dinger was awesome, but I think my favorite moment came after the 7th, when Eijun and the Seidou cheering section turned "Yosh! Yosh! Yosh!" into a round. That summed up the impact the lovable idiot has had on his team perfectly - and knowing just how much it had to make Furuya seethe was all the better. It's also pretty great that Chris-sempai was in the stands watching every pitch (which I don't think Eijun knows yet). The Sensen coach is in attendance too, and he too can see the impact the first-year southpaw has had on Seidou. It's pretty clear they're going to be the next opponent - the big question is who's going to be standing on the mound facing Maki in that semifinal showdown.