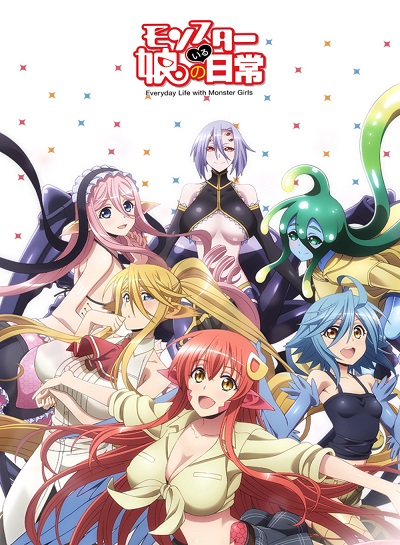 Monster Musume no Iru Nichijo (Everyday Life with Monster Girls) is a delightful anime series about monsters inhabiting our everyday world. The government has set up the Interspecies Cultural Exchange Act to integrate monsters into the human world. A young man named Kimihito Kurusu finds himself recruited to take in a lamia, a half-snake, half-human creature, named Miia. Soon they’re joined by several other young, attractive monsters. Can Kimihito resist the appeal of these sexy monsters?

Director Tatsuya Yoshihara is a young director with a number of titles to his credit already. He is also known for his work on Muromi-san and Yatterman Night.

You’re already into the second half of the first season. How is the response so far?

Yoshihara: Monster Musume is part of a broad genre, which includes everything from full-body monsters to girls with monster ears and tails. The monsters in Monster Musume are half-human, putting it on the light end of the monster spectrum. The story is also light, a love comedy, which makes it easy to get into. I’ve been happy to see that many fans who have never paid much attention to the monster genre are enjoying Monster Musume. Fans of the original manga have also responded positively.

In the 4th episode, the Slime creature Suu makes an appearance. It’s amazing how you were able to show her as transparent.

Yoshihara: You can see right through her. In order to make a character transparent, you have to show the background behind her that would ordinarily be covered by her body. That was one of the hardest parts to animate. Suu’s not very detailed, so she’s a bit simpler to draw than the other girls, but it’s hard to integrate the transparent and non-transparent parts of her in the scene. I have to leave that to the Director of Photography, Kazuyoshi Shiomi.

You put a lot of effort into the details, even the coloring of characters’ pupils.

Yoshihara: The complex pupil coloring is the work of our character designer, Takaya Sunagawa, along with Director of Photography Shiomi. Sunagawa has the ability to picture the final product right from the beginning. He and Shiomi get together to hash out every detail of the production. Shiomi adds modern touches like gradation of the skin under characters’ bangs to create transparency. I didn’t even realize it was possible to do some of the things he does until I see them in the finished product. 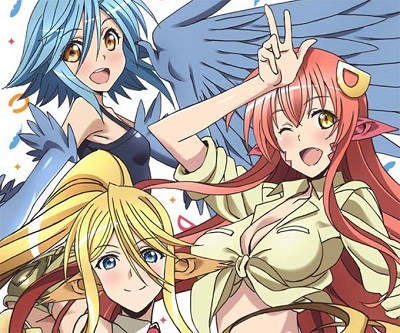 In the 4th episode where Suu debuts, during the water gun fight scene, why did you make even the little girl’s clothes get soaked and see-through?

Yoshihara: That’s the second time that girl appears. The first time is the second episode, where she’s wearing a hat and sitting in a tree crying. You’re right! We showed her on purpose. We wanted people to ask, “Why did they show her!?” She’ll appear in the last episode too, so keep an eye out for her.

One of the scenes I just couldn’t look away from was the scene from the first episode in the Kurusu family’s dining room.

Yoshihara: That’s the scene when Miia chases after Kimihito with her shirt pulled up and her skirt falling down, right? We took great care with her skin tone in that scene. I thought it was almost too risqué. But we managed to get away with it, and the scene was broadcast as-is.

In the second episode, Papi takes off her clothes and jumps into a fountain. Kimihito conceals her pretty well, but the scene cuts off right when you’re about to be able to see everything. It was…a little disappointing!

Yoshihara: If you move the character cell for that scene just a little bit, you can see it all. It’s something to look forward to on the Blue Ray and DVD release.

Are there any other scenes that you’re particularly proud of?

Yoshihara: The scene with Miia in part B of the 3rd episode. After Ms. Smith announces that Kimihito will have to marry one of the monster girls, Miia comes into his bedroom as he is agonizing over it. I love the charm of Miia’s bewitching aura in that scene. 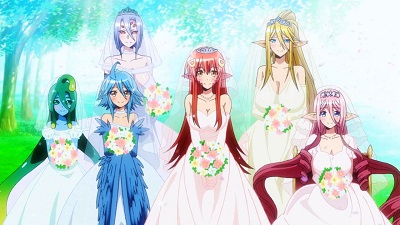 When is MON (Monster Ops Neutralization team) going to make an appearance?

Yoshihara: In the 7th episode. Manako and Tio will show up as part of the special ops team. They have a bit of a different image from Miia, Papi, and the rest, but in later episodes they will be just cute monster girls, like the others. They only take on that professional air when Ms. Smith has a job for them. Somewhere down the line there will be an episode where Kimihito goes on date-like outings with some of the members of MON, so you can look forward to that.

Rachnera shows up by the 6th episode, doesn’t she?

Yoshihara: Rachnera is going to take over the job of mediating and keeping everyone together from Cerea. In order to make that happen, Cerea’s love story is going to speed up a bit. Rachnera’s a very dependable character who supports the others from the shadows, and wraps up the story neatly.

The 6th episode will have a few other big events, such as Miia shedding her skin, and Papi laying eggs, right?

Yoshihara: God only knows how much of the episode we will be allowed to broadcast, but it will definitely be a treat for the ears.

A treat for the ears?

Yoshihara: Miia’s sultry voice as Kimihito peels off her skin, and Papi’s voice and expression as Kimihito holds her up when she lays her eggs will be intense. Your senses of both hearing and sight will be delighted.

I can’t wait to see what comes next!

Yoshihara: By the 7th episode all the principle monster girls will have appeared, so I will be making sure that the spotlight shines on each of them equally. I’ll be glad if you enjoy seeing your favorite monster girl make an appearance, but to be perfectly honest I hope you like all the monster girls. Keep watching! 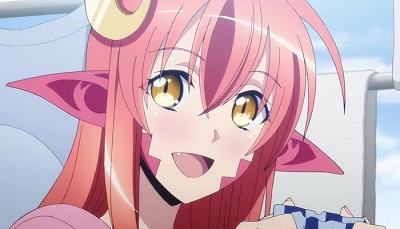 As the first monster girl to arrive at the Kurusu household, and the first to fall in love with Kimihito, Miia has a good case for becoming his wife. During explanations of the Interspecies Cultural Exchange Act for the other girls, Miia’s jealousy when she exclaims, “The first exchange student in the house is in charge!” is adorable. She looks good in glasses.

Yoshihara: Miia gets jealous really easily, but that’s just a mark of how much she loves Kimihito. You can really understand her feelings in the 5th episode when Kimihito carries Mero in his arms. Miia dreams of being carried like that across the threshold, but Mero gets it first. Miia’s disappointed face is too cute. 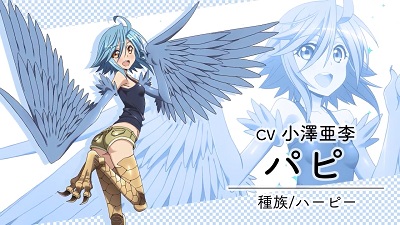 To get a feel for the innocent yet seductive harpy Papi, I recommend the first half of the 2nd episode. When Papi squats down to suck on an ice pop offered by Kimihito, she absolutely looks like jailbait. The camera angle showing her behind is a fan favorite!

Yoshihara: Papi is the most innocent of the monster girls, but her naïve optimism acts as a foil to keep things light. In the 4th episode when Suu appears and Kimihito and the others discuss what to do with her, the mood of their serious discussion is lightened by Papi playing a game with Suu in the background. Papi’s at her best when she’s happily running all over the place. 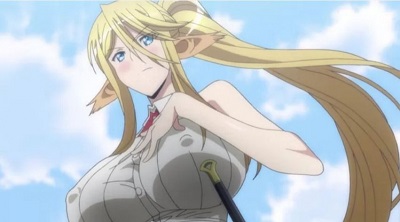 Cerea’s appeal is not just in her chest! Get to know the girly Cerea in the first half of the 3rd episode. When Kimihito asks her if there is anything she would like to do, she responds, “I want to hold your hand.” Her blushing cheeks and sultry eyes make Cerea someone you want to put in your pocket and take home.

Yoshihara: Cerea’s the peacemaker until the 5th episode, but when Rachnera comes on the scene, she turns into more of a happy-go-lucky soul. This is so you can enjoy her cute blushing face more often. Down the line there will be an episode where Cerea gets self-reflective and worries that she’s not useful to Kimihito as anything but a sword. It’s very sweet, so you won’t want to miss it! 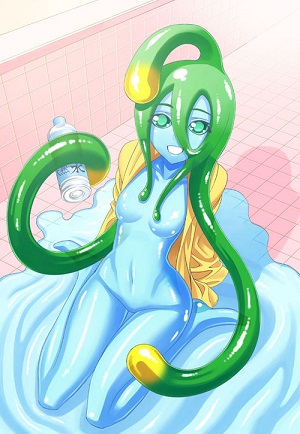 She’s cute in the form of a young girl, but in her debut scene in the 4th episode, and in the 5th episode when she gets crammed into a bucket, her water-balloon-like shape is adorable! In the second half of the 4th episode, when her locks of hair are sucking up water from the river, her voice and her shape are too cute to miss.

Yoshihara: Suu doesn’t talk much, and doesn’t do anything noteworthy, but she has the appeal of a cherished pet. Even Papi, the most childlike of the monster girls that have debuted by the 3rd episode, wants to take care of Suu. In the 6th episode she starts to display the traits of a helpful character, but this doesn’t really come to fruition until the last episode. You might see a whole different side to Suu then. 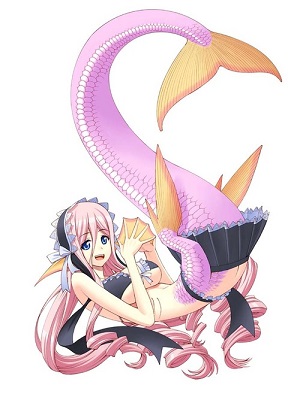 From her debut in the 5th episode until the last, Mero never loses her graceful expression. But as a lover of tragic romance, Miia’s situation gets her so excited that she grabs Miia’s chest without thinking. Another secret of Mero’s charm is her carefree expression when she casts off her high-born ways. 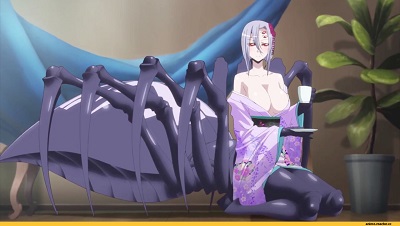 Rachnera, whose lower body is a spider, often wears a sleeveless top that showcases the lower half of her chest, a point that draws your eyes to her. This chest, and her beautiful legs encased in a shell, render Kimihito speechless the first time he meets her. If even the gentlemanly Kimihito can’t resist her charms, we can’t wait to meet her!

Yoshihara: In the 6th episode, Rachnera will take over as peacemaker of the group from Cerea. An adult both in age and in style and behavior, her maturity is part of her appeal. She’s not part of the background, but she does provide support for Miia and the other girls. She’s a very dependable older sister. 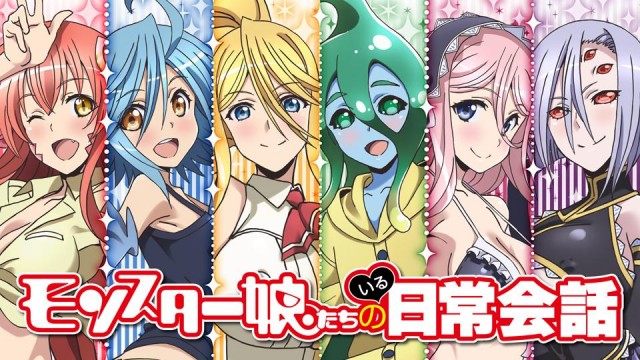 Who's your favorite monster girl?