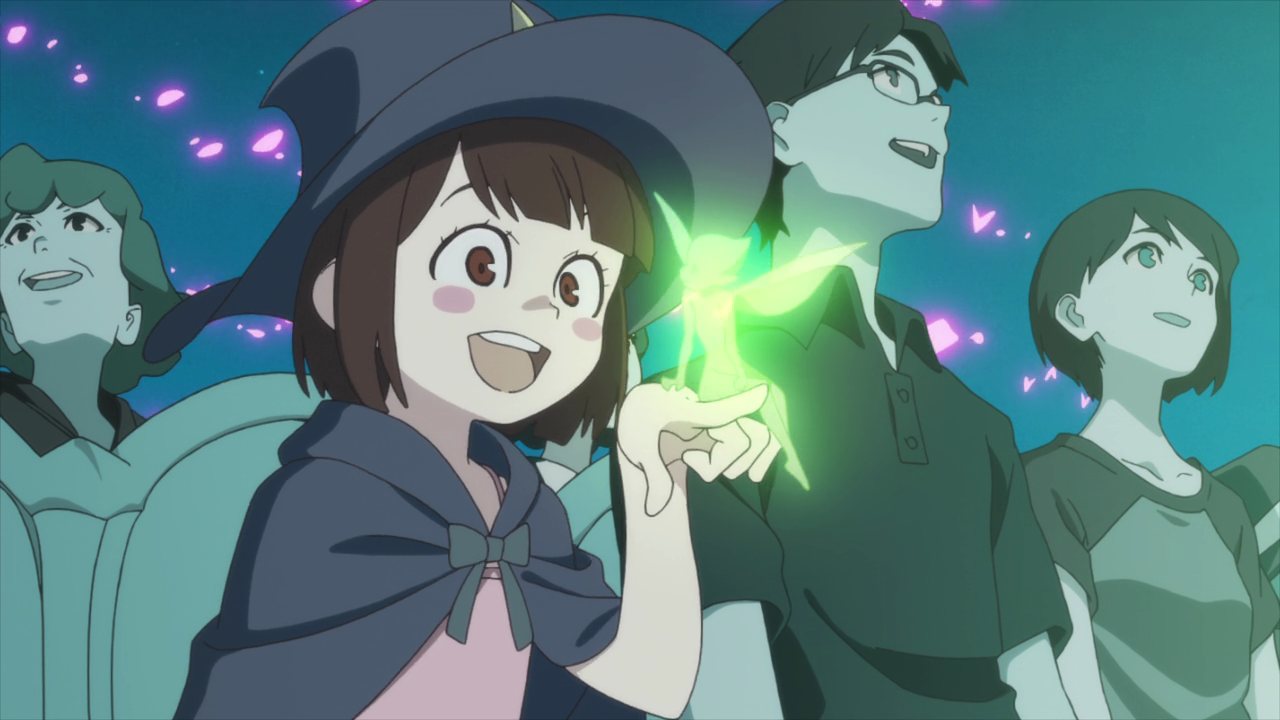 A major theme of Little Witch Academia is the power of confidence and perseverance. But cooperation is just as important, if not more so. Everyone learns and grows differently and has a diverse set of skills. At Luna Nova Magical Academy, witches from all around the world combine a passion for magic with different methods of bringing it to life. Here's who we know so far and what they're capable of. 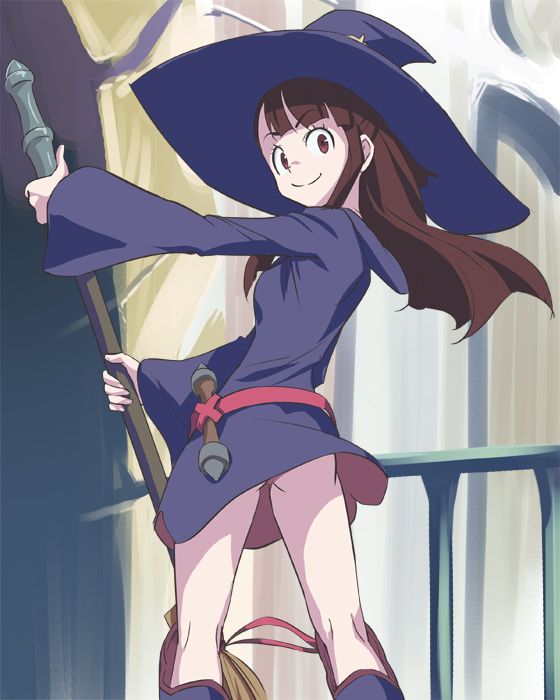 A mortal girl from Japan who dreams of one day becoming a powerful witch, and attends Luna Nova Magical Academy to learn the craft. She doesn't come from a magical family, but has already made two close friends at Luna Nova in Lotte and Sucy, who balance out her rash tendencies. Though she is easily bored and frustrated, she strives to prove her worth in the magical world. The problem is that she's impatient and barely capable of paying attention in her classes. Akko has passion but little restraint, preferring to get out and do things rather than just learn about them. Her stubbornness gets her into trouble, but ensures that she never gives up in the face of a challenge.

From a storytelling perspective, Akko is an excellent surrogate for the audience. We first encounter her as a little girl at a magic show put on by her hero, the witch Shiny Chariot. The first time Studio Trigger shows us magic, it's in the context of fireworks and fairies, bombastic and enchanting, and the intent is simply wonder—exactly what Akko feels. Her experience at Luna Nova Magical Academy subsequently breaks down both her impressions and the audience's, as magic is revealed to be just as much theory and study as anything else.

School is all the more frustrating for her as a mortal. Without any natural magical talent, Akko lags behind the other girls in flying and spells, simply because it's not in her blood or her culture. Akko's childhood hero is considered a fraud by everyone around her, but she clings to Shiny Chariot and her original experience because it's what she wants to be capable of one day. Although she struggles in her History of Magic classes, Akko literally burns with excitement for a field test in the school's labyrinth; for her, magic is all about action, power, and solving problems. Though she has some serious phobias—flying on a broom, for example—she doesn't let the thought of failure slow her down. As she says, how can she expect to be a great witch if she can't even fly?

That determination ends up saving her life when push comes to shove, combined with quick reflexes and an eye for solutions, as she saves the school from a magic-eating dragon in the same way that Shiny Chariot pulls of the finale of her show. Yet her victory raises even more questions: why is Shiny Chariot's prized magical item buried in the labyrinth? How is Akko able to use it? What does this say about the nature of magic?

We can only guess: as is mentioned in Akko's History of Magic class, a witch's magic needs an energy source to function; in the school's case it's the mystical Sorcerer Stone. And though everyone but Akko is implied to have some inborn affinity for magic, is that really the case? Were they simply exposed to more of it growing up? Perhaps it really is as Shiny Chariot says: "Believing is magic!" 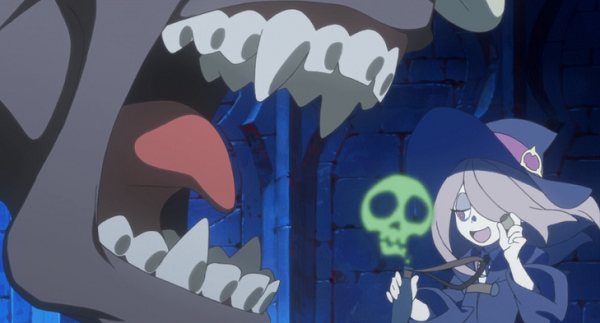 Hailing from the Philippines (her last name is based on the Cebuano word for "dark sorcerer"), Sucy is Akko's other close companion at Luna Nova. She is blunt where Lotte is soft, given to teasing her friends and bringing them down to earth when they get out of control (mostly Akko). Though outspoken, Sucy has a dark, sickly demeanor that matches her knack for potions. Indeed, her first appearance involves her performing a scientific experiment on Akko—implied to be one of many. Though she appears reserved, she has a devious streak to her, particularly where her experimental potions are concerned. The girls' encounter with a minotaur below the school is a particularly entertaining and disturbing example of Sucy in her element. Despite her quirks, Sucy is a steadfast friend of Akko and doesn't hesitate to rush to her defense when danger threatens. 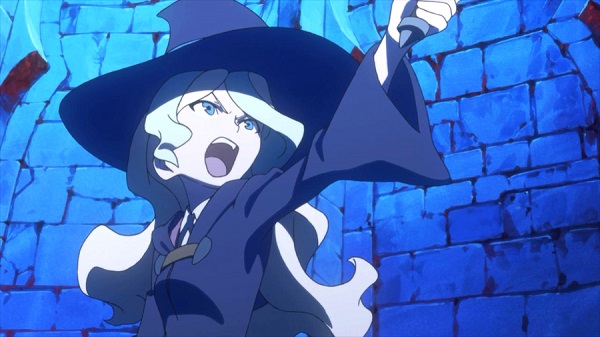 Akko's chief rival at Luna Nova. Though she may give off a Draco Malfoy sort of vibe, Diana isn't nearly as malicious or petty as she might seem. What she is is proud: proud of her heritage and her drive to succeed, and rightly so. To her Akko is nothing more than a child who has no idea what she's gotten herself into, and she isn't afraid to say so. Her pride is an occasional weakness, as it is her desire to be the very best that sets a powerful dragon loose in the school. Diana doesn't let her personal dislike for anyone get in the way of her duty, though; she takes an active role in protecting the other students during the dragon's rampage, and rescues Akko as the battle comes to an end. She may be haughty, but she's willing to set aside her own feelings for the sake of others—something Akko has yet to learn to do—and hides a more compassionate side beneath her power. 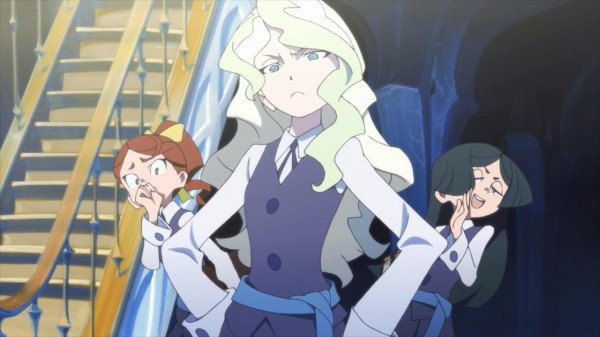 Diana's companions and minions. They latch on to her strong personality and demonstrated ability, and join her in mocking Akko for her misguided ambition. They are less mature than Diana, though, insulting Akko and friends while their leader stays silent. Hannah and Barbara are quick to assert their own strength over others, teaming up to torment a weak-looking lizard they find hiding in the labyrinth. Their overconfidence starts something they can't stop, however, and as is frequently the case they are forced to turn to Diana for help. 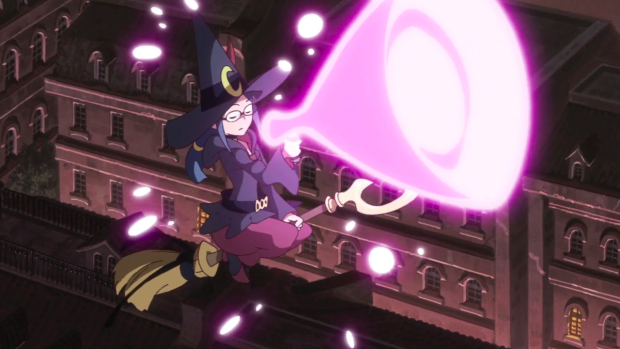 One of the teachers at Luna Nova. Ursula appears to teach practical applications of magic, and oversees a class expedition into the labyrinth beneath the school. Though not as flashy as Shiny Chariot, she is the true embodiment of what Akko aspires to be: knowledgeable and resourceful, as well as powerful. She recognizes the dragon and its weaknesses immediately, and coordinates the evacuation of the labyrinth and the battle against it. She places a great deal of trust in her students, as when she directs them to save the Sorcerer Stone while she distracts the dragon, and expects nothing but the best from them. 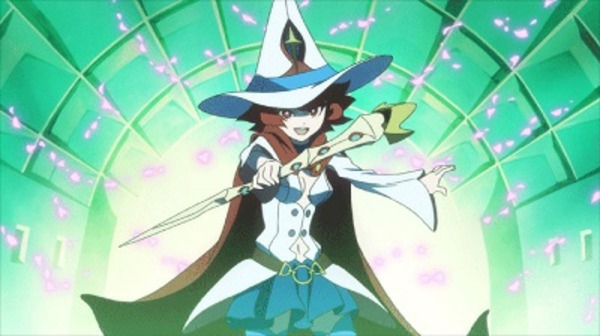 A celebrity in the world of mortals, known for her flashy magic shows and positive messages of determination. She wields the Shiny Rod, a magical weapon powered by crystals known as the Seven Stars. Though its origin is as yet unknown, it allows the user to cast Shiny Arc, a spell capable of destroying fearsome monsters.

Although she uses magic to inspire and entertain, Shiny Chariot is scorned by the magical community for using her powers frivolously. She has not been seen in several years, and her disappearance has only inspired Akko to one day outshine her. 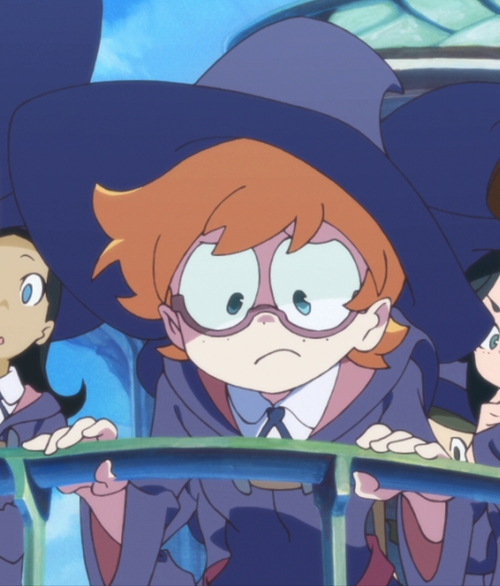 A Finnish witch who is one of Akko's close friends and roommates. Lotte is quiet and bookish, in stark contrast to Akko's exuberance. She possesses all the study skills her friend does not, as well as a sense of honesty and responsibility that sometimes frustrates Akko. True to her shyness, Lotte tries to be diplomatic and understanding, in contrast to Sucy's bluntness. She also finds History of Magic genuinely interesting, which saves the school when they're racing to defend the Sorcerer Stone from a magic-resistant dragon. Although Lotte doesn't get much of an opportunity to shine in this first episode, the second short, Enchanted Parade, reveals her to be deeply connected to her home and her heritage—as well as outright terrifying when something dear to her is threatened. That protective nature, hidden by her timidity, will doubtless come in handy in future adventures.

As it stands, Little Witch Academia is a small world, but it's fun to speculate on who else we might meet and what might happen. As Akko's History of Magic teacher says: "Those who use magic only for themselves will eventually be destroyed by magic." That's certainly true of the dragon that Akko fights, which eats magic and is destroyed by Shiny Arc. But who else might that maxim describe? Does it perhaps refer to Akko's ambition, and foreshadow an opportunity to become all-powerful at another's expense? Who is this world's Voldemort? Hopefully Studio Trigger will move ahead with a show and give us more: a bigger cast, a terrifying villain, and a thrilling story.

Meet the Agriculture Students of Gin no Saji

Gin no Saji (Silver Spoon) is a rare anime and in a class of its own. Despite nestling into the very crowded slice of life genre, this anime focuses on the unusual yet interesting world of Japan’s agricultural high schools. The characters within are as full of life as the animals they care for!