Shinichi is a regular senior high-school student, who had the bad luck of being infected with a nasty parasyte, Migi. Parasytes are organisms who have the ability to morph into anything from tentacles to blades, but to survive they require a human body to handle body functions. They can only infect one body part, by default they target the head to gain full control over the victim's body.

All parasytes apart from Migi and Joe, who feed off their host's blood, have an irresistible craving for human flesh, devouring people is in their nature. Who can fight these creatures? The best candidate is a human-parasyte hybrid, Shinichi . Kiseijuu is based on the conflict between Shinchi and the parasytes. During many of his fights, Shinichi is close to losing his life. Despite great difficulty and casualties, Shinichi wins all his fights, even the one against Gotou, an amalgamation of five parasytes. Once the parasyte threat is eliminated, Shinichi goes to college and Migi becomes dormant.

When I saw the first episode of Kiseijuu: Sei No Kakuritsu(or Parasyte in english), I had a flashback of the 1954 movie The Invasion of the Body Snatchers. The anime and the movie are similar to a certain extent in that they both show aliens taking over human society from the inside. But while in the movie the aliens' tactic is to duplicate humans and discard the original bodies, in the anime they infect and take over the bodies of unsuspecting victims. In both movies, the new beings are void of emotion. They explore two different movie themes, cloning in the first and possession in the second.

The theme of possession exists in most mythologies: Christianity, Buddhism, Haitian Voodoo, Wicca, Hinduism, Islam, and many more. Possession is when a supernatural being takes over the unwilling bodies of victims or even inanimate objects. In mainstream cinema, it is found in the form of spiritual possession in movies such as The Exorcist, or biological possession as was the case with the Goa'uld, a parasitic snake-like race that takes over the bodies of humans, in the Stargate SG-1 series. Kiseijuu is a variant of biological possession. Usually, this theme works well in horror, fantasy, and even Sci-Fi genres.

Like most anime, Kiseijuu began as a manga which ran from 1988 to 1995. By the time Madhouse decided to make the anime adaption, nineteen years had passed since the last issue of the manga and a new century had come around. With it came new fashion, new technology, as well as different social attitudes. For the studio to change Kiseijuu to better match the present, it had to alter the clothing, bring in new technology and adapt the social climate. The characters trade land lines for smart phones, and newspapers for tablets. However, overall, the source material has been kept unaltered, and the transition has been smooth. All of the visceral carnage geared towards the parasytes has been left intact. 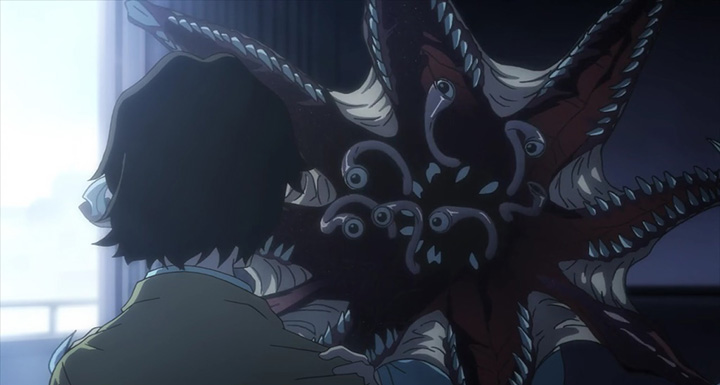 My mind was blown straight out of my head when I first saw Kiseiju. What’s intriguing is the sheer amount of gore we get to see. The anime boasts some impressive battles ending in pools of blood. The parasytes themselves are often without skin, so you can stare in awe as their muscles flex in front of you. I can’t remember watching another anime where a head could morph into tentacles, blades, even wings. Hitoshi Iwaaki, the creator of Kiseiju, stated in an interview that he felt like he was playing with modeling clay when he came up with the concept of morphing parasytes. 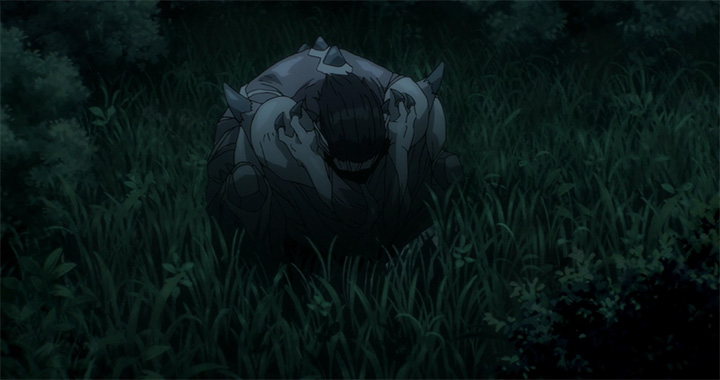 The anime’s symbolism sets it apart from other possession-related films and anime. Parasytes are regarded as evil beings, but they can be interpreted as “spirits of nature” who are just trying to bring balance to the planet by eliminating humans. All parasytes instinctively target humans, the first scene from the anime illustrating this clearly. Without these deadly protectors, nature itself is helpless in the face of human destruction. Reiko Tamura reveals that she was able to survive by eating human food, which is proof that parasytes consume humans out of instinct and pleasure, not necessity. There is hope for co-existence between humans and parasytes.

Pupa, like Kiseijuu has cannibalism. Due to an infection from the Pupa virus Yume Hasegawas develops an irresistible craving for human flesh, her brother is infected as well gaining Wolverine class regenerating abilities becoming his sister's ideal meal. These two siblings are a match made in Hell. Pupa has an original animation style similar to watercolor and an episode lasts for just four minutes, making it possible to watch the entire series in less than an hour. There’s enough rampage to satisfy any horror fan.

In Tokyo Ghoul, humans are taken down from the top of the food chain and replaced by powerful ghouls, who can only digest human flesh. The story is centered on Ken’s life as a human-ghoul hybrid, his struggles with cannibalism, his new social setting and his new status as an apex predator. Tokyo Ghoul manages to keep you alert at all times, and to constantly redefine the concept of "survival of the fittest." It made me wonder, who is allowed to live and who is meant to die? There isn’t a straight answer to this question, ghouls keep human numbers in check, but then if humans went extinct, ghouls would be left without their food source. 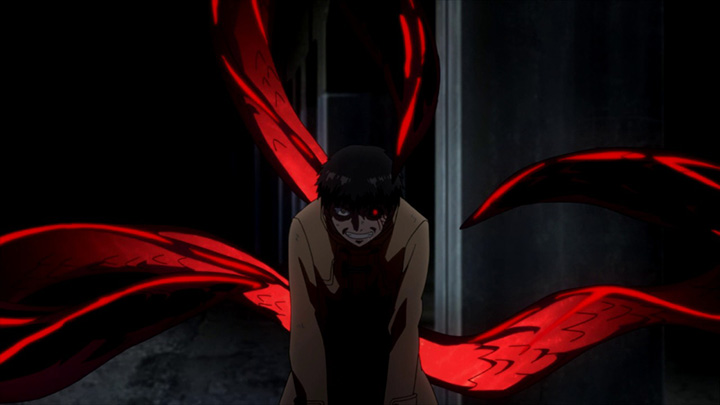 Who Should Watch Kiseijuu: Sei No Kakuritsu

Kiseijuu will satisfy all fans of the horror genre. If you like getting shocked with visual stimulation, if the crimson color of blood is something you enjoy seeing often on screen, then you should definitely watch this anime. However, Kiseijuu is not just any hack and slash anime, it shows us the power of friendship, how two very different individuals can co-exist. It demonstrates the power of change, initially Migi showed no attachment towards Shinichi, but eventually the two formed a close bond. If you enjoy watching an anime that is more than skin deep, Kiseijuu: Sei No Kakuritsu is definitely for you.