To Love-Ru is a slice of life anime that was produced by XEBEC and directed by Takao Kato and Yūichi Oka(opening and ending), having aired in Japan between April 3, 2008 and September 25, 2008, and featuring 26 episodes based around approximately the first 100 chapters of the manga series. The original creators Kentaro Yabuki (art), who created Black Cat and made Mayoi Neko Overrun as an adaptation of the light novel of the same name, and Saki Hasemi (story) conceived the To Love-Ru manga on some long night somewhere in Japan, which was later birthed after being serialized in the popular Weekly Shōnen Jump magazine on April 24, 2006 and grew there in size and popularity until August 31, 2009, with the chapters being consolidated and published by Shueisha publishing company into 18 tankōbon(a book that is complete in itself) volumes. To Love-Ru then went on to be serialized in Jump Square magazine as the sequel To Love-Ru Darkness on October 4, 2010 to become quite a "bootylicious" brainchild, with there being more adapted anime sequels: To Love-Ru Darkness, and To Love-Ru Darkness 2nd, including OVAs. The opening theme song of To Love-Ru is "forever we can make it!" by THYME, and the two ending theme songs used separately are" Lucky Tune" by Anna and "Kiss no Yukue," also by Anna. And there is music by Takeshi Watanabe.
The series was always generally well-received and has always had a nice rank in the magazines, with criticism coming from how the anime series did the usual to fit full sections of the manga in a specific timeline by cutting off some parts that are deemed unnecessary for the anime. It's still a great watch.

Rito Yuuki has his life change into a chaotic adventure after having an unexpected meeting with Lala Satalin Deviluke, a genius alien girl who is running from a marriage forced by her father - and unfortunately to questionable candidates. Due to a misunderstanding, Lala takes Rito as her fiance, and now Rito must face off against multiple alien foes who want to marry her. He also accidentally falls into boobs, panties, and gropes them by mistake.

What's Special About It

To Love-Ru feeds you a mixture of comedy, fanservice, adventure, and slice of life that is blended thoroughly and is pretty darned tasty, making a show filled with wall-to-wall fanservice refresh your love of harem. You can have moments where Rito is thinking seriously about his troubles, but when he falls into an unsurprisingly perverted moment, the series makes you laugh and not uncomfortably cringe. The dialogue is great because it's natural and gives a sense of logic to the adventure and ecchi moments. The cartoony visuals are perfect for a comedic ecchi show, because you get something that reminds you of the silliness of a cartoon like Tom and Jerry, so the fanservice seems more like comedy than actual plain fanservice. Sure, some of the perverted moments unexpectedly happen, giving the impression it may be forced, but the unexpectedness adds to the comedic effect. The adventure is fun, dramatic, and nicely executed despite much of it being humorous, and allows meaningful character growth that moves the plot along at a steady, consistent pace, rather than move along dully and without substance like other ecchi harem series. There is also a colorful variety of settings: space, jungle, school, and virtual reality, giving you something besides everyday settings like school and work, giving you more excitement.

What Else You May Love About It 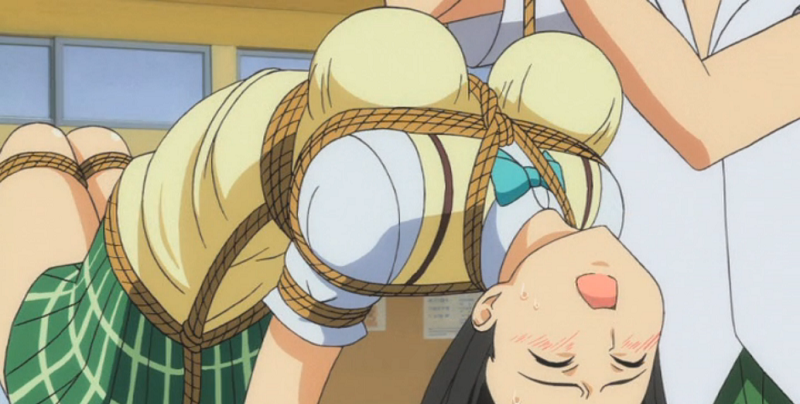 There is a breadth of characters that consistently appear throughout, giving you many different personas that contrast with each other and create events that are specific to that persona's character. This makes it so that at certain points the supporting characters get a main character spotlight and can obtain some good ol' character development.
The ending and opening themes are amazing. The opening theme images and direction coupled with a bright rock piece like "Forever We Can Make It!" gives it a zesty feeling, making you excited to go ahead and watch the first episode. Then you have the closing themes. The first is a very light and smooth piece, "Lucky Tune," coupled with the constant angle panning that doesn't fully show a bikini clad Lala; which makes me enchanted, and puts me in a euphoric, tranquil mood. And there is the other ending introduced in episode 14 with a nice song piece in "Kiss no Yukue," and visuals that provoke nostalgia reminiscent of first love. Since they seem so very nice, I'm sure I'm not the only one who will be overwhelmed with emotion by the opening and endings. Additionally, if you want more, you can get some more nostalgia since there are multiple references to other shows like Black Cat, Star Wars, Dragon Ball, and even Ultraman.
Oh, and the art and designs are fully integrated; nothing stands out, making it seem complete and consistent, which is great for a slice of life harem show, so it feels natural.

Let's face it: some people want fanservice. If you're that type of person, this show is for you. If you want comedy with your fanservice, then this show is for. If you want some common and uncommon character traits, then this show is for you. If you like adventure, then this show is sort of for you. So if any of those things relate to you, then you should watch To Love-Ru.
Also, if you just want to feel good after a long day and want to calm down and relax, you should watch this show; it's rather light-hearted, though with some intense moments. You will enjoy it - I guarantee.
Additionally, if you're the type of person who likes seeing the deeper meaning and parallels of things, or you're into this sort of show, in your free time you can analyze the characters and parallel them to real life issues and goings on, or read about it.

They're different in appearance, but similar as far as theme and setting go. Both have a clumsy male lead who gets into perverted situations. Both have a school setting, and in both shows otherworldly creatures visit and cause trouble for our male leads who take it on courageously. The difference is that the male lead in Sora No Otoshimono invests himself purposely in perverted situations, and it more blatantly invokes psychological themes. Also, it has a mysterious air to it since some things aren't explained until much later. So if you like harem, comedy, and mystery, you should give it a go.

High School DxD is also a harem show with a bunch of fanservice and otherworldly demonic creatures and buxom females. The difference is the male lead actually obtains powers to fight his enemies, and the fights are numerous, serious, and epic. This show is more of the shounen adventure brand, so the male lead gains power-ups, and there are group and tournament fight settings, so it's worthwhile if you're into shounen tournament-like things as I am. And if you watch it and can't get enough and need more, I suggest you read the light novel.

In this show, you have a normal male lead much like Rito Yuuki, battling mysterious otherworldly girls to add to his harem while also saving them from their own powers. There's less fanservice and it's geared toward the mystery of the origins of these girls and our male lead who can save them with his unknown power that is defensive in nature. Give it a try if you're into shows with male leads who fight courageously and increase the size of their harem.

It's another harem show, instead with an oblivious but courageous male lead. There are no otherworldly beings and it's more of a slice of life show with adventures added at times. Importantly, the show furthers its plot at a slow pace. The male lead wants to find the girl whom he promised to marry, and at points it seems as though there are multiple girls, and at others it seems like progress will be made, but then it evens out towards the climax. What the show gives you, however, is a bunch of different slice of life adventures, themes, and harem females. Watch it if you don't mind slow progress and just want to enjoy some slice of life harem misadventures featuring different cute females.