The debate over "part skipping" is a long and contentious one, but how do anime fans actually go about it? 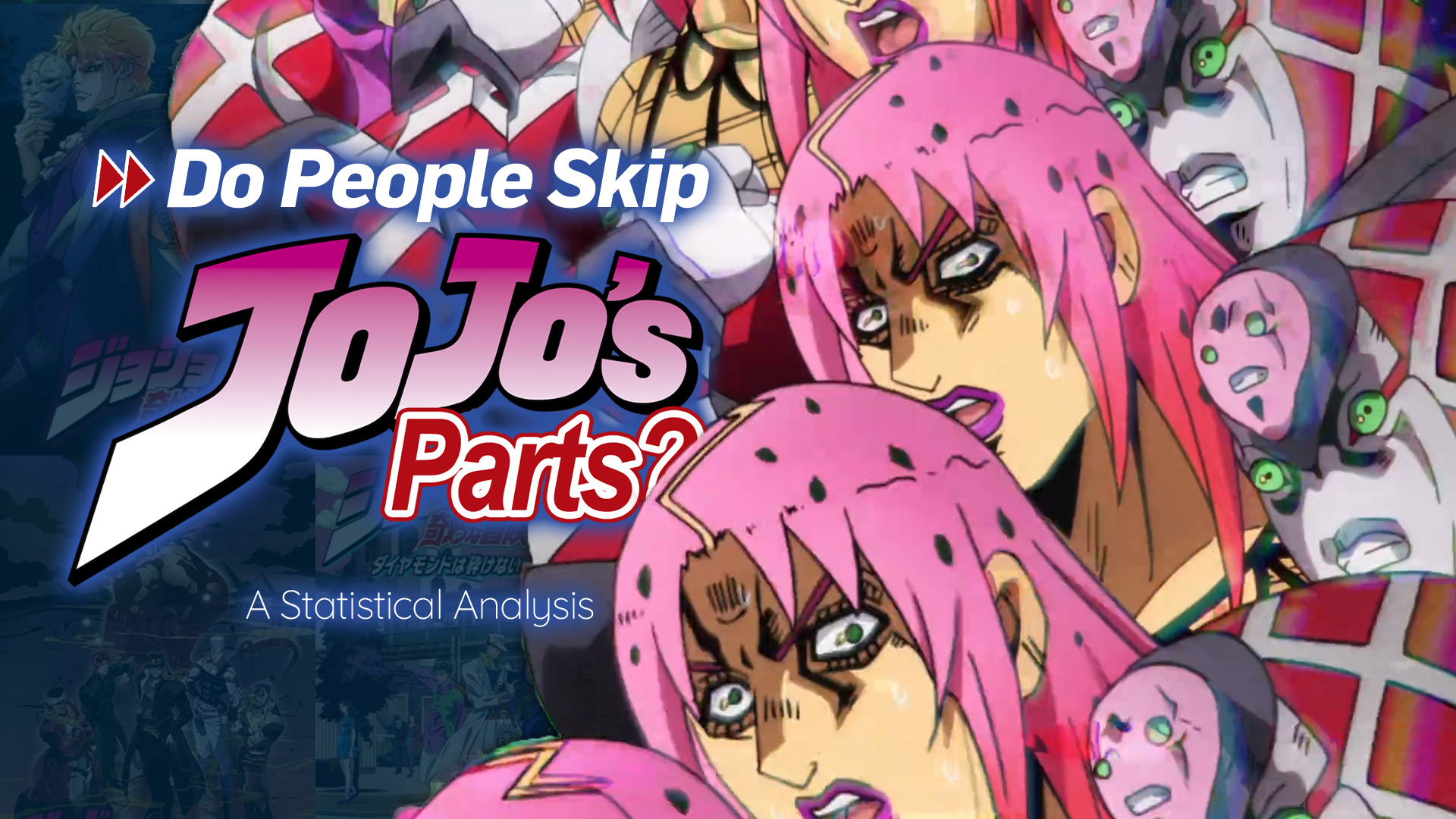 Anime fandom has a unique relationship with the concept of "watching orders." Webs of logos and text, chronological vs. broadcast, separate route adaptations... and skipping Parts. Among the fervent debates that have clouded Haruhi, Monogatari, and Fate for years, Hirohiko Araki and David Productions' JoJo no Kimyou na Bouken (JoJo's Bizarre Adventure) presents its own case with unique parameters—a series of chronological but separate stories, defined by its own titles.

After the most recent stirring discussion (and like/dislike ratio) on You Should (maybe) Skip JoJo Parts by Mother's Basement, I set out on a mission to answer two simple questions, utilising nearly 1,000,000 profiles on the world's largest anime listing site: Do people skip JoJo Parts? And how are they actually skipped?

It took a few months, but here are my findings.

For this analysis, I gathered a decade and a half of user data from 13 MyAnimeList database entries:

From these entries, I extracted five key pieces of data:

Altogether, it looks a little bit like this (sample from JoJo no Kimyou na Bouken (TV)):

Before we dive into the meat of the question, here's a grand overview of the data I'm working with and a few extra tidbits:

In a perfect world, all 997,473 users would still be active and using their lists consistently, but that's obviously not the case. However, the deliberate act of skipping is still there even if the exact combination of Parts isn't up-to-date with the actual person.

Like everything else, users overwhelmingly favour anime over manga, but there's still a number of dedicated fans who have completed both anime and manga for JoJo no Kimyou na Bouken, pictured in part below. 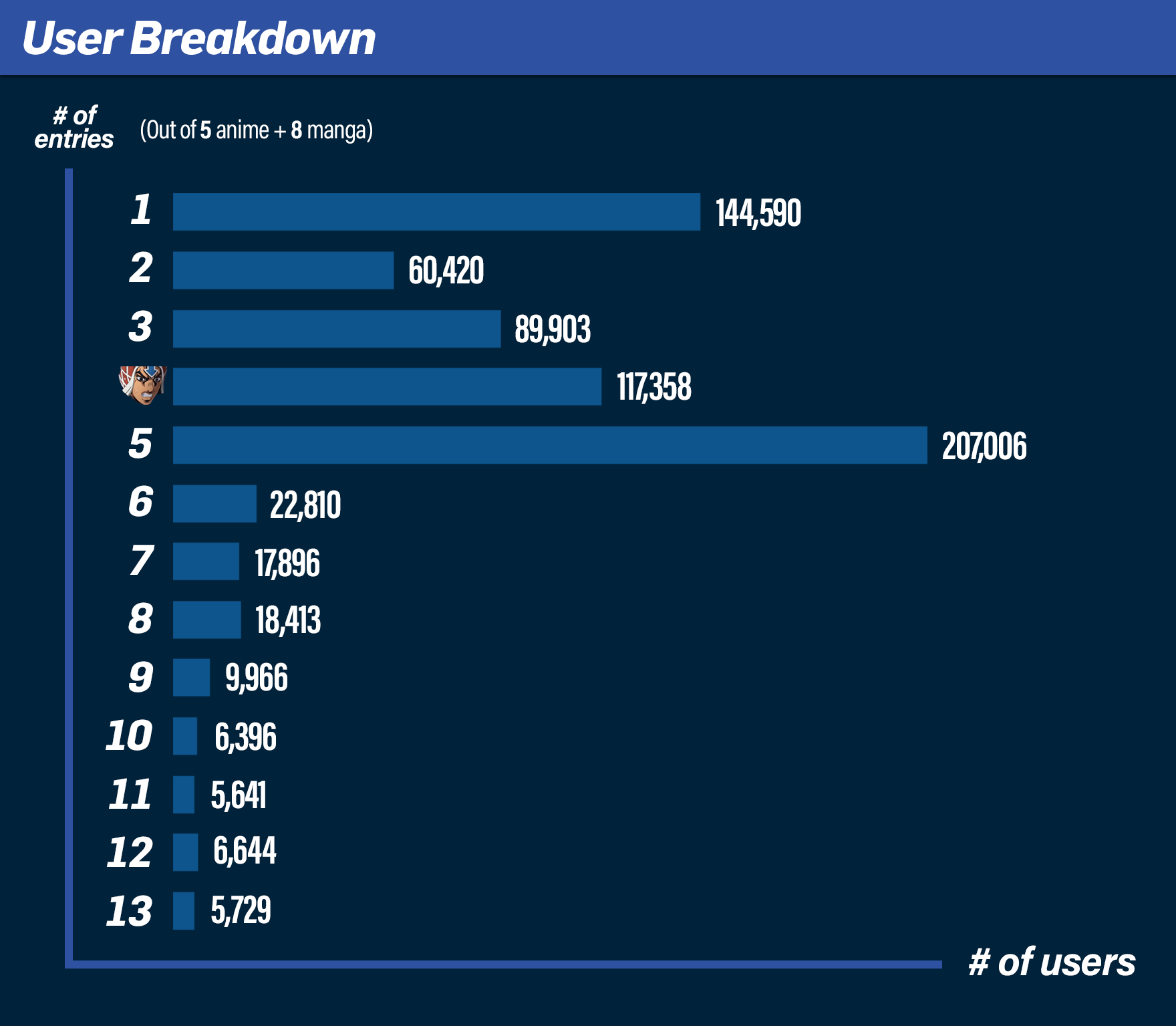 In case you're confused by the terminology: "Members" denotes the number of users with an entry on their anime or manga list, so this figure is the sum of every member type across all 13 mainline JoJo database entries. Here it is in a little more detail (this will be on the test later!): 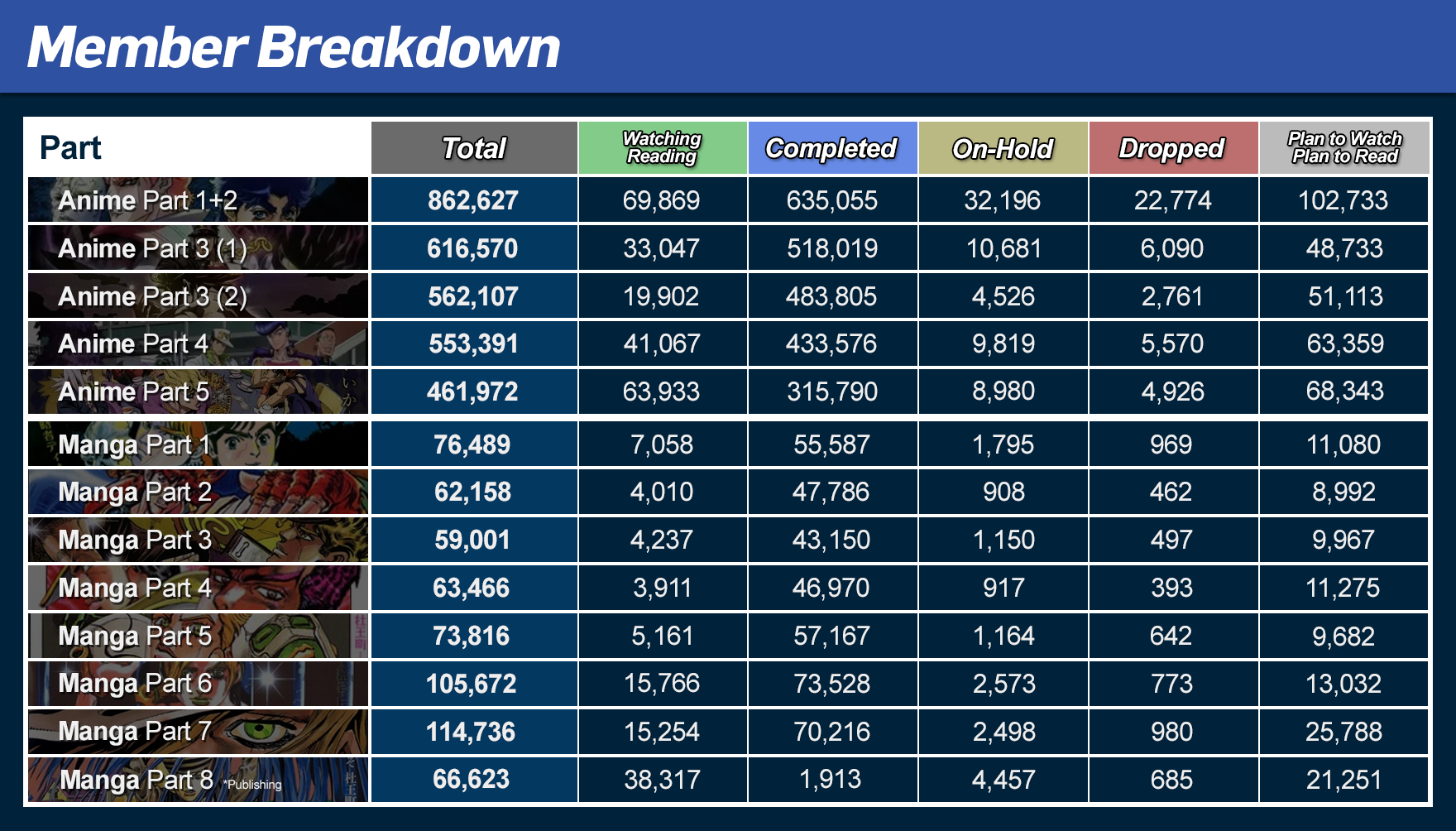 Excluding Part 8: JoJolion since it's currently ongoing, my focus was entirely on Completed members for gauging Part skipping. That way, I get a more reliable and exact measure of people who have gone through JoJo.

I think that's enough of a run-up, so let's cut to the Chase. 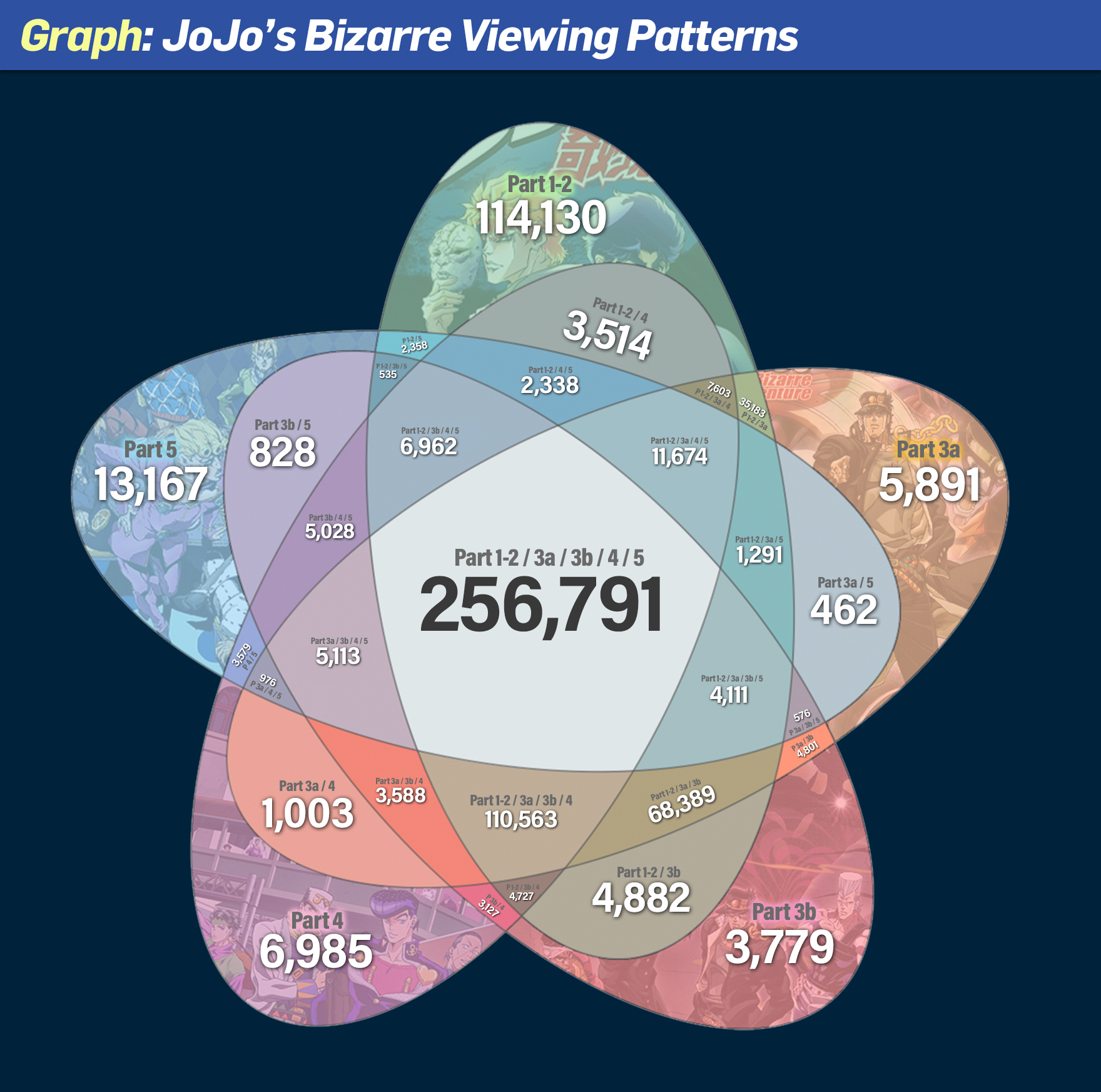 Or, to put it another way that doesn't require you to open a new tab and zoom in... 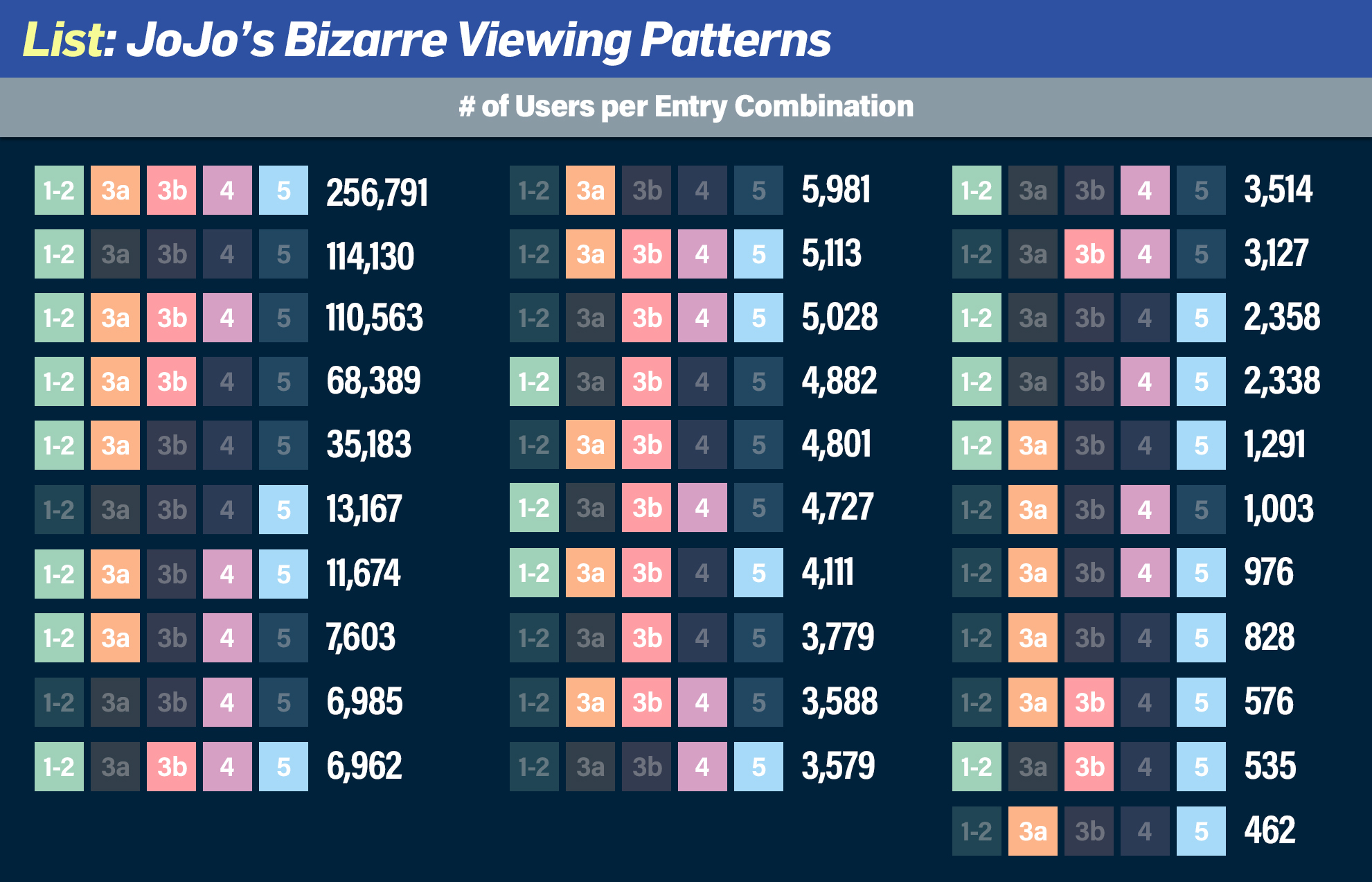 The "normal" ways of watching JoJo top the list of most popular combinations, but the first of the irregulars is skipping straight to and only watching Part 5: Ougon no Kaze. It's not too surprising since it's the most standalone Part of the bunch, but there are all kinds of possible reasons. One user I came across in my vetting process used a "Suwabe as cast" tag system, and had watched it just for Suwabe's role as Leone Abbacchio. Since there's only been a year and a bit to set Part 5: Ougon no Kaze as Completed, I would put more precedence on combinations that feature it.

The next few on the list embody the general trends of skipping Part 3: Stardust Crusaders, primarily not completing 2nd Season and returning in later Parts. In one user's case, it was because they were busy with school at the time and had already read the manga—there are all kinds of reasons people skip JoJo Parts.

Now, watching or not watching isn't the only purported method of skipping...

Like other franchises, JoJo is subject to Watch Order Discourse—by different measures, it's chronological and non-chronological. So the question is, which alternative orders are actually the most popular?

The data here is a little shakier and requires filtering to a much smaller sample size for two major reasons:

1. All Parts (with the possible exception of one) would need to have been completed after a user joined MAL; if they were completed beforehand, they would be added to their list upon joining and register the exact same date. But considering the size and age of MAL's userbase, this isn't as big of an issue as it seems.
‎2. The reason I also pulled Total Times Re-watched Series data is because, if someone uses MAL's rewatch system for their episode count, it changes the Episode Updated Date but still registers as Completed. So to be safe, Total Times Re-watched Series has to equal 0 and Completed Episodes has to equal the full episode count of each entry.

When we take that criteria into account, we're still left with 56,930 users out of a possible 256,791 who have every anime JoJo Part set as Completed. It's certainly a step down from nearly 1,000,000 users in this analysis, but it's by no means insignificant and it's more than enough for an effective sample size.

So without further ado, here is an overview of all the Crazy, Noisy, and Bizarre watching orders of JoJo no Kimyou na Bouken: 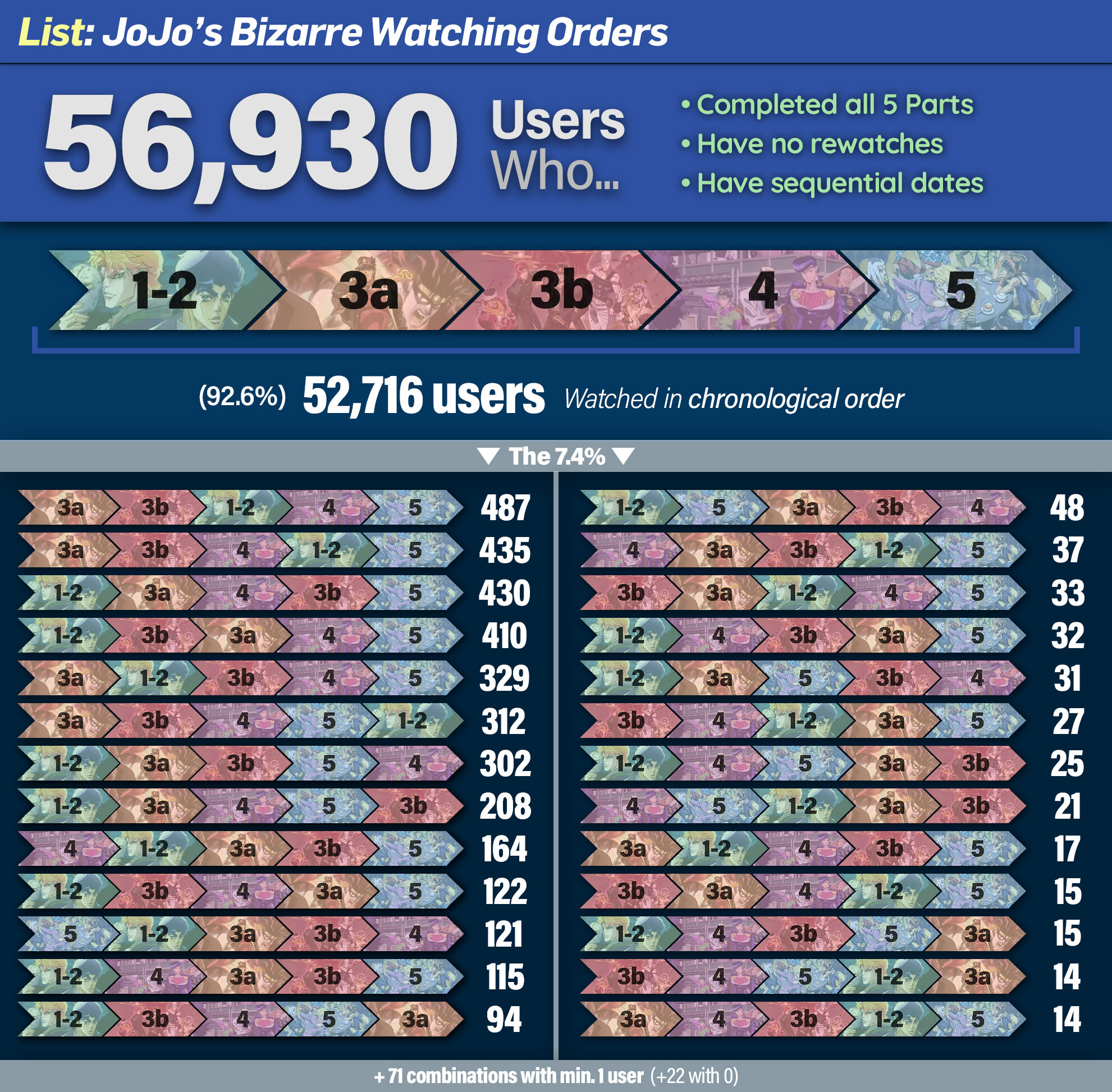 Geoff Thew's Basement Order (23:20 in the aforementioned video that inspired this article) splits the first season into two separate parts, so I unfortunately can't find out exactly how many users have watched JoJo that way.

However, if I assume the split Parts as the whole season in both instances and look at just the anime section, I can confirm:

This is not a put-down of that watching order—the mere existence of these super specific combinations in our narrowed scope of valid data makes me absolutely ecstatic.

The discourse around JoJo Part skipping is primarily centred around the five seasons of the anime, but there's another pattern that we can observe from the data at hand—the transition from anime to manga; skipping ahead, so to speak. Because if you've already watched the well-adapted anime, and Parts are nicely segmented, why go all the way back to the start?

I don't have to dig deep into the backend to show the unordered mess of manga popularity figures: if you glance over the Member Breakdown, you'll see that MAL users got drunk and counted 6, 7, 5, 1, 2, 4, 3 (by Completed members). And much of that is due to transitioning directly from anime to the original manga.

We can see a history of exponential growth in completing the manga before the anime adaptation, without even needing to go into the next in the list to be adapted—Part 6: Stone Ocean. (plz)

However, I'm here to answer a more specific query—how often people jump directly into the next Part of the manga, after they complete the previous Part's anime adaptation and before they complete that next Part's own anime (if it exists): 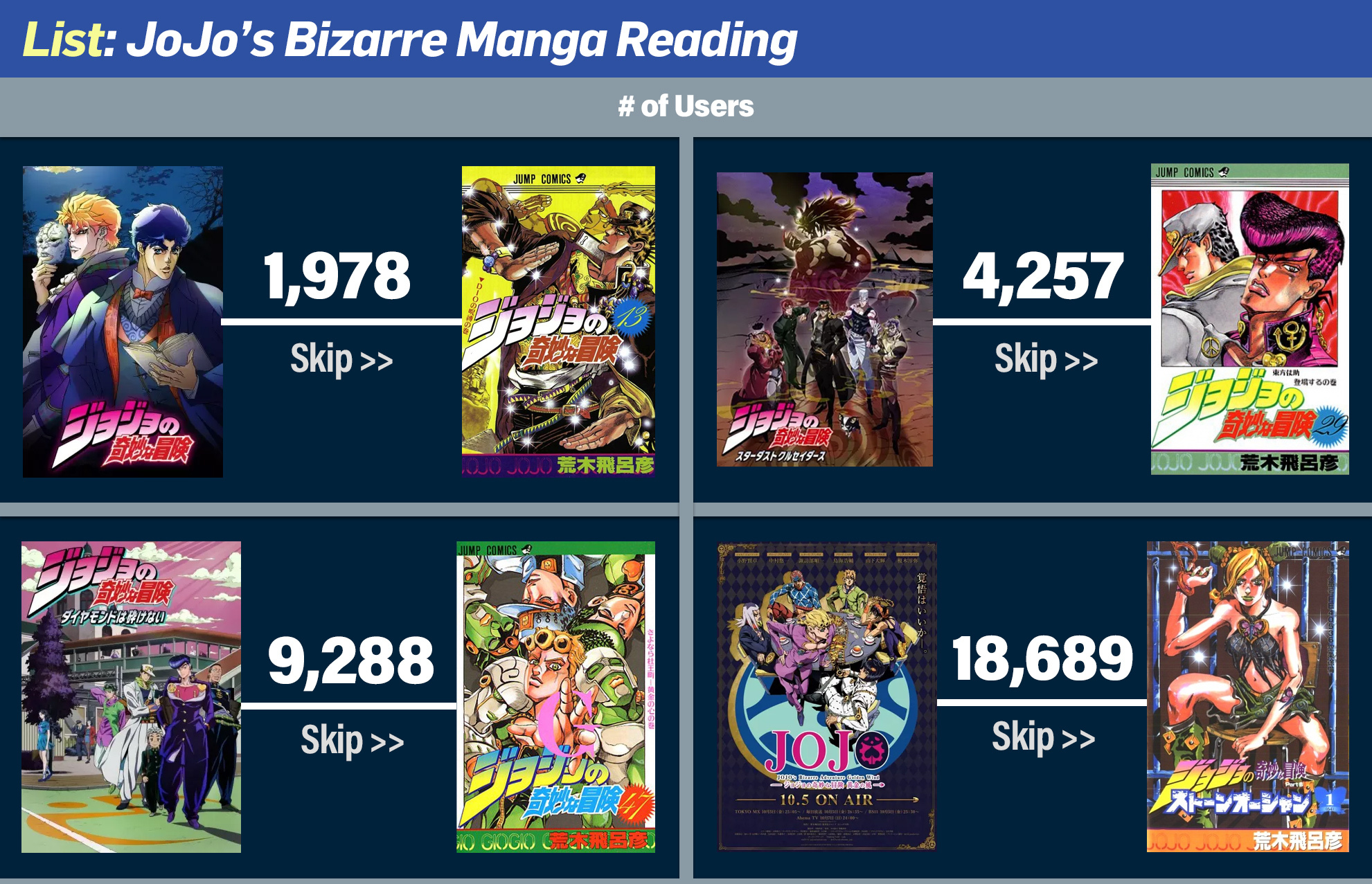 Here, we can see that the direct jump from anime to the next manga Part with Part 5: Ougon no Kaze to Part 6: Stone Ocean already far outstrips any other instance. Lack of hope for an anime adaptation, or just enthusiasm for Araki's first female protagonist?

Lastly, there's also a case for skipping to Part 7: Steel Ball Run over Part 6 because of its high score (#2 manga of all time on MAL)—most completed Part 6 first, but there's still a sizeable chunk of users who completed Part 7 but not Part 6: 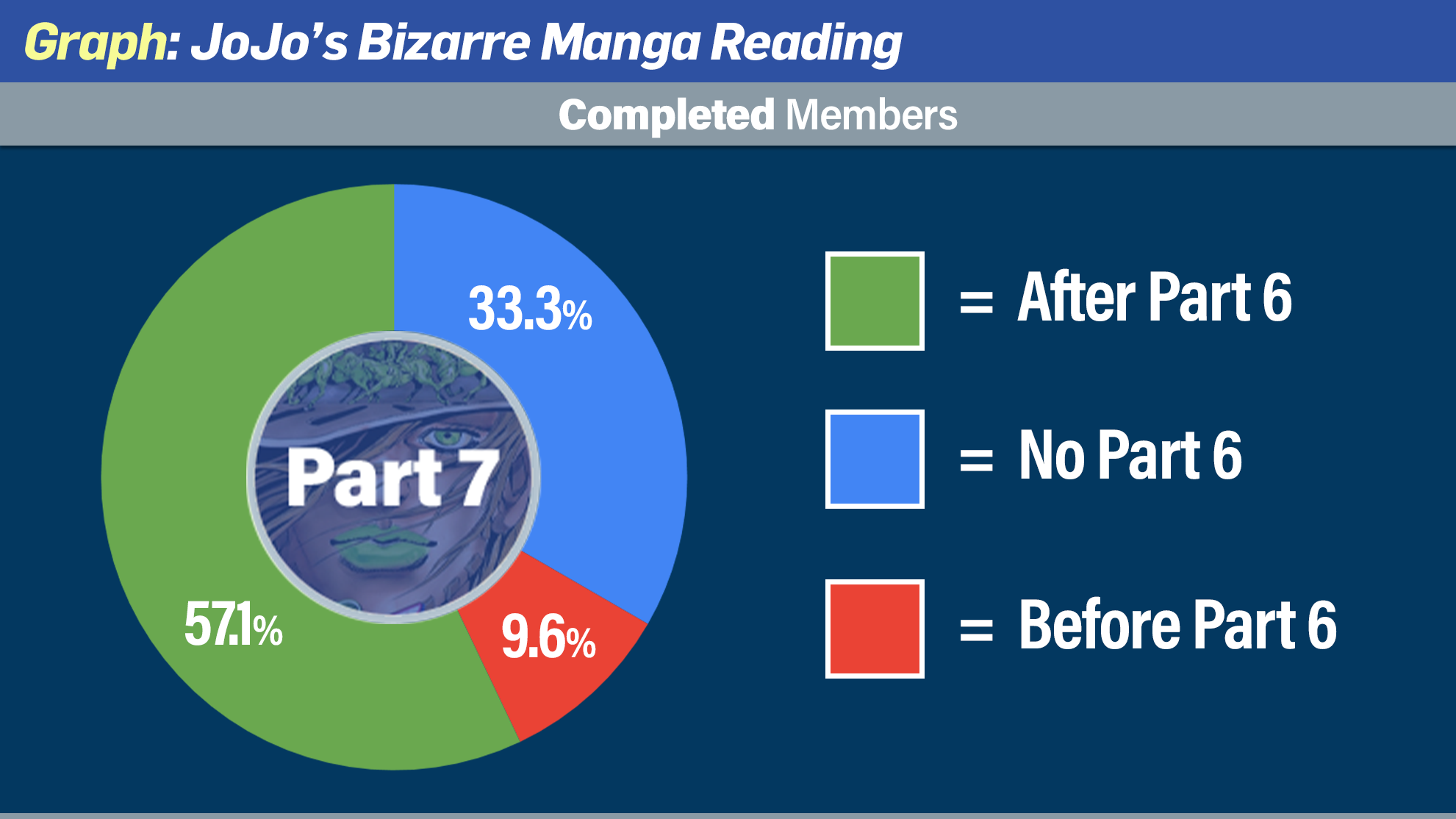 While I'm here with a frankly absurd amount of data, I may as well round this out with one last statistic—at which episodes JoJo Parts are Dropped the most. This excludes (obviously) the final episode and any set as 0 (which many users do). 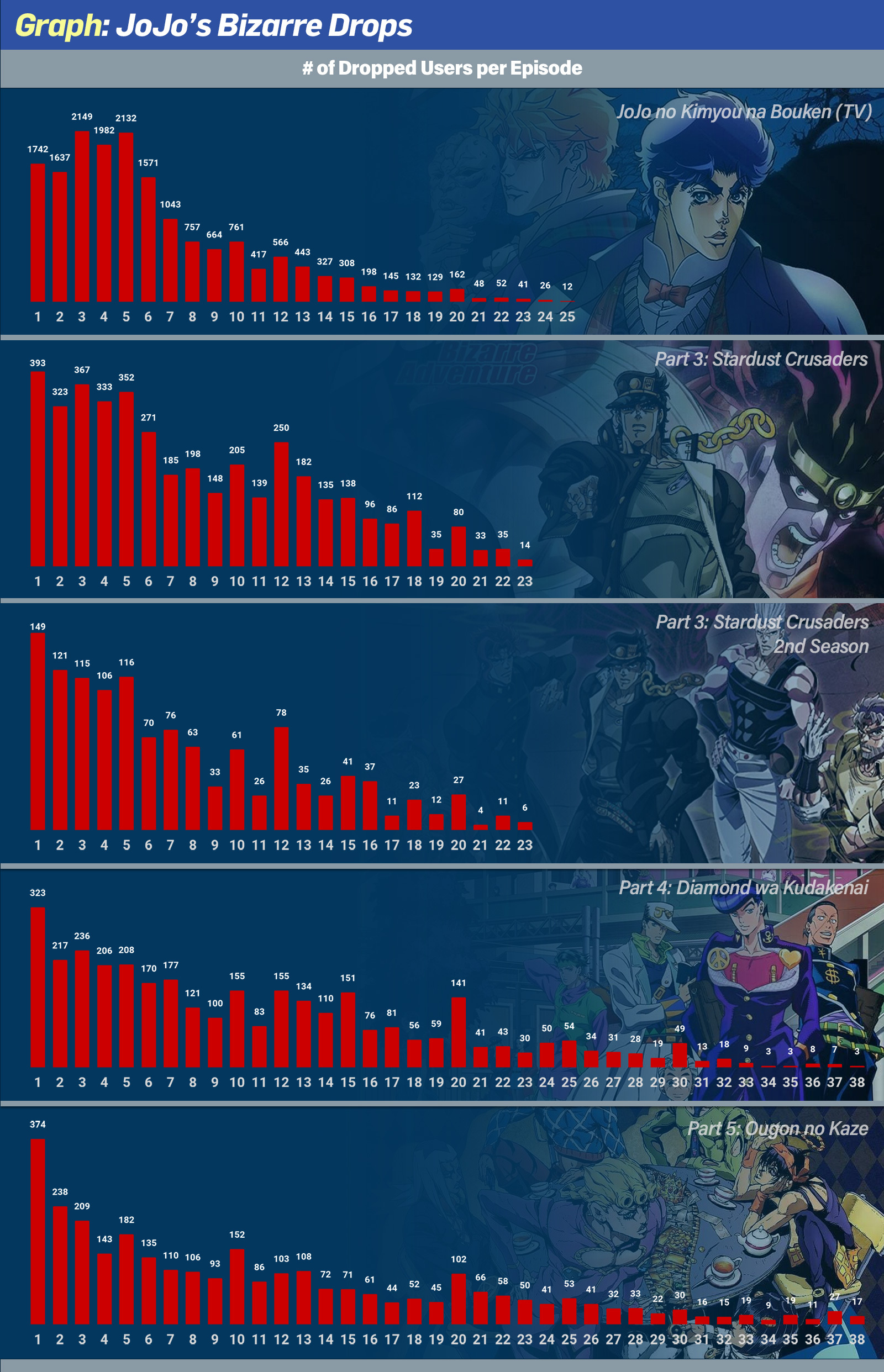 Thanks for reading! If you have any comments or want to know how many users watched all of JoJo in a certain super specific order, don't be afraid to hit me up on my MAL profile or Twitter.